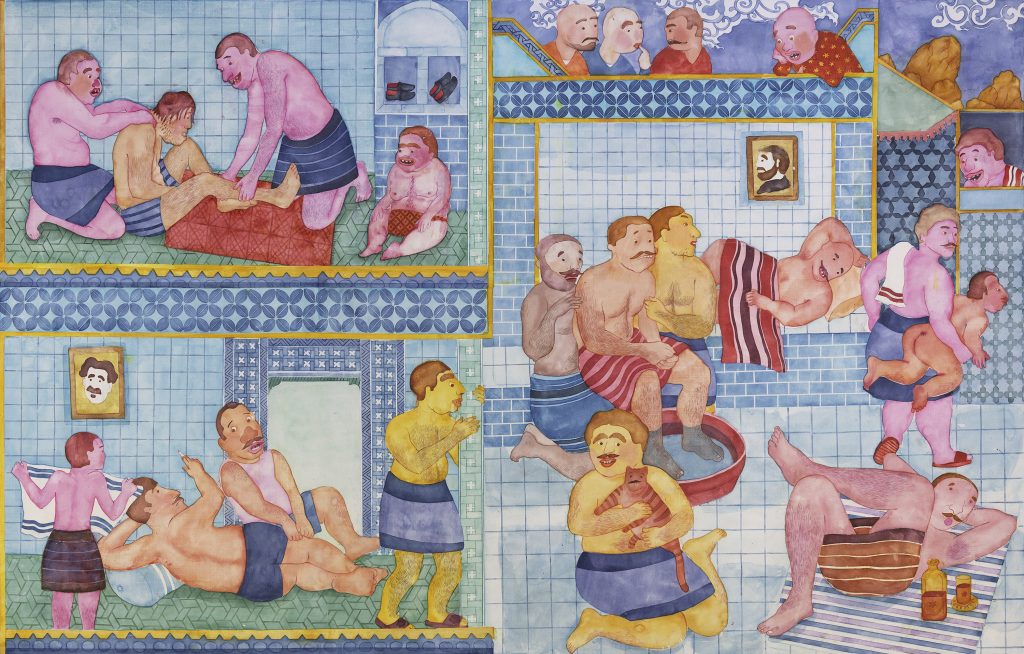 The Museum of Contemporary Art Chicago continues its Atrium Project series with work by the Iranian-born, Chicago-based artist Orkideh Torabi, entitled “Peach House’s 5 Bucks Morning Special.” It uses dye on cotton fabric, which is then transferred to vinyl. The piece depicts a men-only public bathhouse,  a representation of male characters in a traditional cultural context at several times larger than life-size.

Torabi has for many years created unique artworks inspired by the traditional elements and scene-setting concepts of Persian miniature. She uses techniques of Persian miniature that enable her to show both the interior and exterior spaces simultaneously. This allows her to become a set of eyes positioned outside, as if on a rooftop, directing their gaze inside, into the bathhouse. The exterior backgrounds feature clouds, skies and mountains similar to Persian miniature, while the interior space is filled with a range of blue hues and shapes inspired by mosaics and geometrical forms of Persian architecture and painting. The larger frame is divided into several smaller two-dimensional rectangles encompassing the figures.

Benefiting from a painting style long popular in the Persian culture–as seen in the noted painting “Harun al-Rashid in the Bathhouse,” by the Persian painter Kamal ud-Din Behzad—she uses humor to show her figures while they are occupied with different bathing rituals, including massaging one another.

Semi-naked male figures, covering themselves with the traditional long cloth, are depicted as adults and kids, always with masculine features, beards and mustaches and body hair. They look like cartoon characters, sometimes lying around and relaxing, other times chatting with others or carrying one another. In the details, we see a cat, legs soaking in a bucket of water, as well as framed portraits of men on the walls. The title of the piece, “Peach House,” plays on young women being considered attractive while at the same time being disregarded in Persian folk culture. In Orkideh Torabi’s feminist world, the erasure of women from the scene and their being replaced by male characters turns into a sarcastic depiction of prevalent power structures. Influenced by Chimamanda Ngozi Adichie, Torabi believes that society has ingrained in us a culture full of wrong categorizations and separations of men and women.

In Torabi’s works, women are not painted as victims, and there is no surface-level bitterness or darkness. Instead, her cartoonish style is aimed at challenging social structures of gender segregation.

One of the works deeply informing Torabi’s style is “Aja’ib al-Makhluqat wa Ghara’ib al-Mawjudat” (The Wonders of Creation and Oddities of Creatures), a book dating back to the thirteenth century A.D., which is full of lithographs of Persian-style illustrations. This has led to her working with various print techniques, including gelatin, batik, silk and monoprint.

“Peach House’s 5 Bucks Morning Special” follows the traditional elements of Persian painting and is in conversation with Persian folklore literature. Filled with social humor and sarcasm, the piece looks like a comic strip with no text, a modern version of “Aja’ib al-Makhluqat” come to life based off of a masculine utopia and an implied feminism. (Afsaneh Akhoondi)

“Peach House’s 5 Bucks Morning Special” is on view at the Museum of Contemporary Art Chicago, 220 East Chicago, through January 2, 2022.