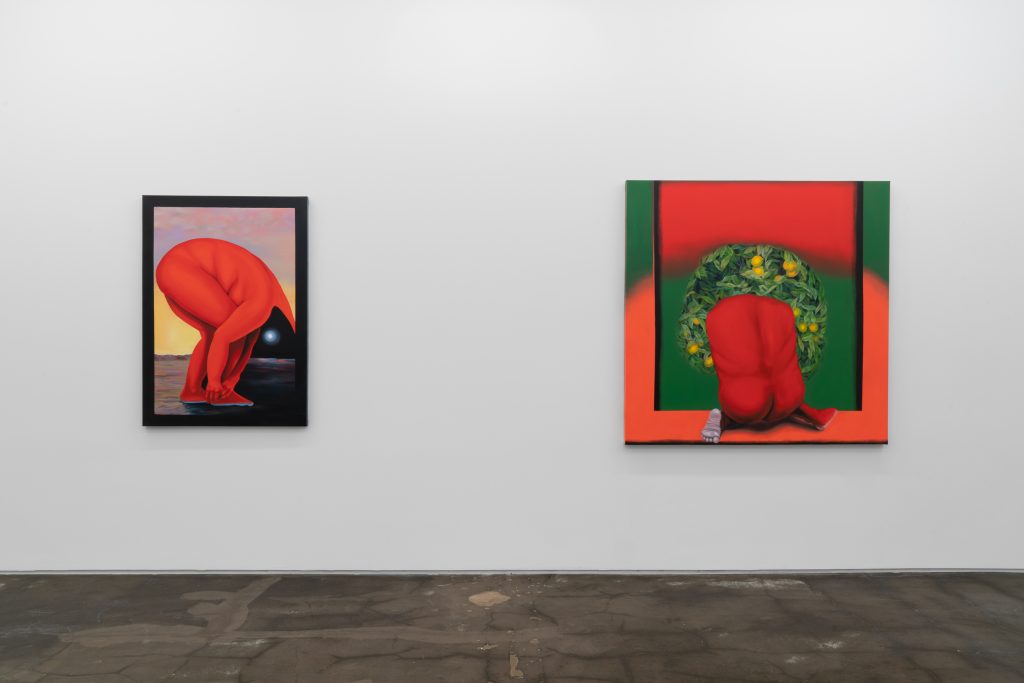 Brittney Leeanne Williams, “How Far Between and Back,” April 24- June 12/Courtesy of the artist and Monique Meloche Gallery

The color red has been known to bring out the strongest emotion in humans. It is linked to passion, anger and power. Brittney Leeanne Williams’ latest show at Monique Meloche Gallery provokes all these feelings through “How Far Between and Back” which is on view until June 12.

During her first solo exhibition with the gallery, Williams gives the viewer a body of abstract works concentrating on the female body and the roles the female body holds. Williams depicts silhouettes that aren’t specific, but familiar in regard to the curves on each canvas. The bodies are centralized in the works that create a different understanding of the body, specifically the female body, as they bend and twist into themselves.

Williams demystifies the fragility of how a woman’s body is often understood by placing strong bodies in vulnerable poses while grounding them in the center of the pieces. “Heel,” from 2021, features the silhouette bent over at the hips, paying attention to their heel. Williams uses oil on canvas to reveal the depth and strength, from the thighs to the folds in the stomach. The artist pays homage to her California roots through the color red, which adds a personal touch to the abstract forms.

In Complementary Prayer,” (2021) Williams emphasizes the robustness of the back. She creates dimension by exploring the emotional turmoil that the Black body goes through. The bright red figure sits in isolation, with their legs crossed while shifting their body forward into a lemon bush. The abstract landscape of black and red pigments blends into the figure, allowing the body to exist in duality as an extension of the landscape. The red pigment of the body echoes a siren drawing the viewer in. The psychological impact that Williams creates does not go unnoticed with the curvature of the figure echoing a closed-off nature. Psychologically the figure’s crossed legs reveal that the figure is mentally and emotionally blocked off. 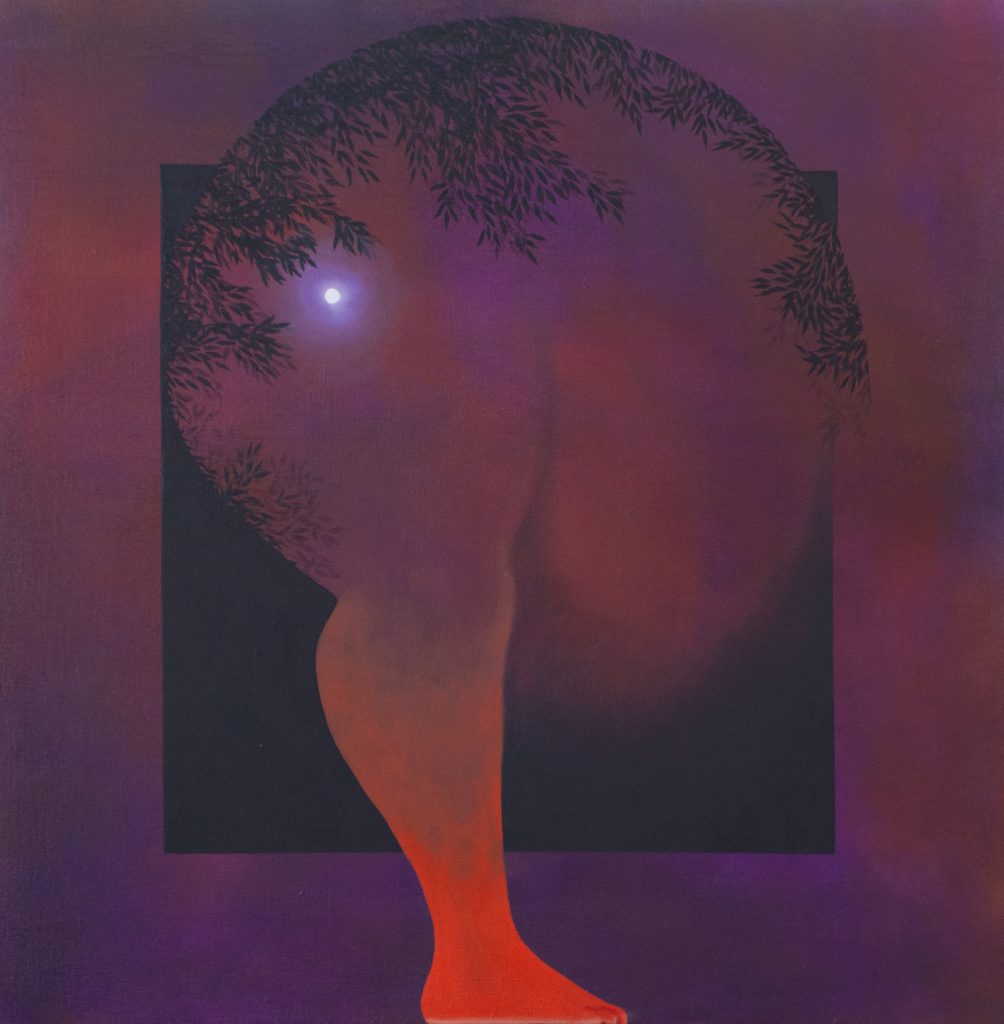 Throughout each canvas, Williams transforms the nude. The female nude in history has dehumanized the female and allowed viewers to gaze without guilt. As we gaze upon these female nudes, it is juxtaposed with the emotional response to the color red and taps into an intimate understanding that the viewer has with the female body.

Red is the most visible color on the spectrum due to its ability to instantly grab attention, similar to how Western society instantly gravitates toward the female body. In “The Break of a Curse,” (2021) we can see these two concepts as the female nude sits on the ground as part of their body leaves them in an abstract, ghostly form. The central placement of the moment, which takes up most of the canvas, forces you to take in the body. Each figure exists in abstract isolation which calls upon the psychological foundation of each body and what that means to be a woman in our Western society. 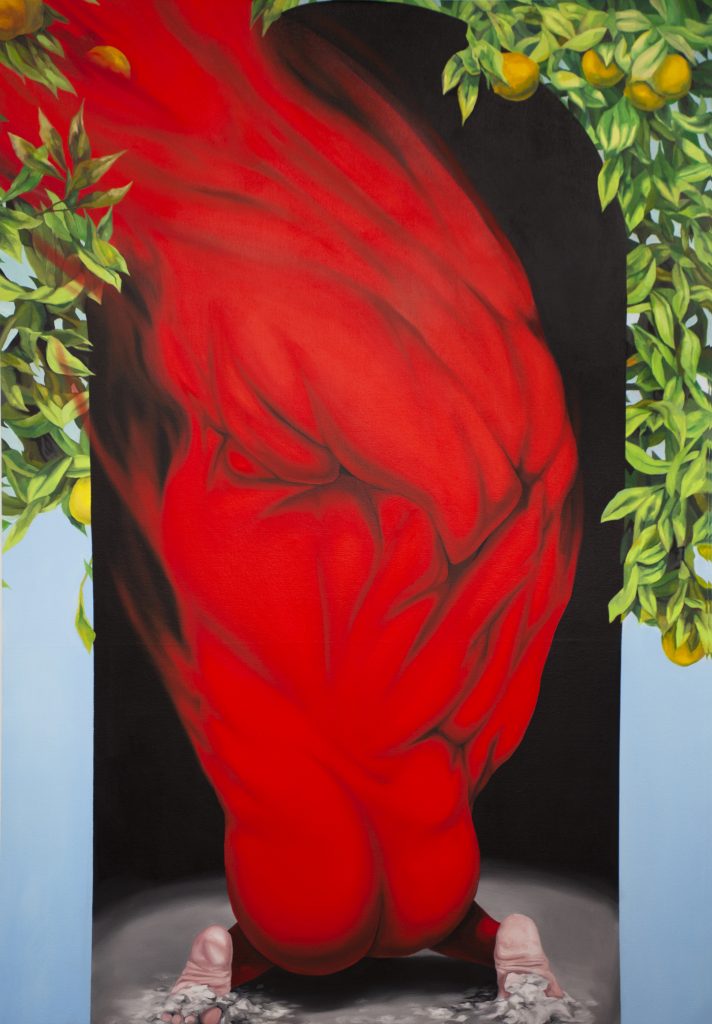 Brittney Leeanne Wiliams, “The Break of a Curse,” 2021, oil on canvas, 60 x 42 inches/Courtesy of the artist and Monique Meloche Gallery

Contrary to many female nudes in the Western art history canon, Williams challenges the passive nature of this genre. She roots her figures on the grounds of the canvas, adding abstract elements that do not allow the viewer to simply gaze but forces them to think and interact with the female body in contrast to the typical female nude, which was positioned in a passive stance. The female nude historically is supposed to allow us to gaze without guilt and without interruption. Williams breaks the fourth wall by forcing the viewer to be alert, from the color choice to the scale of the body to the canvas. (Caira Moreira-Brown)

“Brittney Leanne Williams: How Far Between and Back,” Monique Meloche, 451 North Paulina, through June 12.