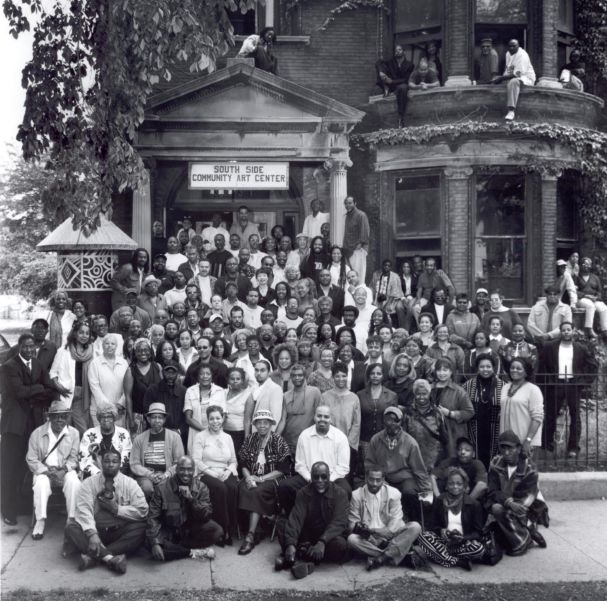 On the near South Side of Chicago, on the 3800 block of South Michigan Avenue in the historic Bronzeville neighborhood, is a beautiful Classical Revival building that, for just over eighty years, has housed a community-based organization dedicated specifically to Black artists: the South Side Community Art Center. The artist, curator and former executive director Faheem Majeed describes the Center as a microcosm of the Black art world and of Chicago’s South Side. For eight decades, this art center has championed the work of African American artists while serving as a gathering space for not only artists, but the broader South Side community. It’s a legacy that continues, with recent exhibitions featuring emerging and mid-career artists such as David Leggett, Krista Thompson and James T. Green, as well as Majeed. 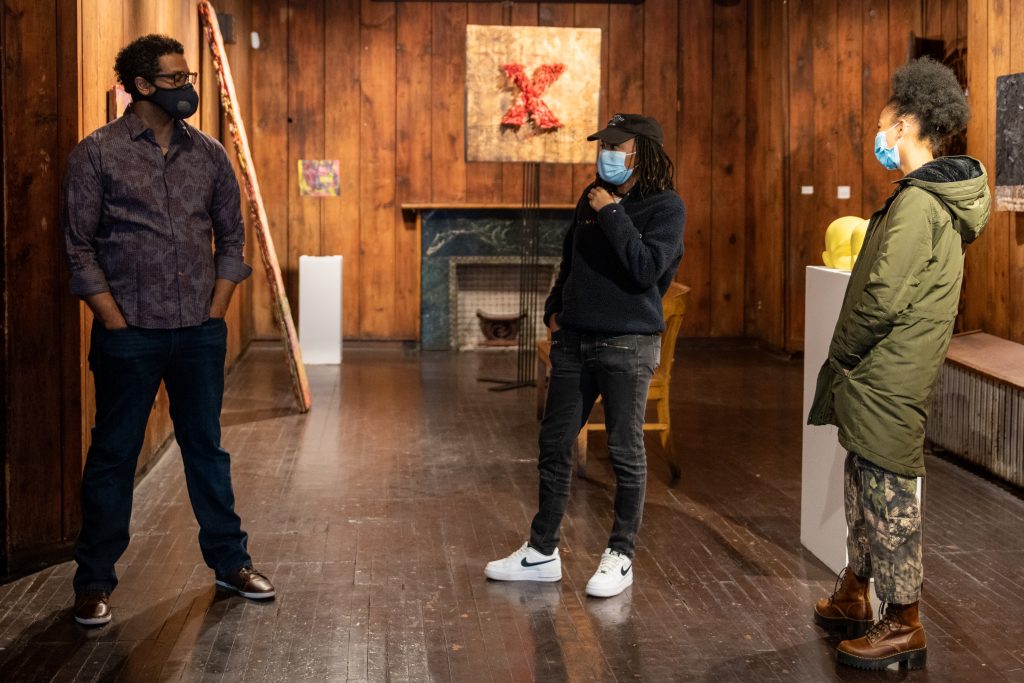 The organization came into being through the same dedicated belief in these artists that has kept it going all these years. In the late 1930s, a group of artists, gallerists and art enthusiasts came together to create an institution that would support Black artists on Chicago’s South Side. This founding group chose to collaborate with the Community Art Center initiative of the Federal Art Project (FAP), one of the many programs that grew out of the Works Project Administration—the federal New Deal agency established to help citizens and communities throughout the United States recover from the Great Depression. The FAP funded part of the renovations and the salaries of the Center’s first staff, but it was up to the organizers and the community to raise the money needed to purchase the building that would give the Center the stability that has enabled it to weather eighty years of change. The South Side Community Art Center is the only FAP-funded art center still operating in its original location. 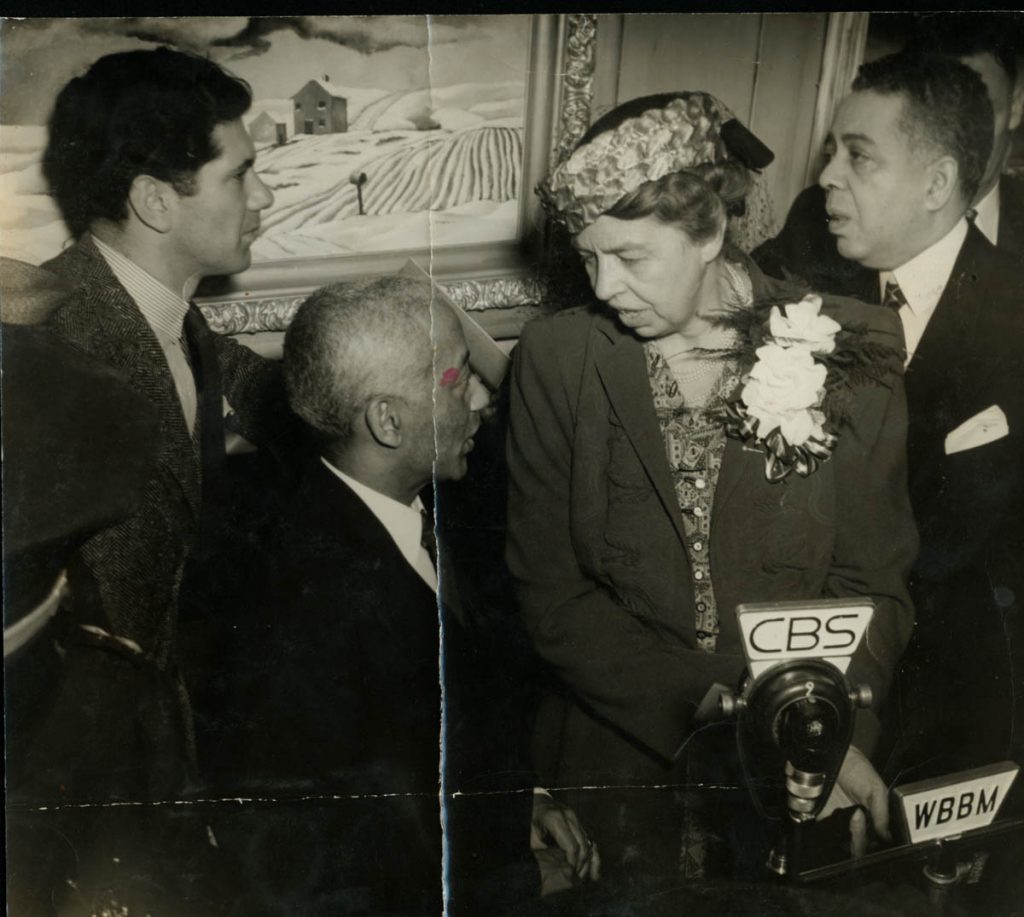 Fundraising began in 1938 and was supported by community leaders and local businesses, and was bolstered by the philanthropic efforts of women’s organizations, especially middle-class Black women. The successful fundraising from major donors to people on the street proved the community’s support of the project. In 1940, the South Side Community Art Center was opened and people were welcomed into the renovated building. In 1941, then-First Lady Eleanor Roosevelt, a major supporter of the arts, would cut the ribbon for the official dedication of the building as the site of the Center. Though federal support would end two years later, the South Side Community Art Center resides in that same building, designated a historic landmark by the city and a National Treasure by the National Trust for Historic Preservation and placed on the National Register of Historic Places. It still actively provides space for emerging artists to experiment, collaborate and learn their history. 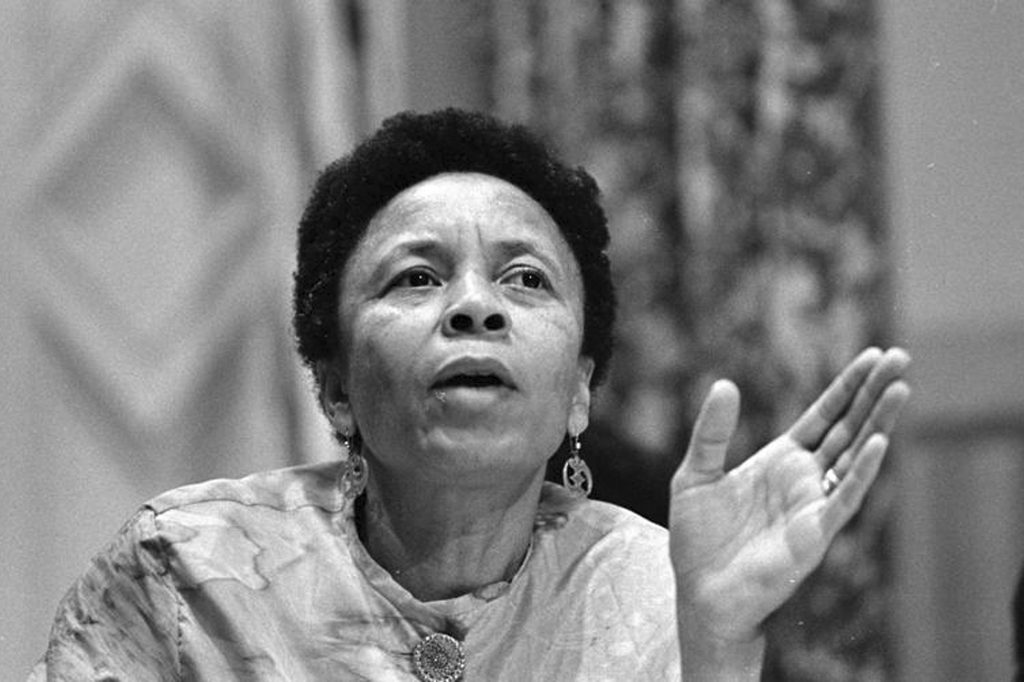 The most recognized founder was visual artist and educator Dr. Margaret Taylor-Burroughs. She was in her early twenties when and the other founding members started the Center. So deep was her investment in the South Side Community Art Center that her contributions would extend to collecting funds on street corners, assisting with the physical labor of readying the space, as well as teaching and exhibiting her artwork. Also the founder of the DuSable Museum, Taylor-Burroughs set the stage for African American visual art education and an artist-driven scene that is active to this day. 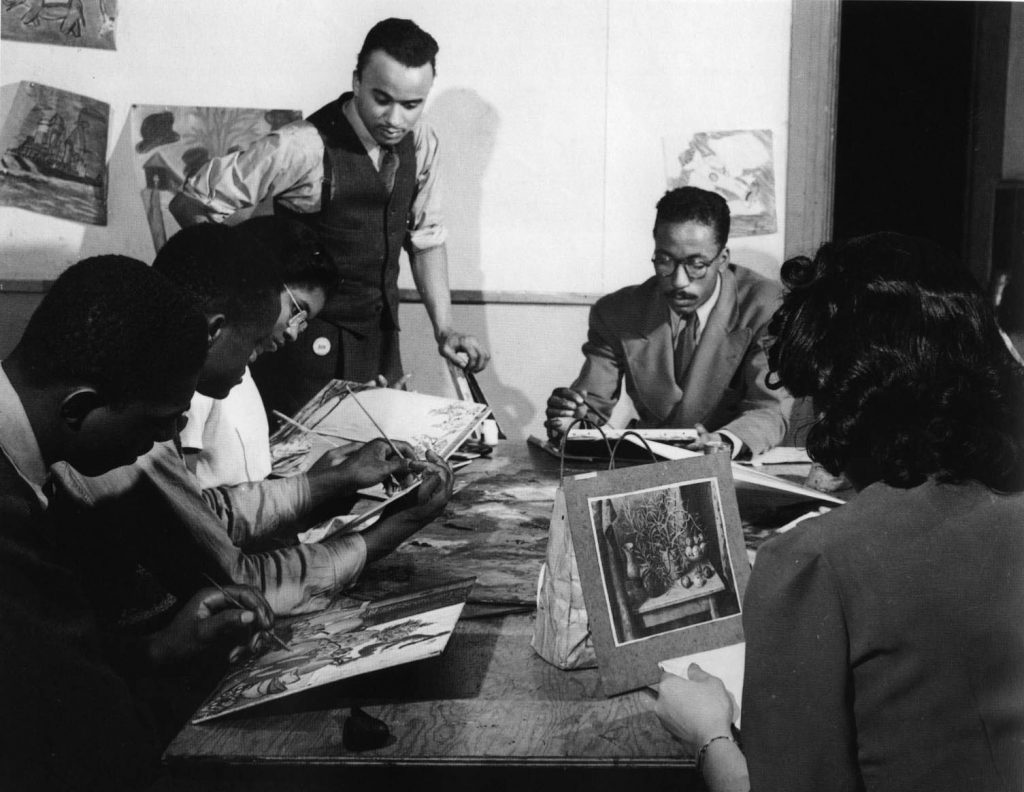 The South Side Community Art Center has been a key force in African American art as an incubator for many artists who would go on to define African American visual arts production. When lists are made of the great African American artists of the twentieth century, several key figures always appear: Elizabeth Catlett,  Gordon Parks, and founding members Archibald Motley and Charles White. These artists, along with locally renowned Chicago art luminaries and fellow founding members Eldzier Corter, William Carter, and Joseph Kersey, were part of the community that taught classes, learned from their peers, and exhibited at the Center in their formative years. White created many of the early works included in the “Charles White: A Retrospective,” a major traveling exhibition that opened at the Art Institute in 2018, during his time at the Center. Catlett developed and exhibited her linoleum prints alongside those of Taylor-Burroughs at the Center. It was work done through the South Side Community Art Center and his contacts there that would lead to Parks being awarded the Rosenwald Fellowship, which set the trajectory for the rest of his career. 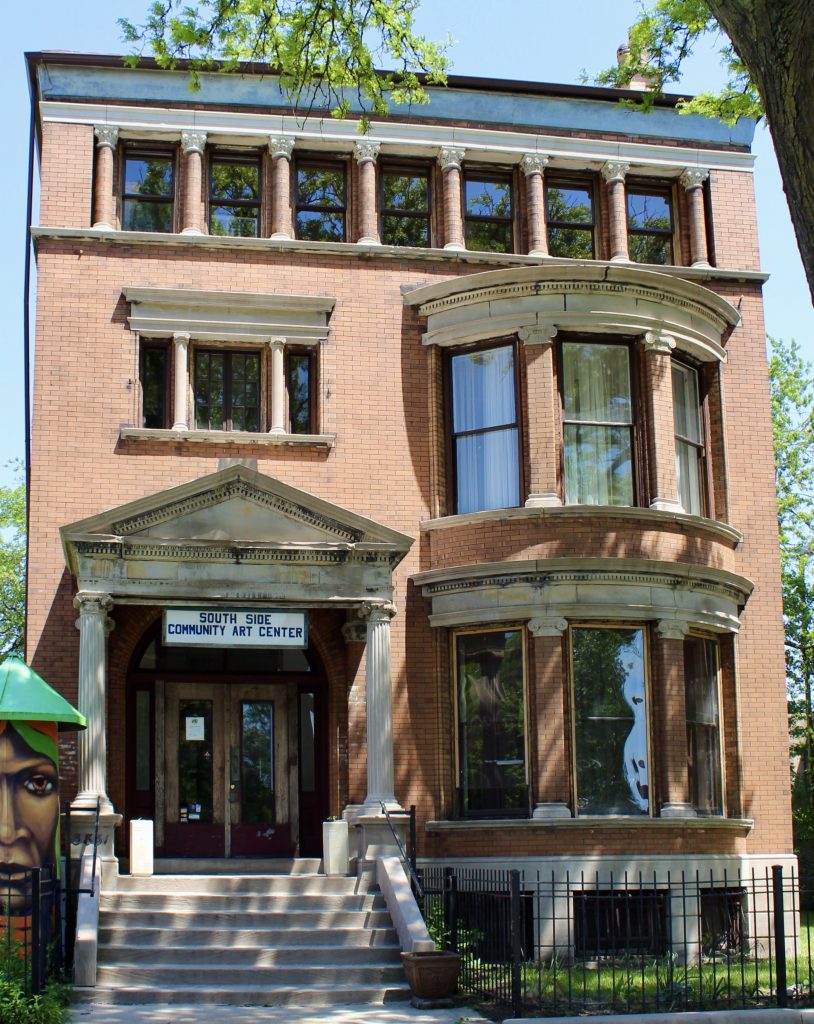 The building is a unique space. Unlike the white box gallery that most art patrons are used to, the Center’s exhibition space has wide, wooden plank walls and dark, chocolate-colored floors. The walls cannot be repaired and made to look unused between exhibitions. Instead, the walls show the history of the art that has been hung there. When a young artist in the twenty-first century sees their work hanging in this space, they know that the nails holding it up might be in the same hole a nail was placed to show paintings by Motley or a drawing by White. This unique design is the serendipitous result of another piece of Chicago cultural history, the founding of The Institute of Design in 1937 by German immigrant and Bauhaus member László Moholy-Nagy. Two of the members of the New Bauhaus school, Hin Bredendieck and Nathan Lerner, reportedly working through the Works Progress Administration, designed the Center’s gallery space in the school’s unconventional style. 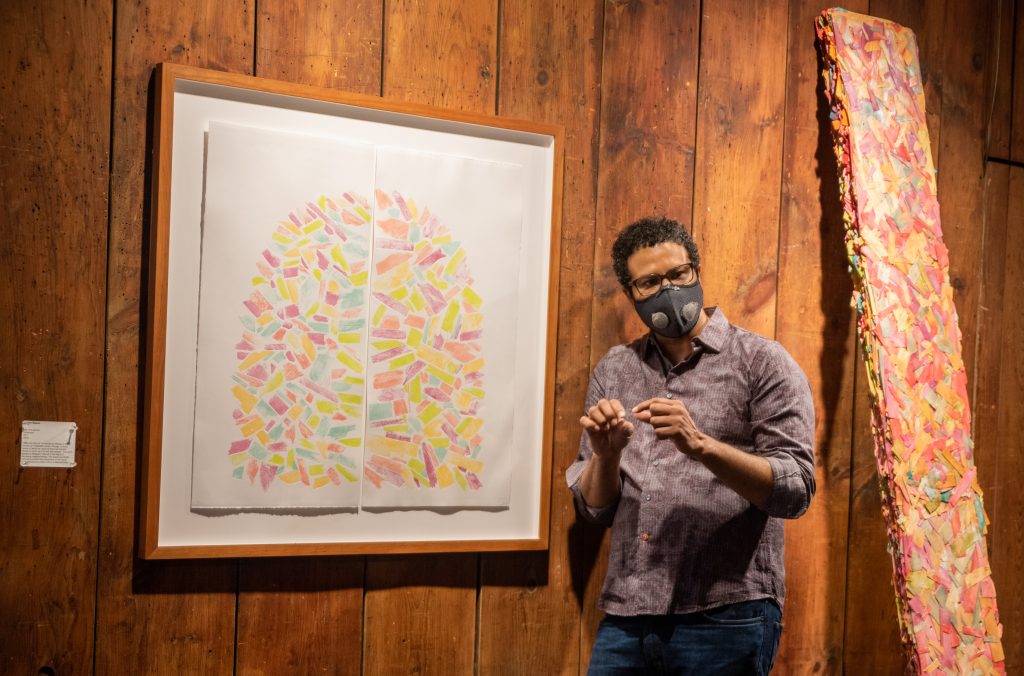 Faheem Majeed at his exhibition, “From the Center,” 2021/Photo: Abena Sharon

Majeed, whose passion for the Center is contagious, speaks about the opportunities that the South Side Community Art Center has provided him over his seventeen-year relationship with the organization. He speaks the most eloquently about the intergenerational knowledge that has been shared with him and other young artists when they spend time at the Center and join its decades-long legacy. He calls it “a living institution that connects the future to the past.” This is central to the ethos that has been a part of the institution since its inception. It is a community center based around art, not a museum. It is designed to allow learning through art and gathering and to serve the needs of local artists, but also to ensure that the community is served by art.

Zakkiyyah Najeebah Dumas-O’Neal is the organization’s manager of public engagement, who in the way of small institutions also does public relations work and curation at the Center. She is excited about the breadth of exhibitions and programs that are planned, which she hopes will bring more artists and cultural workers into the facility and create more opportunities to collaborate with other Chicago arts organizations. This includes artist talks, classes and three exhibitions: “Just Above My Wall” curated by Ciera Mckissick, will run through the end of June; a Whitfield Lovell solo exhibition in the summer, in collaboration with Smart Museum and in conjunction with the fortieth anniversary of the MacArthur Fellows Program; and the year wraps up with a Black Women’s Art Collective curated by artist Kyrin Hobson. Her work will help a new generation of artists at the same age and stage in their careers as their now-famous forebears were when they were part of the South Side Community Art Center. The Center will also take part in the Terra Foundation’s Re-Envisioning Permanent Collections grant program, with the forthcoming exhibition “Love is Universal.” The exhibition will examine the intersections of Chicago’s LGBTQ and Black art histories, focusing “primarily on the Black gay male artists who were closely connected with the center between its founding in 1940 and into the 1980s,” according to the Terra Foundation.

A rising artist on the Chicago scene herself (she was a 2019 Newcity Breakout Artist), Zakkiyyah Najeebah Dumas-O’Neal spoke to me about what it has meant to her as a Black woman artist to be a part of an organization that has such a long- and well-established history of women in leadership roles and those who have found artistic success through the Center. “The space itself was spearheaded by a Black woman, Dr. Margaret T. Burroughs, which I believe instilled quite a legacy for other Black women to follow,” she says. She provides examples such as Elizabeth Catlett, Gwendolyn Brooks, Joyce Owens, Yaoundé Olu and the Black women artist collective “Sapphire and Crystals.” The collective was conceived by artists Marva Pitchford Jolly (who was a supporter and volunteer of the Center) and Felicia Grant Preston, and held their first exhibition at the South Side Community Art Center in 1987. 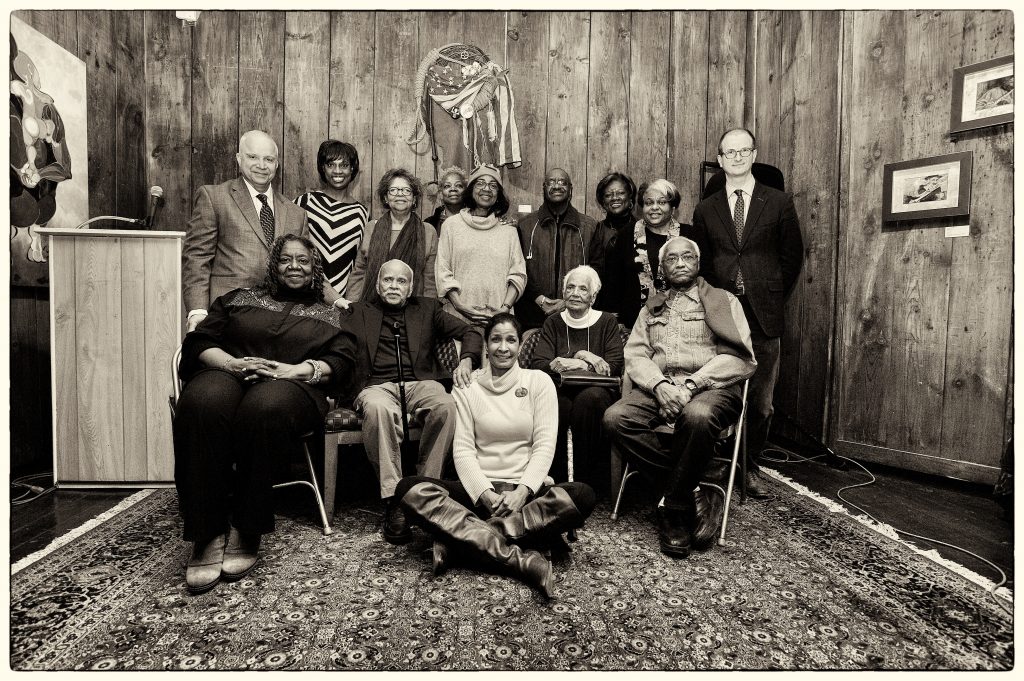 In the tradition of women’s leadership, in December of 2019 the board named Monique Brinkman-Hill as their latest executive director. Brinkman-Hill is a former member of the board and an avid art collector with a strong background in finance and leadership as a former senior vice president and managing director at Northern Trust and president and founder of MBH Coaching and Consulting LLC. This experience will be useful, as the Center was awarded a $2 million grant from the State of Illinois to make renovations that will revitalize the organization and help ensure its continued success in serving the South Side as a community-based arts organization. An executive director with Brinkman-Hill’s level of business knowledge is well positioned to use the gift for long-term strategic success. “A building that houses so much history must be preserved and maintained,” Brinkman-Hill says. This is exemplified by the theme that has been selected for the Center’s post-pandemic year, “Preserving the House that Art Built.” The kickoff is June 17 and the delayed eightieth-anniversary celebrations will culminate with their Annual Art Auction.

The South Side Community Art Center was founded not only to provide exhibition space for artists, but more essentially to provide darkroom and printmaking spaces, classes for community members, and a space for African Americans producing and interested in cultural production on the South Side of Chicago to gather in their own neighborhood. What is created there goes out into the world in new ways, taking the knowledge gained and the traces of those who came before. The Center has faced McCarthyism, economic fluctuations in the neighborhood where it is located, new organizations that offer competing programs for the community’s youth, yet it remains active and supported by the community in which it has thrived for over eighty years.