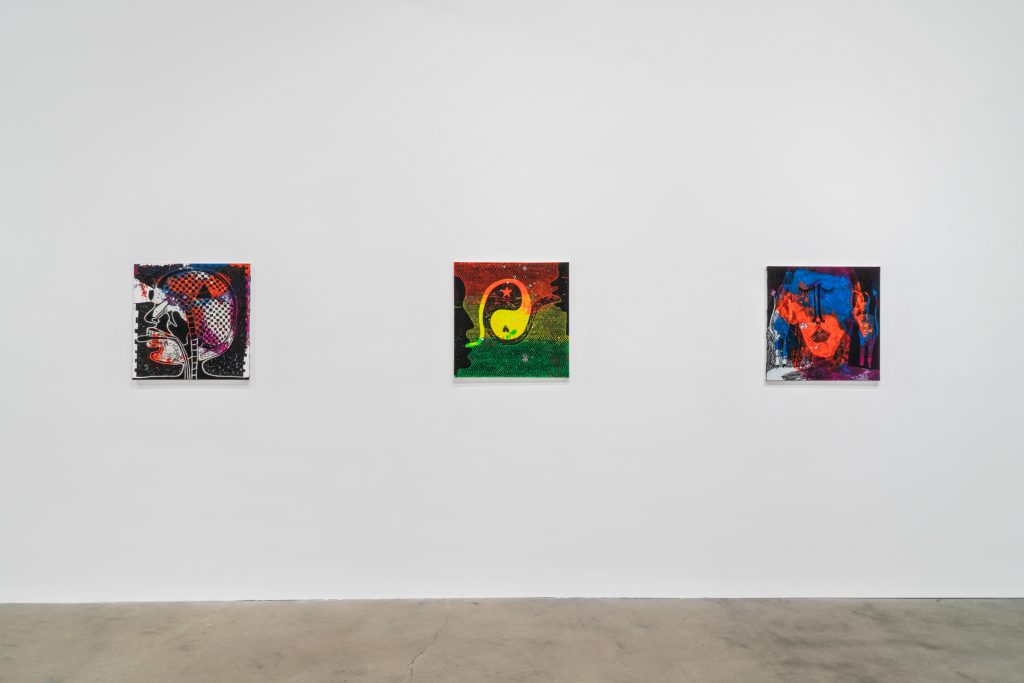 Sharp, poignant and deeply funny, Elizabeth Ferry’s inaugural exhibition at Corbett vs. Dempsey, “Past Times of a Future Stranger,” resonates beyond mere nostalgia for prepubescent idle scribbles. With symbols drawn from youthful sketchbook doodles and techniques borrowed from rainbow scratch-art kits, her latest work interrogates the faculties and functions of the body. What the body can do is rendered both putrid and perverse. Taken on their own, the pictures capture the absurdity of our fleshy shells and internal systems; taken as a whole, the eight paintings probe at the abjectness of labor, its inputs and outputs tangled in an exhausted web of burnout and ennui.

At a primitive level, bodily production encompasses all the fluids and airborne expulsions that come out of us. From saliva to spew to sneezes, Ferry lays these processes bare. One painting, “Puke Party,” depicts what it describes: a bacchanal hoard of canine friends lap up the seemingly endless stream of one dog’s luminescent vomit…the viewer may feel sorry for the lovely, now-stained rug that hosts this sordid get-together; a spritz of Nature’s Miracle may not do the trick this time around. Two other works, “Tongue Yin Yang” and “Human Volcano,” illustrate figures engaged in other irreverent transmissions, mouths agape and legs spread.

Ferry artfully couples these chronicles of the body’s baser functions with scenes of higher faculties such as the senses. A painting titled “Brain Show” crudely exhibits how sight works. White light passes through a cartoonish eye bulb on the cross-section of a figure; the ray refracted through a prism in the brain, the viewer is left to imagine the dispersion of the full color spectrum on the other side. This visage of vision coyly mirrors Ferry’s own artistic process: scratching away a layer of black acrylic paint to reveal a flood of colored wax beneath. 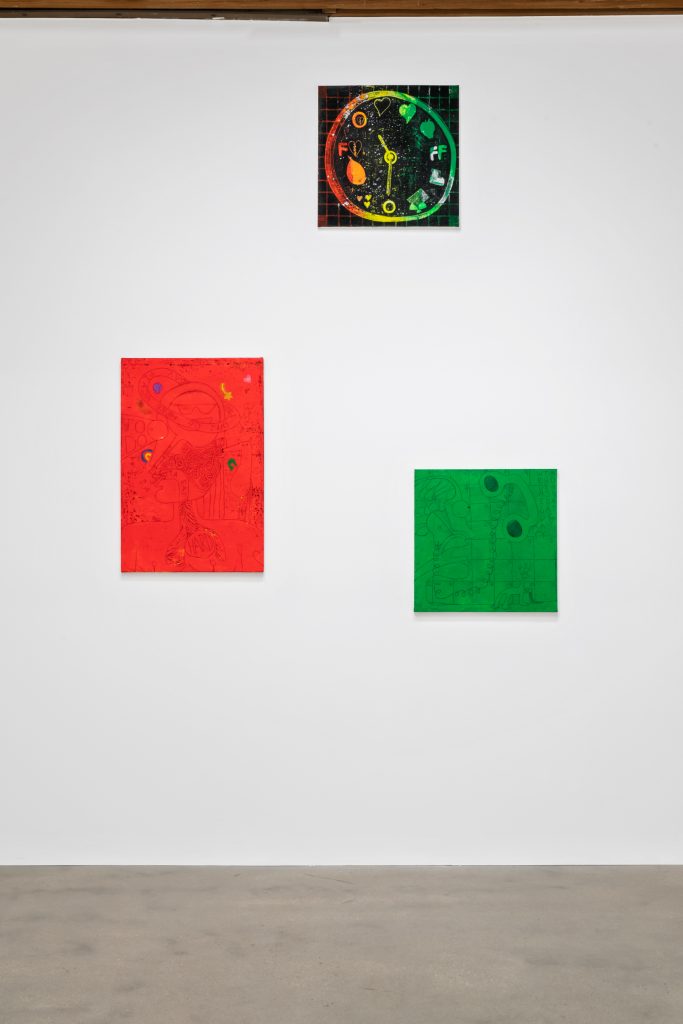 A suite of three paintings on the east wall depict an order higher: thought processes. “Lucky Charms in Orbit” pictures a coral head in profile, paralyzed in thought. Words, not fluids, zip through her organs: “TO DO” beams into her eye; “YA GOTTA EAT” passes through puckered lips; and her emoji-brained skull is crowned with a halo reading “GET OUT OF HERE AGAIN DAY.” Her inane and clumsy cognition on display, this figure articulates the urges that propel our bodies to do things and captures the feeling of being totally worn-out at the end, and even the beginning, of a long workday. Among all the natural and life-affirming processes that the body performs, what is more depraved than the body bound to the so-called grind, exhausted by barely lifting a finger?

Time underpins this series. “Life Clock” hangs high above all works on view, its tattooed face subverting any recognizable system of measurement. Time is the ultimate measure of productivity and yet Ferry toys with our sense of time well-spent. Tossing the calendar aside for a moment, she grants us the simple pleasure to just be. (Alexandra Drexelius)

“Past Times of a Future Strange” is on view through June 12 at Corbett vs. Dempsey, 2156 West Fulton.