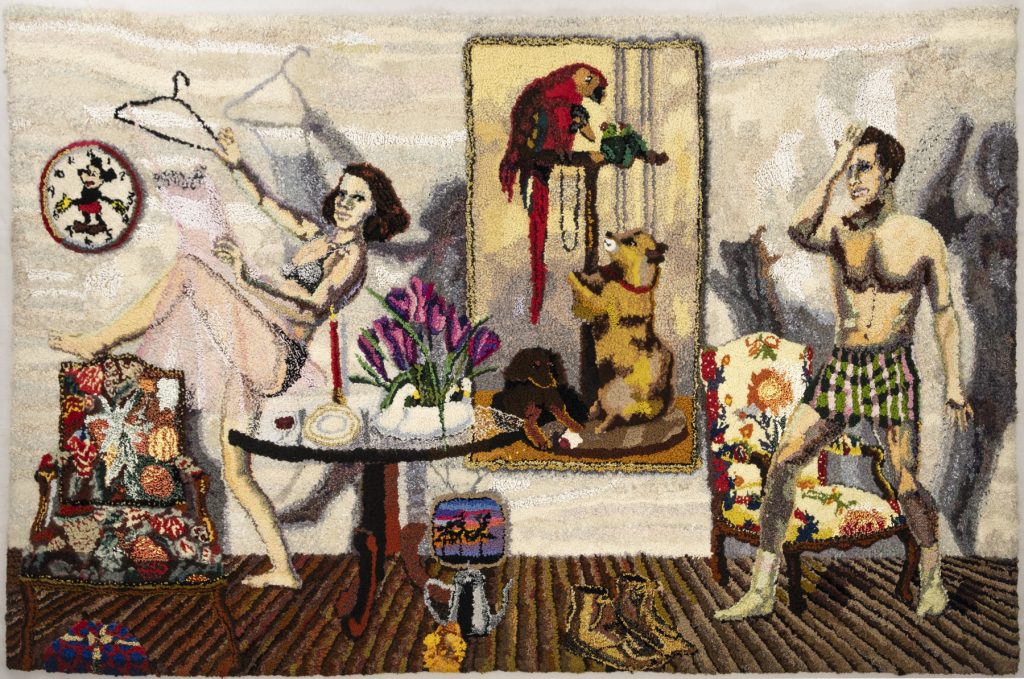 So said a talking parrot to a young girl trying to steal chocolates. This perhaps apocryphal story was told by artist Shari Urquhart, recalling a childhood memory. True or not, the idea of a girl chastised in her quest for the forbidden bears a resemblance to Urquhart’s artistic career. Though not without success, her majestically scaled textile works have remained out of the public eye for many years. Presented concurrently in two Milwaukee venues, Portrait Society Gallery (which also represents my work), and The Warehouse, forty years of textile works from the artist’s estate are shown together for the first time. “Mustn’t Touch” is a much-needed retrospective of this underrepresented artist.

Urquhart’s project began with the most humble of textile forms, rug hooking. From it, she experimented expansively to include hand-dyed fabric, found materials, texture and color, layered and compounded into painterly vignettes of figures, animals and wacky symbolic juxtapositions.

Urquhart was raised in Wisconsin and studied there, but found her way to New York. The art world of the 1970s was heavily biased against women. Although exhibitions such as “Wall Hangings” at the Museum of Modern Art in 1969 seemed to bring textile art into the contemporary conversation, artists like Lenore Tawney, Sheila Hicks and Urquhart had hurdles to overcome. Urquhart’s work was championed by Marsha Tucker, who founded the New Museum in 1977, but exhibitions and sales remained elusive.

Urquhart responded by doubling down on the scale and scope of her work. Her massive arrangements often took a year to build. Some measure over twelve feet in length. Within them, Urquhart populates shallow prosceniums with symbolic narratives. Her compositions, though often whimsical, belie autobiographical struggles in relationships, anxiety and depression.

The compositions are stunning and psychologically complex. In “The Renunciation,” we see a female figure dressed in a tutu idly reclining, her slippers dangling from one hand, a hobbyhorse held loosely in the other. On the floor are symbols of the childhood imagination, a galleon ship, a fairytale castle. Behind the reclining figure hangs a copy of Arnold Böcklin’s “Calm Sea,” which depicts a mermaid echoing the dancer’s pose, lounging on a rock, one of her human victims floating just below the surface of the water. The tapestry encompasses innocence, sexuality and ambiguous spaces between all at once. A lit candle burns with longing, solitude, transience. 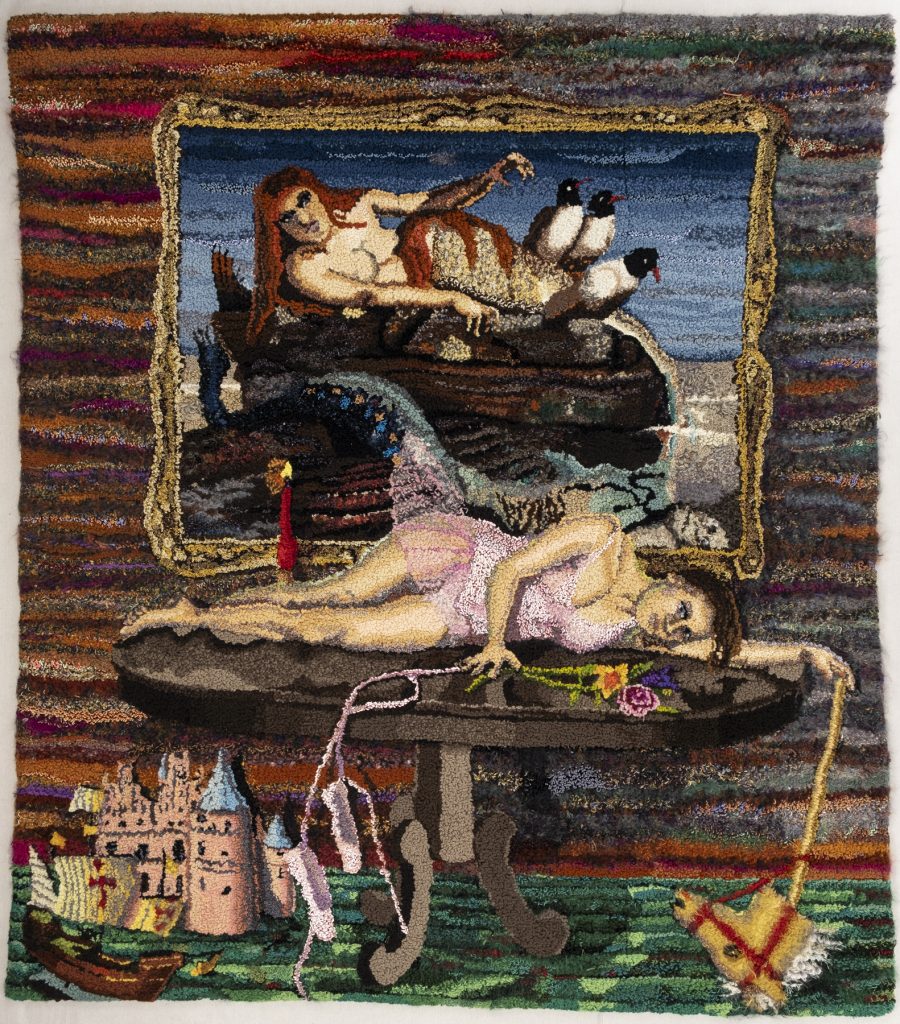 Other works use similar imagery, but include the addition of a male figure. Couples cavort in their underwear, dancing around each other, posturing, playing, surrounded with furniture, carrots, a fishing pole, a snake.

Urquhart’s use of color and light are virtuosic. Leaning in, the viewer sees a rich palette in lighted areas, but purples, greens and blues equally flesh out shadows. Even reflected light is rendered carefully, in reds, oranges or a pale teal. The artist also improbably portrays translucent fabric and glass in yarn, with tour-de-force treatment.

Tucker reflected on the painter Balthus as an inspiration to Urquhart. I find this connection fascinating. They share a similar use of space, as well as mysteriously symbolic objects and animals, especially cats. Balthus’ figures, however, carry an architectural authority that Urquhart’s lack. Her figures hew more closely to her photographic sources, some of which are included in the show. Whereas Balthus bends and abstracts his figures to complement his compositions, a lesson derived from Piero della Francesca, Urquhart’s figures are more animated and lively.

Shari Urquhart passed away in 2020 at the age of eighty, before she was able to view this exhibition, adding poignancy to this project. Her mysterious imagery betrays the biases and conflicts which pervaded her life and her art. (Rafael Francisco Salas)