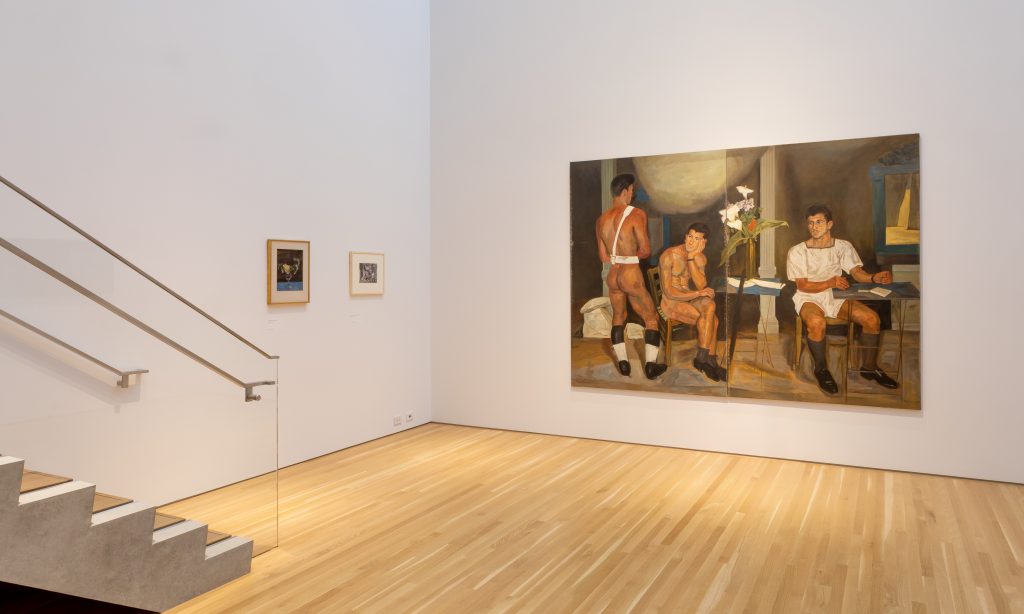 Yannis Tsarouchis painted gay life in mid-twentieth century Athens as based on his experience. He was a bourgeois, well-educated man with a taste for sturdy younger men from the working classes. Presenting life in a sexually repressive society, his paintings emanate anxiety as well as desire—making them far different from most erotic fantasies that have targeted the male gaze ever since the Renaissance. His handsome young dudes hardly ever remove their tighty-whities and their interactions feel more furtive than lustful or liberating. Their bodies are not presented sensually, nor are they accompanied by luxuriant fabrics or furnishings. Their gazes are more vacant than flirtatious. They have no discernible character, personality or intelligence. Their matter-of-fact attitude is closer to the sex workers represented by Manet than the nymphs painted by Boucher. Each seems to be saying: “Here is my body, I expect nothing.” They are appropriate muses for an artist whose self-importance is evident, as he turns his back on both the viewer and a lithe young model while “Copying Titian” in the painting of that title. Photographs of models and examples of preparatory studies demonstrate a creative mind at work. Examples are also shown from his parallel career as a set and costume designer for the stage. 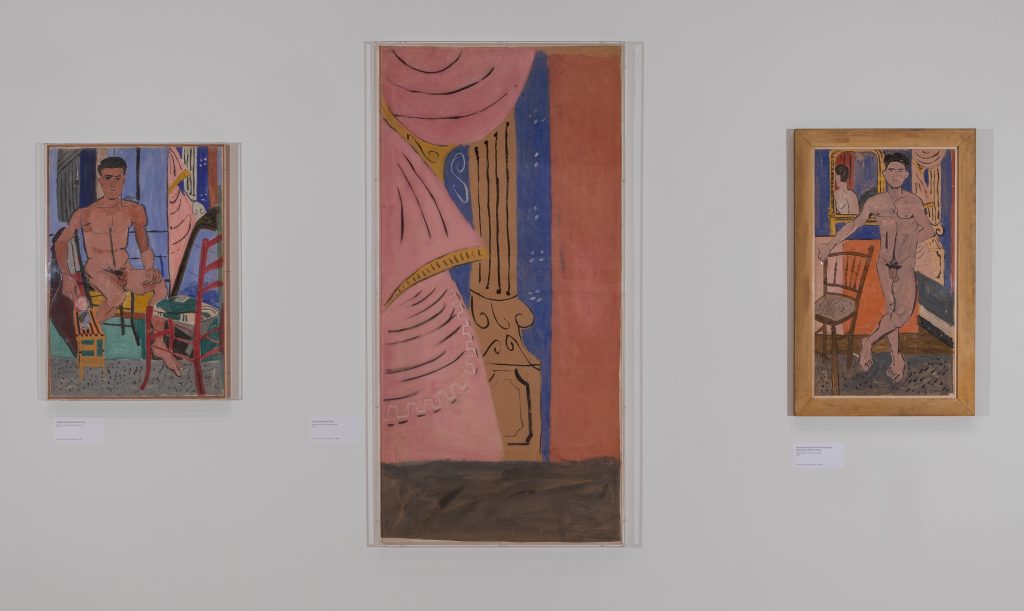 The artist studied traditions of European art: ancient, academic and modernist, as well as Greek sacred and vernacular arts and crafts. When compared with the best examples of them, however, the work on display is disappointing. His attempt at a Fayum portrait is too awkward to be riveting. His academic figure drawing lacks a strong sense of volume in space. His modernist figure painting falls short of graphic power. All of his work, even the floral watercolor, is minimally sensitive to tone and color. Nothing is visually delicious. What you feel is effort, sincerity and yearning. What you miss is joy, timelessness and virtuosity, except, perhaps, in “Schizophrenic” (1968), a sensitive portrait with a very strong presence.

Like his American contemporary, Paul Cadmus (1904-1999), Tsarouchis (1910-1989) presented a corner of modern life that badly needed to come out of the shadows. Both became controversial for associating sexual desire with men in military uniform. But where Cadmus searched for grotesque humor, Tsarouchis was looking for existential profundity. Cadmus was talented as a cartoonist, Tsarouchis was no more than mediocre as a post-Impressionist painter. But it appears that he gave each painting everything he had. He aimed for truth, not just something pleasant, acceptable or entertaining. That suffices to give his work a compelling edge—though most of the pieces in this exhibit did not need to travel to Chicago. He was a founding member of the Arbos Group, which was dedicated to building a Greek tradition of Modern painting. Several were very good painters. It would have been more interesting to see Tsarouchis in the context of his peers rather than all by himself. (Chris Miller)