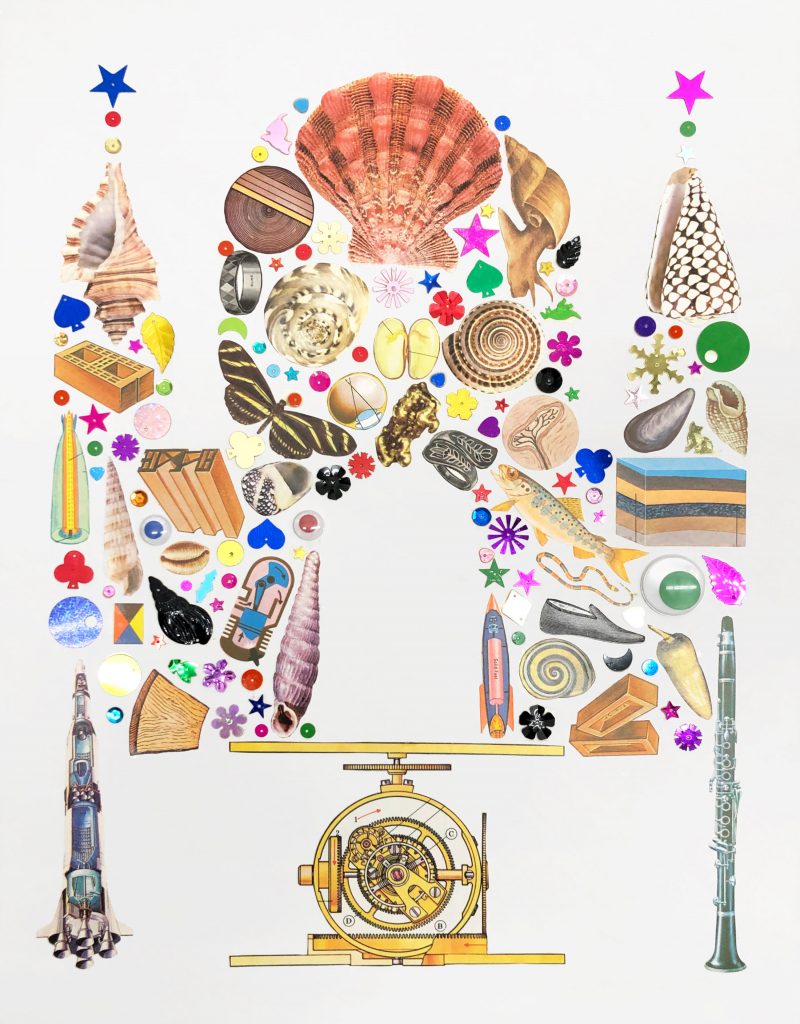 It’s been seven years since the artist Edie Fake last lived in Chicago, having decamped first for Los Angeles and then a desert area outside that city in 2014. But with their new solo show at Western Exhibitions, “The Pieces,” as well as their appearance in “Chicago Comics: 1960s to Now” at the Museum of Contemporary Art, the city continues to play a key sustaining role in their work. Fake describes feeling “tethered to [Chicago] in almost a magical way,” the city where they worked at Quimby’s Bookstore and first found the themes that have guided their work ever since.

With “The Pieces,” Fake drew inspiration from their sandy surroundings while continuing to explore themes of queer community that have been at the core of their work for years. In paintings reminiscent of earlier works like the “Memory Palaces” series, as well as a series of collages which play with sandcastle-like structures built with disparate objects like seashells, googly eyes and butterflies, things shape themselves together as much as they’re held apart, gaps which bring to mind the ever-present six-foot gaps separating us over the last year. As with all of Fake’s work, abstract representations of community form and collapse, cohere and dissipate, reflective of the real experience within queer lives and their ever-shifting constellations.

Newcity spoke with Fake about their new Chicago exhibitions, their ongoing focus on transitory communal spaces and why it’s important to tend to queer histories. 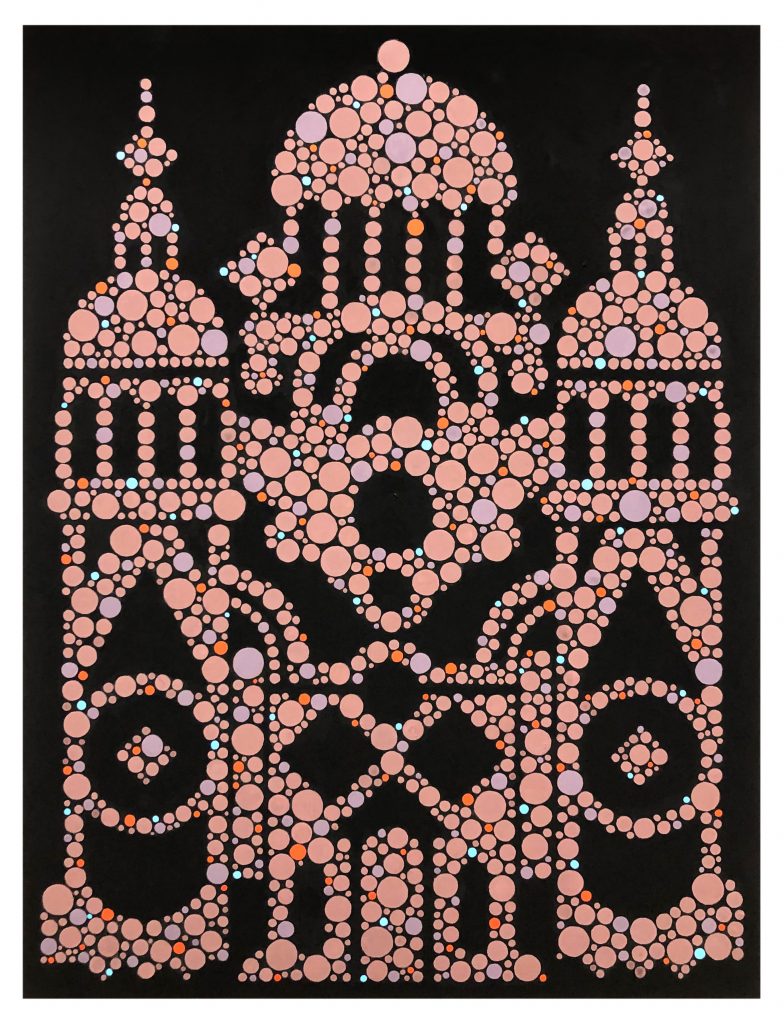 Sand is a defining element in your show at Western Exhibitions. When did that focus come into your work, and how does it operate in these new pieces?

There are these little sand particles that have been showing up in work I’ve been doing without kind of much of the focus. Then, throughout the pandemic, I’ve been thinking about the question: What is a queer architecture for the Anthropocene? It’s something that seems like it can be so easily swept away, and yet, it’s something that gets rebuilt constantly or reformed with pleasure, and vision and joy. Thinking about how fragile structures have seemed, especially in the past year, and how that can be reimagined.

Trying to think of a title around sandcastles, everything with them is so corny, but it really is this concept for the work: it’s something that gets built with the knowledge that imminent destruction could be very close at hand, and yet it’s built with joy, and for pleasure, even with that kind of temporary-ness of it at the forefront. Also, living out in the desert, constantly looking at sand and having a real appreciation of all these different elements that go into it, and the magic of it holding together and falling apart too. 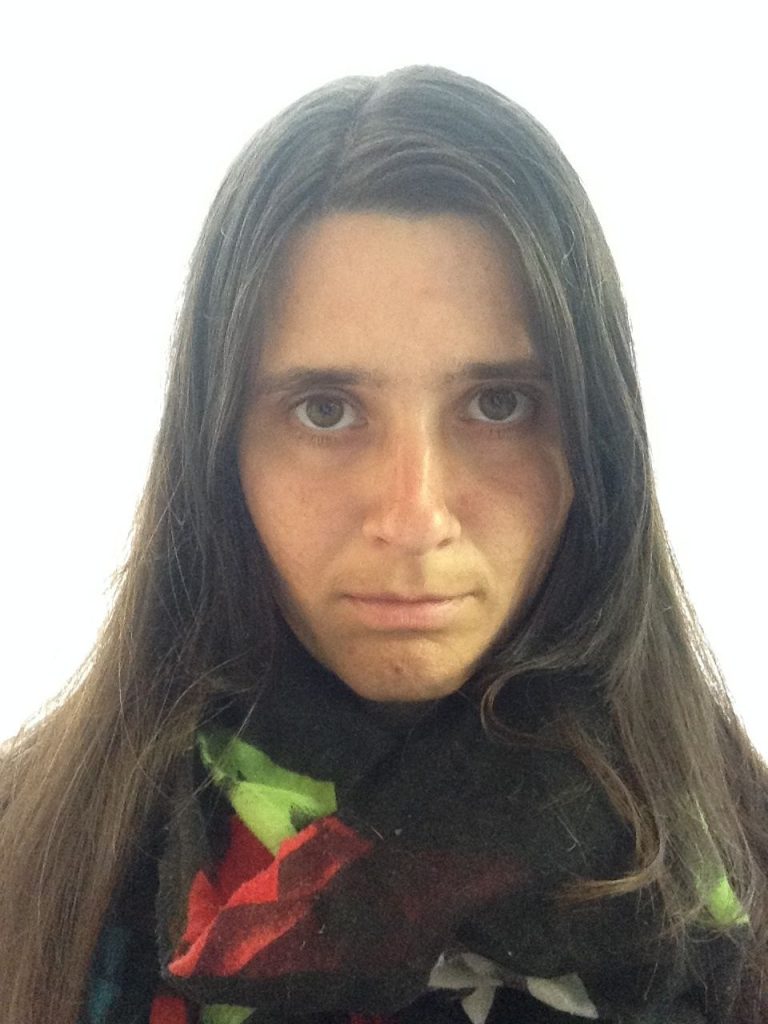 That sense of transitory communal space has been there in other pieces of yours, most notably the “Memory Palaces” series, where futuristic queer facades seem like they might exist in one moment and be gone in the next. Is there a through line in those themes between these works?

This year has been such a revelation about the value of physical space. As someone who thinks about it all the time and really values physical space, this has been a real exercise in seeing how important it is to be able to share physical space with others. Thinking about the separateness between all the little particle elements in these paintings and collages, and in the way that actual sandcastles work, there’s this thing called liquid bridges, where a little bit of water holds together these separate elements, and how they erode when they dry up.

There’s some lovely wording at the Palm Springs City Hall, which says “the people are the city.” I think about that with these sand structures coming together: there’s this community that’s abstract and fragile and constantly reforming itself or having different boundaries. Sand also has a lot colliding with it. Where I’m living, I see climate change making the environment much hotter and much drier very quickly, and at the same time having sea levels rise, which is a huge threat to something like a sandcastle. Sand as a construction material is also becoming more and more scarce as development with concrete accelerates. 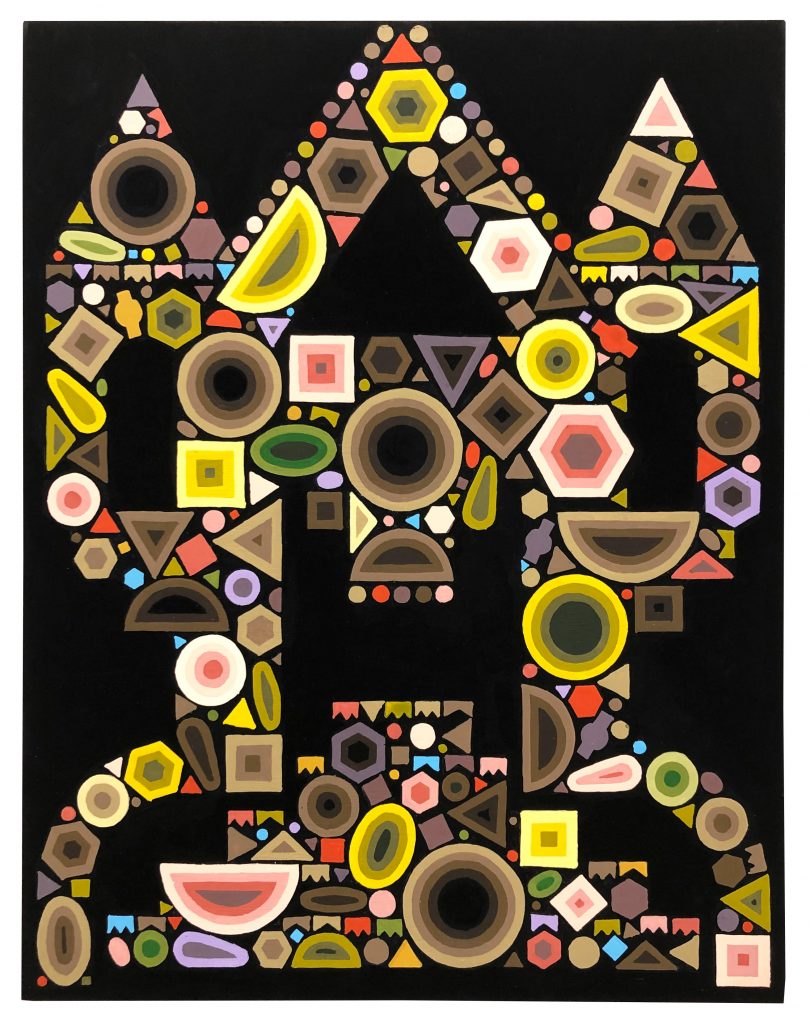 Though you haven’t lived in Chicago for a few years, the city has obviously remained important to your work, especially with your ongoing connection to Western Exhibitions. What does it mean to come back to Chicago for this solo show and your MCA appearance?

I feel like I spent a lot of years as a nomad, but I feel like I have an umbilical cord relationship to Chicago. At the same time, I know that my idea of what the city is isn’t set in stone, and that every time I come back to it, it’s a changed place. It’s the first place where I started having art shows and I feel close to the integrity and the resourcefulness of the art scene in Chicago. I also don’t know what to expect, because every time I return to it as a place it’s different. Still, I do feel tethered to it in almost a magical way. It’s a formative place for me, and a place where I solidified something that my work continues to grow out of, looking at queer history and queer space, why I do that, and different methods for doing that. 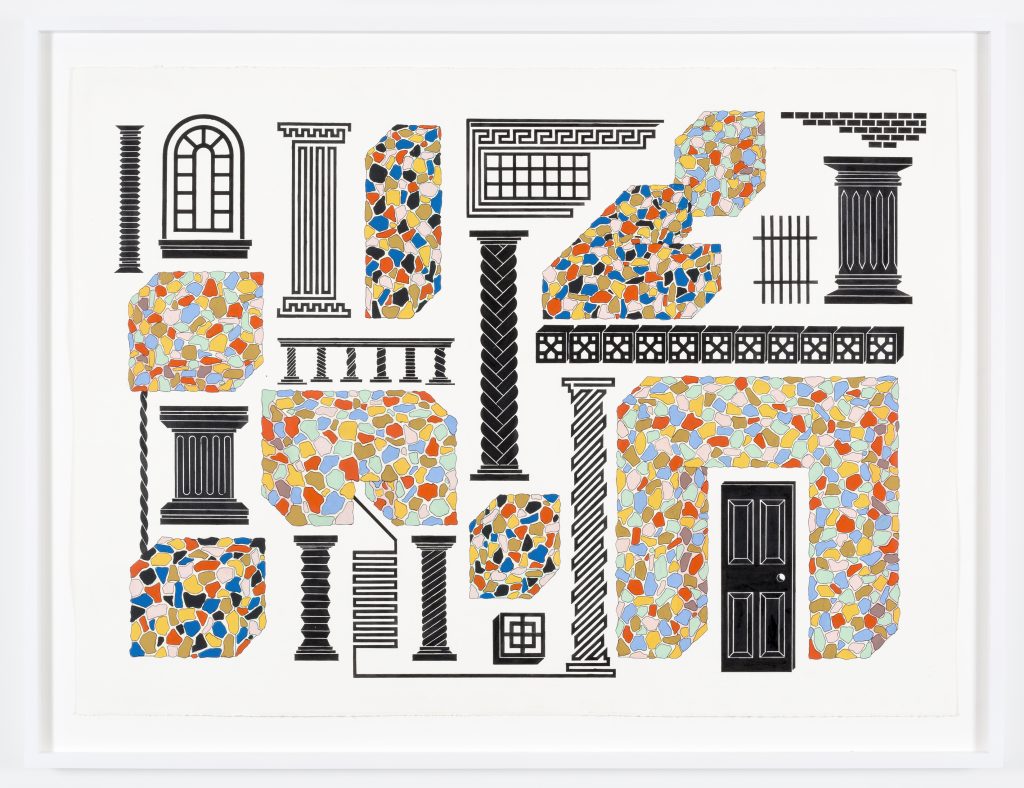 Edie Fake, “Before Stonewall,” 2015/Courtesy of the artist and Western Exhibitions, Chicago

Your work sits against a backdrop of significant growth in the trans community, and a frightening spate of new anti-trans legislation in most states in the United States. How do you sit with those conflicting forces hovering over trans life today?

“It was the best of times, it was the worst of times.” Not only that, but the present is not enough. The world is becoming much more specifically restrictive for trans people, and then at the same time there’s simultaneously a lot of things that are better, like accessing trans affirmative medical care has become much easier for me over the past decade. Having complex identities, and language around trans identities has become much more widely accepted in the past few years, and open to nuance in a way that it hasn’t been a wide way before, which I think is very exciting. But this legislative targeting is really ferocious and terrifying and part of these larger patterns of oppression. 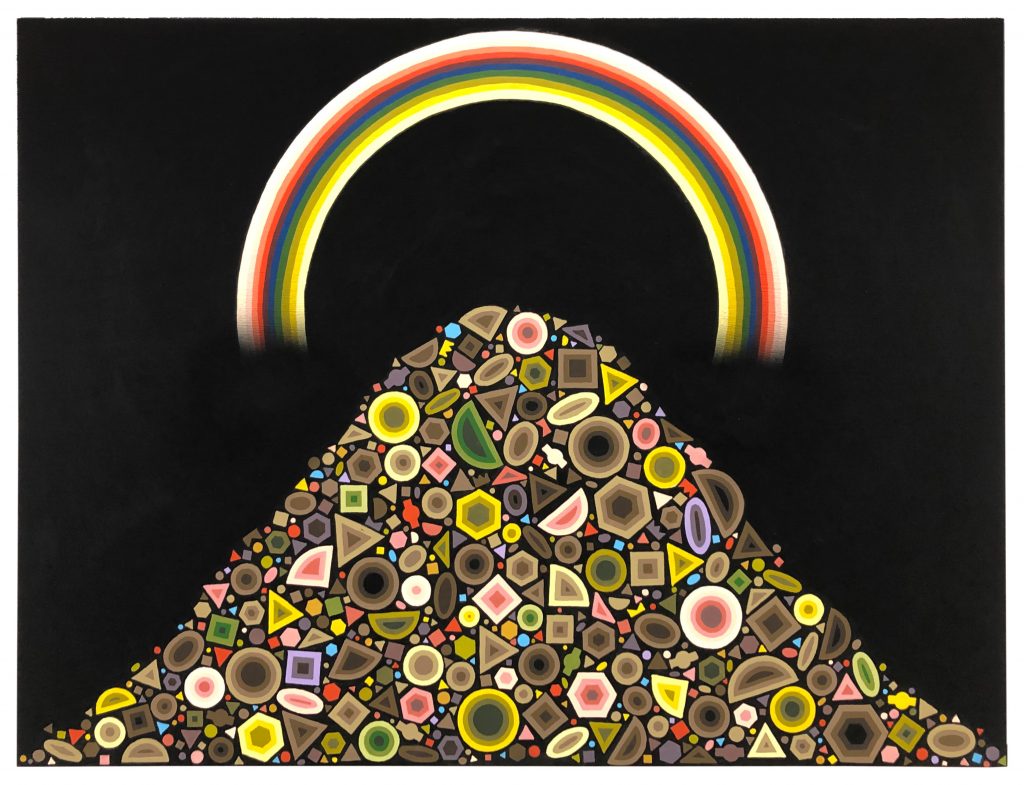 So much of your work is about tending to what we’ve inherited as queer people. Why is that kind of attentive approach to history so essential in your work?

Tending is such a powerful word, because I think that’s exactly how we see the potential of what’s happened and make connections to history that’s still living. We can also tend to histories that have passed where the people and places aren’t accessible anymore, but you can still say, “This demonstrates this mode of life.” It’s complicated, and it’s not something that could ever be duplicated, but it is something that it brings roots into what happens next.

There’s also the act of touching the past or hanging on to a vision of it that can touch the future. I feel like I’m not interested in like a first-ness. I’m interested in legacies of things, and specifically a legacy of queer and trans lives in space, place, city and world.