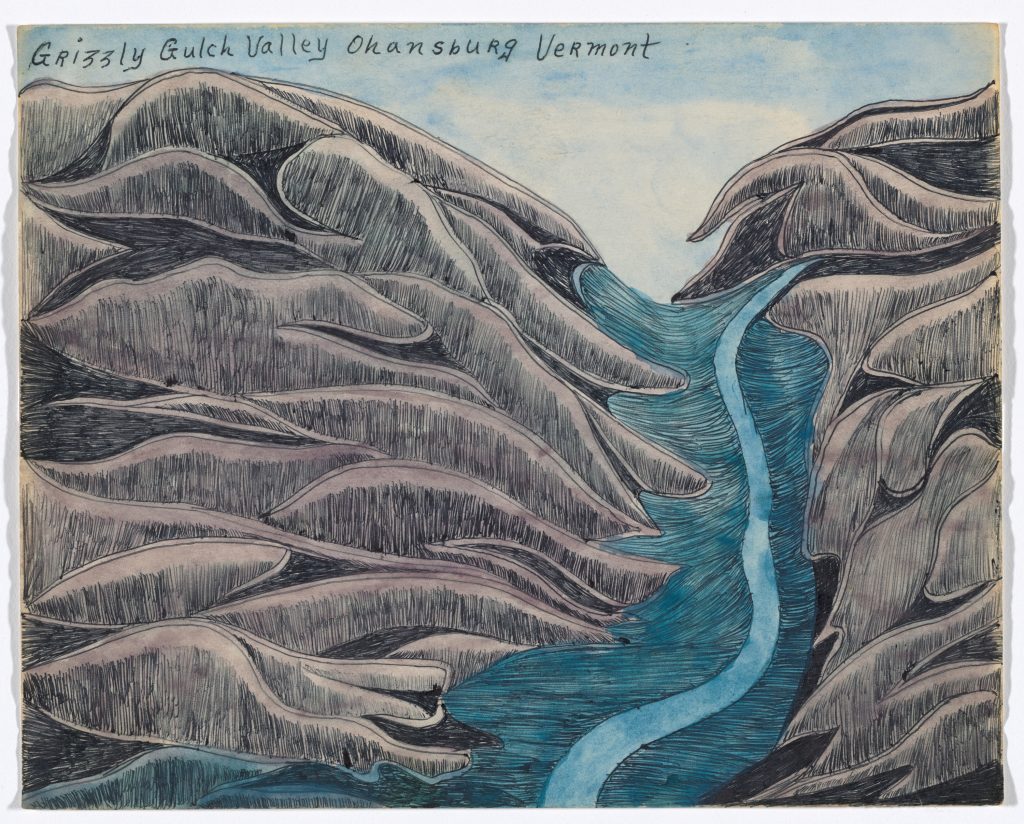 Joseph E. Yoakum’s drawings begin with lines on a sheet of paper. Sprouting from the tips of graphite pencils, ballpoint pens and felt-tip markers, his lines unfurl across the page like willowy tendrils. Dissecting, encircling and incising, the lines create impressions to be traced and cavities to be filled. The lines mark a beginning. Mirroring the artist’s process, “Joseph E. Yoakum: What I Saw,” begins with a line: a timeline of Yoakum’s life. Composed of a jagged outlined sinew form—one of Yoakum’s seven formal devices identified by Chicago artist Philip Hanson—the timeline extends from Yoakum’s birth in 1891 to his death in 1972. This linear chronology provides a succinct history of Yoakum’s travels and relationships and details his brief but prolific career as an artist in his last decade of life.

An artist’s biography risks overshadowing an artist’s practice, but the curators take great care to let Yoakum’s work stand its ground. Issues such as Yoakum’s unreliable narration, spirituality and racial identity are presented in minimal wall text and introduced through works on view. A tracing of a white model in a hair product advertisement for a portrait of Ella Fitzgerald imparts a complicated relationship to blackness—a term used in lowercase throughout the exhibition to acknowledge Yoakum’s complex self-identification. A drawing of his birthplace states an inaccurate date of birth and depicts a house inconsistent with the styles of the time.

Biographical matters are covered in greater detail in the catalogue, but the exhibition foregrounds technique and form. Loosely organized by broad thematic categories—landscape, portraits, memory and technique—the work is further sorted by pictorial content: topographies ruptured by roads and railways; environments marked by boats and bodies of water; natural scenes cut through by man-made structures and unwieldy cyclones.

The curators reveal the mechanics behind Yoakum’s work through juxtapositions of his original monochrome line drawings and his copies made using carbon paper, each subsequently filled in with rich washes of watercolor and pastel. His copying system—a cost-effective invention before the popularization of the Xerox machine—was a way to protect against unauthorized reproductions and plagiarism of his work. Yoakum’s handmade copyright and refusal to sell his original drawings underscores the importance of ownership and circulation in his practice; both of these issues come across most clearly when looking at his detailed inscription system. 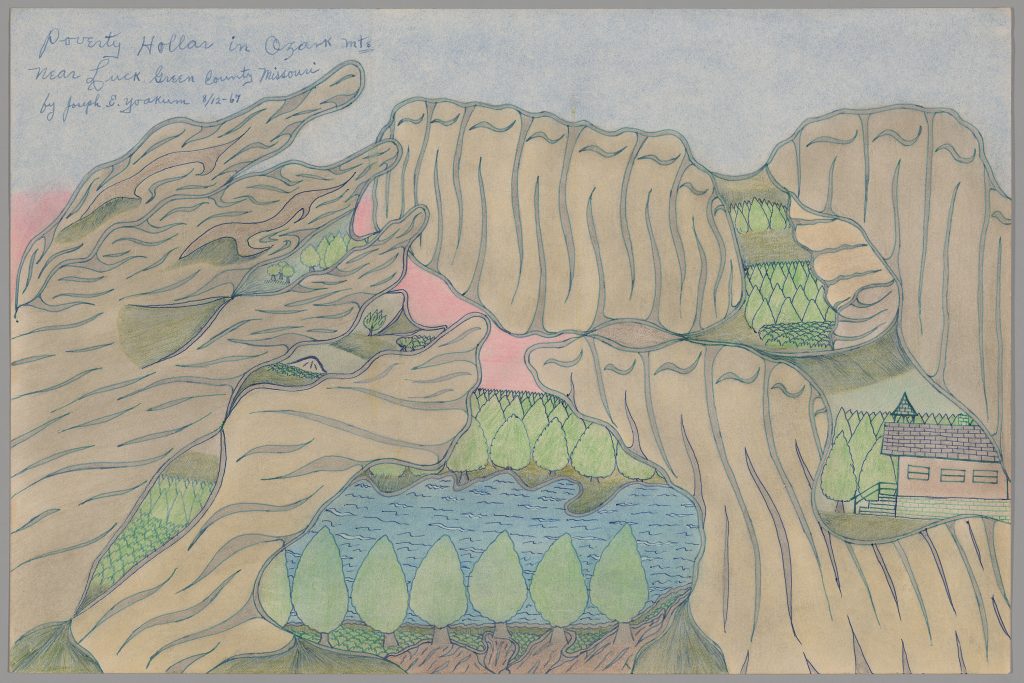 The act of inscription is central to Yoakum’s process. At an elementary level, drawing itself is a form of writing—its visual script manifested in the act of translating the observed or remembered into the imagined. Yoakum’s myriad mark-making, comprising dashes, hatches and repetitive lines, exude a signature style. His works require no formal signature; his inventive draughtsmanship and copying methods sign themselves. And yet, his compositions carry titles and additional inscriptions of authority such as dates, signatures and other markers to distinguish between originals and copies. His landscapes and portraits enact an authority in being named, dated and signed. No matter how fantastical or fallacious his renderings appear, the annotations perform and bear witness to an original act of seeing. When we look at Yoakum’s drawings, we see what he saw.

“Joseph E. Yoakum: What I Saw” presents a matter-of-fact account of Yoakum’s creative output. To understand Yoakum’s life and his work we need only look at the lines he laid down.

“Joseph E. Yoakum: What I Saw,” at the Art Institute of Chicago, 111 South Michigan through October 18.