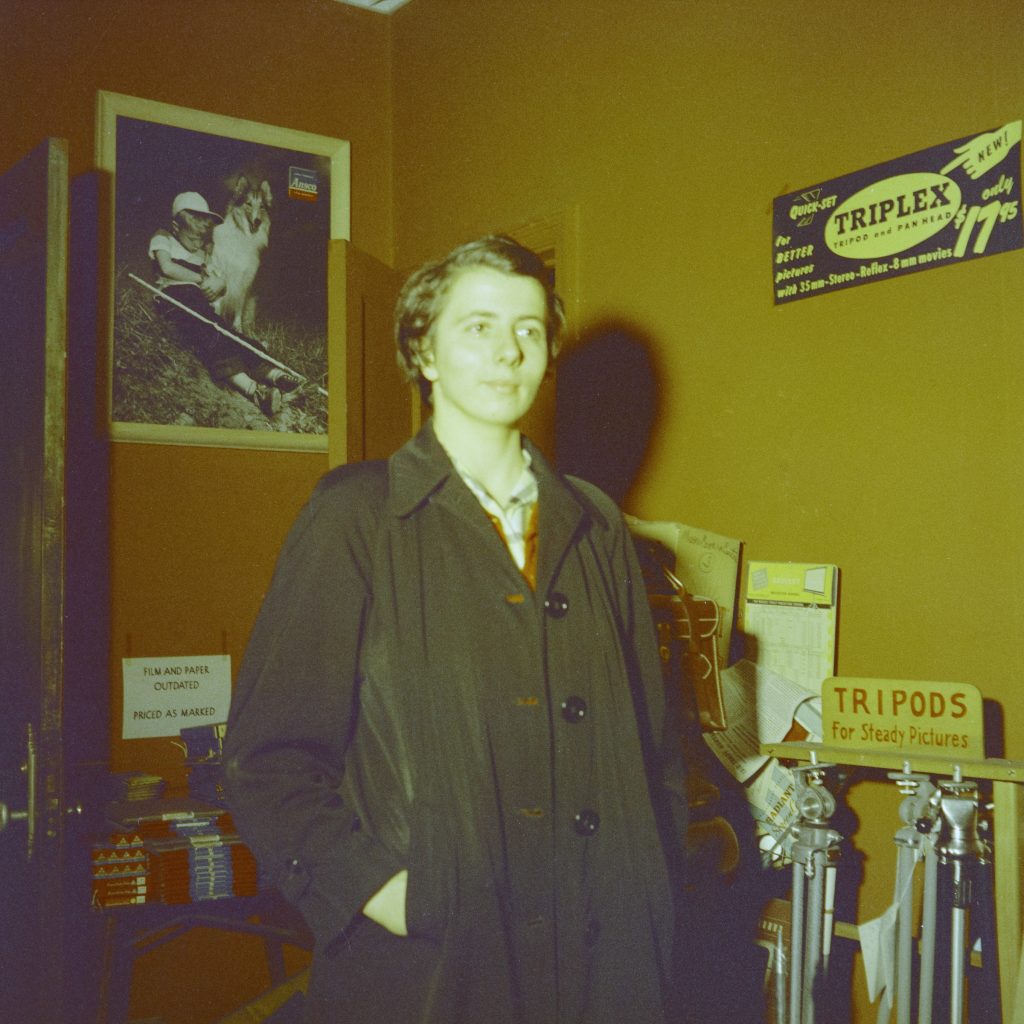 Vivian Maier photographed next to a tripod display in a camera store wearing a red sweater under a loose black coat New York, New York, circa 1955. Inkjet print, 2021, Gift of Jeffrey Goldstein, © The Estate of Vivian Maier CHM, ICHi-180175

Two socks are hanging from a thread: a black sock on the left, and a white sock on the right. They are at a noticeable distance from each other, each sock touching the edge of the frame, and drying in the sun after, I assume, spinning in the laundry. The black sock’s pair makes a small appearance at the bottom of the left frame, but the two different-colored socks are mostly noticed as separate lonely objects, pinned to a line with pink clothespins. This is one of the many photographs that moved me in “Vivian Maier: In Color,” at the Chicago History Museum. Next to this photograph of the black and white socks is a striking image taken at a Chicago train stop in 1977. Two women sitting on the same bench, with their backs to each other. A white woman on the right is illuminated by the sunlight. To the left of her, a Black woman has her head down, and is sitting on the edge of the bench. In the other rooms, patterns like this appeared in pairs. A photograph of white children playing in a sprinkler is placed next to a photograph of Black children looking solemn behind a glass window. Two Black women looking back at the camera, about to cross a street, where white men in suits stand on the other side. The odyssey of a segregated city, quietly placed in square frames, converse with each other decades later.

Vivian Maier did not necessarily take these photographs with the intention of placing them together, but curator Frances Dorenbaum noticed the striking juxtaposition when she placed them side-by-side. We speak over Zoom about the exhibition and when I mention this to her, she tells me, “When you start paying attention to certain patterns, you might see them appear in surprising places. I appreciate how close Maier was paying attention to her surroundings. She appears to be mindful of certain tensions between certain groups of people, as well as similarities.” 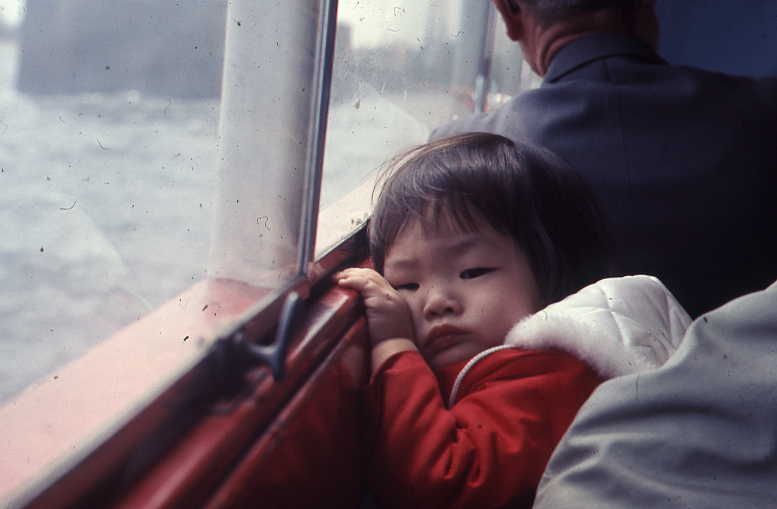 When Dorenbaum began to curate this exhibition, she was aware of the weight of her task. She sifted through hundreds of color negatives, most of them donated by Jeffrey Goldstein and unseen to the general public until now. She had to select a small number to showcase from this large selection of negatives, and some were damaged, as they had faded over time. Additionally, she was doing all of this from her hometown of Toronto. Because of the pandemic, she couldn’t travel to see the negatives in person, and going through the collection of Maier’s color photographs was a collaborative effort with other museum staff who enjoyed recognizing the locations photographed. The exhibition includes sixty-five prints dating from 1956, the year that Maier moved to Chicago, until the late 1970s. These photographs are categorized by Dorenbaum into the ways that Maier was “looking.” There are seven sections: looking up, down, from behind, straight on, through, afar, and up close.

“I hoped that the variety of images would draw people in enough to think a little more about the photographs themselves, and maybe what those reveal about subjects in them, rather than leaning too heavily on them revealing about her biography,” Dorenbaum says. She explains that she wanted to highlight the “gentler” side of Maier’s work, since she is mostly known for her evocative street portraits. The selected photographs vary in their composition, but they highlight Maier’s constant gaze on the world, her fastidious way of looking and her intricate way of documenting her surroundings. 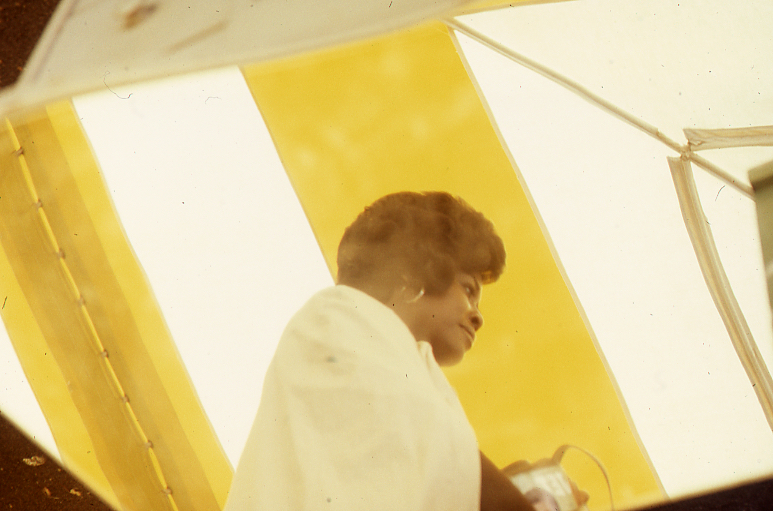 For a photographer like Vivian Maier, there is still so much that is unknown, and so much that goes into printing, framing and curating her photographs that is based on assumptions and instincts for curators such as Dorenbaum. There are also several assumptions that I realized I was subconsciously using to define Maier’s work. As we spoke, I recognized a trope that gets immediately placed upon Maier because of the way in which her photographs posthumously rose into fame. Pamela Bannos, author of “Vivian Maier: A Photographer’s Life and Afterlife” noted in her introduction that “our current lack of understanding of this woman and her passion for photography stems from oversimplifications of her emergence and packaged versions of the story.” Many Chicagoans know the story of the thousands of negatives bought at an auction by John Maloof, Jeffrey Goldstein and others in 2007, who then elevated her into fame. The 2013 documentary “Finding Vivian Maier” describes this discovery in more detail, but there was “no definite statement that she wished for this,” Dorenbaum reminds me. “Maier is not here to speak about her work or her life,” she says, adding that Maier left minor instructions on her negatives in terms of how to print them, but not much else that could help the curating process.

It is difficult to say how much the biography of a photographer matters, since it depends on the nature of their work. Maier photographed the children that she was nannying, but is it just because she is a woman that she got categorized as a “nanny photographer” when her photos were first discovered? Famous male street photographers such as Joel Meyerowitz, William Eggleston and Garry Winogrand  were not subject to being defined by their day jobs. But as a photographer who also happened to be a nanny, Maier’s perspective is a unique one, and she might have benefited from taking the train to her various jobs with her camera in hand. The majority of what we do know about her life is narrated through her photographs. Since, unlike a writer or keeper of a diary, she did not document her personal thoughts, what is noticeable through her documentation of people is that she was charismatic. She spoke with people and asked permission to take their photos, which can be seen in how often there are smiles and eyes that are looking directly into the lens, creating a sense of comfort and consent in her portrait photographs. She often includes herself in the photographs, too, via her reflection, to participate in this act, documenting her own existence. 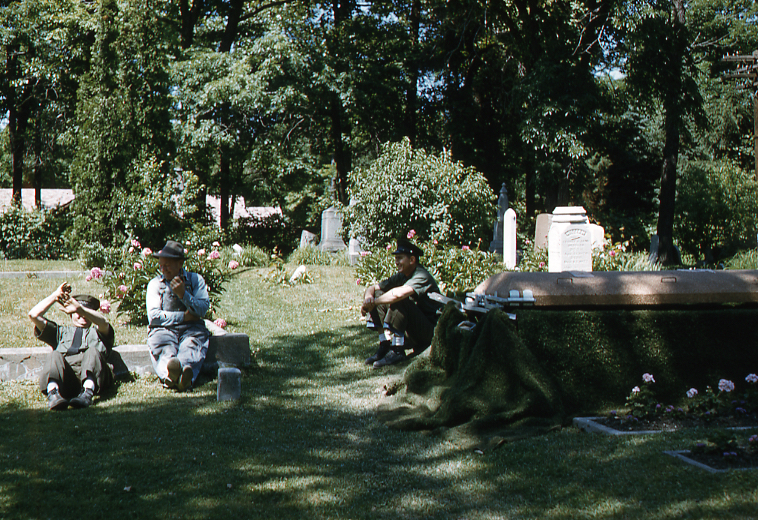 Three workmen resting beside a casket in a cemetery, location unknown, circa 1958. Chicago History Museum, ICHi-180443/© The Estate of Vivian Maier

Maier was an artist constantly experimenting with technology. Her color photographs are proof of her curiosity and constant experimentation. She did not stick to one medium, to one camera or to one type of film. She is most known for her Rolleiflex camera, which can be seen in her self-portraits taken in mirrors, but Dorenbaum tells me that she often carried two or more cameras around her neck to switch between color and black-and-white film, as well as other types of formats. The exhibition at the museum includes audio recordings she made, as well as 8mm films. When I ask Dorenbaum why she included the audio fragments, she says, “I tried to show her humor, her curiosity, her bold opinions, forging her feminist path. She was always trying to learn, constantly trying to understand the technology to maximize it.” She adds, “I really value how photographs tell stories.” The sound recordings are exhibited as QR codes on the walls. When I listened to several, I heard her attempts at learning about herself, the world, all while using new technology. Maier speaks into her recording device with intention: “Now, I want to also make a little experiment. I think I better stick to the volume of seven and tone of four or five.” This layer of depth and dimension alongside the color photographs are additional details that compose the ever-expanding portrait of Maier as an artist.

She had an artistic eye for composition and colors, but Maier also had journalistic instincts, wanting to know and understand what was happening around her and documenting historical moments. In her 8mm films, she zooms in and observes, especially during the demolition of the Chicago Stock Exchange, which appear both as film and still photographs. The fragments of the Stock Exchange felt scattered like the debris from the demolition, in the exhibition space. I found perspectives of them in each “looking” section. Maier also often photographed newspapers, fairs, the Republic National Convention and police officers. There is a photograph of an American flag glowing in the sun, twisting in the wind, seen from above. Paired with this photo is a Chicago Tribune newspaper with the headline “Nixon in shock; call his condition ‘critical.’” There are also many photographs of strangers’ hands, and what the hands are holding: a lunchbox, a briefcase, two hands holding each other. I am reminded of Roland Barthes’ observation in “Camera Lucida,” “What the Photograph reproduces to infinity has occurred only once: the Photograph mechanically repeats what could never be repeated existentially.” Maier photographed to document, to capture the fleeting moments that were about to disappear. She captured her own history as well, documenting her shadow and reflection, but without knowing that her photographs would be printed, framed and exhibited. 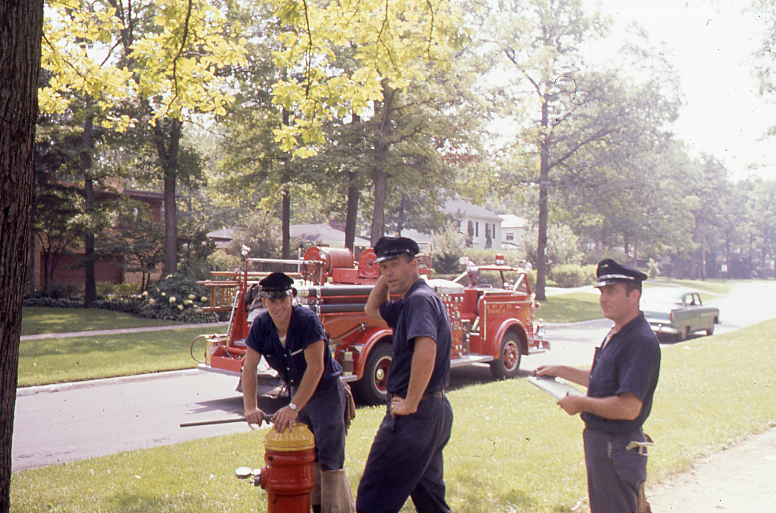 Though there is a lot we don’t know about Maier, we know that she has created within herself an important photojournalist of a past Chicago. I went twice to the exhibition, to take notes and look at the photographs, and both times I overheard conversations between people and the memories that the photographs brought out of them. I listened attentively, as if there were clues in the images. There were two women who remembered going to the Chicago Theater, taken by their mothers once a year to go see a movie. They narrated these stories to themselves as they looked at Maier’s photo of downtown Chicago. I also overheard someone astonished and perplexed by how she took her self-portrait in the mirror. I wanted to explain to him that it was partly a reflection of the window to the street, with a mirror inside the store, that created the illusion of three Maiers. Instead, I let him remain amazed by the magic that she was able to capture in the mundane. I invite you to appreciate the small details as well, and to see Maier as an ambitious, curious and prolific photographer, not simply a nanny with a camera hobby. What is left when we can just appreciate photographs for their aesthetic beauty, for their way of capturing the fleeting moments before they are gone? 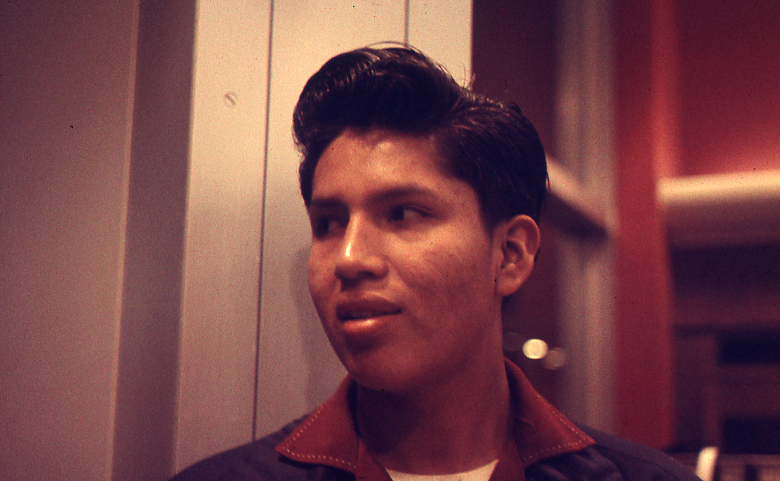 In the last room of the exhibition, there is audio of Maier speaking into a recorder. “Well, I suppose nothing is meant to last forever. You have to make room for other people. It’s a wheel. You get on, you have to go to the end, and then someone else has the same opportunity to go to the end and so on, and somebody else takes their place. There’s nothing new under the sun.” If you get the chance to be alone in the exhibition space, which I only was for a few seconds, the photographs feel like a safe haven. They are invitations to reminisce, glowing in Ektachrome hues, with the neon lights of downtown in the 1960s appearing like the stained glass of a church.