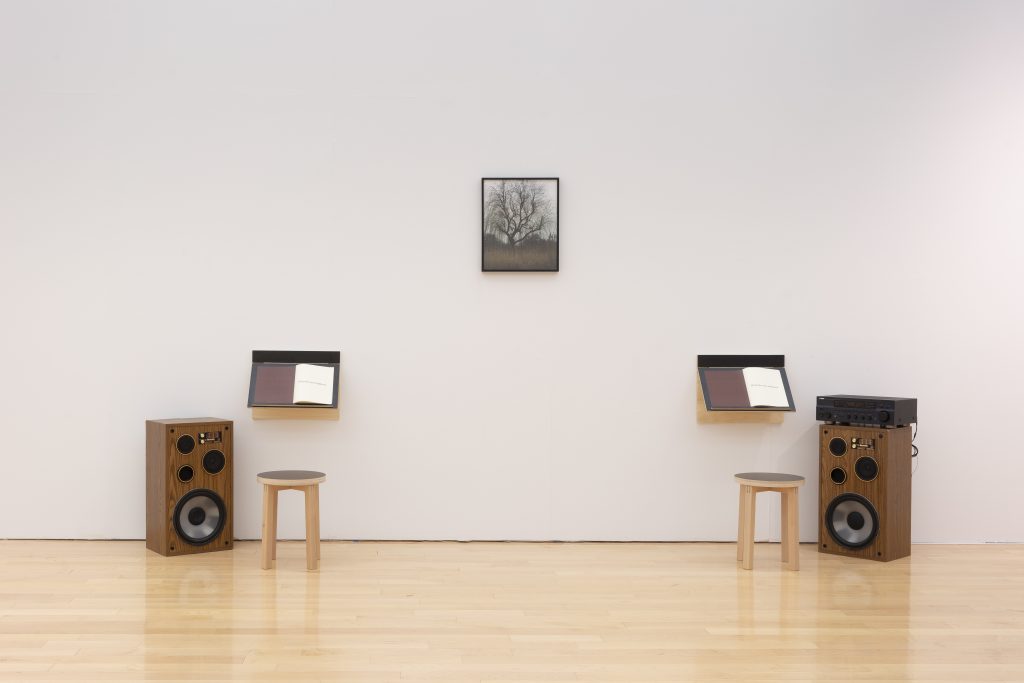 Do you remember when, in 1989, the police sprayed anti-apartheid activists in Cape Town, South Africa, with purple dye, until the protesters got control of the cannon and fired it at the headquarters of the National Party? Our memory of the AIDS pandemic has also been overlooked in articles over the past year-and-a-half, which have repeatedly made claims that the only pandemic in the United States known to have caused more fatalities than COVID was the Spanish flu epidemic of 1918, which reportedly killed 645,000. Meanwhile, as of 2018, more than 700,000 people in the country have died from HIV-related illnesses. In our twenty-four-hour-news-cycle world, where work and life are blurred and it’s unclear if our time is ever truly ours, we’re all but forced to forget headlines almost as soon as we read them. So much is begging for our attention.

It is this reading of time, history and memory, where time marches forward and progress is always linear, that the works in ”What Flies But Never Lands?,” a remarkable exhibition on view at the Chicago Cultural Center, pushes against.

“The times we live in are so amnesiac,” says Minh Nguyen, who curated the show. “A lot of the works are thinking about history that didn’t even happen that long ago. But it is already something that is sort of pushed out of our public consciousness by the media or the pace that we all have to live under. That’s what drew me to the works, too.” 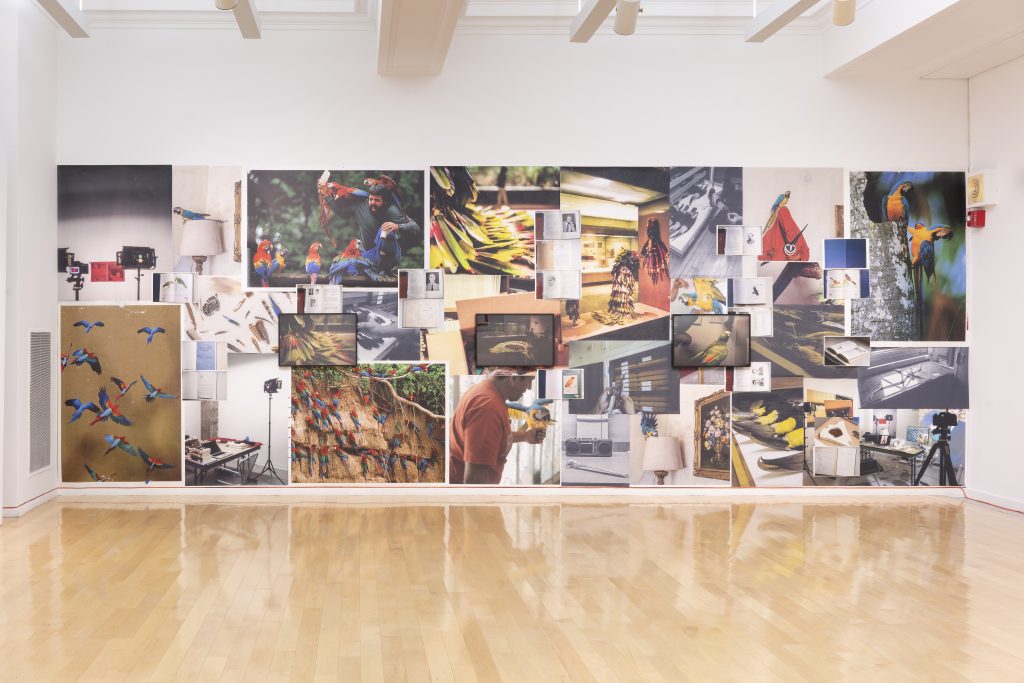 The exhibition is organized around three broad themes, each installed in its own room. Swirl is perhaps the most conceptual room; the exhibition didactics prove very useful at providing context for the deeply researched works on view, as does an exhibition website (whatflies.link). Ana García Jácome’s piece takes its inspiration from a historical archive in Mexico, where a man wrote to the government asking them to fund an exhibition recognizing him as the first doctor to cure polio. The man’s claims were dubious, and Jácome uses the record as a jumping-off point to create her own version of the proposed exhibition, with doctored photos and archival material. The language and discourse around polio offers a striking comparison to our current pandemic, with the artist drawing attention to the ways disability is villainized.

Jacobo Zambrano-Rangel’s work is a photographic installation that looks at how American businessmen used their interest in the birds of Latin America as a way to exploit the region for economic gain. Colorful images of macaws from a National Geographic article are blown up on the wall alongside historical photos of collected artifacts. The beauty of the birds draws the viewer in. Upon closer inspection you can see excerpts from a book by William H. Phelps, an ornithologist who moved to Venezuela at the turn of the twentieth century. Wall text notes that Phelps became an outsized businessman in the country, starting coffee plantations and importing American goods. He also owned the largest private bird collection in the world, a man intent on conquering nature. An accompanying video further explores the colonial past of ornithology and anthropology, as a curator at the Field Museum goes through indigenous artifacts in his office. The curator is working to repatriate the items to Brazil, although the U.S. Fish and Wildlife Department first requires every feather to be catalogued, and an institution in Brazil must be willing to receive the items. In the meantime, hunting spears and a beautiful handmade headdress sporting bright orange feathers are stored unceremoniously in cardboard boxes.

Also on view in Swirl is a multimedia work by Imani Elizabeth Jackson and S*an D. Henry-Smith investigating the history and evolution of the song “Black Betty,” juxtaposed with a poem on the black birch tree. 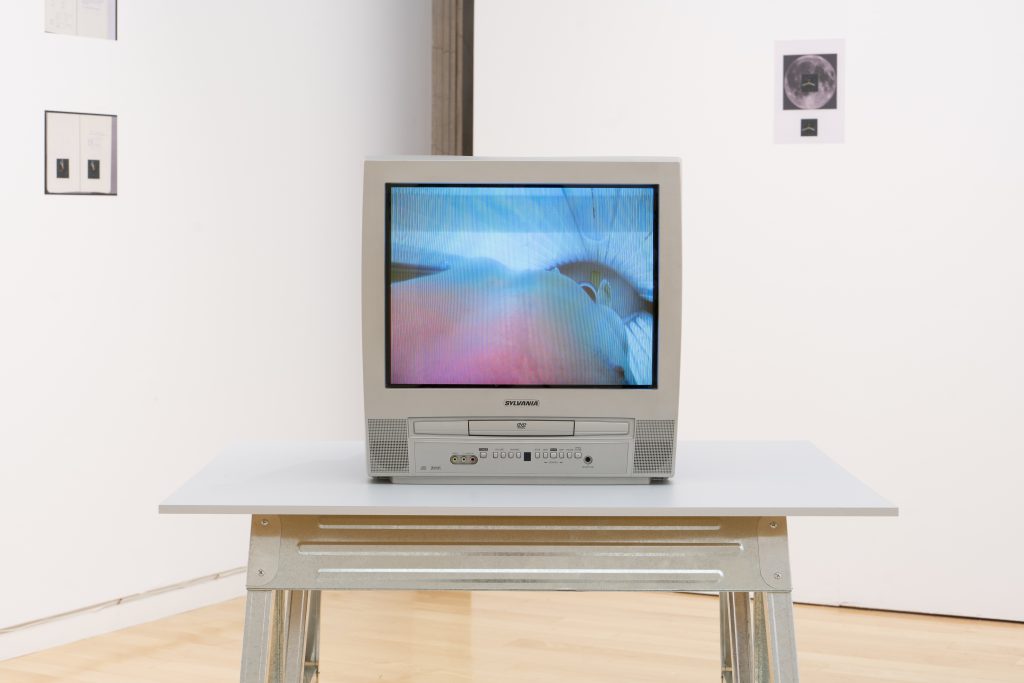 Nguyen says Light was one of the first rooms she envisioned. In it, Max Guy’s ongoing investigations of time and clocks are on view, along with a video of the artist, who is Black, using a tanning bed. The video, “Problem Machine (What’s it like to be dead? What’s it like to die?),” is simple and claustrophobic, with the artist filming his body from within the bed. A fan blows at his feet, while the fluorescent bulbs cast a blue hue on Guy’s naked body; a time-based work where he pays to make his skin incrementally darker. The futuristic feel of the video pairs perfectly with Huong Ngô’s multi-faceted project “In the Shadow of the Future.” In it, three televisions are embedded within a geometric architectural installation on the floor made to evoke the sharp-angled housing complexes in France’s Ivry-sur-Seine. In the video, a character dressed as astronaut Pham Tuân, the first Asian person to travel to space, wanders around the neighborhood, a so-called banlieue rouge or red suburb, where Vietnamese people were resettled after escaping the Vietnam War. The housing units of Ivry-sur-Seine, seen in the video, are mixed-use and dappled with green space, made to encourage community engagement. Scenes of Tuân, interspersed with those of the building and neighborhood, feel unmistakably tied to ideas of utopia, technology and progress. What does it mean for this notable Vietnamese citizen, who was launched into space by the Soviet Union’s Interkosmos program, to be transplanted to a planned community in the suburbs of Paris, inhabited largely by communists from Vietnam? 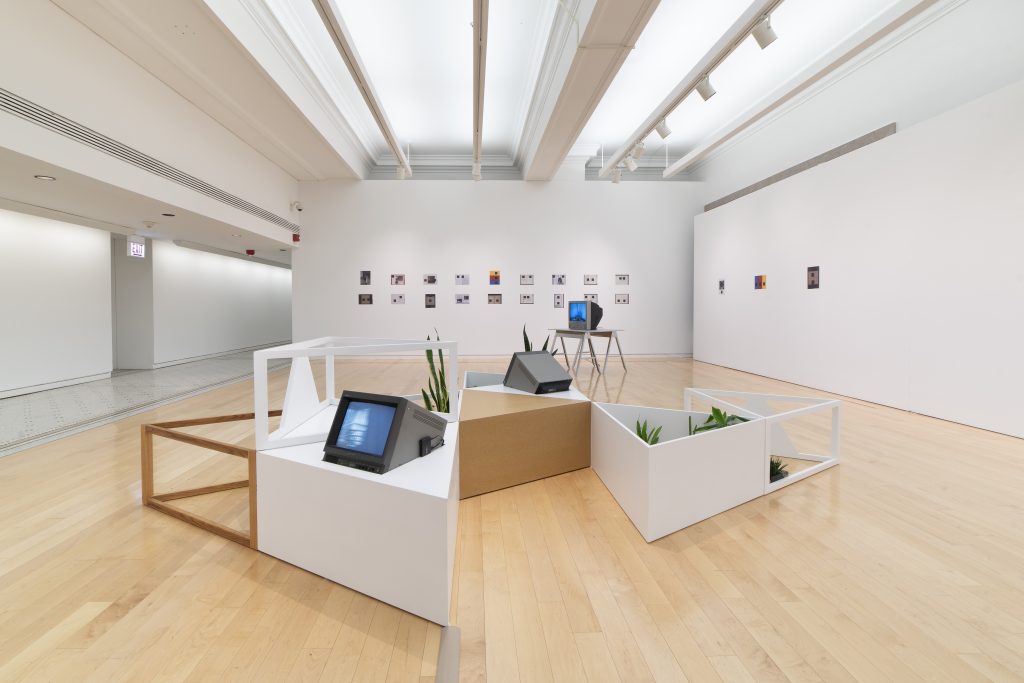 In the final gallery, Ground, carved clay reliefs by SaraNoa Mark are more meditative gestures of time, with the artist making scores of tiny marks in the material using carving tools. Made in earthy shades of brown and beige, the reliefs resemble ancient tablets, marked with many tiny repetitive strokes into gorgeously detailed geometric patterns. Also on view are boxes full of rounded asphalt chunks that washed up on the shores of Lake Michigan and small slate sheets, carved with snippets of conversations that took place among the artist’s community last summer at Hyde Park’s Promontory Point. Through this process, wherein the artist spends a lot of time documenting brief moments, Mark is both creating an archive and meticulously recording history, connecting moments past and present to the future, wherein gallery visitors experience these conversations anew. 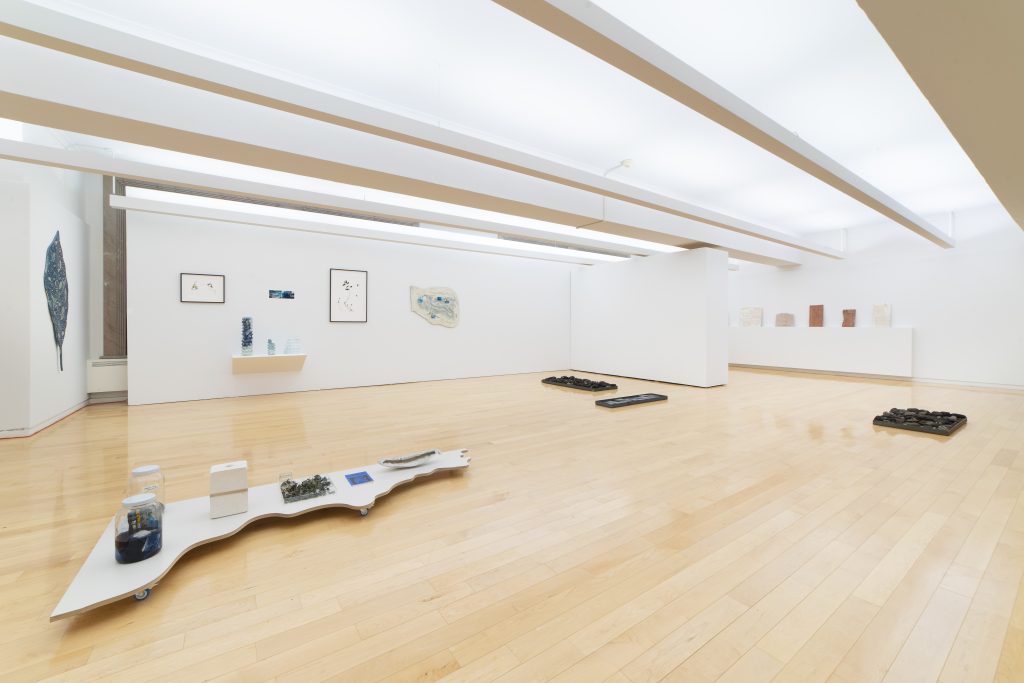 Nearby a variety of pieces by Cathy Hsiao center around the political and historical associations with the plant dye indigo, which has been used as a natural dye for centuries in Southeast Asia and other parts of the world. Images from the recent protests in Hong Kong, where demonstrators were shot with water cannons filled with blue dye, are set alongside dried leaves from indigo plants and cast sculptures colored with recycled indigo dye water. Oversized wall-hung sculptures of the faces of lucky cats evoke a favorite candy from the artist’s youth, one of several works that are an homage to the Han tradition of returning “to one’s mother’s house to give birth.” For this project, Hsiao planted indigo seeds to create these works, parts of the plants are pressed into frames on the wall. By cultivating a practice of regeneration and care, Hsiao turns the negative connotation of the indigo used in state surveillance and repression into one that’s creative, imaginary and perhaps even liberatory. An accompanying webpage features interviews with Hong Kong protesters and a sound collage from the uprisings. 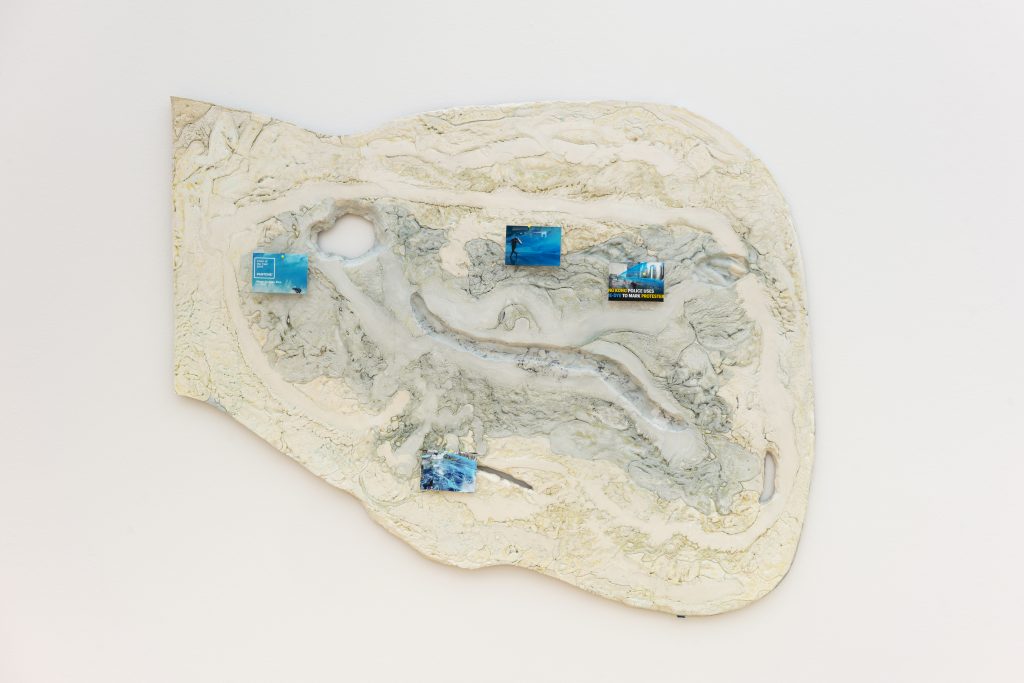 As Hsiao and the other artists show, the past is always present. The actions of governments and institutions reverberate exponentially, colonization and exploitation tactics are reused and refined throughout the world. States share and copy ideas for repression, from marking protesters, from South Africa to Hong Kong, to limiting the freedom of the press, which is happening now, egregiously, in Myanmar and more insidiously in the United States, through methods like denying tenure to those whose speech threatens the ruling class. The more we can strengthen our collective consciousness and our ability to hold the powerful to account, the better position we’ll be in to recognize and deny oppression before the worst of our historical moments repeat. (Kerry Cardoza)


“What Flies But Never Lands,” at the Chicago Cultural Center, 78 East Washington, through September 5.