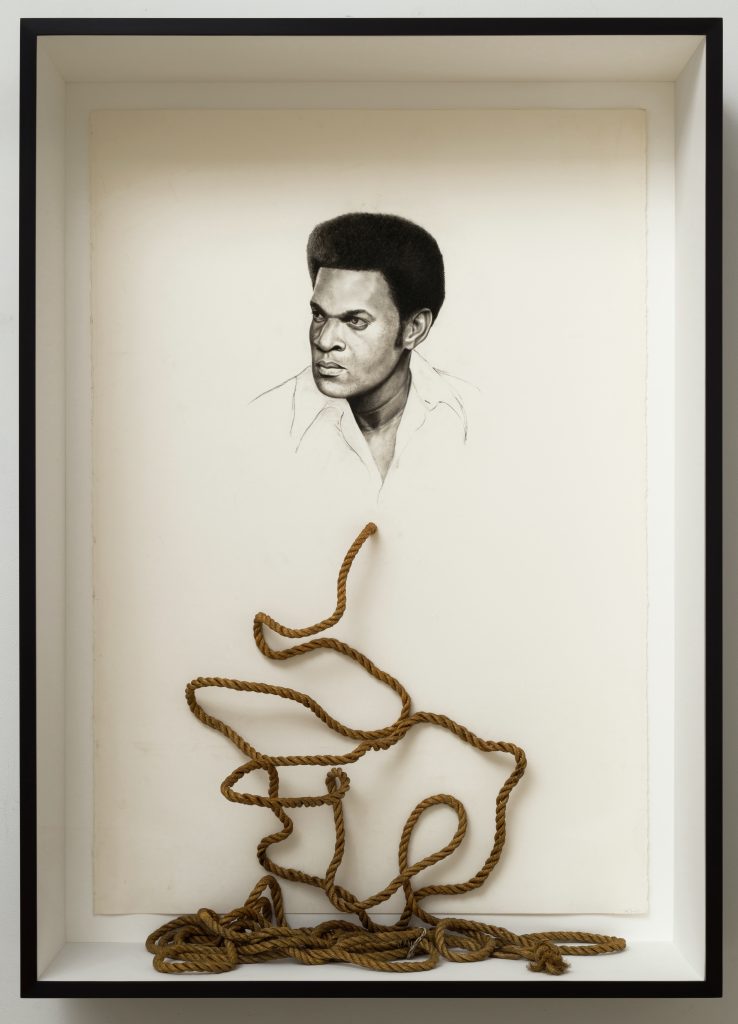 On the history-rich walls of the South Side Community Art Center’s first-floor gallery hang Whitfield Lovell’s tenderly drawn portraits of early- to mid-twentieth-century African Americans. In these stark drawings, made with conté crayon on white paper, Lovell reanimates the lives of his unknown subjects, pairing each with a found object that hints at both personal and collective history.

The faces of Lovell’s subjects are rendered in such intricate detail that they seem almost three-dimensional. In the artist’s care, the subjects appear stately and dignified—on one man, a fedora-like hat is placed just so on his head, a female sitter wears a delicate veil over her face. While the faces are fully formed, Lovell leaves just a hint of a bust, although the little attire that is visible usually offers some clue as to the time frame of the image. He sources photos from between the Emancipation Proclamation and the civil rights movement. As the exhibition text notes, his work is made partly in a “desire to recuperate lost stories of Black existence,” inspired by the gaps in his own family history.

The drawings are installed in shadow-box frames, the found objects either sit on the bottom of the frame or float right below the bust, casting shadows on the paper and adding a sculptural quality. The objects, which are from the same time period as the sitter, invite the viewer to create their own narrative about the subjects. “Spell No. 12 (Black Maybe)” depicts a man with a serious expression, eyes fixated on something in the distance. His manicured Afro, sideburns and unbuttoned, wide-collared shirt suggest the photo was taken in the 1960s. Right below his chest hangs a thin brown rope, snaking down the frame as if in the midst of being lassoed, then pooling at its base. The rope could represent a myriad of meanings, and Lovell seems to prod the viewer to interrogate what assumptions we might make and why. 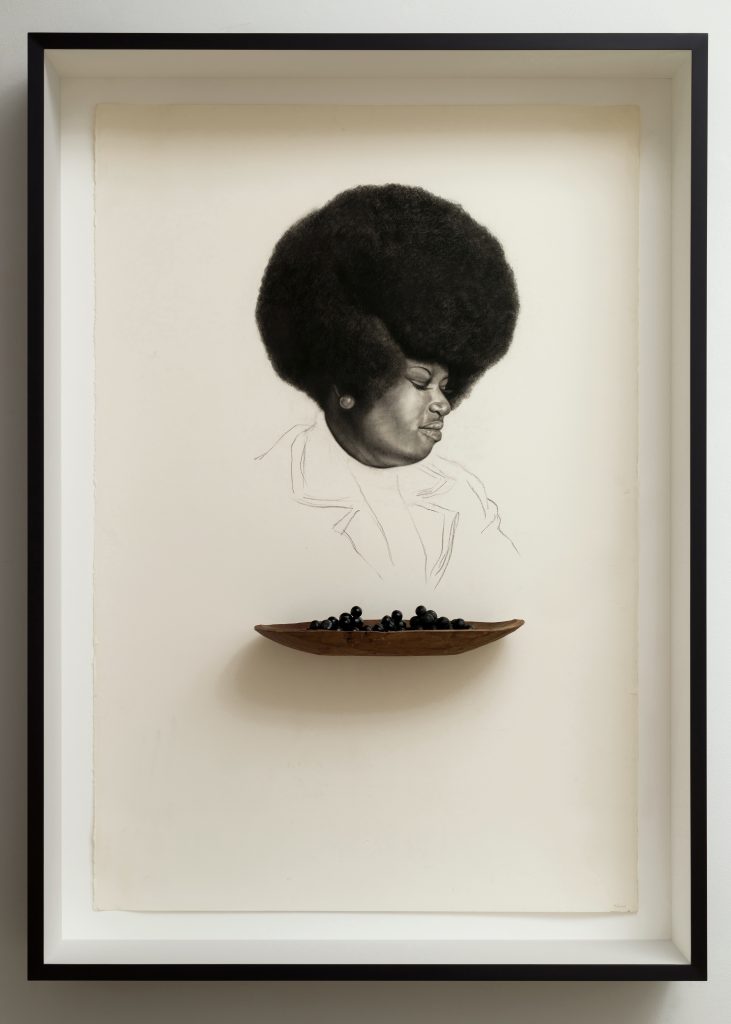 In another work, a young man with close-cropped hair and sculpted cheekbones is seen in profile (his image perhaps taken from a passport photo), while below stand small American flags on sticks, including one that’s missing its Stars and Stripes. The vintage flags point up at different angles, as if stuck in the ground at someone’s headstone; indeed, Lovell’s care and attention to these people give the works the feel of an altar, a sacred place where they can be remembered.

The exhibition is part of “Toward Common Cause,” a multi-site collaboration staged to commemorate the fortieth anniversary of the MacArthur Fellows Program. (Twenty-nine artists with work at venues throughout the city are past awardees.) Lovell, who won in 2007, also has work on view at the Stony Island Arts Bank. I highly recommend seeing his work in the context of the SSCAC building, which has seen so many crucial moments in African American history and has nurtured so many emerging artists and community leaders, both known to us and unknown, for now. (Kerry Cardoza)

“Whitfield Lovell: The Spell Suite” is on view at the South Side Community Art Center, 3831 South Michigan, through September 25.