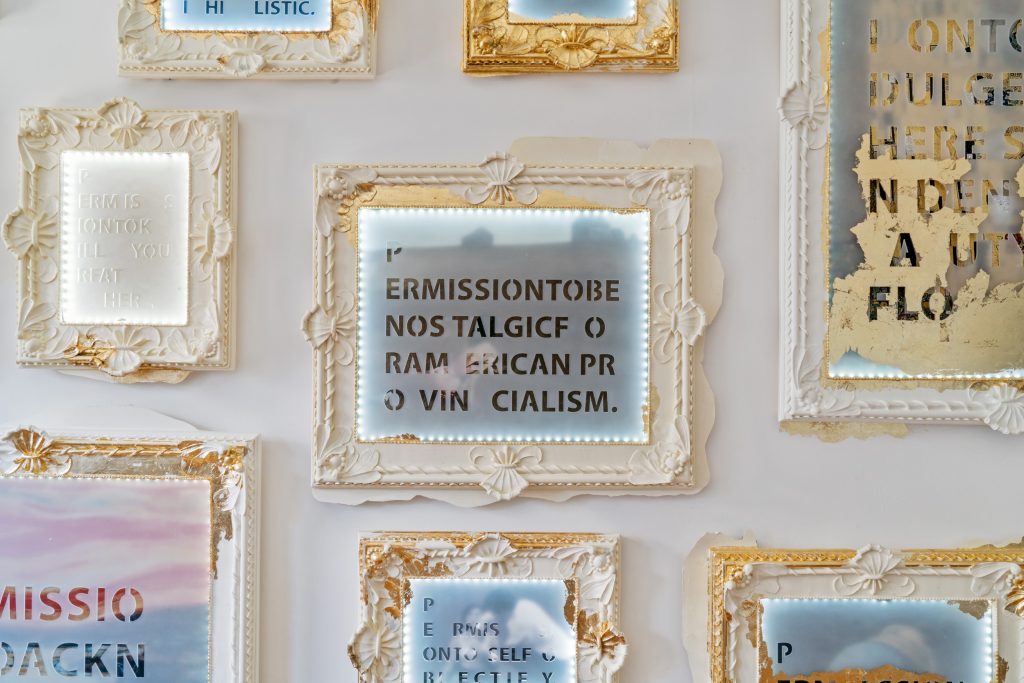 When a work of art enters the public consciousness, when it becomes ubiquitous enough to grace a college dorm poster or stand as a reference point for an entire genre or moment in time, it becomes almost entirely divorced from its original context. Thus “La Gioconda,” which measures only two-and-a-half feet by one-foot-nine inches in real life, is of epic proportions in our minds, adorning eyeglass cases and tote bags, and inspiring an untold number of caricatures and knockoffs.

This question of cultural legibility is at the heart of “Soft Power. Hard Margins.,” Nyeema Morgan’s first solo exhibition in Chicago, which is on view at artist-run project space Table. On the walls hang prints of thirty-five of the most canonical works in the Western art world. Enclosed in neoclassical frames, the paintings are obscured by panes of frosted plexiglass, in which authoritative phrases have been cut out, evoking what sort of permission the work has granted the culture at large. “Soft Power. Hard Margins. (1665),” is of Vermeer’s “Girl With a Pearl Earring,” on which Morgan has printed “Permission to Idealize Conventional Beauty.” Though the words themselves are not quite that legible, they are broken apart like a line of avant-garde poetry. The viewer has to look hard, both to identify the work and to make sense of the message.

The paintings are further obscured by splashes of gold leaf, which sometimes spill onto the wall behind them. In a print of Michelangelo’s “David,” the sculpture’s entire head is washed away in gold. The gold leaf and ornamental frames both seem to be poking fun at the gilded galleries where the original works are on display. These powerful institutions have an outsized role in granting freedom of expression through art, deciding who that freedom extends to and how it gets to be expressed, a concept introduced in the gallery text via an Adrian Piper quote. 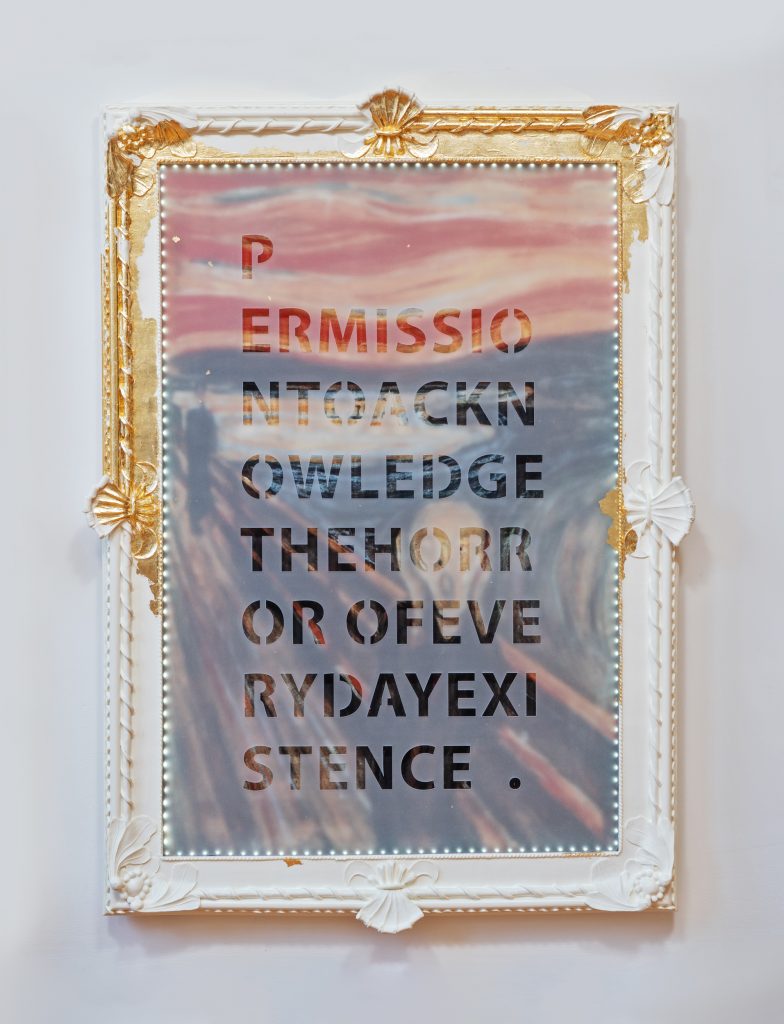 The authoritative language that Morgan uses also plays with that cultural power. In a direct, Jenny Holzer-esque tone, Morgan cleverly evokes the omniscient narrator of news media or museum didactics. On a print of Andrew Wyeth’s “Christina’s World,” she writes “Permission to be Nostalgic for American Provincialism.”

By obfuscating the works, Morgan hopes the viewer will consider how quickly we read images versus text. Upon being presented with text, we immediately try to read it, though the presentation here forces us to slow down. Similarly, many of us might instantly clock these culturally significant works. The artist is trying to disrupt that recognition, and get the viewer to question our own position in relation to the image.

The images are further launched into objecthood by a string of lights that line the inside frame of each work. “I guess it’s actually nodding to that whole painting-as-portal metaphor,” she says. “It’s seen as this portal, this threshold into another reality.” But here you can actually turn the works off, as if turning out the artwork’s cultural luminosity.

Table is run by Kyle Belluci Johanson; the gallery is his dining room, a large table occupies the center of the room. As part of each exhibition, the artist invites a small group of people to Johanson’s house for dinner, where they engage in lightly moderated conversation, which Johanson later transcribes. Morgan’s piece fits right into this discursive project—the pieces are hung salon-style, and are printed in size order with the most culturally important works appearing the largest. In this setup, Johanson is granting his own cultural permission: permission for the artist to experiment, permission to challenge institutional power dynamics. In Morgan’s case, as the artist put it herself in “Soft Power. Hard Margins. (1504)”: “Permission to be Masterful.” (Kerry Cardoza)

“Soft Power. Hard Margins.” is on view at Table, 3240 North Springfield, through September 5.