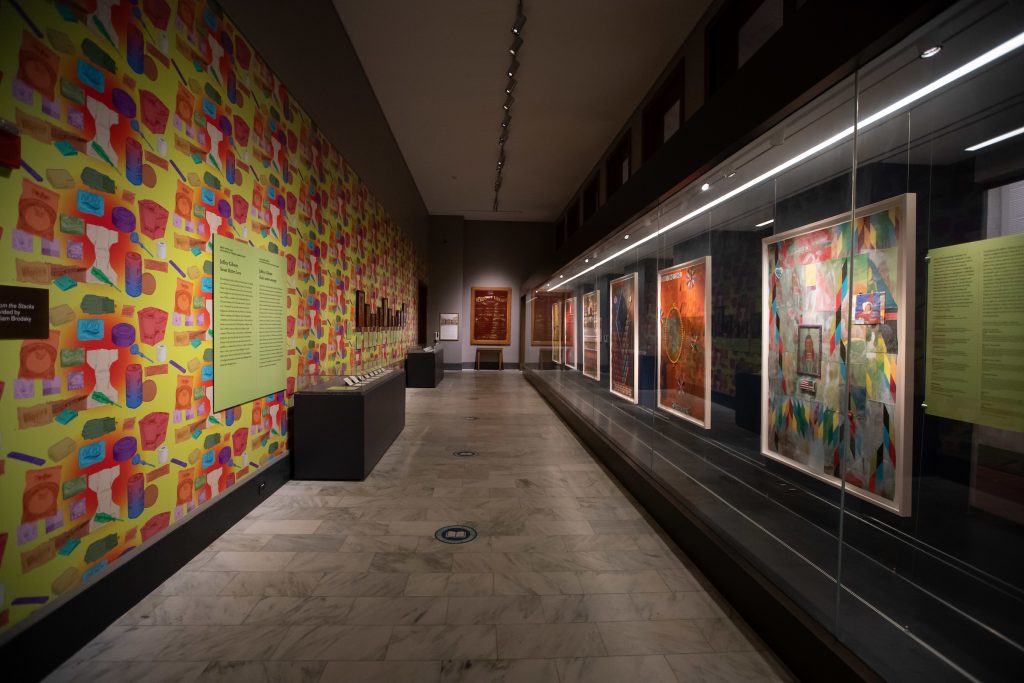 “Sweet Bitter Love” at the Newberry Library is an exhibition of new mixed media work by Jeffrey Gibson, whose core theme is how Native Americans have been brought into and represented within cultural institutions. Gibson, a multidisciplinary artist and craftsperson, created new works in response to famous ethnographic portraits of Native Americans painted by Elbridge Ayer Burbank that, at the turn into the twentieth century, were influential in characterizing Native American peoples to the broader American public.

E.A. Burbank was the nephew of the Chicago businessman and philanthropist Edward Ayer, who made a fortune in the nineteenth century by supplying lumber to build the rapidly expanding railroad system. Burbank traveled to Oklahoma in 1897 when his uncle commissioned him to paint a portrait of the famed Apache chief Geronimo, who was then living in captivity as a federal prisoner at Fort Sill. During the next few years, Burbank continued traveling throughout the West and went on to paint several hundred Native American individuals representing 125 different tribes.

In “Sweet Bitter Love,” a suite of Burbank’s portraits are installed face-to-face with the new works created by Gibson that absorb and remix these images. Burbank’s portraits vary in size but are generally intimate in scale. When one takes a closer look, it would seem that the artist took care to represent each of his subjects in a respectful and dignified manner. They don’t come across as blatant caricatures. One notices that almost all of them show their subjects in traditional regalia. We are used to seeing images of Native Americans like this, so it doesn’t seem obviously pernicious.

On the one hand, Burbank was regarded by contemporaneous press as having a sensitive artistic eye for his sitters. An 1899 piece in the Chicago Daily Tribune assumes that most Chicago art lovers have seen Burbank’s portraits and assures that the artist “believes firmly in the Indian’s virtues being the same, if not superior in a crude way, to those of the white man.” The curatorial voice in “Sweet Bitter Love” encourages the viewer to question Burbank’s anthropological authenticity, stating that he foregrounded his subject’s physical characteristics (including tribal regalia and facial features) as cultural and racial signifiers. The wall text emphasizes that Burbank asked many of his sitters to wear their tribe’s ceremonial clothing, though they seldom dressed that way in their daily lives.

Again, the element of coercion is not apparent in these portraits–how can a person who poses for a portrait of their own volition sit still in compliance for hours and even days, and do so with their body contained in clothing they do not want to wear? Burbank’s personal recollections as told to a reporter contain certain relevant details:

“How did I persuade them to pose? Flattery? A little, perhaps, but here are your best persuaders,” jingling big silver dollars together. “I have established a regular tariff among them. So much for a plainly-dressed Indian; so much more for one in war or dance costume… Sometimes all your money and all your prayers won’t induce them to pose in a ceremonial dress.”

The artist’s recollections of his persuasion strategies provide some hints at the complexity and ambivalence of the motivations that may have been part of his sitters’ decisions to pose for portraits. One sitter who went by the name Burnt-All-Over, by Burbank’s account, beseeched the artist for “pose work” and was exceedingly grateful when granted the opportunity to earn a few dollars. Another sitter known as It-Say-Yo brought along traditional regalia, in full violation of his tribe’s prohibitions against doing so. Burbank recalled:

“[W]e locked the door and soaped the windows carefully, so that no one could see in from outside. Usually I worked with such a crowd of copper-colored faces peering in at the low windows that they obstructed the light. If they had known what It-say-yo was doing they would have flogged him till the blood came.”

The more one reads about E.A. Burbank, the more one finds that he both sought out those he felt were distinctive subjects–dismissing those who appeared “too civilized, [who] live round in towns”–and instead gravitating toward “gorgeous costumes and weird ceremonies” that he felt were worthy of ethnographic and artistic documentation.

And while Burbank boasted of striking up friendships with quite a few of his Native American subjects, it is difficult to ignore the tone and language he uses to characterize some of his sitters as definitively other to himself and to his idea of American civilization, as exemplified in this recollection of observing the Soyaluma, a winter solstice dance of the Hopi Tribe:

“It was the strangest thing you can imagine. You would not believe such a scene possible in America. There we were in a kiva or cave, illumined only by firelight, across one end an altar heaped with artificial flowers, which the Indians make cleverly out of corn husks and wool; in the center a hideous snake’s head; before it grotesque figures paraded and leaped and danced; figures gaudy with paint, bustling with feathers, rattling with gewgaws, horrible with monstrous masks devised by a savage imagination.”

Seeing Burbank’s paintings today–in his selection of subjects as well as the manner he painted them–one cannot fail to acknowledge the artist’s attitude of fascination mixed with repulsion toward Native Americans, his most famous subject matter. Regardless of the rapport and potentially genuine bonhomie that the artist may have established with a number of his subjects, one arrives at the conclusion that it was the eye and the hand of the painter who controlled how his subject would be shown. The images we see have been filtered through Burbank’s perspective. Even knowing this, one still searches for the light of authentic feeling in the expressions of the people that Burbank painted, some meeting the artist’s gaze (and our gaze) directly, some averting their eyes. One wonders how it must have felt to sit still as their likenesses were captured by this artist, a descendant and member of the pale-faced race that usurped their lands and homes. How much did they have to suppress a sense of cognitive dissonance, a sense of despair caused by the dispossession resulting from living in the aftermath of settler colonialism, and now sitting for two dollars a day–or more if you were willing to wear garments that reflected and satisfied the other’s imagination of you? 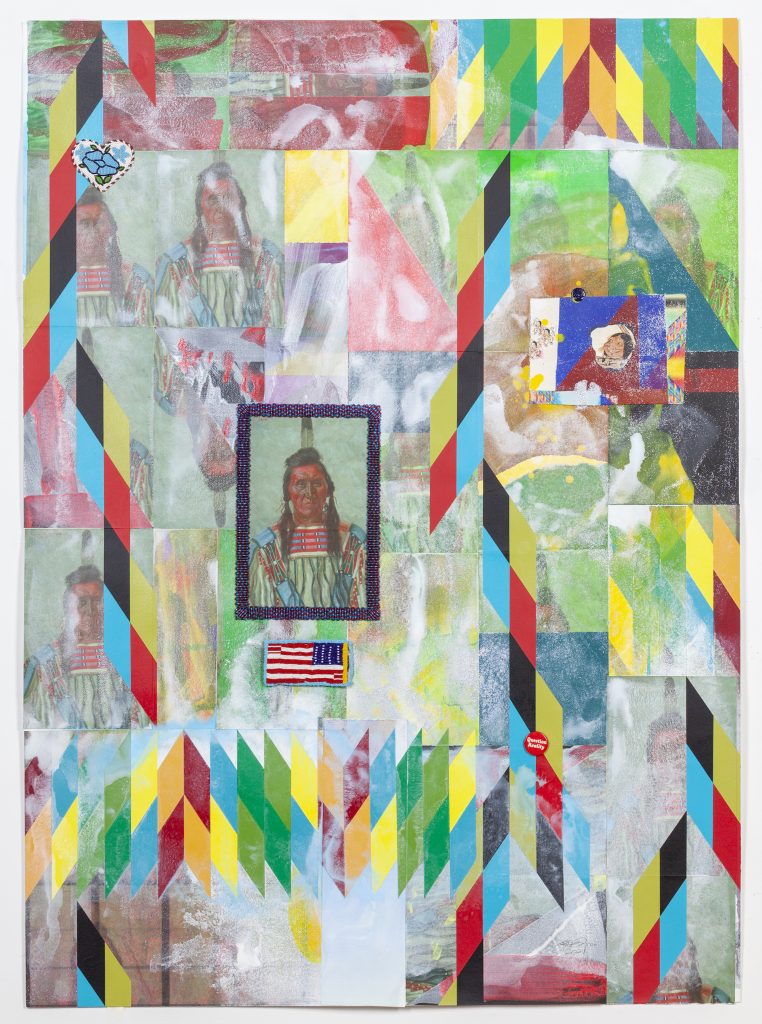 “Chief Pretty Eagle” by Jeffrey Gibson/Image courtesy of the artist

More than a century after E.A. Burbank painted his ethnographic portraits, contemporary artist Jeffrey Gibson (b.1972), a member of the Mississippi band of Choctaw Indians and of Cherokee descent, reengages with these images, challenging the ways in which they historicized Native Americans and propagated the notion that Native Americans were a “vanishing race.”

Hanging directly across from the eponymous portraits that inspired them, “Chief Pretty Eagle” and “Pahl-Lee” are among the images reinterpreted by Gibson. Chief Pretty Eagle (1846-1903) was a leader of the Crow Nation when the United States Army invaded their ancestral lands. Chief Pretty Eagle is equally remembered for heroism in war against the tribe’s traditional enemies and for traveling with a delegation that met with President Rutherford B. Hayes that successfully advocated against the sale of Crow reservation lands. 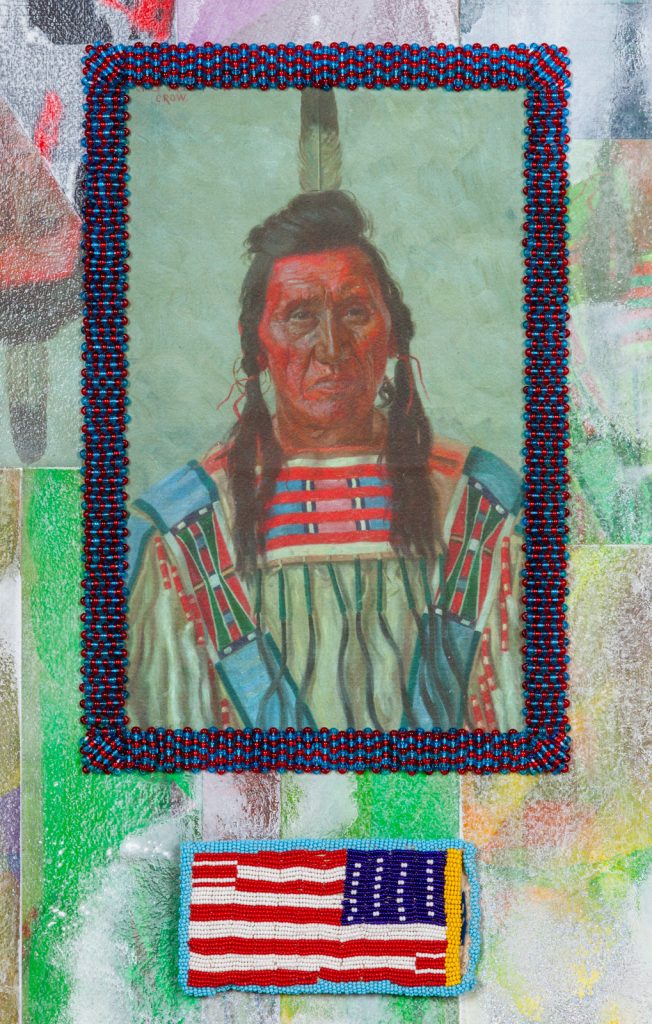 In Gibson’s rendition of “Chief Pretty Eagle,” the Chief’s likeness, as painted by Burbank, is simultaneously multiplied across a rectangular grid and obfuscated behind washes of acrylic paint. Competing with, or perhaps upstaging, the Chief’s image is a vibrant geometric composition overlaid on the paper’s surface, painted in a high-keyed palette of yellows, reds, blues, greens, punctuated occasionally by black. In the upper right quadrant, there is a composition within a composition, in which a cartoon caricature of a smiling Indian face occupies its own prismatic vignette. While blending into the shimmering surface, this vignette functions like a small window into an unstable, glittering fantasy. Elsewhere strewn across the canvas, there are selective collage details of a beaded American flag displayed in reverse, a beaded heart with blue flowers, and a found red pin that says “Question Reality.” 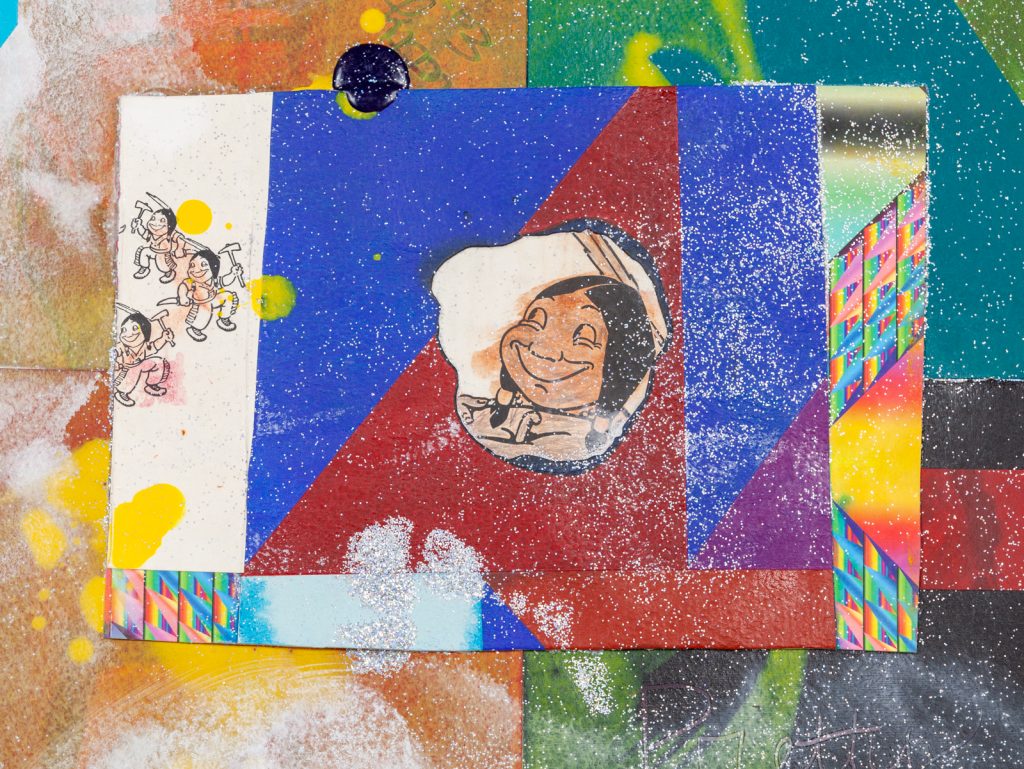 Gibson’s absorbing and reworking of “Chief Pretty Eagle” exemplifies a hybrid visual vocabulary he has honed through for the past decade: he simultaneously incorporates patterns, colors, materials and practice of craft from Native American art and frequently works in geometric abstraction that relates to contemporary Western and global art traditions. Gibson received a BFA from the School of the Art Institute in 1995 and an MA from London’s Royal College of Art in 1998. In 2010, he seriously questioned his desire to continue making art, but was able to reach a personal breakthrough in which he found ways of bridging Native American identity and the contemporary art world. Less than a decade later, Gibson received the prestigious MacArthur Fellowship. He is described on the MacArthur Foundation website as a visual artist who is “forging a multifarious practice that redresses the exclusion and erasure of indigenous art traditions from the history of Western art as it explores the complexity and fluidity of identity.”

In a recent interview about “Sweet Bitter Love,” Gibson said of these Burbank-inspired works:

“Initially, I thought it was my responsibility to honor the people in the portraits. But then I started seeing the portraits as intersections of many narratives. And I am my own intersection. I thought how, with artists, whatever we make is truly a reflection of us. I eventually realized that what I’m making in response to Burbank is about me.”

This is the same point that the “Sweet Bitter Love” exhibition makes about Burbank—that the portraits he made were first and foremost a reflection of himself rather than true reflections of Native Americans. In choosing to use these portraits that are in the Newberry’s collection as a point of departure, Gibson wanted to examine “who I am in relationship to this type of portraiture”; in other words how these portraits worked to define and inscribe Native American identity for the past century and, ultimately, how the artist has defined himself in relation to these portraits. “I’m not so much pushing back on the Burbank portraits as trying to open them up,” he concludes. 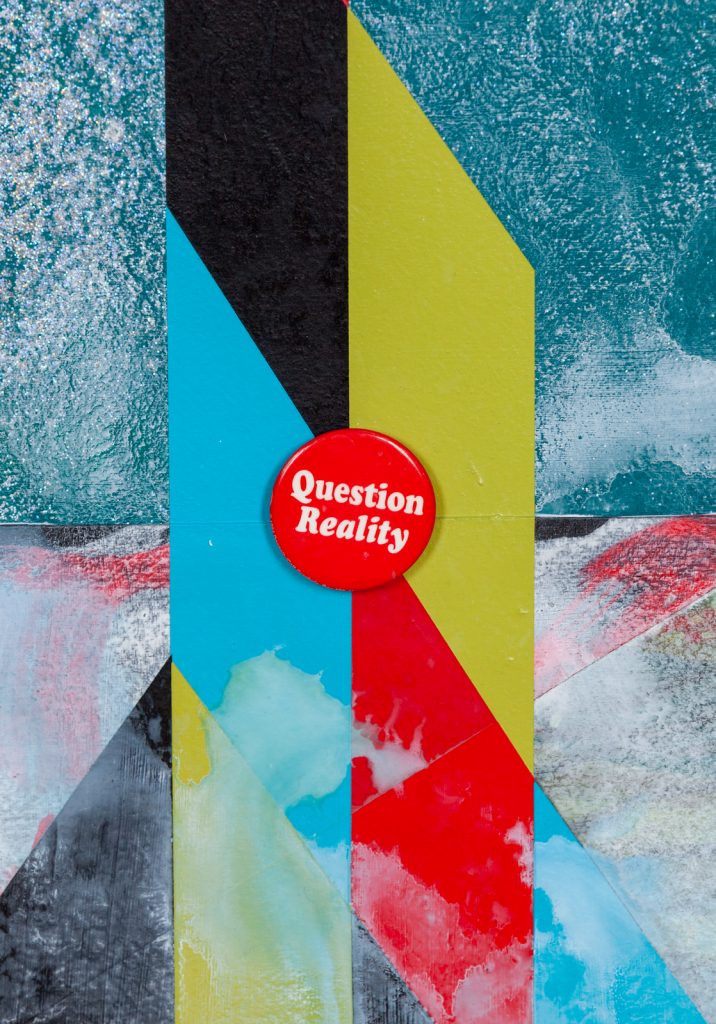 “Sweet Bitter Love” is effective at “opening up” the Burbank portraits, in the sense that juxtaposing these portraits to work by a contemporary artist who has Indigenous heritage, whose ancestors persisted through the violence of settler colonialism, pushes us to reconsider these portraits with fresh eyes. While Gibson asserts his own work is not solely about honoring the people in the portraits, much of the potency in this exhibition nonetheless comes from encountering or reencountering those individuals whose complex sorrows and joys are only fleetingly conjured by their portraits and the texts that briefly summarize who they were. They remind us of the past that is still the firmament of the present, that refuses to be silenced.

The exhibition’s title, “Sweet Bitter Love,” is borrowed from the name of the final song on Roberta Flack’s “Quiet Fire,” an album released in 1971 (the year before Jeffrey Gibson was born). In all their vivid layers and dazzling colors, Gibson’s works give off an air of optimism, yet in the melancholic song, Flack sings tenderly of a love that has left her with more pain than the joy it once brought.

The allusion to the Flack song is a small piece of Gibson’s larger project of resisting marginalization by situating himself as both consumer of contemporary culture and an artist who actively shapes this culture. As to the song itself, its soul is suspended between optimism and defeat. The protagonist’s hopes are completely gutted, their former dreams are dispelled. Their resilience has already been tested in ways that many others will never experience.

“Sweet Bitter Love” is a collaboration between the Smart Museum of Art at the University of Chicago and the Newberry Library, as part of the “Toward Common Cause: Art, Social Change and the MacArthur Fellows Program at 40” initiative. It is on view at the Newberry Library, 60 West Walton, through September 18.