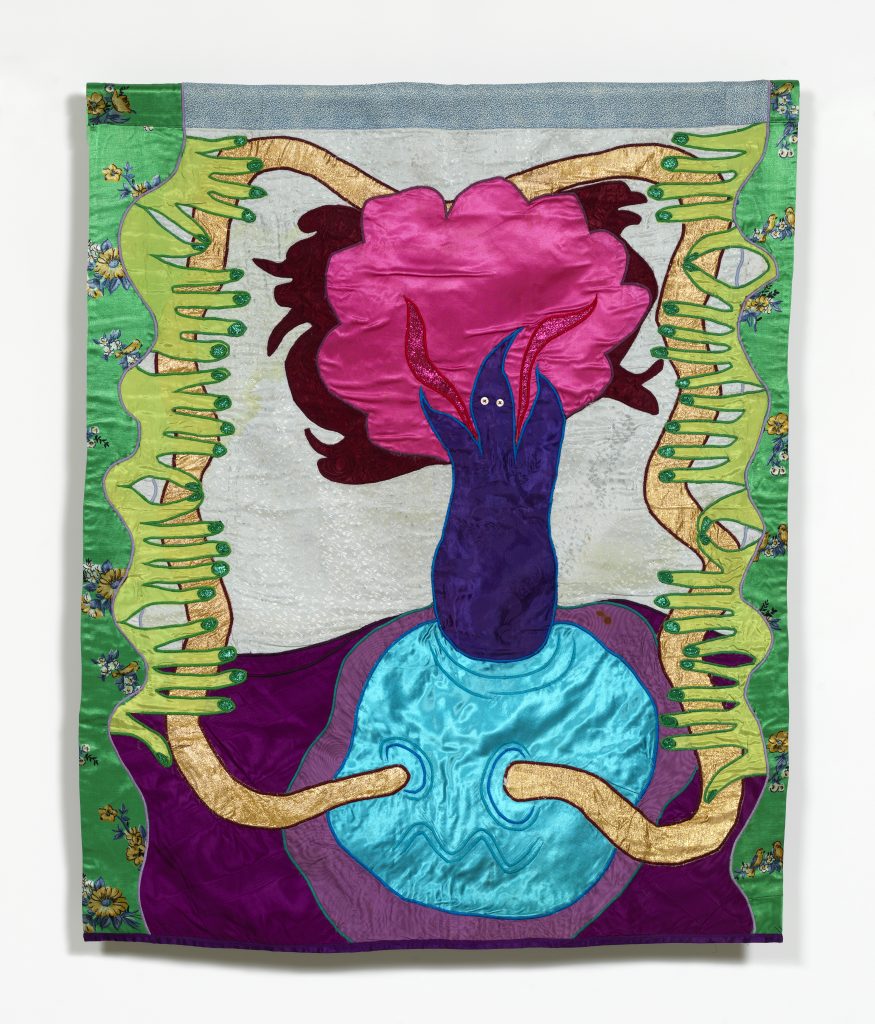 From the late 1960s to the early 1980s, the bulk of the album covers for the work of musician and performer Don Cherry were visual feasts of psychedelia, filled with vibrant colors, twisting figures, mystic symbolism and spiritual koans and texts. The album covers, done by fashion designer-cum-artist and performer Moki Cherry, were a perfect visual synthesis of Don’s music of this period: colorful, collaborative and collage-like in global influence and musical character. Moki’s works not only represented an ideal synergy between the visual and sonic, but also art and life. Moki’s fabric pieces and paintings depicted international travels with Don and their children, sights seen and people met, ideas encountered, and many of her tapestries were featured prominently in live performances and throughout the commune-like school house she and Don bought in Stockholm in the 1970s. In short, Moki’s art was diaristic and totalistic, functioning in a myriad of ways in all facets of her life, work and family.

Earlier in 2021, the creative and romantic association of the Cherry’s during the 1970s, and their general utopian sensibility toward life and art, was the subject of an extensive exhibition at New York project space Blank Forms. At “Communicate How? Paintings and Tapestries, 1967-1980,” the focus is squarely on Moki’s art, a difficult endeavor given the interconnectedness of these works to Don (a Moki-designed shirt worn by Don in performances is a highlight of this exhibition). But the goal of “Communicate How?” does not seem to be to ignore the deep artistic relationship between Moki and Don, but rather to present an alternative perspective, one that sees their deeply collaborative partnership told largely through her eyes. 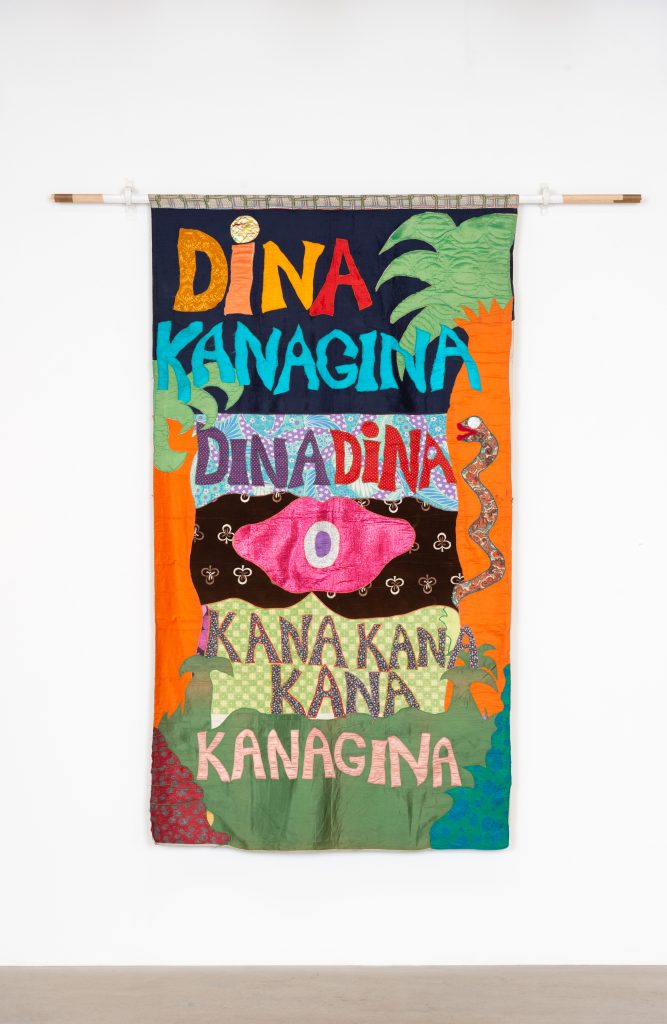 Serendipitously underscoring this ambition is the recurring motif of eyes featured on Moki’s tapestries and paintings throughout the exhibition. On many of her fabric works, wide cartoonish eyes stare directly at the viewer, such as on the face of “Kali” or on the small purple, flame-like creature emerging from a head whose two eyes distend from their sockets into a pink haze. Other fabric pieces feature eyes without faces, such as a lone eye floating in an amorphous pink shape in “Dina Kanagina,” or the two eyes with accompanying mind’s eye that hover within the yellow ouroboros snake in a tapestry made for one of Don and Moki’s many collaborative “Organic Music” performances. These “Organic Music” performances were predicated on using music-making as occasion for spiritual edification, an opportunity to reach a state of higher consciousness through the ecstasy of play. Not simply a formal motif, the recurrence of eyes in Moki’s work indicate her deep commitment to the spiritual at this time both in life, art and family (she and Don were both practicing Buddhists).

While the bulk of the exhibition showcases Moki’s deft handling of this collage aesthetic through her technical mastery of fabric, this tendency is also in her seldom-seen painting work. A large untitled painting from 1970 is an explosion of figures, faces and spaces. In this painting stylized cityscapes bend and burn, a ladder protrudes from a mountain top, and a cascading wall of bricks separate a scene of interior strife, represented by a contorted and fragmented body in a room, from a serene representation of music making along in a garden. There is a lot to take in on this and the other paintings, and the clever way in which Moki combines shapes and colors to blend and blur into other scenes and figures, present a dense but never overdone composition.

It is likely that this will be many people’s first encounter with the art of Moki (and Don as well) and assessing her work in the context of a gallery exhibition—her first in the United States in over forty years—is a valuable entry point into her larger project of an interdisciplinary art and life praxis. “Communicate How?” gives the viewer the opportunity to consider Moki’s works outside of their initial functionary purposes, making clear that these tapestries and paintings have a life that exceeds performance backdrops or record covers. Yet, what persists is something of a hybrid, a reminder that art made for public purposes or vernacular causes can be just as galvanizing as that made for the museum or gallery. Not content to be simply art objects or artifacts of a time and place, Moki’s work in “Communicate How?” are examples of how art can exceed its often-stultifying static position, using an aesthetic of ecstatic vibrancy that invites and piques curiosity. (Chris Reeves)