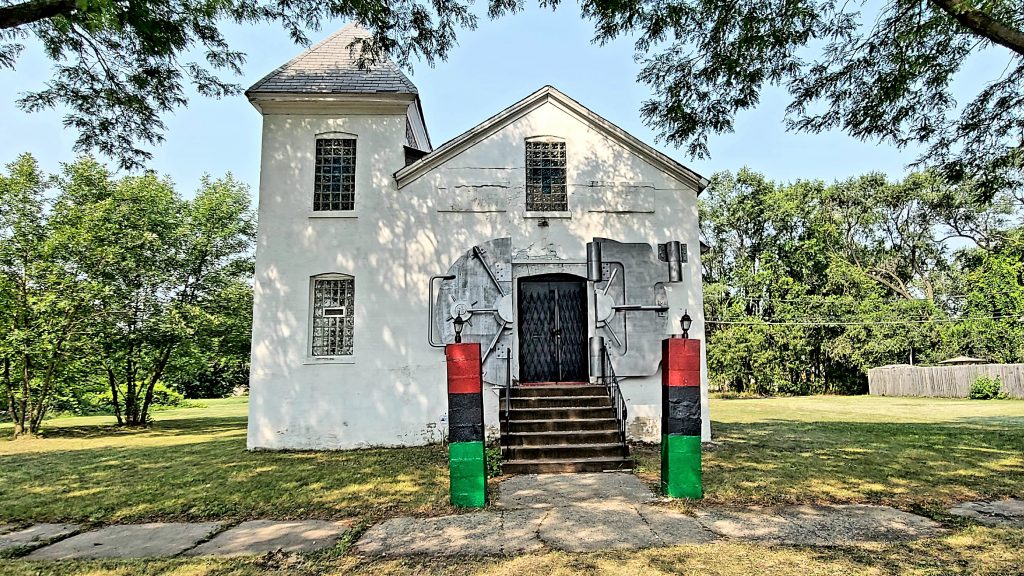 At the intersection of Englewood and Washington Park on Chicago’s South Side, the multiblock campus of Sweet Water Foundation is a laboratory for ecologically and economically regenerative projects. Since its founding in 2014 by Emmanuel Pratt, SWF has used a blend of urban agriculture, art and education to transform spaces and buildings into sustainable community assets.

SWF is one of thirty-five partner organizations for “Toward Common Cause,” an exhibition featuring new and recontextualized work by twenty-nine visual artists who have been named MacArthur Fellows since 1981. “Toward Common Cause” aspires to “explore the extent to which certain resources—air, land, water and even culture—can be held in common; raising questions about inclusion, exclusion, ownership and rights of access.” Pratt is a 2019 MacArthur Fellow and although not an official exhibiting artist, SWF is the platform for interventions by Mel Chin and Iñigo Manglano-Ovalle.

SWF as both site and project takes the curatorial statement from “Toward Common Cause” and adds layers for considering context and value in public and common causes. SWF takes multiple viewpoints from community stakeholders into consideration when adding to SWF’s development. “Toward Common Cause” is no different. Even with Pratt’s MacArthur Foundation affiliation, Manglano-Ovalle and Chin’s installations went through a community-input process of approval before installation. The projects at SWF are, intentionally, not standalone installations in a white-cube gallery space.

Walking onto SWF’s campus, there is an immediate sense of this process. I was greeted by SWF staff, volunteers and community members as I approached the Think Do House. I could smell the nearby community garden, hear the sounds of machinery from the woodshop, see folks building new objects from recycled materials and feel collective energy vibrating out to the neighborhood. I sat in the shade ruminating on SWF’s “We the Publics” manifesto and proposition to “restore democracy and truth in the republic” propped up against a garden shed. Upon meeting Pratt, I was invited into the House for a bite from the garden before heading back outside to see the work on view for “Toward Common Cause.”

Painted in green, black and red (the colors of the Pan-African flag) Manglano-Ovalle’s “Hydrant, 41°47’22.662? N – 87°37’38.364? W,” is nearly camouflaged in the yard and garden in its pedestrian functionality. That is the point. Through a complicated set of bureaucratic gymnastics, the hydrant taps into the public water source running below SWF. The water from “Hydrant” is used for the garden, which is open and available to everyone, and as an artistic gesture. The work is both simple and open-ended, pragmatic and sculptural; accessing the water from “Hydrant” is as much a public performance as a necessity. 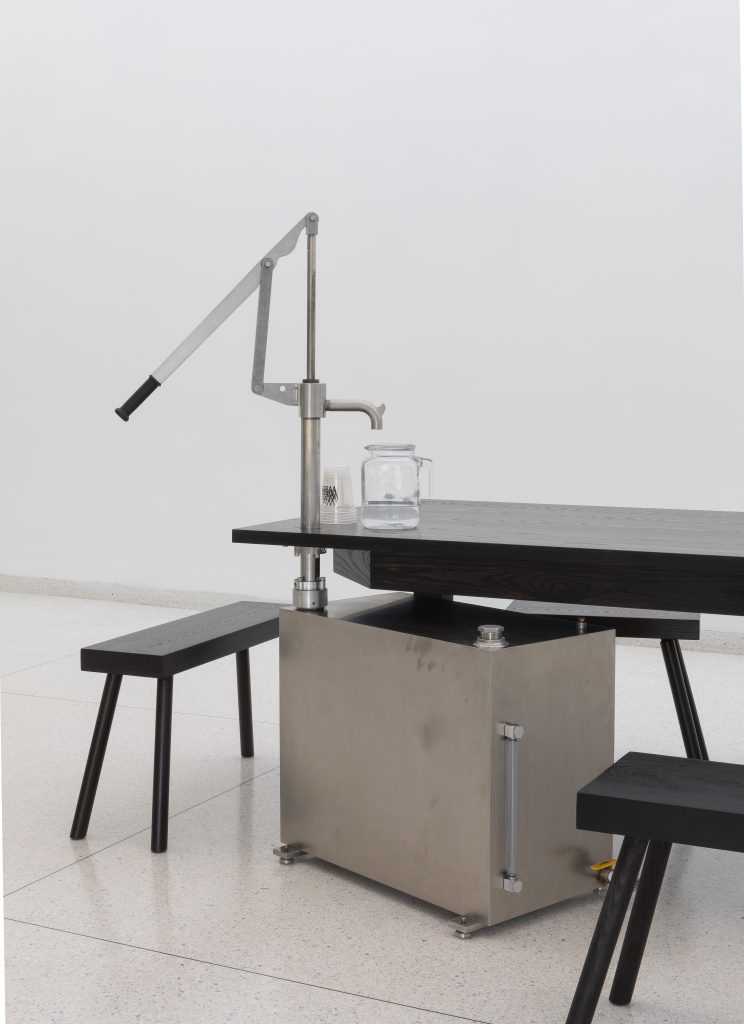 This hydrant is given a particular context at SWF, which expands Manglano-Ovalle’s artistic practice of addressing “humanity’s relationship to the climate, especially its effect on water.” I was reminded by Pratt how water at 57th Street and Perry Avenue holds memories associated with redlining—water is infrastructure controlled by the federal, state and city governments and clean water and water access is one of the many environmental injustices caused by these policies. But, importantly, water is also a source of life. The duality of “Hydrant” is amplified at SWF.

On the tour, Pratt grabbed a piece of kale from the garden adjacent to “Hydrant” and crushed it. The water from the kale dripped from his hand, metaphorically and literally expressing the multiplicity of water as a municipal and nourishing resource. The spigot and the kale speak to what Pratt refers to as “food apartheids.” (“Food desert” is an incorrect metaphor because “deserts” are incredibly complex ecosystems full of life; “apartheids” are forms of systematic oppression.) Everything about “Hydrant” is interconnected with SWF’s larger project, from the permits SWF needed to access the water, to the leaf of kale grown with the water from “Hydrant,” to the eventual consumer who is nourished by the kale. “Hydrant” merges metaphor and historic and contemporary realities. It is remarkable that a steel pipe at SWF can hold such symbolism.

Down the block on Lafayette Avenue, Mel Chin’s newly commissioned “Safehouse Temple Door” is installed on SWF’s soon-to-reopen Civic Arts Church. Atop seven stairs, Chin’s artwork is a gargantuan ten-foot diameter functioning bank-vault door. The circular steel door serves as the front door to the former liturgical space. Two concrete pillars in the same Pan-African flag colors as “Hydrant” are erected at street level as an open gate, and viewers are required to pass through them to see “Safehouse Temple Door.” On our tour, Pratt opened the door like a banker opening a vault. Along this metaphor, Chin’s door provokes questions of value and importantly who is determining value. “Safehouse Temple Door” also serves as one of multiple activation points for the “Chicago Fundred Initiative: A Bill for IL,” a collaborative action focused on lead contamination in water, soil and housing.

The context for “Safehouse Temple Door” on the former Black church is also far from a blank canvas. During the tour, I learned how the church was once a vibrant space for gathering during the Great Migration while, later, urban renewal ripped apart the neighborhood. The Civic Arts Church and Chin’s workable vault door address these overlapping narratives through a community-centric architectural intervention. The two projects, the church and the vault door, in tandem assuage fetishizing art’s role in neighborhood development in favor of granular human-scaled change. Like the rest of SWF’s projects, there is a reminder that brokering with the local is important because, as Pratt reminds, “real people live here.” As such, Chin’s work at the Civic Arts Bank is as much about respecting people and neighborhood as an antidote to erasure and environmental justice.

SWF presents the restorative acts and practices of being present to the everyday life of the public. The same goes for Manglano-Ovalle and Chin’s work in “Toward Common Cause.” Yet, most of the work on view is virtually invisible; it is in the relationship and conversations taking place because of the artworks. SWF and Pratt are doing this work so “Toward Common Cause” has context, value and relevance. Pratt’s final remark, “We are in a perpetual act of becoming,” is a resonant treatise for SWF and “Toward Common Cause.” The art of co-creating a “direct response to the everyday chaos of economic hardships, violence, perpetual poverty, and systemic racism that pervades our communities” is what is truly on view at SWF through Pratt, Manglano-Ovalle and Chin’s interventions. This work at SWF needs to be experienced in real life and in real time to fully grasp its impact. (Alex Priest)

“Toward Common Cause” programming dates, locations and further exhibition details are here.