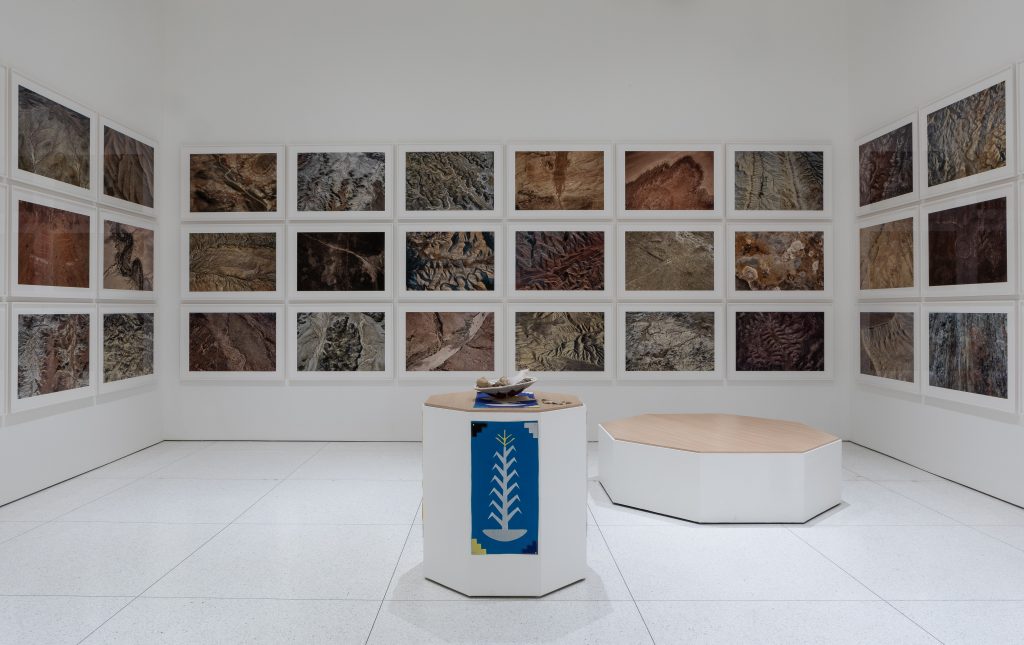 The world of art has become a driving force for social justice and change. The art which we had highly valued and admired for beauty and the artist’s name has made a transition into a grander, deeper form, which we see in the exhibition, “Toward Common Cause: Art, Social Change, and the MacArthur Fellows Program at 40.”

“Toward Common Cause” is a multi-site exhibition that launched this summer and continues through the fall. It celebrates the fortieth anniversary of the MacArthur Fellows Program, in which selected artists have been awarded $625,000 as an investment in their potential and to support their creative endeavors. Since the inauguration of the program in 1981, 942 artists have been named MacArthur Fellows.

“Toward Common Cause” is organized by the Smart Museum of Art at The University of Chicago, the main venue for the exhibition, and Abigail Winograd, the MacArthur Fellows Program Fortieth Anniversary Curator. A coalition of partner organizations have contributed to the initiative through exhibitions, community-based projects, research and programming. “Toward Common Cause” features the works of twenty-nine fellows in nineteen notable solo and group exhibitions held in museums, galleries and community spaces throughout Chicago. Countless organizations and institutions collaborated with the Smart Museum of Art and Winograd, including the Newberry Library, DuSable Museum of African American History, Sweet Water Foundation and National Museum of Mexican Art.

Winograd was invited by the MacArthur Foundation to organize the exhibition in late 2017. 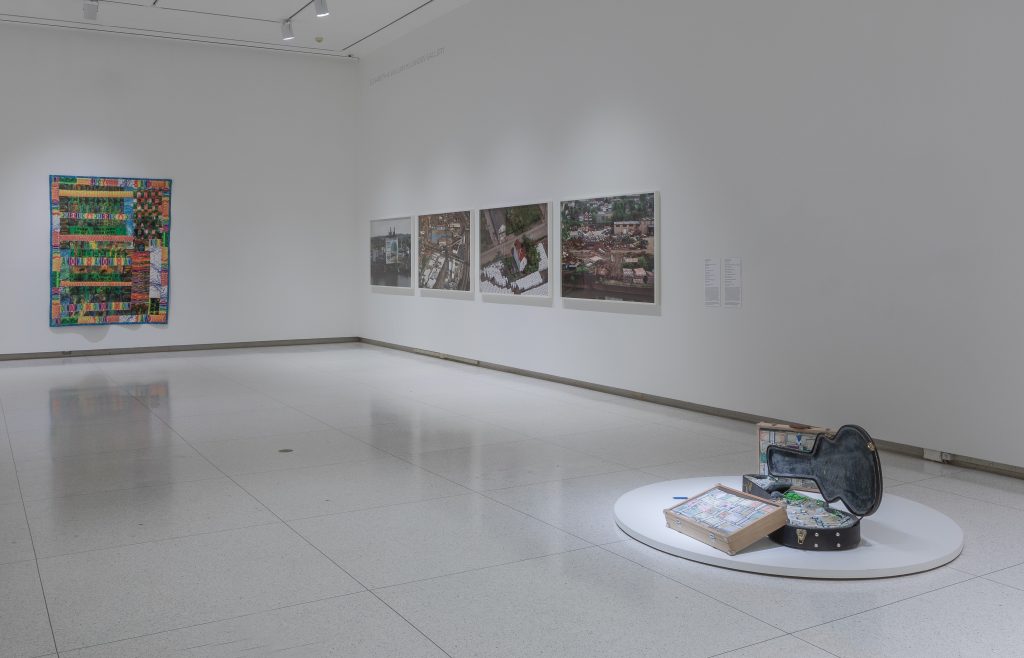 Installation view, “Toward Common Cause: Art, Social Change, and the MacArthur Fellows Program at 40,” Smart Museum of Art, The University of Chicago, 2021/Photo: Michael Tropea

“We had this incredible group of artists that had been awarded the fellowship and we were finding a way to make a selection for a concept,” she says. “The MacArthur Foundation wanted a thematic exhibition, nothing too broad, when proposing the idea for me to curate.” At the time, Winograd was having conversations and questioning what society held in common, what common ground we shared, in terms of resources like air, water, land and culture.

“I was also looking into applying ‘The Undercommons: Fugitive Planning and Black Study’ by MacArthur Fellows Fred Moten and Stefano Harvey when developing our concept,” she says. “With ‘The Undercommons: Fugitive Planning and Black Study,’ we were thinking about academia, roles of institutions, artists and curators in the art world as an institutional structure. We were thinking about the possibility of resistance between institutional structure and the possibility of artwork as a form of restructure. This led to the thought of how art responds to crisis and the theme of the exhibit.”

Winograd refers to the resources as “the commons,” in reference to Moten and Harvey’s book and especially the commonalities that the resources share. Examining “the commons” resulted in the understanding that these resources are exclusionary to a degree simply because they are not entirely free. Individuals pay for the land they live on or own and profit is made from water—from the water we drink to the water we bathe in. Depending on the neighborhood, even clean air is inaccessible. Air, water and land are resources that should be indispensable to every being, which opens an avenue to explore today’s sociopolitical climate. 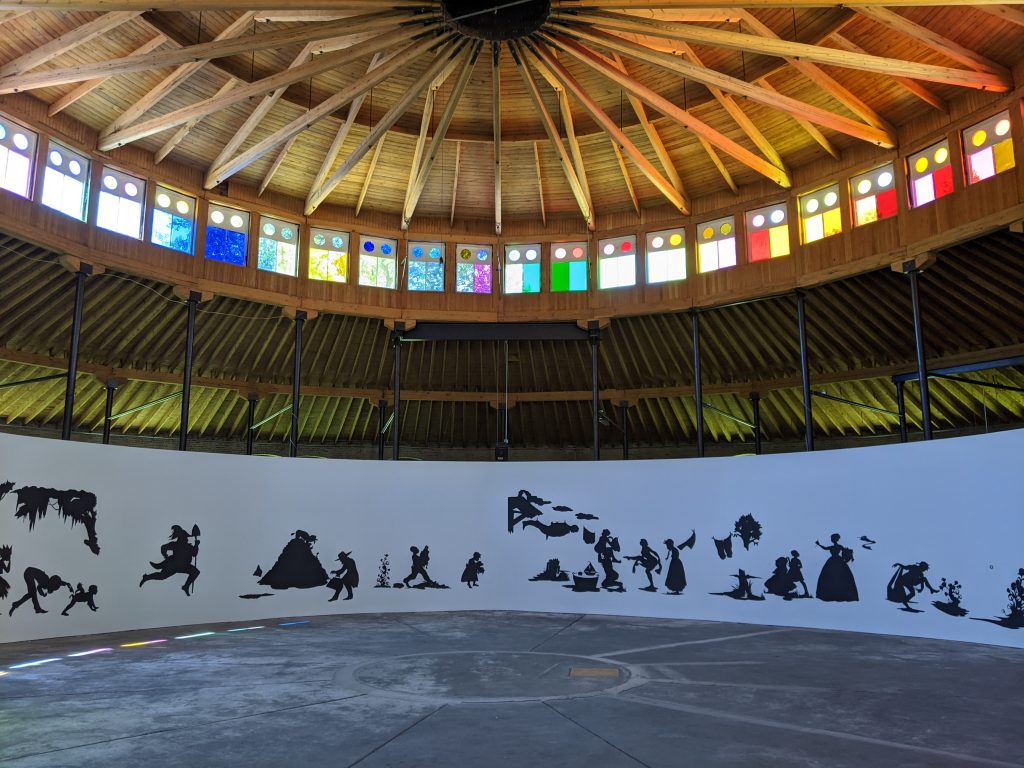 Kara Walker, “Presenting Negro Scenes Drawn Upon My Passage through the South and Reconfigured for the Benefit of Enlightened Audiences Wherever Such May Be Found, By Myself, Missus K.E.B. Walker, Colored,” 1997, Cut paper on wall. Collection of the Museum of Contemporary Art Chicago. Installation view at the Roundhouse at the DuSable Museum of African American History, 2021/Photo: Martin Giese

Human society and communication, the natural environment, the built environment and identity are four areas that are explored in “Toward Common Cause” and raise questions about inclusion, exclusion, ownership and the right of access. Artists also approach issues of collective identity, politics and social change through their different contributions. The exhibition represents the importance and power of using art to channel current political matters that are subsequently brushed over. “Toward Common Cause” is also an important reminder of what Chicago’s art world is best known for: being the leading location in the United States in creating art within the spheres of community, activism and vigilance.

Three long years, including a cataclysmic pandemic later, “Toward Common Cause” opened at the Smart Museum of Art in July, followed by other locations. Further exhibitions and programming will launch this season. 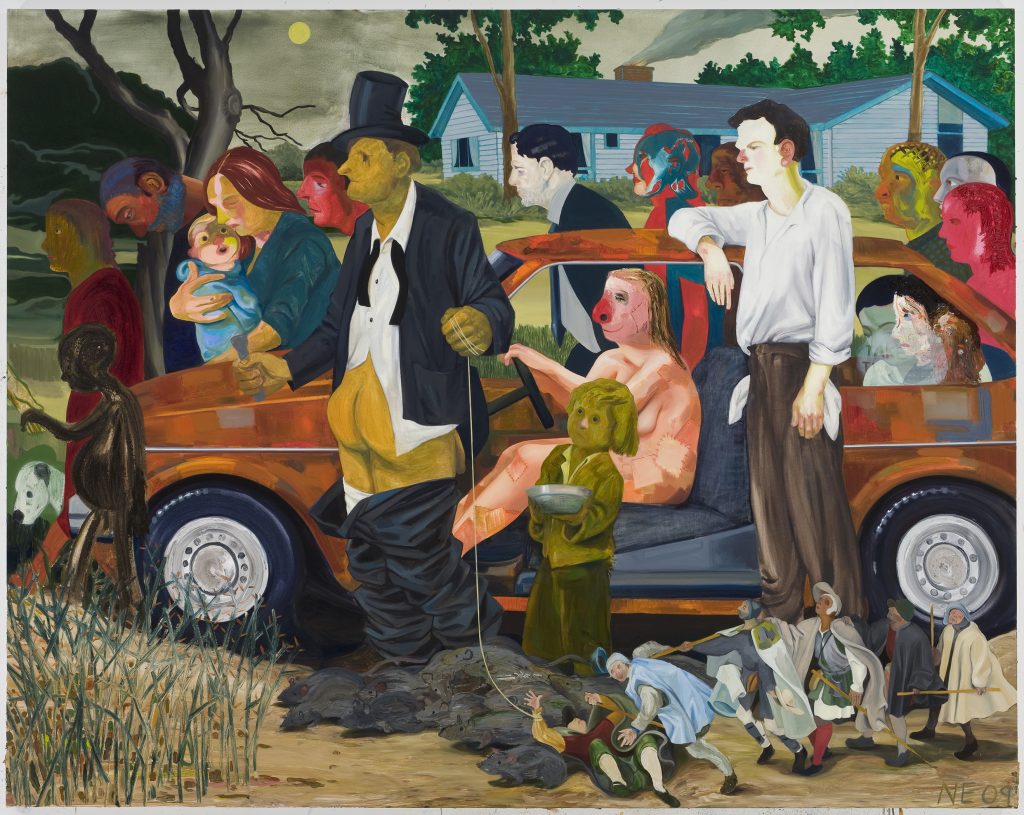 Nicole Eisenman, “The Triumph of Poverty,” 2009, Oil on canvas/Courtesy of the artist and Vielmetter Los Angeles

The group show at The Smart Museum studies how race and class shape rural and urban geographies, and the works range from large-scale paintings to film photography. Entering the gallery, visitors find wall texts explaining art and social change in English and Spanish. The works of distinguishable artists, including Jeffrey Gibson, Nicole Eisenman and Fazal Sheikh are on display. All are driving forces in the worlds of art and activism.

Visitors will spot Nicole Eisenman’s “The Triumph of Poverty” upon entering the gallery. It was painted in the midst of the financial crisis in 2008. Eisenman’s work reinvents a painting of the same name by Hans Holbein from the sixteenth century in which Holbein’s mule is replaced by an inoperative car and people who seem to be in anguish—a contrasting lineup of class, race and gender in accordance to today’s world. An allegorical piece, “The Triumph of Poverty” reflects the current recurrence of class and economic struggle, and asks whether these issues will ever be resolved. 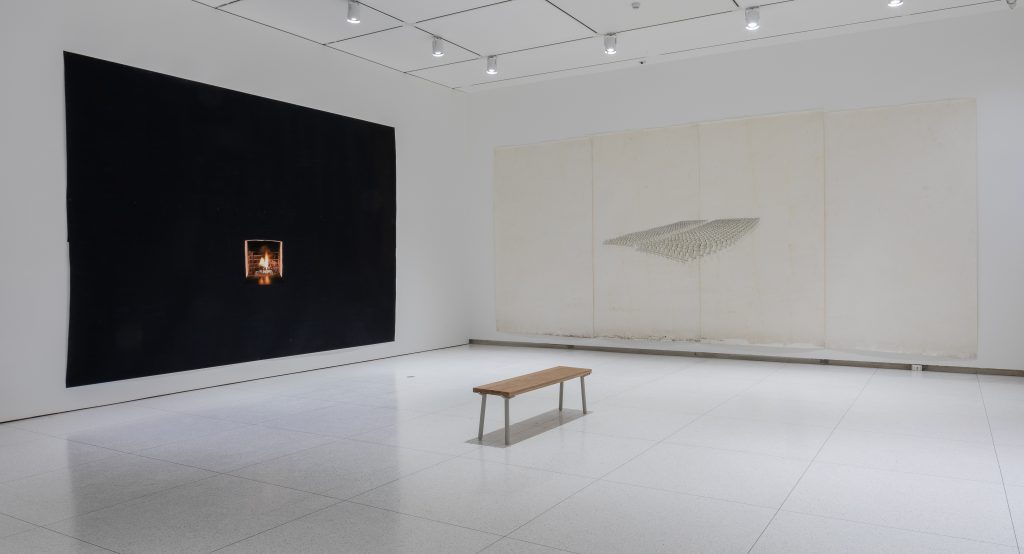 Installation view, “Toward Common Cause: Art, Social Change, and the MacArthur Fellows Program at 40,” Smart Museum of Art, The University of Chicago, 2021/Photo: Michael Tropea

Just steps past Eisenman’s work, “Stand Your Ground” by Jeffrey Gibson, a member of the Chocktaw and Cherokee nations, is hung on the chalk-white walls. Gibson’s piece is made of cotton and linen and displays a repetition of graphics and linguistics that are digitally printed onto the fabric. Gibson takes visitors back to the murder case of Trayvon Martin in 2013 and the Standing Rock Protests in 2016. The patterns and language, which are laid out structurally, reconvene stories of Black and Indigenous communities that have tolerated immeasurable discrimination in the United States. The Standing Rock Protests were a time where grassroots organizations formed and demonstrated protests against the construction of the Dakota Access Pipeline.

The beaming vibrancy of the colors is hard not to notice, which is intentional for Gibson. The use of brighter colors characterize the resistance of Black and Indigenous communities and how the discrimination they have faced will not be undermined, nor overlooked. Gibson has more work at his concurrent exhibition “Sweet Bitter Love” at Newberry Library, a companion exhibition of “Toward Common Cause.”

The works from Fazal Sheikh’s ongoing photo project “Exposure” cover each inch of the walls in a rather secluded area within the gallery. “Exposure” was developed in solidarity with the Citizen’s Rally held in Salt Lake City, Utah on December 2, 2017 after then-President Donald J. Trump signed an executive order calling for the reduction of twenty-seven national monuments so as to open up more land to development. This meant eighty percent of Bears Ears National Monument, the ancestral home of the Hopi Tribe, Navajo Nation, Ute Mountain Ute Tribe, Pueblo of Zuni and Ute Indian Tribe, and half of Grand Staircase-Escalante National Monuments would be shrunk, in the interest of financial gain. Sheikh’s response was to take aerial photography of borders near the monuments. Images of uranium mines, coal and oil wells carrying out environmental pollution can be seen where natural gases and fossil fuels in soil once laid. Visitors can hear methane emission sounds in the gallery space which signifies the alarming rate of stillbirths and impact on child development in the state of Utah owing to high methane levels.

Sheikh’s mission is to restore the voice, agency and face of the displaced people, which is the very essence of the MacArthur Foundation’s mission “to build a more just, verdant, and peaceful world.” Winograd met Sheikh in 2018 as she began her role as curator of “Toward Common Cause.” She worked with High Meadows Environmental Institute, a center dedicated to researching the Earth and preparing future leaders in a world increasingly affected by climate change, to develop Sheikh’s part. 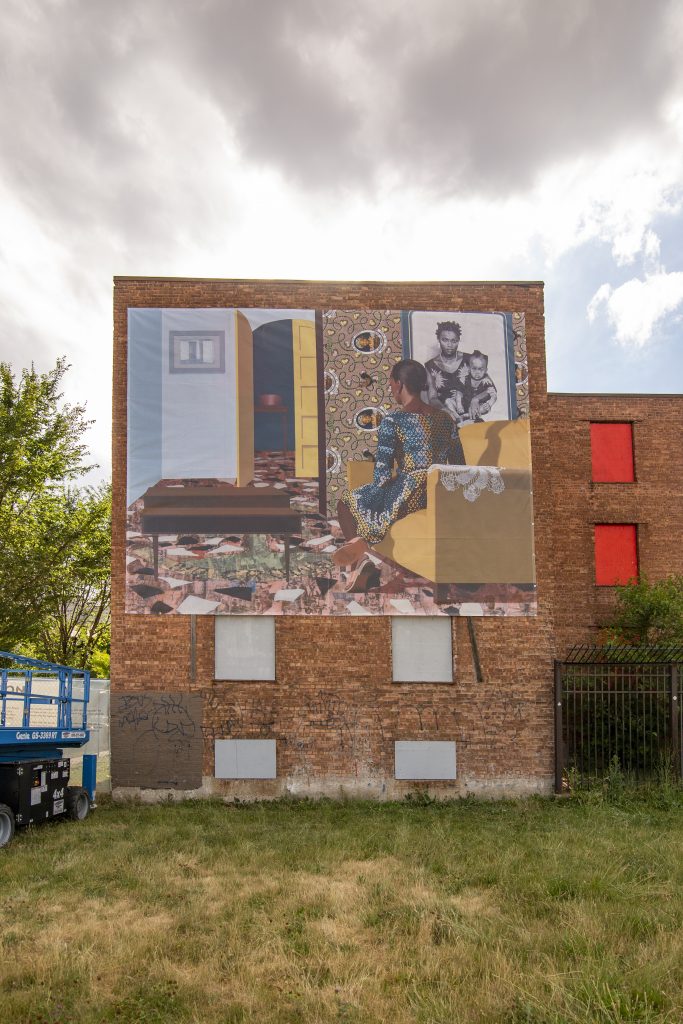 Njideka Akynyili Crosby, “Mother and Child,” 2016, installation view at the National Public Housing Museum as part of “Toward Common Cause: Art, Social Change, and the MacArthur Fellows Program at 40,” 2021/Photo: Jonathan Loïc Rogers

“The best thing about this project has been working with the partners—the artists and organizations,” Winograd says. “This has been a challenging time to do anything especially within the last eighteen months. It has been really gratifying to work with this group of artists and try to address necessary questions. Spending time with these people during an incredibly difficult period, a pandemic and economic crises, has given me hope in what has been a very dark time for everyone.”

“Toward Common Cause” is an unequivocal project uncovering vulnerabilities yet evoking the strength and resilience of marginalized communities. The works of the twenty-nine fellows send several messages and share truth where it may be unfamiliar. As viewers of their work, what must follow next is how we respond and play our roles in rebuilding society. (Hadia Shaikh)

“Toward Common Cause: Art, Social Change, and the MacArthur Fellows Program at 40” will be on display at Smart Museum of Art, The University of Chicago through December 19, 2021. For information on all the sites, visit towardcommoncause.org.