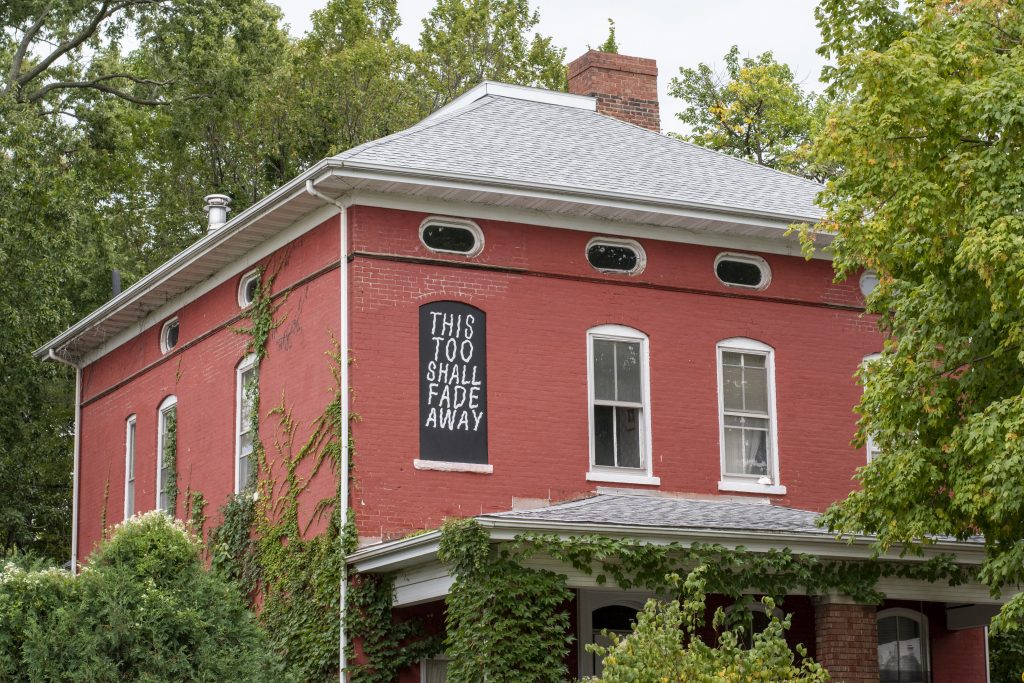 Edo Rosenblith, “…Fade Away,” from the 2019 Terrain Biennial in Enos Park (Springfield, Illinois)

“Keep in touch” is the consummate yearbook inscription. It’s an open invitation to stay connected, and a fitting theme to this year’s Terrain Biennial. Now in its fifth iteration, the public art event opens October 2 and runs through November 15, with outdoor installations on view on porches and front lawns in locales from Oak Park to Springfield and Dallas, Texas to Bangalore, India.

Biennial co-organizer Tom Burtonwood says that when the team discussed this year’s theme, the idea of coming together, and also of touch and tactility, were front-of-mind. “It’s public art, so it’s art that’s in the public, it’s art that for the most part could be touched,” he says. “There was also the idea of just keeping in touch, like people have been isolated. We were sheltering in place, we’re still isolating in many ways. We’re very much trying to think through how to encourage people to re-engage with each other and have correspondence.”

Terrain Exhibitions was founded by the late artist Sabina Ott in 2011. A tireless champion of local artists, Ott initially invited artists to show in the space outside her Oak Park home. (Ott died in 2018.) The project expanded into a biennial in 2013, growing over the years to hundreds of locations around the world. This year, around 600 artists are exhibiting work in over 250 locations.

“It’s getting to be quite a thing,” Burtonwood says. “It’s really exciting, and it’s really heartwarming to have that kind of support, that that many people want to do this thing.” 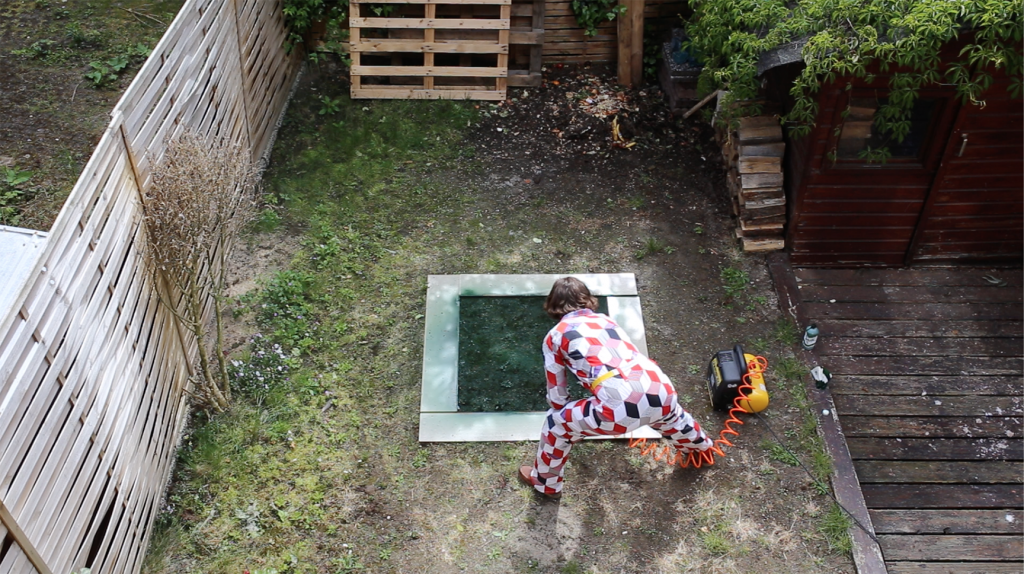 “One Monochromatic Outside Job,” Keeley Haftner

The Chicago launch is at Anthony Overton Elementary School in Bronzeville, as part of the Chicago Architecture Biennial. The block party will feature music by Madeleine Aguilar and the Chicago Sinfonietta, and installations, activations and performances by artists including AJ McClenon, Jade Foreman and Duncan MacKenzie. The school will also be the site of Biennial installations, such as a work on the grass by Netherlands-based artist Keeley Haftner, which will evolve during the run on the exhibition. Alberto Aguilar will stage an intervention with the school’s sign, and YuHsin Wu will use the building’s window blinds for their piece, like a camera obscura.

The Biennial solicits artworks via an open call, and, in keeping with Ott’s vision, tries to keep the process democratic and accessible. Everyone working on the project does so on a voluntary basis; the organizing team all started their relationship with Terrain as participants. 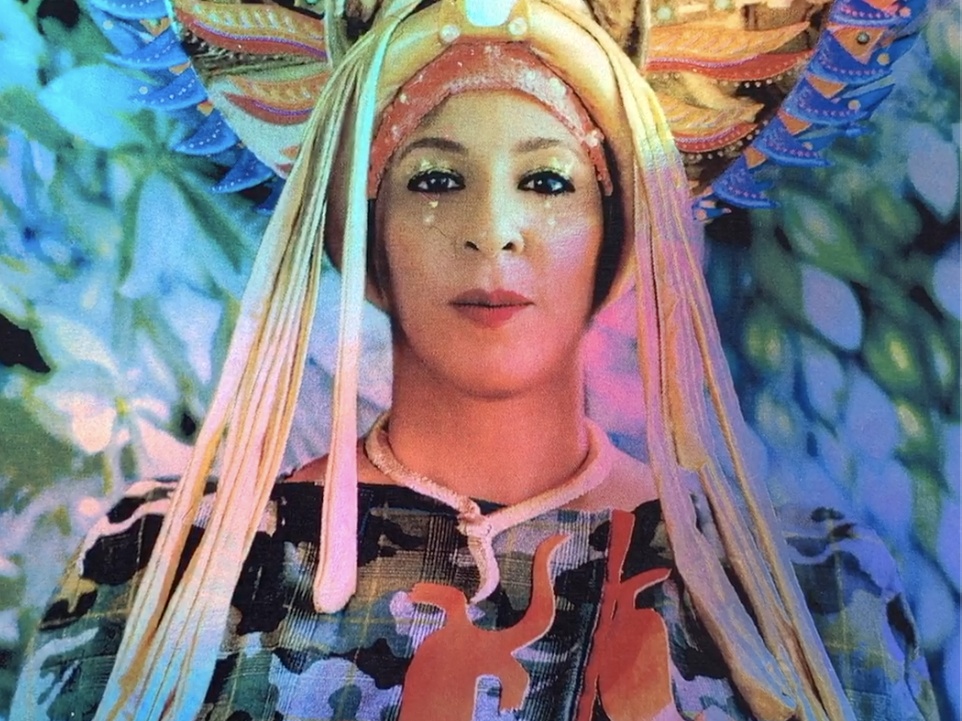 “Sabina gave us this gift of Terrain,” Burtonwood says. “It’s this community-led and -inspired project.”

One way organizers have honored Ott’s legacy this year is by connecting artists with hosts who want to participate, which relates back to 2021’s theme. “The matchmaking process is definitely something that is difficult and it’s something Sabina did very well,” he says. “Sabina just knew. We’re working hard to try and replicate it but we won’t ever quite replace that.” 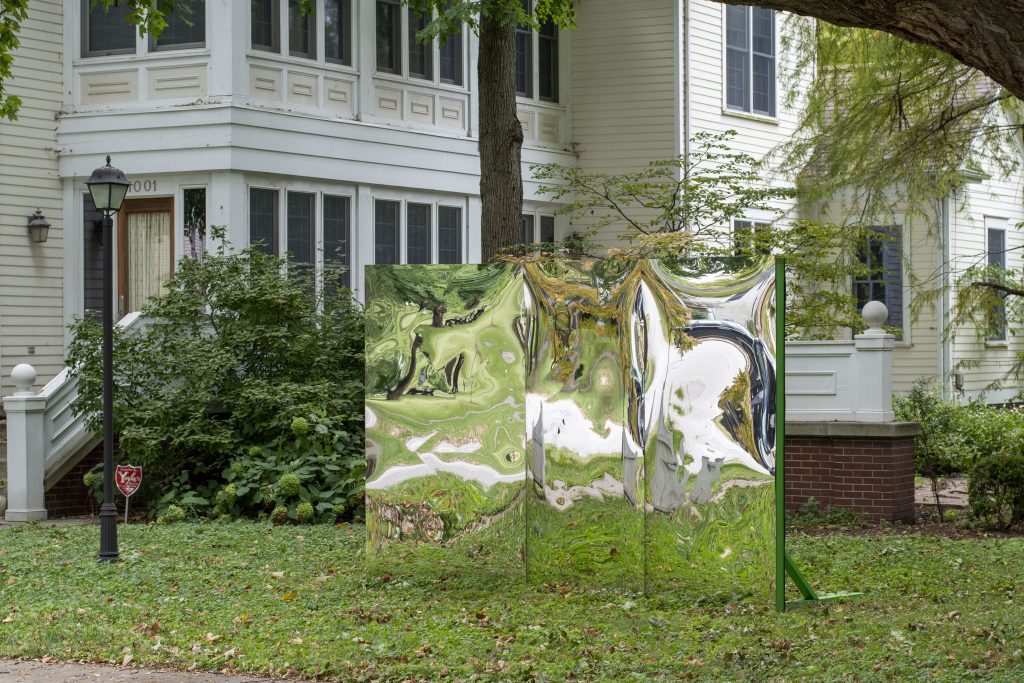 The Terrain website features an interactive map with Biennial locations, which allows users to plot a route.

Although Terrain was founded in Oak Park, it’s infused with the supportive, community-oriented, DIY ethos of Chicago’s art scene. “We’re creating platforms for each other to exhibit,” Burtonwood says. “Sabina saw this sort of space where it’s like, there’s a way to do public art, and to do it outside of the usual systems of public art, and a way to decentralize the art as well. You can keep trying to move away from a center, and you can keep taking it into all the different neighborhoods of the city. We’re not represented everywhere yet, but we’re trying. Maybe the next iteration of the Biennial, we’ll go a little bit deeper into the city.” (Kerry Cardoza)

For more information on the Terrain Biennial, visit terrainexhibitions.org.