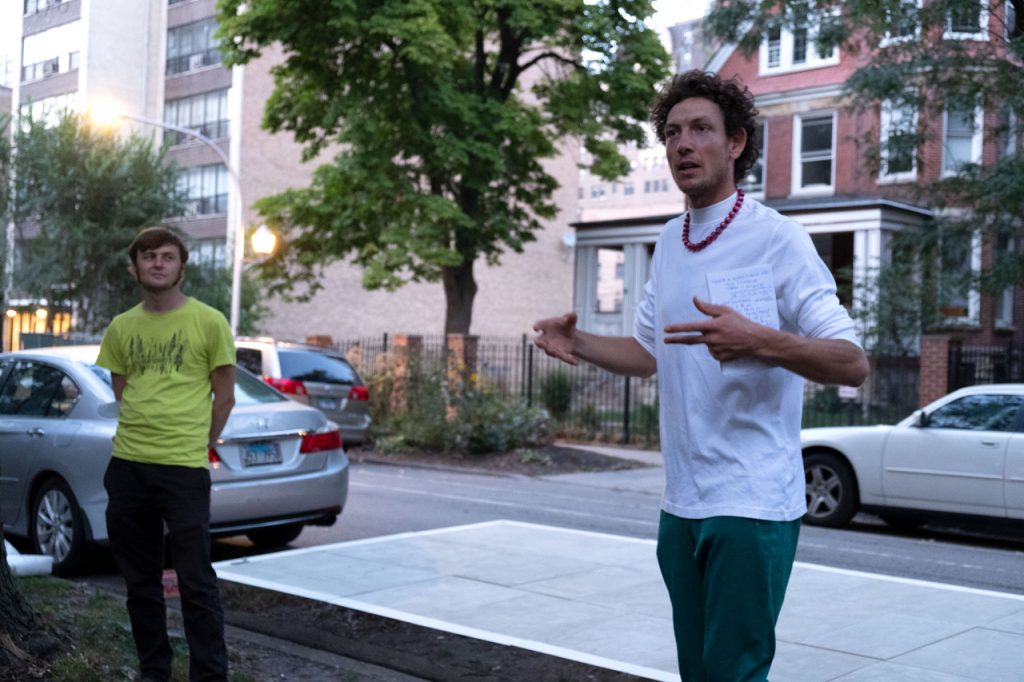 It is 5:30pm on a Friday in Edgewater. A man walks outside to fix his car, luckily parked on his block. He opens the hood, and when he reaches for the motor with his wrench he notices something taking up the parking space in front of his car: it is a platform, coated in what seems to be common street pavement, and covered in mirrors on its sides–essentially, a piece of street, raised up to about the height of the curb. Our man carefully steps on the paved platform and works on his car for the next hour before a few people push it down the block to a spot in front of the house gallery 6018|North.

This camouflaged platform anchors the intervention “Parasite Parking,” created by Berlin-based artists Jakob Wirth and Alexander Sacharow as part of the exhibition RAISIN at 6018|North, a partner of the Chicago Architecture Biennial. The project began Friday, October 1, and will occupy parking spots in different neighborhoods in Chicago, day and night, until Friday, October 8. 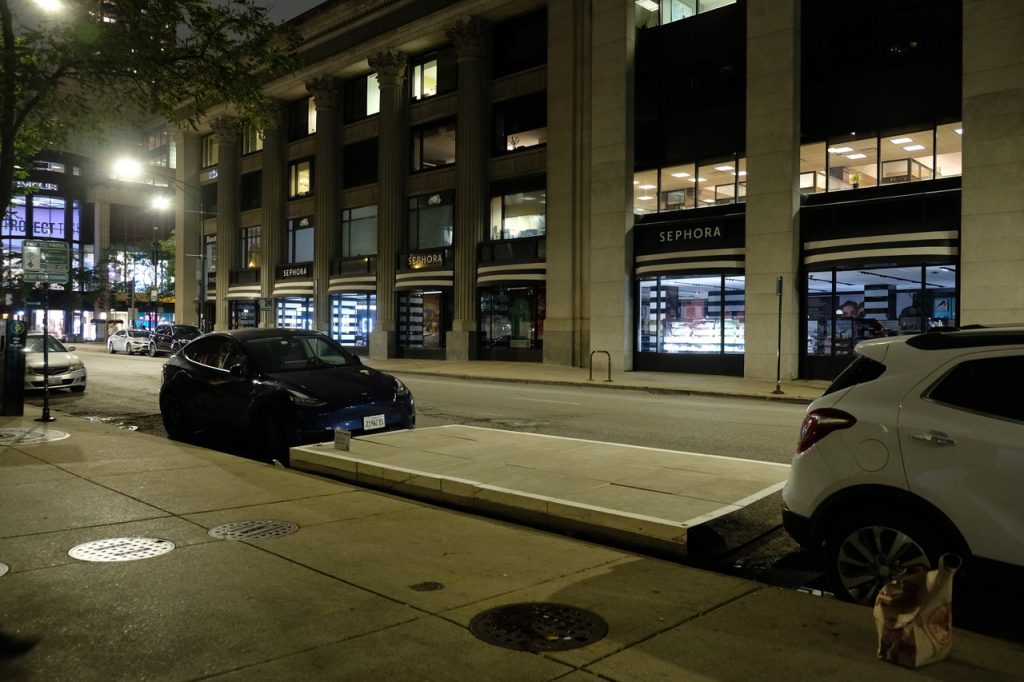 “Parasite Parking” in street disguise on Ohio near Magnificent Mile on Michigan.

“Parasite Parking” is a direct provocation on the mass privatization of parking in Chicago. In 2009, the City of Chicago struck a deal leasing most of Chicago’s street parking spaces to a private company, ParkChicago, for seventy-five years, essentially privatizing the service in the interest of one company that has already profited nearly fifty percent over the $1.16 billion investment. But for Wirth and Sacharow, this is not just a loss in revenue for the city, but a loss for all citizens, of imaginative potential and of effective ability to define and change our streets. The company has become a disproportionate stakeholder and a potential gatekeeper in discussions of changes to the streets, from parades and protests to bike lanes, pedestrian-only zones and other imaginations for a fairer city. For Wirth, the privatization of parking is no less than the privatization of the commons. This well-known case stands for several other appropriations of the common good, such as the usurpation of state funds for public housing for profit-seeking urban development. For the duo, a “parasite practice” can both mimic this logic of appropriation and revert it back toward the common good. Since their start on the project “Penthaus à la Parasit,” the artists have borrowed the notion of the parasite proposed by French philosopher Michel Serres: the parasite is not only a threat but also a source of disquiet and innovation within systems ruled toward the protection of private property and profit.

The project’s relationship with the original biological concept of the parasite is less clear. The half-ironic, half-earnest logic of pop-up “parasitism” in the context of space privatization is at once promising and potentially problematic: the interaction with the public, with housing activists and law enforcement authorities might show strengths and issues in those seams. 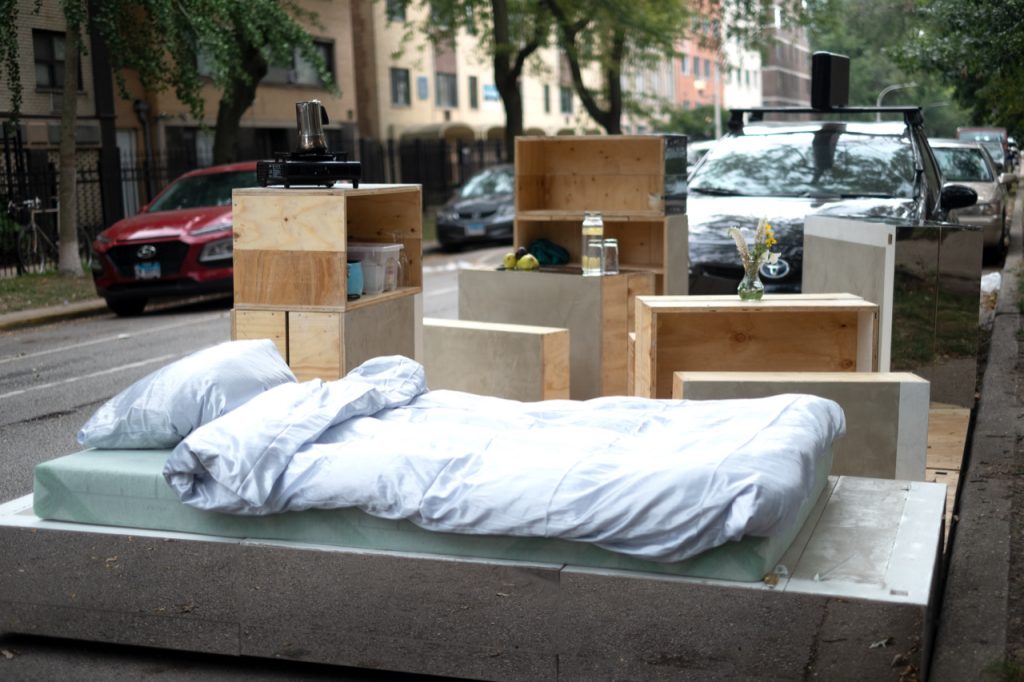 “Parasite Parking” set up as a bedroom on a parking space in front of 6018|North (6018 North Kenmore)/Photo: Jakob Wirth.

“Parasite Parking,” not unlike Michael Rakowitz’s earlier “(p)Lot” (2004-ongoing), provokes by creating direct social uses for occupied parking spots. After their Friday introduction, the artists propped up the modular elements that make up the top of the platform to create small tables, benches and even a bar counter. The evening ended with soup prepared on a portable stove on the platform and a celebratory prosecco, transforming the parasitic platform into a pop-up bistro between parked cars. The same elements can make up a bed and desk, where Wirth will work, hang out and sleep every day of the intervention, besides hosting events with activists and artists. (Marina Resende Santos)

“Parasite Parking” continues through October 8, with a capstone event near Halsted and 18th Street, in collaboration with Open Sheds Used For What?, Tender House Project and El Paseo Community Garden. All events are open to the public. More info can be found at parasite-parking.net.