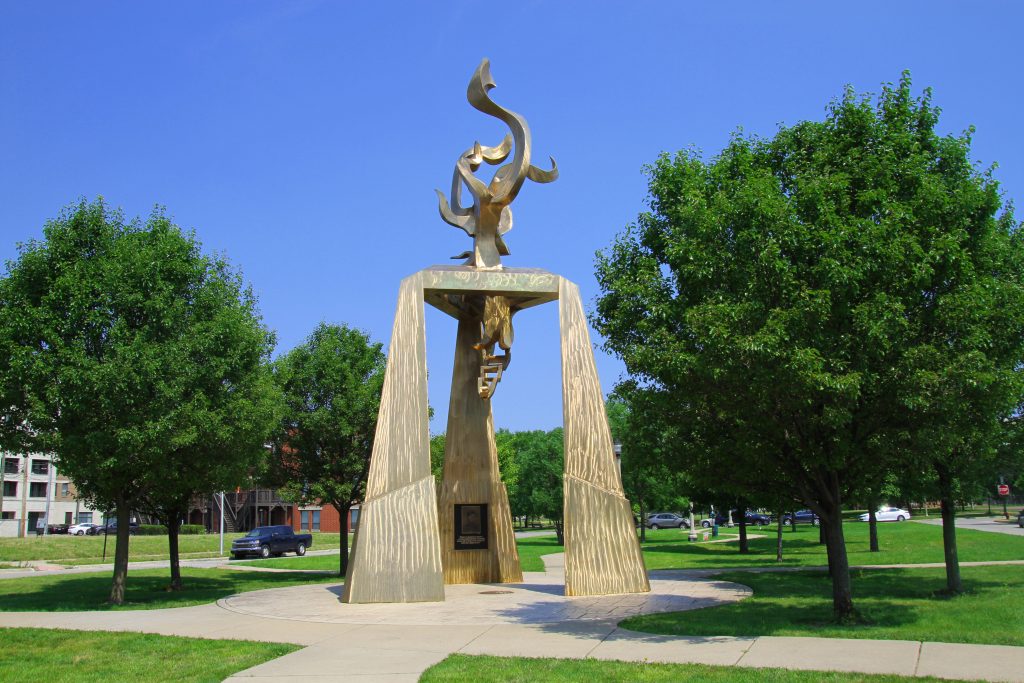 After thirteen years of planning, fundraising and crafting, the “Light of Truth” monument to Ida B. Wells-Barnett was unveiled this summer. Wells-Barnett’s great-granddaughter Michelle Duster spearheaded the effort, as part of a family tradition of keeping Ida’s legacy alive. In this role, Duster has also written, edited and contributed to a dozen books on Wells-Barnett.

The “Light of Truth,” constructed by one of Chicago’s most revered sculptors, Richard Hunt, stands thirty-five feet high and weighs 14,000 pounds. An abstract figure of shining, light bronze standing on three columns, the “Light of Truth” is a twisting, open, torch-like configuration over levitating stair steps. Standing under it gives a sense of its stature: the average person comes up to about a third of the height of the base. Installed in the Bronzeville neighborhood, the monument sits where Wells-Barnett made her impact on Chicago in the late 1800s and early twentieth century.

All of these details were carefully planned out by Duster and the Ida B. Wells Commemorative Art Committee that she worked with to memorialize Wells-Barnett. Duster says that, for her and her family, “It’s almost like a second job to carry on this legacy and to promote her work and make sure that what she did and contributed to this country is not just forgotten.”


While many know Wells-Barnett for her activism in anti-lynching advocacy and the suffragette movement, Duster wants Chicagoans to recognize the direct impact she had on this city. 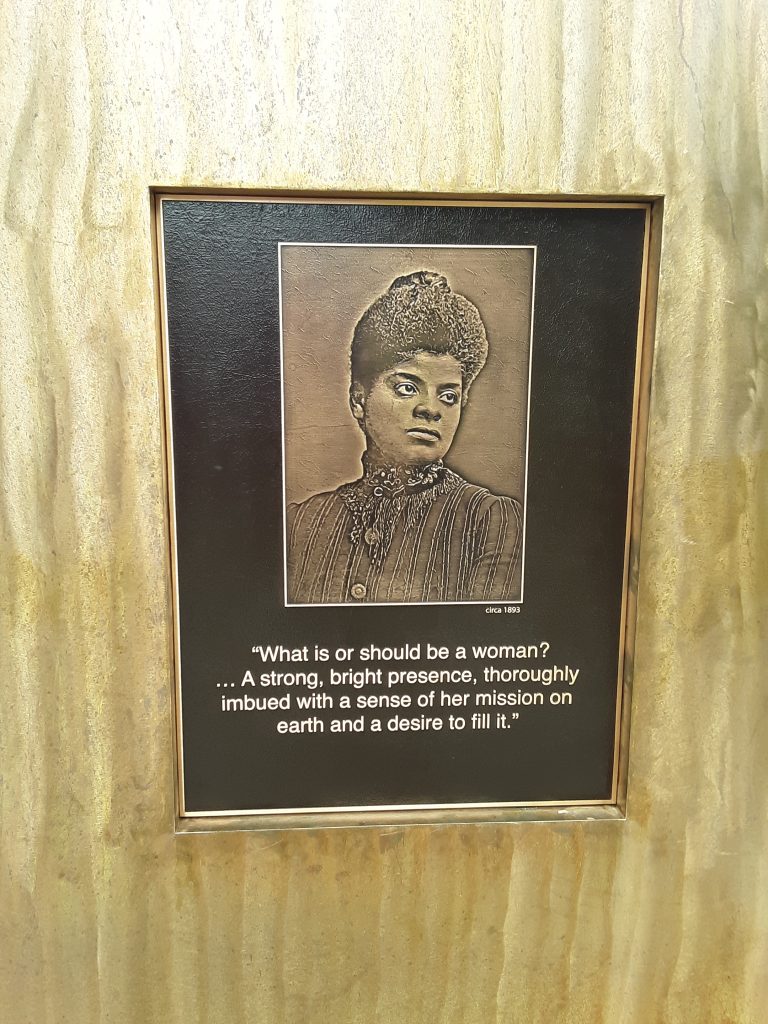 Wells-Barnett often took on campaigns on behalf of individuals who had been targeted by white supremacy, and would advocate for Black men in Chicago who had just arrived in the city through the Negro Fellowship League. The League could house dozens of men for pennies a night, as they assimilated in Chicago and searched for work.

Duster is inspired daily by how Wells-Barnett, who died in 1931, fought to have her voice heard in her lifetime. “My experience, my voice, my perspective, is something I’ve had to fight for, in order to be included,” Duster says. “I’ve drawn that from her. She did everything that she could to make sure that she was heard.”

The monument’s specific location on South Langley is especially vital to recognizing Wells-Barnett’s legacy. The sculpture sits on the plot of land where the Ida B. Wells Homes, a Chicago Housing Authority project, used to be. The buildings were constructed in 1939 and housed low-income Chicagoans for sixty years. When first built, 19,000 people applied for under 2,000 units, and the Wells Homes were an enviable place to live for those seeking upward mobility.

In the eighties and nineties, the homes were plagued by problems not unlike many other CHA projects: neglect by the city and inadequate funding. The United States Department of Housing and Urban Development took control of the housing project in 1995 and then demolished the buildings between 2002 and 2011, despite people still occupying them. The goal was to replace many housing projects with mixed-income housing communities; the land where the Wells Homes stood is now the Oakwood Shore Apartments.

“That was a huge part of the history of Bronzeville and now there’s nothing, there’s just grass,” Duster says she thought at the time.

Duster wrote to Mayor Daley in 2008 and shared her thoughts about the lack of commemorative efforts for Wells-Barnett.

“I asked him what the city was going to do to remember Ida as a woman, because she herself was not a building, she was a woman that the buildings were named after. And so I felt like she is a woman who still needed to be recognized and celebrated in the city,” she says.

For the next two years, the committee brainstormed what would make the cut for Wells-Barnett’s legacy. Once they settled on a monument, Richard Hunt was an obvious choice. Duster was relieved when Hunt agreed. “We got our first-draft pick,” she says, laughing.

Hunt was an obvious choice not only for his artistic talents, but also because of his experience as a Black artist in Chicago. Duster says she wanted to work with someone to whom she didn’t have to explain Wells-Barnett’s impact, or the vibrant history of the Bronzeville neighborhood.

Hunt was born in 1935, only four years after Wells-Barnett died, and graduated from Englewood High School in 1953. He began his work as a teenager, out of his bedroom, and was the youngest artist featured at the Seattle World’s Fair in 1962. Early in his career, he began working with found metals and materials. Hunt often works in bronze, sometimes a darker and muted shade, sometimes shining and bright, like the “Light of Truth” monument, and his sculptures are always abstract, reaching and twisting figures. 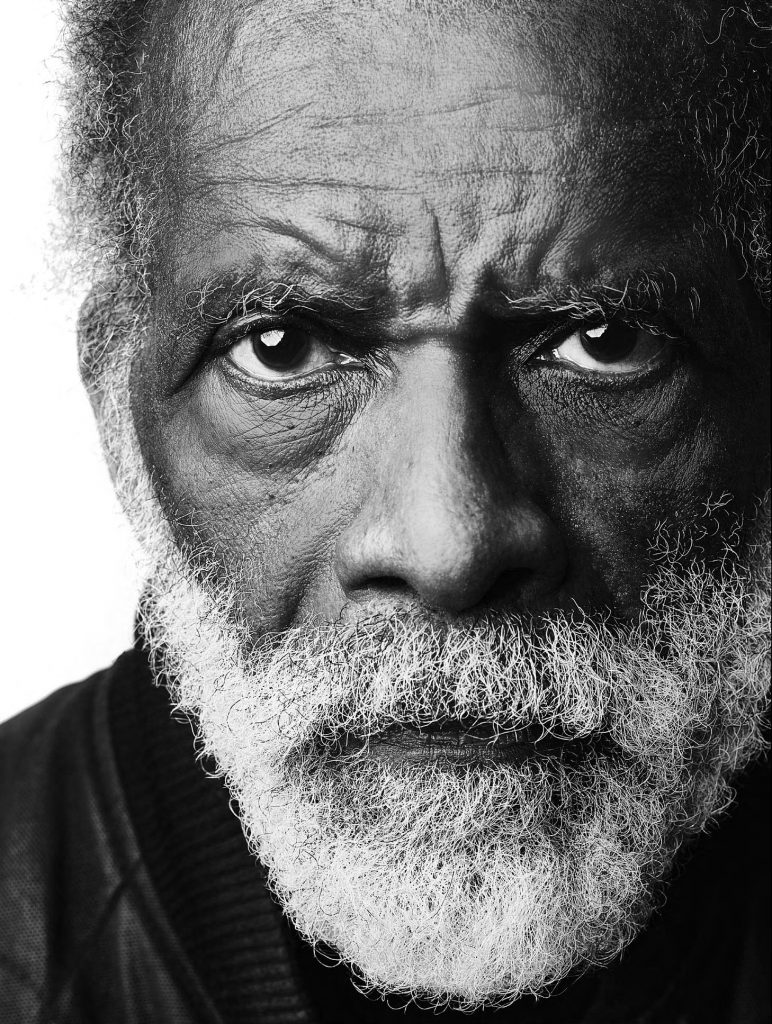 His prodigiousness did not fade, and he is still considered one of the most influential sculptors in the country. His work was just on view in an exhibition titled “Richard Hunt: Scholar’s Rock or Stone of Hope or Love of Bronze,” at the Art Institute of Chicago, which he graduated from in 1957.

“It helps for somebody to have lived it themselves, versus reading about it in a book,” Duster says of Hunt’s lifetime in Chicago. “I know everybody else on the committee felt that artists bring themselves into their work.”

From 2011 to 2018, fundraising was the focus of the committee. They raised about $100,000 in seven years, when Duster turned to social media. The New York Times had just released the first in their “Overlooked” series—obituaries of important people who were “overlooked” by the Times in earlier years. Wells-Barnett was their first feature in the series.

Duster saw this as an opportunity to attract the attention of those who were invested in her great-grandmother’s life to crowdfund the monument. Despite having just a handful of Twitter followers, Duster quickly learned how to use the platform, tagging those with bigger platforms into the cause. New York Times reporter Nikole Hannah-Jones was one of the people who helped broadcast the fundraiser, and Hannah-Jones went on to win a Pulitzer in 2020, the same year that Ida B. Wells was posthumously awarded for her own journalism. 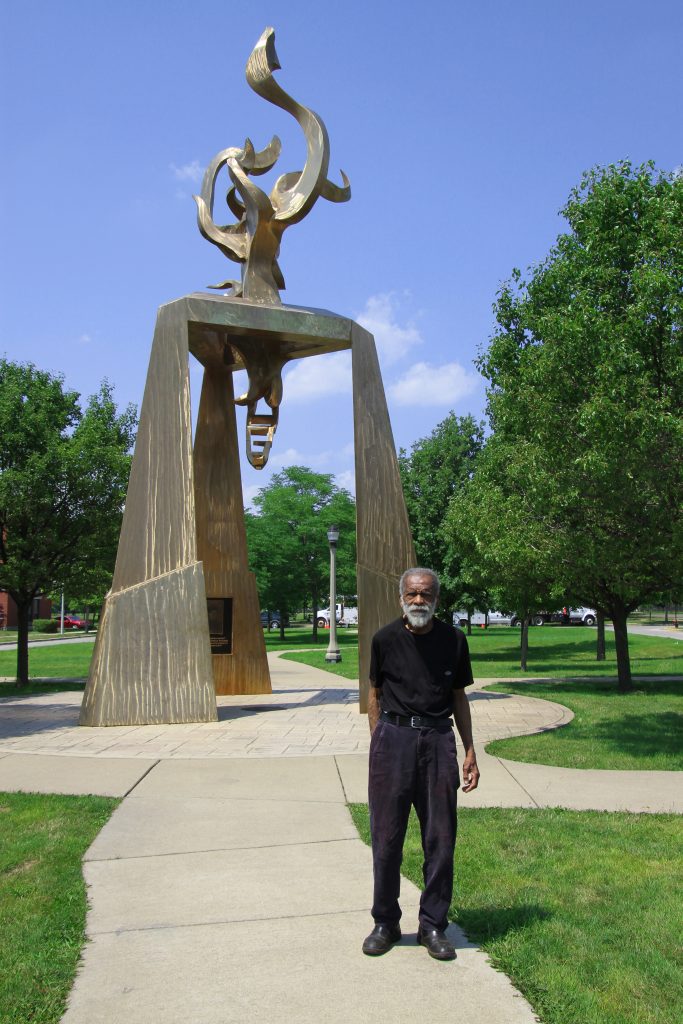 Richard Hunt and his The “Light of Truth” Ida B. Wells National Monument/Photo: Jyoti Srivastava

“After a while, I started feeling like this is really the way it should be done for her, for Ida, because when I thought back to how she raised the money for her publications, it was through crowdfunding,” says Duster. “This monument should be a monument that the people made happen.”

To all of the donors from Twitter and beyond, Duster is not only grateful for their support, but wants them to recognize themselves in this project. “I wanted people to feel like they’re part of this, even if you gave $5, you made this happen, you know, and that’s what happened because I could track all of the donations. And that’s what people were doing. People were giving $5, and $2.75 and $10.”

Like the fundraising efforts, Duster wanted the memorial itself to be a reflection of those who were affected by Wells-Barnett’s legacy, a century on. This is why the committee chose a less figurative style for the monument, Duster says, so that visitors can take away their own image of the memorial. based on where they stand and what they bring to it.

“We didn’t want to tell people what to see, we wanted to create something that people can see in different ways.”

She clarifies that it’s important for people to recognize that “Light of Truth” is a monument, not a statue or bust, and is therefore meant to be abstract and not in Wells-Barnett’s direct likeness. A direct likeness, like a statue, wouldn’t capture Wells-Barnett. “She was a complex person,” Duster says.

2020 was a big year for thinking about monuments, both nationwide and in Chicago. We’ve been looking more closely at what they mean and who they are for. This did not slip Duster’s mind as she approached “Light of Truth.” 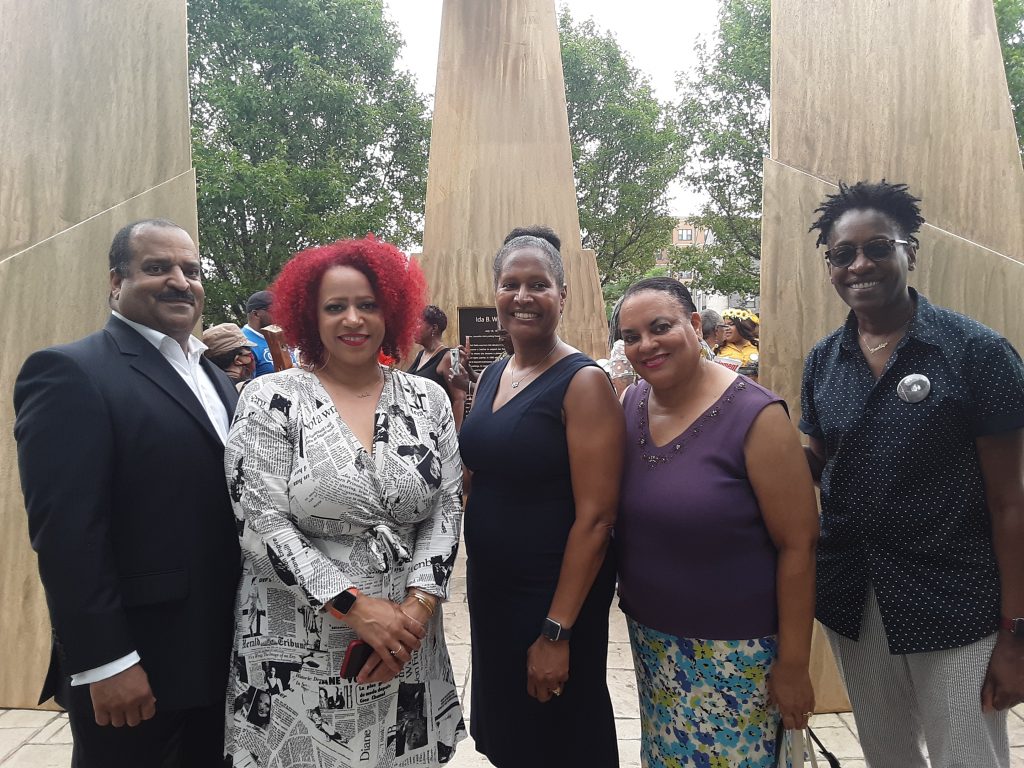 The monument stands out in these conversations, as a direct counterbalance to the Columbuses and confederates that are under scrutiny. These are generally direct likenesses, for one, and intended to highlight an individual life, and therefore all of the movements and prejudices that it stood for. Many confederate statues were also made in a hurry, and cheaply. The toil, quality and price tag of the “Light of Truth” tells a very different story.

And, most importantly, many American monuments are of white men, who often fought to keep anyone who wasn’t a white man out of seats of power.

“I don’t think it’s by accident, it’s been very deliberate,” Duster says, “who is represented in all of these different spaces.”

Less than ten percent of the some 5,000 monuments in the United States are of women, and many fewer of Black women. The “Light of Truth” will join more recent installments that celebrate women in Chicago, such as Jane Addams, Georgiana Simpson and Gwendolyn Brooks.

Duster hopes that “Light of Truth” will become a Chicago landmark in its own right, like the Bean. Already, Duster has heard of couples taking wedding photos under the thirty-five-foot-tall monument and teens using the monument as a backdrop for snapshots.

Duster herself has been back to see it four times since its installment, and takes something different away each visit.

The Light of Truth monument is near the corner of South Langley and East 37th.