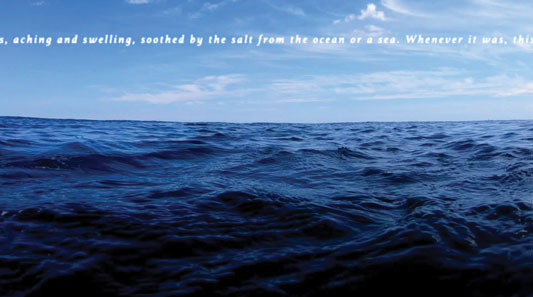 I first encountered the videos of Sky Hopinka (Ho-Chunk Nation/Pechanga Band of Luiseño Indians) in 2017 when I installed curator Risa Puleo’s monumental exhibition “Monarchs: Brown and Native Contemporary Artists in the Path of the Butterfly” at Bemis Center for Contemporary Arts. Puleo included three videos by Hopinka that center Indigenous cultures in personal and documentary footage, text and spoken word. I have been contemplating the ways he is able to abstractly retell narratives about Indigeneity and colonialism through a combination of nonlinear storytelling and new and archival media ever since. Building on this previous work and new research, “Cloudless Blue Egress of Summer” (2019) is a two-channel, thirteen-minute video, relating the duality of colonial violence and Native resistance at Fort Marion in St. Augustine, Florida. As with other work by Hopinka, there is a lot of content to view and comprehend simultaneously. “Cloudless Blue Egress of Summer” is on view at The Block Museum as part of the yearlong initiative, “Thinking about History with The Block’s Collection.”

In a dedicated screening space, “Cloudless Blue Egress of Summer” opens with two views of water. On the left, the camera is submerged, on the right the camera floats with the waves. Low-frequency sounds fill the room. As the left screen sits below the surface, the right spins toward the land and a beach comes into view. A stringed instrument overlaps the deep-water tones. Then, both screens flash a white geometric floor plan over a black background. The text on the floor plan references its proximity to the Matanzas River in St. Augustine. Upon reading the exhibition text, viewers can reason that this is Castillo de San Marcos, the oldest fort in the continental United States. 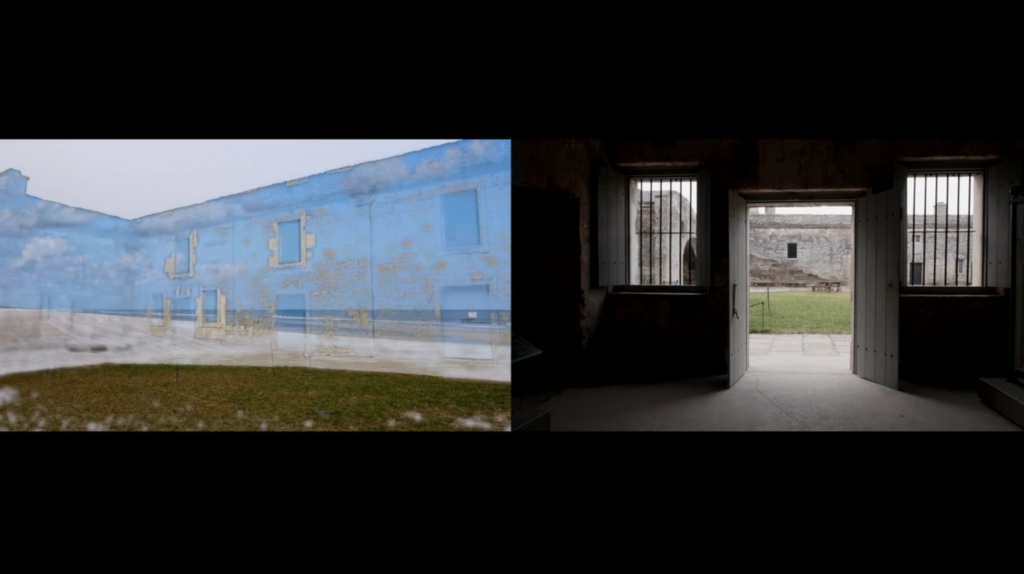 The exhibition text is a foundational and necessary element for Hopinka’s absorbing video. It reads, “Finished in 1695, the structure was known as Fort Marion when it held Native Americans captive throughout the Seminole Wars of the 19th century. In the 1870s, Cheyenne, Kiowa, Comanche, Arapaho and Caddo Indian prisoners were transported to the fort, where prison supervisor Richard Henry Pratt developed educational techniques designed to ‘Americanize’ his captives. The U.S. boarding school system that grew out of these experiments imposed a regime of compulsory assimilation on generations of Indigenous children, a practice of cultural genocide that intentionally divided families and deprived communities of their linguistic and cultural heritage.” Hopinka’s website adds, “Captain Richard Henry Pratt developed this plan […] with the philosophy ‘that all the Indian there is in the race should be dead. Kill the Indian in him, and save the man.’”

The video then switches back to split-screen. The left shows serif text slide in from the right side, over the blue sky and murky river water. This prose is excerpted from the books “Fort Marion Prisoners and the Trauma of Native Education” by Diane Glancy and “Little Black Star” by Winifred Smith. On the right, Hopinka’s tattooed arm shows ledger drawings on brown paper, protected in archival plastic sleeves for the camera. A typewritten note is attached to the last drawing, “Sketches made by members of the Apalachian [sic] Indians confined in Fort Marion as prisoners of war from April 1886 to April 1887. These sketches were made after the Indians had visited a circus in St. Augustine.” Pratt provided ledger paper and art supplies for the prisoners as a way of “rehabilitating” them. Hopinka sourced this collection of drawings from the St. Augustine Historical Society Research Library while at the Crisp-Ellert Art Museum Residency at Flagler College in St. Augustine.

The left video cuts to a contemporary view of a charter bus and a group of tourists at Fort Marion. Serif text emerges from the bottom of the screen, laid out with a keen graphic sensibility, recounting Seminole Chieftain Coacoochee’s escape from Fort Marion in 1837. According to his testimony, he and his fellow escapees went on a hunger strike for nine days to lose enough weight to slip through a window. Behind the text, the former prison’s now-museum-quality interior, with vitrines and didactic material, comes into focus. The right continues with additional ledger drawings. Additional text is overlaid on the drawings from the books above, “The prisoners stood on the wall of the fort and stared at the water. The waves kept coming like the cavalry.” The stringed instrument plays along with the whooshing of the waves. The audio builds when a deep echoey voice dictates Coacoochee’s account from the text and a falsetto voice joins, adding layers to the video. It is a cacophony of content. After the narrator and singer are finished, the stringed instrument returns.

The final sequence merges virtual and digital reality with the past, and present remnants of Fort Marion. The left employs a green-screen effect filling the window with a sky and beach scene and the right pans through the fort/museum interior spaces. The narrator returns with additional accounts from Coacoochee. Then another switch on the left where Fort Marion is digitally overlaid on the beachscape as the narrator’s voice distorts back into the deep water echoing at the beginning. The dual screens revert back to the under and over water views from earlier. The synchronous video loops back to the beginning. Departing the film is at the viewer’s discretion, but the content remains streaming. I recommend staying for a second viewing and rereading the exhibition text to fully grasp Hopinka’s intent with “Cloudless Blue Egress of Summer.”

Merging metaphor and direct accounts of Fort Marion, Hopinka’s “Cloudless Blue Egress of Summer” offers perspectives on the long and complex reality of American colonialism told through this site of annihilation. While it is nearly impossible to comprehend everything in one sitting, the video’s overlapping content is an example of the presence of these and other untold stories running parallel to popularized accounts of American history. The exhibition text reminds the audience that this “friction” is intentional. Without the text as a guide, Hopinka’s conceptual video remains a visual and auditory fantasia, but together, “Cloudless Blue Egress of Summer” is a call to action for relearning about Native resistance to the settler colonialism. (Alex Priest)

“Cloudless Blue Egress of Summer” is on view through December 5 at The Block Museum at Northwestern University, 40 Arts Circle Drive. Hopinka will be in conversation with Pick-Laudati Curator of Media Arts Michael Metzger on November 10 from 6-8pm at The Block Museum.