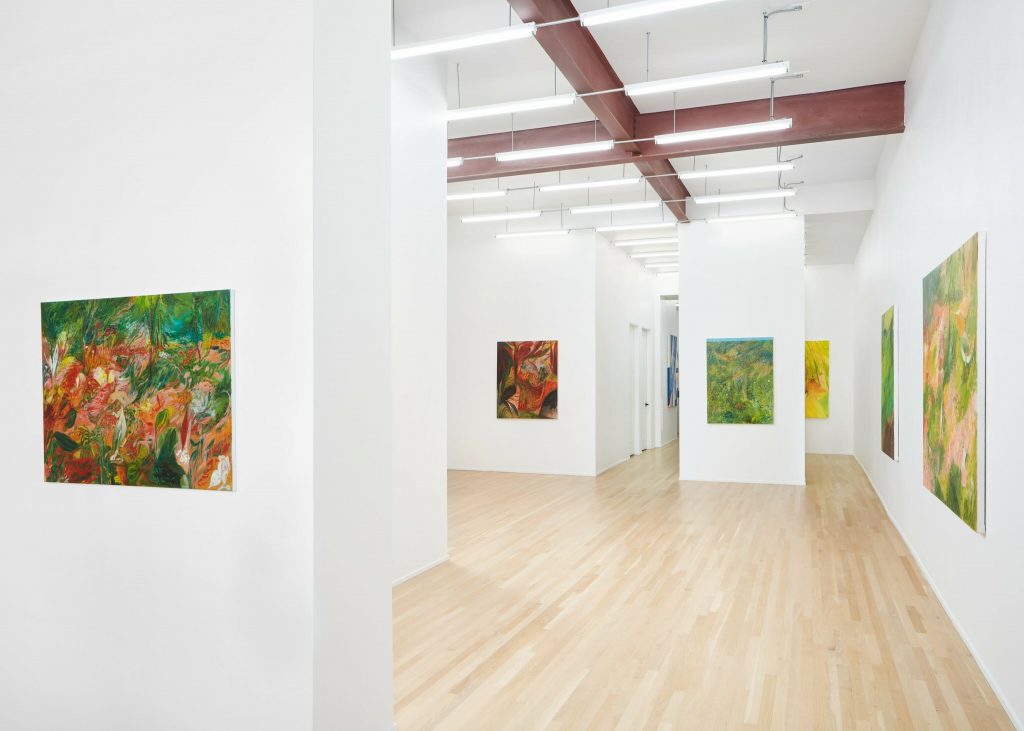 The early weeks of October mark the Indian festival of Navratri, a nine-day celebration of the goddess Durga, or “Kali Ma,” in all her manifestations. Durga personifies a form of power associated with the feminine divine known as shakti, which transcends a Western, polarized understanding of negative-positive, masculine-feminine energy. It is at this time that Chicago is privy to not one, but two sold-out shows by two brilliant women painters, with varying degrees of familiarity to the subcontinent.

Soumya Netrabile’s “Open Your Mouth and Taste the Spores” at Andrew Rafacz is a complex telling of the artist’s relationship to color, energies and emotions. The exhibition is varied and complex, as for Netrabile each canvas calls for its own process. Netrabile’s time spent in SAIC’s painting and drawing department in her undergraduate years provided her with a deeper way of understanding art history and its symbolism, color chemistry and material. Resisting stylistic categorization, she says, “I’m not attached to one school over another. I love Rembrandt, Velazquez, Picasso. I love Robert Ryman. As artists, we must remain open. I think of the wind and the energy I experience while walking in nature and try to stay present with it as I return to my studio.” Viewing the exhibition, it becomes clear that Netrabile’s preoccupation with compositional structures and the movement of the gaze sits comfortably side by side with her careful study of color chemistry and the natural phenomenon of light.

Approaching “The Forgetting of Themselves and Each Other” and “The Rising,” Netrabile’s interpretation of nature and her energies are transmuted through a vivid palette of oil paints of varying consistency. Her strokes churn and build on one another, evoking the feeling of being seized by a windswept landscape. Miniature figures of animal or human presence draw one’s attention to compositional thirds, at times bringing in unconventional planar arrangements in parts of the painting, masterfully blending the distinction between figure and ground. Drawing on the idea that nature is inextricably linked to life, Netrabile’s worlds do not divide the realms of natural, human and animal energy. Nature is embodied in trees, the movement of prairie grasses, the thickness of shrubbery and woodlands. Figures appear as energetic strokes and careful detail through the artist’s hand, lying in communion within frondescence.

The values and tonal variations of green in “Truffle Hunters” and “The Boot” shed more light on the artist’s use of oil as medium and her tools. Employing brushes, rags, fingertips, wooden sticks, rubber spatulas and naturally derived tools, Netrabile applies paint on canvas with a range of strokes that guide the eye through the depths of the scene. She speaks of her process being akin to the perspectival illusion she experiences while walking in prairie grasslands just before a storm or trekking in the woods at sunset, when the eye can no longer distinguish between what is in the foreground and background. What may at first appear as a flat grassland grows more nuanced as one spends time in viewing Netrabile’s strokes, wielding values and depth of color that build an emotional range that grows and expands while simultaneously engulfing her figures. In “Truffle Hunters,” the figure of the dog clandestinely appeared in the foreground leading her to create the scene, rather than intentionally setting out to do so. Listening to the whispers that lie between the pigment and the surface of the canvas, Netrabile works on each painting till it feels resolved, not necessarily finished or complete. 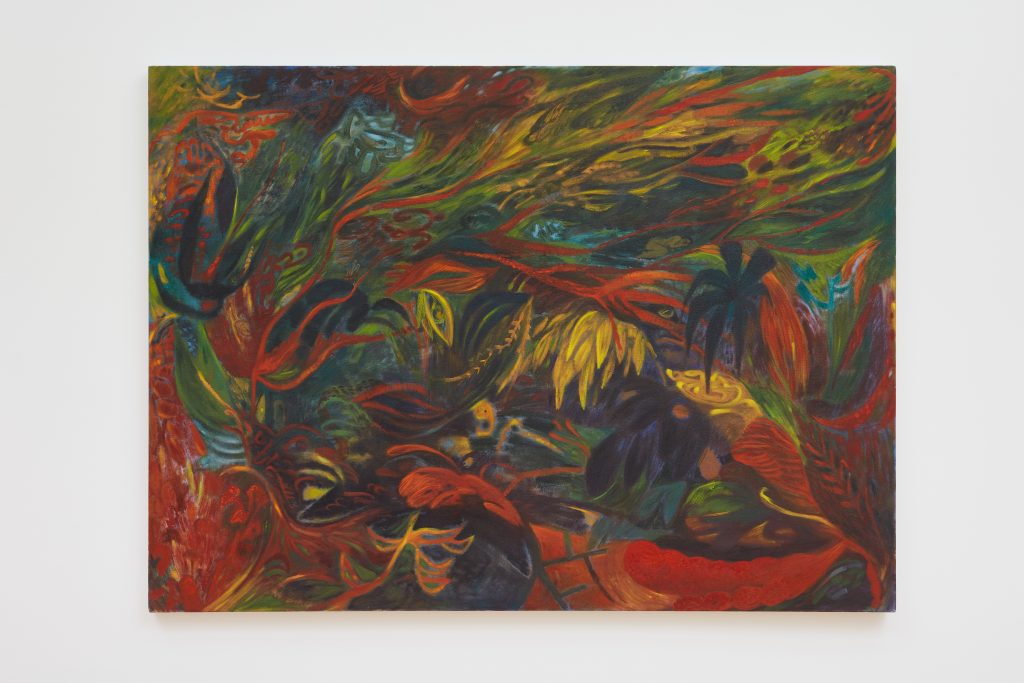 As an Indian born and brought up in the subcontinent, I am curious about the range of Netrabile’s color palette, seeking perhaps an emotional language I can clasp. In “The Sublimation,” its sister painting, “Open Your Mouth and Taste the Spores,” Netrabile’s focal point stems from the epic “Ramayana,” in which Goddess Sita is considered to be the ultimate symbol of sacrifice. While the epic is often linked to religion more than philosophy, the characters of Lord Ram and his wife, Sita, his brother, Lakshman, and the Demon God, Ravana, are all considered to be embodiments of different levels of consciousness. When Ram, Lakshman and Sita are exiled to the forest, she is abducted by Ravana after which, she undergoes trial upon tribulation (including a test by fire or agni pariksha), making her the ultimate symbol of suffering and sacrifice oft associated with Indian women.

Netrabile’s interest in Sita lies more so in her etymological roots, as a goddess who was born of the soil of the earth. Sita is also associated with the harvest, agricultural abundance and the fecundity of land. She was believed to be able to communicate with animals, a result of which landed her several earthly arrangements and sacrifices, distracting us from the centrality of her earthly nature. Netrabile refocuses on Sita as landscape, not as one who had been captured and exiled to the forest, but as one with the forest and its elements.

The symbolic act of surrender, the purity of the act of sacrifice and the dissolution of ego remains in smaller-scale paintings like “Sita” and “The Trespasser” (Blue). The presence of silhouetted monkeys in Netrabile’s landscapes diabolically look back at the viewer, as though turning the gaze upon itself. As evolutionary cousins, monkeys remind me of the constant conflict between the ego and the id where the “monkey mind” grabs and claims instant gratification. In these moments, the ego, known for keeping us within socially acceptable norms, dissolves within the forest. There are recurring moments in Netrabile’s work where the fourth wall is broken by the artist, placing the tip of her brush where the cornea of an animal would be. In the simplest gesture, she draws forth the consciousness of the forest, maintaining her focus on the expanse of nature as a throbbing, breathing, cosmically created landscape that she moves through intermittently.

Netrabile has made a habit of carrying a compact notation booklet on her daily walks to nearby wooded areas on the Des Plaines River. Making color notations, inspired by color recipes by famous painters that precede her, Netrabile watches colors change under different light conditions, stopping mid-walk to remember specific tones and hues, penning a manuscript for a painting yet to be. “These sometimes run into ten or twelve pages,” she says. Returning to her studio to channel the experience, “I let the painting be what it needs to be, I’ve gotten used to describing colors with words.”

This curious ability to translate colors into words is linked to the artist’s deep reverence for writing and poetry. Inviting Pulitzer-winning poet Forrest Gander to engage with the exhibition over an intimate reading on October 2, Netrabile’s anthropomorphic ability to see nature and the self as one was shared with Gander’s interest in the transformatory experience of lichen. Gander shared his understanding of “Sangam” poetics, an idea that directly translates as “confluence” for Tamil poets between 300 BCE and 300 CE. Gander described the non-distinction between a human experience of the self and the landscape. Netrabile’s painting “Incoming Storm” came to life as Gander read an excerpt from “Post-Fire Forest”:

What remains of the forest takes place
in the exclamatory mode. Cindered
utterances in a tongue from which
everything trivial has been volatilized,
everything trivial to fire. In a notch,
between near hills stubbled
with black paroxysm, we spot
a familiar sun, liquid glass globed
at the blowpipe’s tip. If this landscape
is dreaming, it must dream itself awake.

In a textural layering of words, natural schema and figurative language and painting, a rich presentation of ideas rooted not only in spirituality and philosophy, but in color science and art history is found at Andrew Rafacz. Working through presence, energetic sensibility and color notation, Netrabile reinforces the fact that just as no color exists on its own, each lies in relation to its adjacent colors, we too as energetic beings lie in adjacency to the natural world. 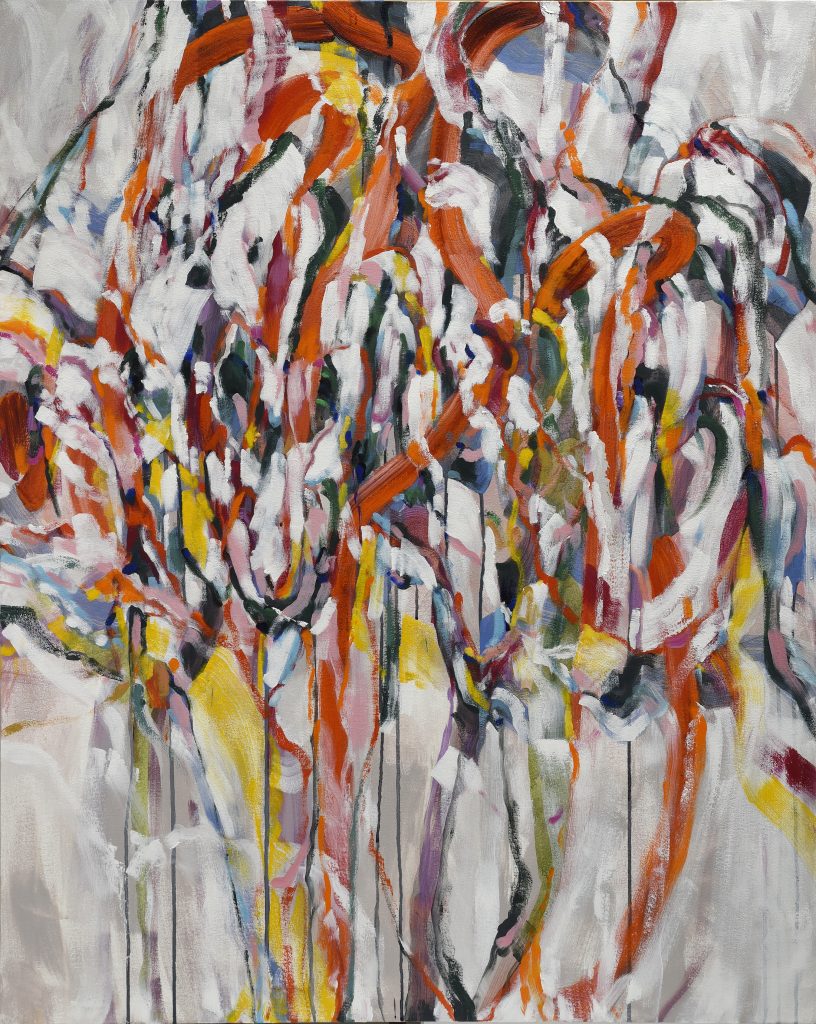 Special mention: Pooja Pittie’s “Nothing Gold Can Stay” at McCormick Gallery makes for a worthwhile pairing to Netrabile’s exhibition, as Pittie’s dream-like conjuring of color palettes and defiant mark making also speak to expression freed from language and biological repression. Pittie’s primary pursuits lie in her interpretation of internalized states, manifesting themselves through varying degrees of control of acrylics on canvas. As an artist negotiating abstract painting with a progressive muscular condition, her energetic strokes compose a collection of large paintings that are inspired and shaped by Pittie’s lived experience. Pittie’s use of color and pigment come from her physiological understanding of practice. She uses the term “bodymind” to assert her practice as an exploration between realms, allowing her body to move through its own knowledge to places that her mind can then resolve on canvas.

In both exhibitions, one finds a reconciliation of inner consciousness and an externalized form of shakti, one that can only be transmuted by a woman.

“Open Your Mouth and Taste the Spores” is on view at Andrew Rafacz, 1749 West Chicago, through October 30. “Nothing Gold Can Stay” is on view at McCormick Gallery, 835 West Washington, through November 6.