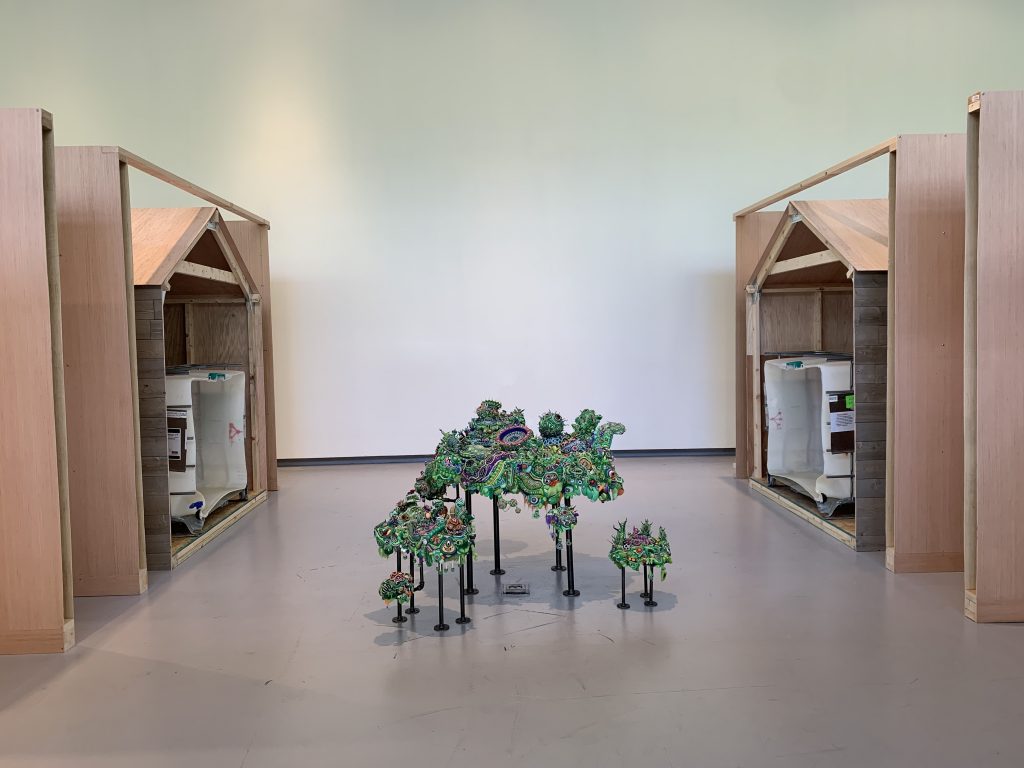 As an artist-in-resident at the Hyde Park Arts Center in 2017, Lan Tuazon was making a series of sculptures out of plastic containers when she first proposed the idea of constructing a house entirely from recycled materials. This fall, the Chicago-based artist’s vision has come together in “Future Fossils: SUM,” an art installation in the form of a one-bedroom home. Keeping in mind the estimate that the average person in America generates 109 tons of waste over the course of their lifetime, Tuazon’s project purports to explore the ecological question of how humans can use raw materials sustainably so that the materials perpetually recirculate, rather than the extractive or linear (“take-make-waste”) way we use resources now.

The concept of this paradigm shift has been around for at least two decades. The influential 2002 manifesto “Cradle to Cradle: Remaking the Way We Make Things,” co-authored by a German chemist and an American architect, advocated that human design and industry should aim for “cradle to cradle” instead of “cradle to grave” use of our planet’s resources. The authors urged designers to take inspiration from nature, to create products and buildings where the raw materials (“technical nutrients”) could be perpetually re-circulated. They even argued against recycling, as recycling often leads to downcycling of materials until they become too expensive to recuperate, and therefore destined to become waste anyway.

“Future Fossils: SUM” opens with an introductory video in which Tuazon explains her interest in making sculptures out of used materials, without extracting any new resources. The artist explains her dedication to designing the installation in a way that ensured that the materials used within this temporary art exhibition go on to find new purposes afterward. This is an admirable point that gestures to the waste that is inherent to the process of producing temporary exhibitions, and inherent to making art in general. For the ecologically minded, why should art be exempted from the same rigorous questions of sustainability? 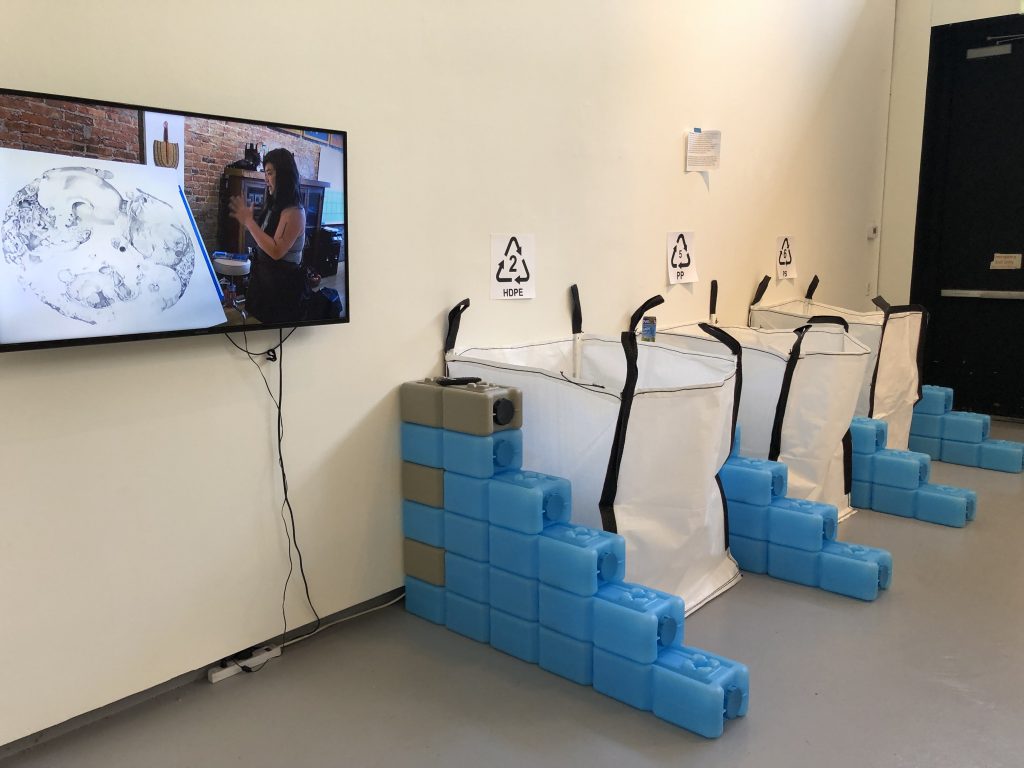 By the gallery’s entrance, there are containers of sorted plastics for recycling, accompanied by signage indicating that visitors and local residents are invited to drop off their own recyclables. These contributions will be treated as raw art materials, to be shredded and pressed into wainscoting-like sheets, then incorporated into Tuazon’s installation throughout the show’s run. The exhibition’s curator and HPAC’s director of exhibition and residency programs, Allison Peters Quinn, says “Future Fossils: SUM” has the potential to make the art center into “a laboratory for radical processes in new material.” One hopes that visiting the exhibition later in its run and seeing the results of these material transformations will substantiate this vision.

Turning then to Tuazon’s installation itself: if one were not told it was intended to evoke a one-bedroom home, one might instead have the impression it is a gallery within a gallery, in which temporarily erected walls create rooms to display sculptures by Tuazon and other artists who work with recovered and reconstituted materials. Among the eclectic array of sculptural pieces, the most compelling are two of Tuazon’s own works. 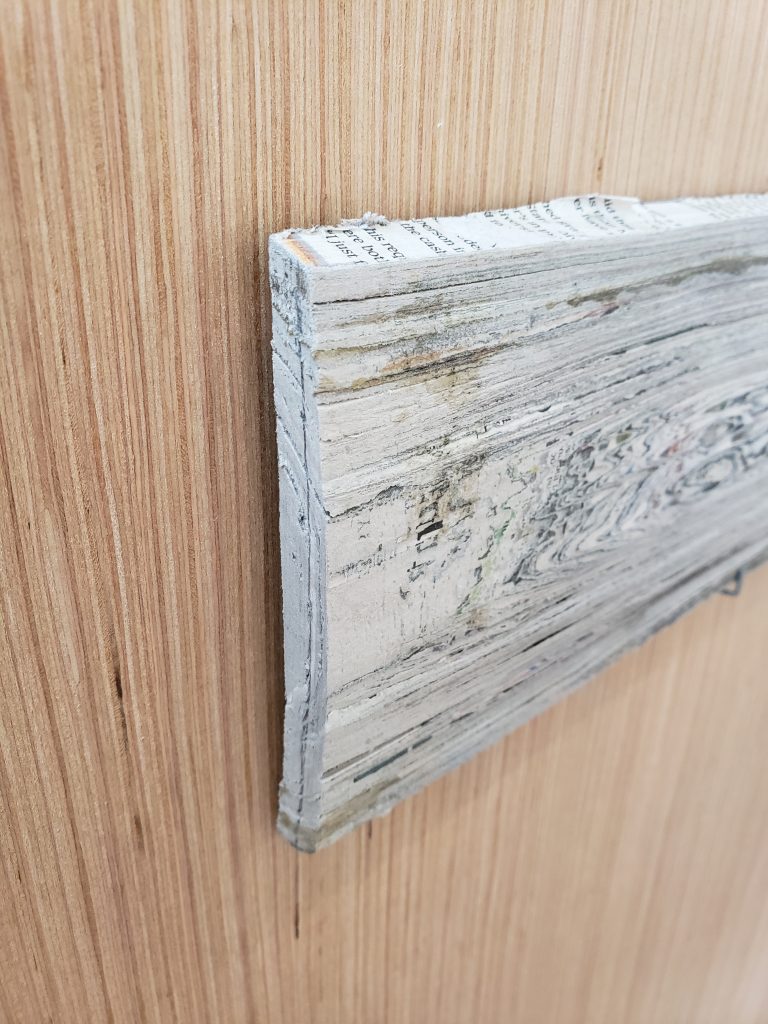 First, mounted to one wall is a slab of a material called “newswood.” Having been around since the 1970s, “newswood” is made by gluing and compressing sheets of newspaper into the dimensions of two-by-four wood planks. The finished product resembles tree wood, but upon closer inspection one discerns the typography and layout of the newspaper page, amusingly transmogrified back into a form referencing where the material came from. If only all the walls were made of “newswood,” instead of sheets of plywood, the material innovation would have greater impact, and the installation would certainly be more immersive. 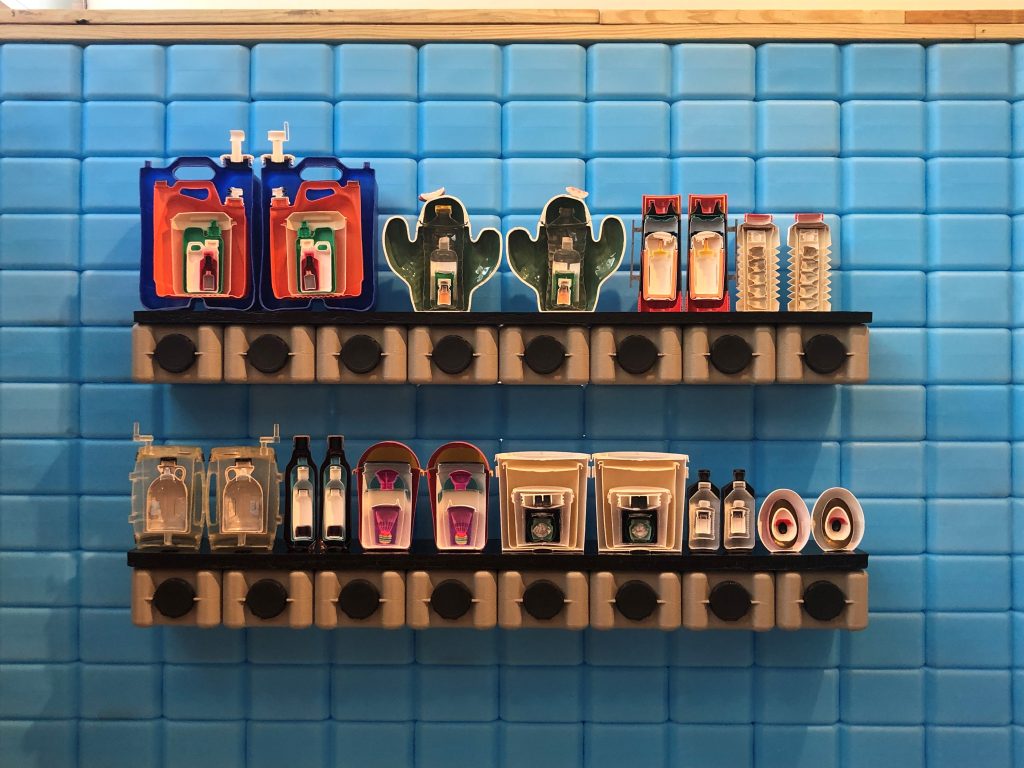 The second of the more engaging sculptural forms are Tuazon’s “Future Fossils,” the exhibition’s eponymous series of plastic containers that have been bisected and nested together. Tuazon began making this series during her 2016-17 artist residency at HPAC. In the artist’s words, these nested forms are meant to evoke the concentric rings of a tree. There are water bottles, dish soap and laundry detergent containers, increasing in size up to rain barrels and plastic water tanks. Do these colorful sculptures pose scalable solutions for how to reabsorb material into everyday life in a functional or practical manner? No, not really. Are they aesthetically and compositionally satisfying, and in a way reminiscent of cleverly constructed matryoshka dolls? Sure, I give them that much credit. 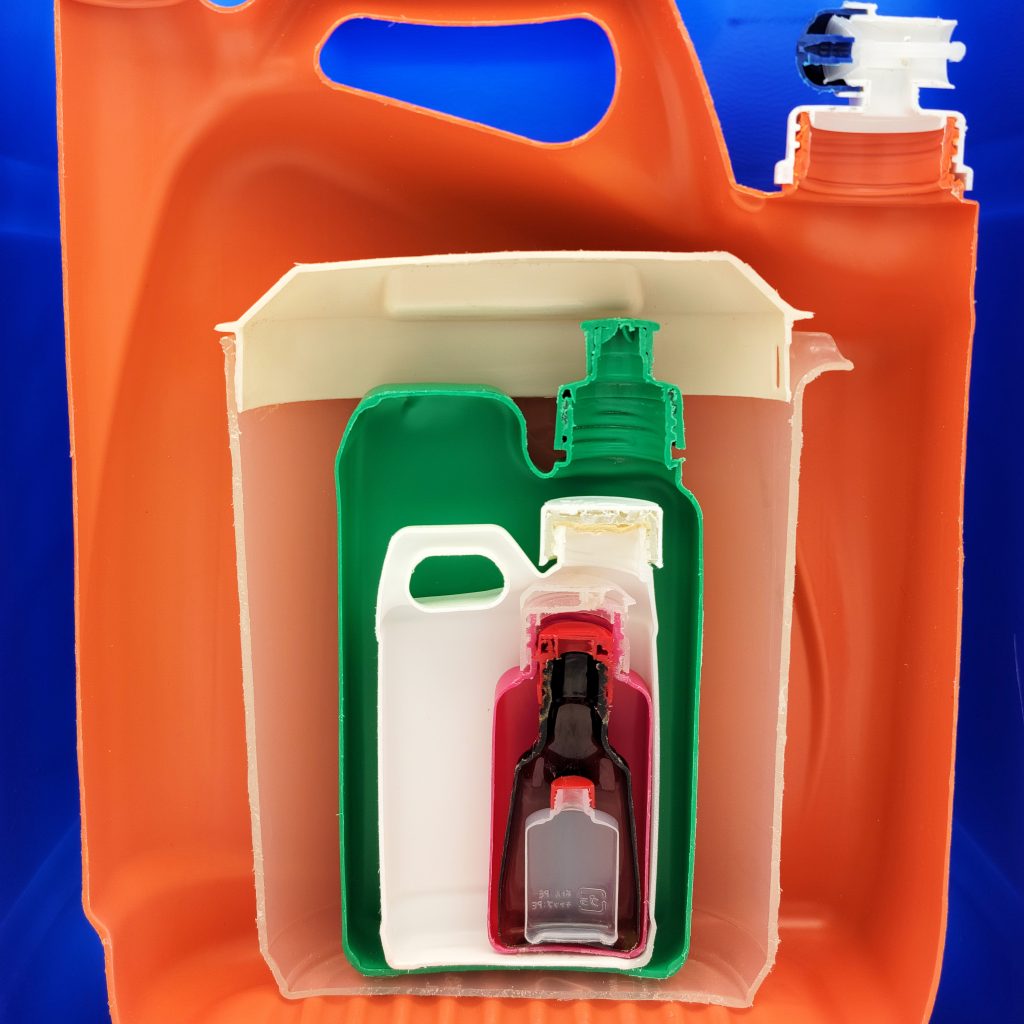 As a whole, the conceptual scope of the exhibition is overly ambitious and way too broad. Instead of making the overinflated ideological claim that this installation could “put into perspective the geologic weight of our consumer habits,” “Future Fossils: SUM” would have been better off doing away with the framework of the domestic space—which comes across as a vague and minimal gesture, nowhere close to a serious proposition of a house of the future—and instead focusing more specifically on the agency of artists when it comes to questions of sustainability and ecological responsibility. 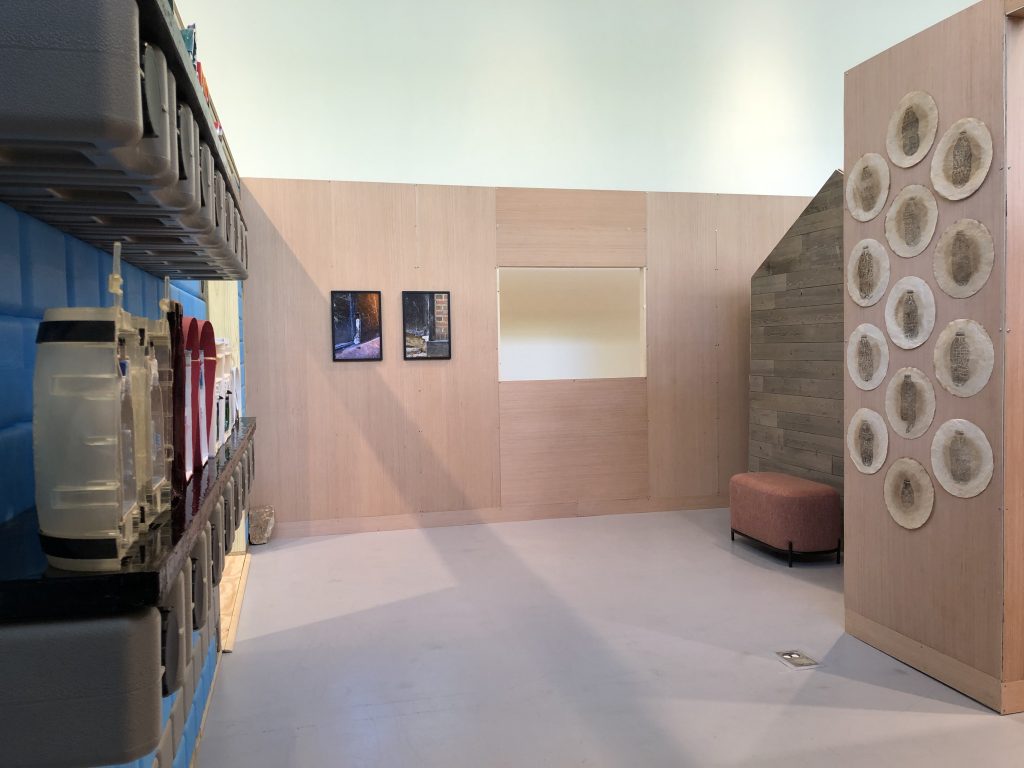 Artists around the country are grappling with these questions. There are dynamic, creative spaces at the intersection of art and environmental concerns such as Recology in San Francisco and RAIR (Recycled Artists in Residency) in Philadelphia, both of which are embedded in recycling centers and provide artists with on-site studio space as well as direct access to the urban waste stream as a trove of raw material. It would be fantastic if Chicago had a space that provided such valuable access and exposure for creative thinkers.

Having personally spent a season working at RAIR, standing in the dumping yard as truck after truck pulled in, I will never forget seeing for myself the mountains of waste as they rose around me, shrank as materials were sorted, and inevitably rose up again. Some trucks dumped construction waste, others dumped the entire contents of an individual life (usually several times a day, a 1-800-GOT-JUNK truck would roll through with the contents of a house cleanout, presumably after someone had passed away). I can attest that those hours provided potent creative inspiration along with a true sense of urgency. My sense is that “Future Fossils: SUM” was intended to inspire some of this energy, as Lan Tuazon has stated that her sculptures “are meant to be evidence of the very things we deny,” and that she intends for her artwork to “give visibility to the nature of our condition.” The stated goal is a noble one, but “Future Fossils: SUM” falls short of both conveying much “geologic weight” and only scratches the surface of alternate material possibilities.