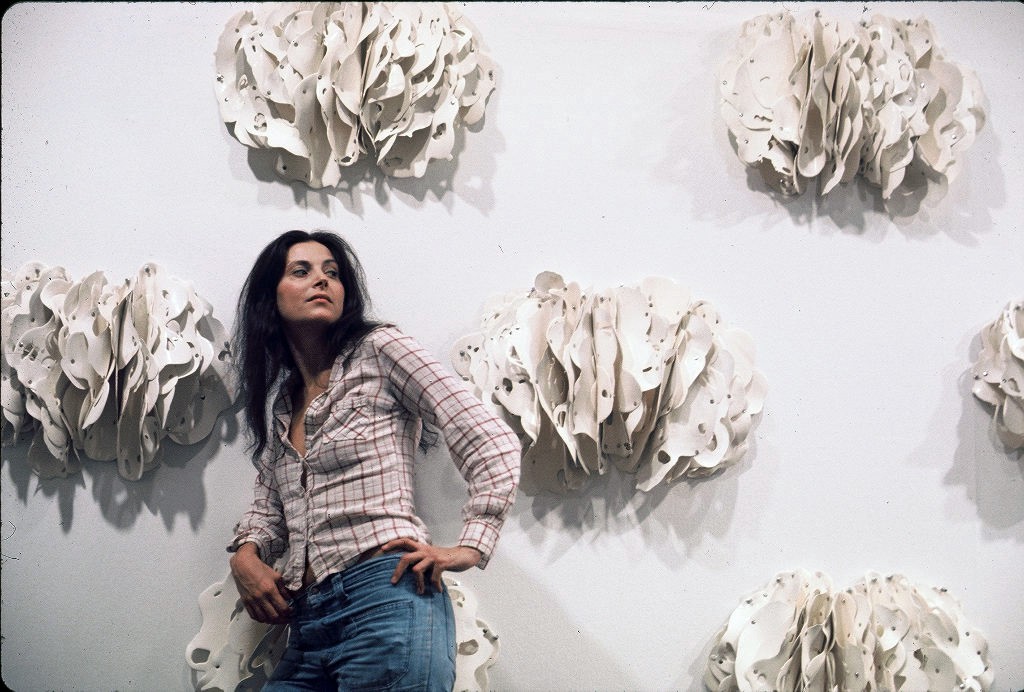 Inside the entrance to St. Louis’ Pulitzer Arts Foundation, a quote from the late artist Hannah Wilke reads in bold red letters: “I have always used my art to have life around me. Art is for life’s sake.” The quote succinctly captures the ethos that drove Wilke’s career, which is stunningly portrayed in this retrospective, her first career-spanning exhibition in over a decade.

The retrospective takes up the entire museum, with each gallery offering a concise selection of Wilke’s work, staged in roughly chronological order. The first gallery displays rarely shown drawings and clay sculptures made in the early-to-mid-1960s. In the drawings, bulbous shapes resembling body parts such as breasts and knees overlap and fuse together, often laid over more solid geometric forms. The drawings are made in light, almost pastel tones. The clay works in this room show the beginnings of Wilke’s use of the vagina motif. Using clay, Wilke would layer sheets of clay into a folded vagina rendering, or would sometimes shape clay around a square or rounded base. In this postwar era, and as a Jewish artist, Wilke was set on making work that valued and affirmed life, which is evidenced in her use of earthy materials and her focus on sexual organs.

The main gallery, also on the first floor, depicts Wilke’s further experimentation with clay. On the floor sit glass boxes featuring Wilke’s vagina-like sculptures, now in beautiful light shades. Wilke made these forms by hand, so no two are exactly alike. These differences not only underscore the unique beauty of the human body, but were also a reaction to the mechanical perfection of the era’s Minimalism. Many critics have pointed to the gender essentialism at work in Wilke’s focus on the vagina, which she linked to women. But, as Nina Renata Aron writes in Jewish Currents, the diverse depictions of Wilke’s vaginas also seem to point to “the mutability of the vaginal motif” and “the constructedness of the organ and all that it signifies.” 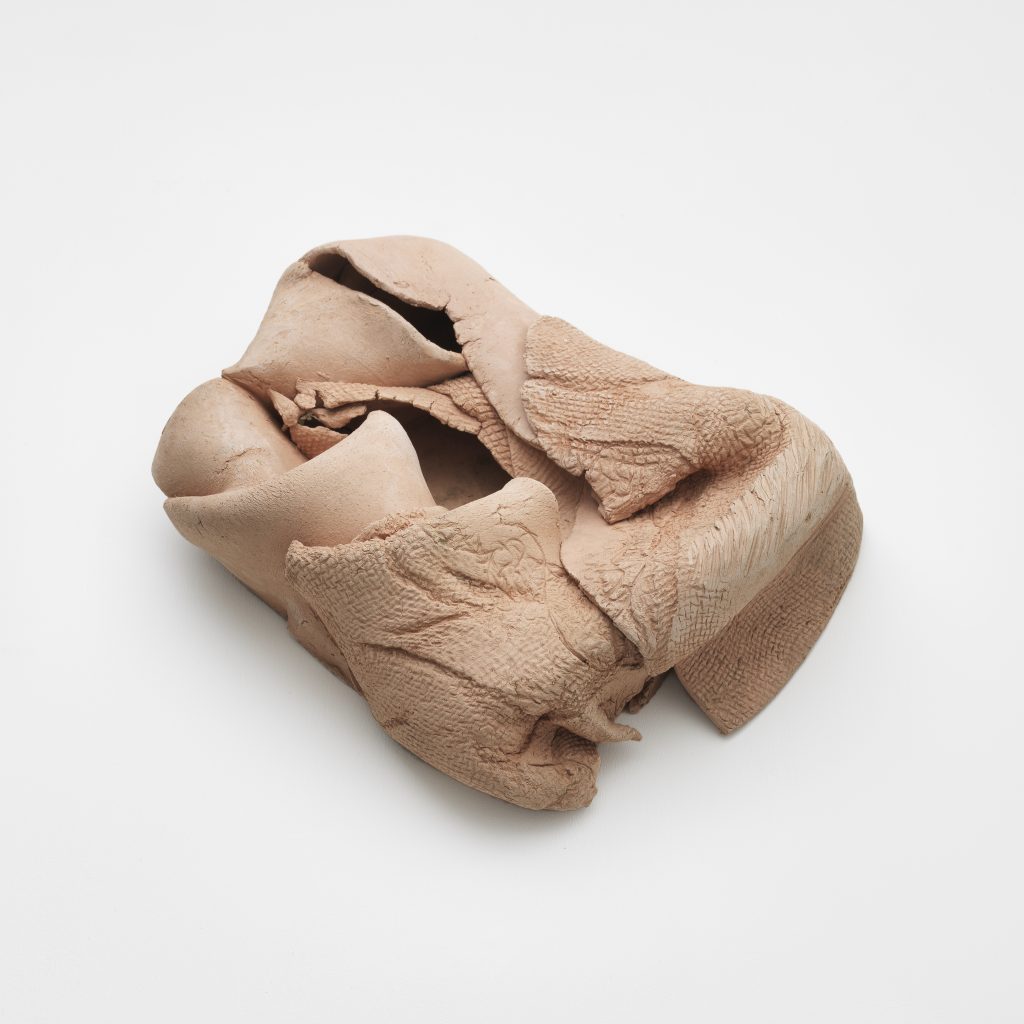 In the mid-1970s, Wilke used chewed gum to make tiny vagina sculptures, shown in a series of work in the next gallery. Here, the folded gum, seen in various colors, some a multicolored blend, recall the cutout photographs of butts in Chris Ofili’s iconic “The Holy Virgin Mary”—to me another example of the changeability of bodies and the ways they are represented. Also on view in this room are wall-mounted abstracted vaginas made out of latex. Wilke’s use of these materials, which were meant to deteriorate with time, was purposeful, referencing the vulnerability of life and the inevitability of death as a part of the life cycle.

During this period, Wilke also began using photography and video, often using her own body as material, applying tiny vaginas to herself and co-opting the language of fashion advertising. In her well-known, “S.O.S. Starification Object Series,” a partially nude Wilke adopts the poses of a model, albeit one with hairy armpits and tiny gum vaginas affixed to her face, fingers and torso. The gum looks like warts at first glance; according to the exhibition catalog, Wilke spoke about the gum as scars that reference “the marking and dehumanization of Jewish people during the Holocaust.”

At the time, Wilke’s self-portraits were widely dismissed by critics—some called them narcissistic, Phyllis Derfner said the work was “boring and superficial.” In a 1976 essay, Lucy Lippard slammed Wilke for confusing “her roles as beautiful woman and artist.” Yet viewing this work, which the artist called “performalist self-portraiture,” today, Wilke appears startlingly prescient. She brilliantly complicated the ideas of free love and sexual liberation, of body positivity and women’s agency, often doing so in a self-deprecating way. Wilke even took other so-called feminists to task in a series of photographs, including one which warned: “Beware of Fascist Feminism.” This series was much deeper than critics gave her credit for, as she commented on women’s diminishing societal value over time, and the way women are sexually and commercially exploited. In “Hannah Wilke Can,” from 1978, Wilke’s sexy likeness is featured on a tin can with a slit in the top for donations. 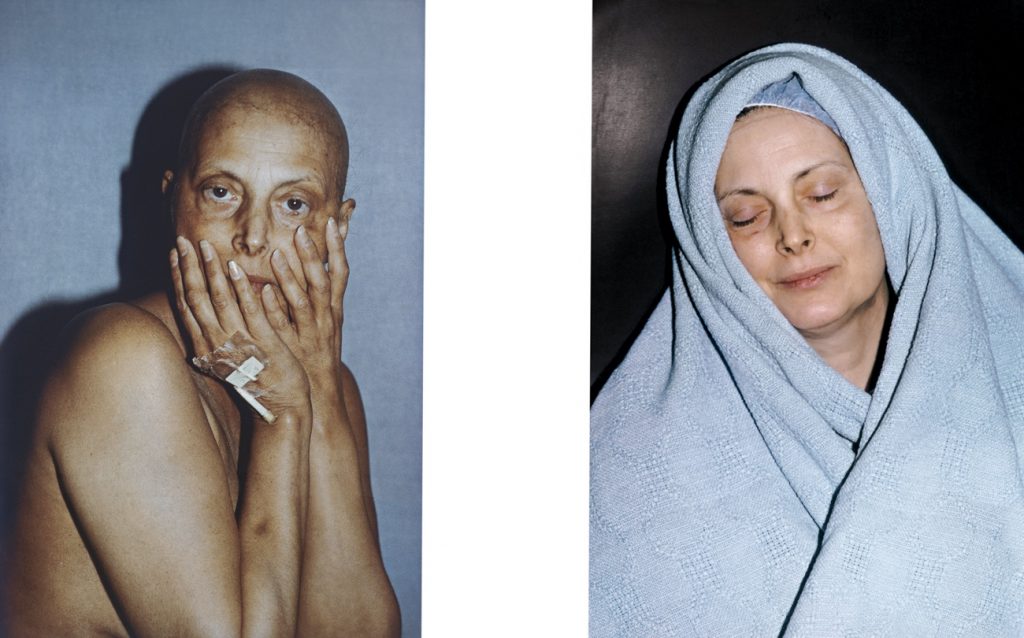 Wilke continued to use herself and her life in her work, including in a gorgeously poignant series about her mother, Selma Butter, who died of breast cancer in 1982. In black-and-white photographic triptychs of Butter going about life—sometimes sleeping peacefully, sometimes donning a wig, sometimes mugging for the camera, Wilke shows her mother as deeply human. Below the photos are abstract paper cutouts matched with words such as “bond,” “foundation” and “care.” Wilke continued to make clay vagina forms in this period, depicted in this gallery in bright, lively colors, but began thinking of them as wombs or tombs.

In the haunting “Portrait of the Artist with Her Mother, Selma Butter,” Wilke pairs a color portrait of her mother, topless and showing her mastectomy scar, covered with sores, with one of herself, also topless, her torso covered with small objects she had collected for her former partner, Claes Oldenburg. Wilke received her own cancer diagnosis in 1987. (She died of complications from non-Hodgkin lymphoma in 1993, at the age of fifty-two). The “Intra-Venus Series,” her final works, chronicle that experience, with Wilke posing in the phrasing of classical artworks, unabashedly showing the realities of her illness.

The exhibition doesn’t end here. In order to display the cohesiveness of Wilke’s oeuvre, and its focus on affirming life, which Wilke noted throughout her career, curator Tamara Schenkenberg fills the final gallery with works on nature. In her “Gum in Landscape Series,” Wilke’s gum sculptures were placed on flowers, tree branches and rocks, like tiny snails or sea shells. Also on view are simple flower drawings, a coy video from 1975, as well as a colorful batch of clay sculptures, positioned like flowers in a green case on the gallery floor. Titled “Hannah Manna,” the sculptures are accompanied by a typed sheet of paper, signed by Wilke in 1986. It’s an etymology of her first name that morphs into a sort of prose poem, but it could easily be an artist’s statement. It reads, in part: “(Hebrew Hannah, grace. Japanese Hana, flower. Chaldean Ana, heaven. Sanskrit Ana, mother. Assyrian Anu, all-father… Womblike blossoms resembling Venus mounds, a centerfold evolving from a circular plane… Food from heaven, hence spiritual nourishment. Called angels’ food.”

By challenging the accepted norms of how women artists—even beautiful ones—were supposed to work, Wilke helped to force open the strictures of the art world. Using her body, in states of both youthful vitality and disease, Wilke made herself vulnerable, again a nod to the tenuousness of life. Wilke, who was born Arlene Butter, renamed herself Hannah. Did she realize its life-giving connotations at the time, or did her work naturally grow in that direction? Whatever the reason was, Wilke’s work was inarguably sensuous, full of life, spiritually nourishing.