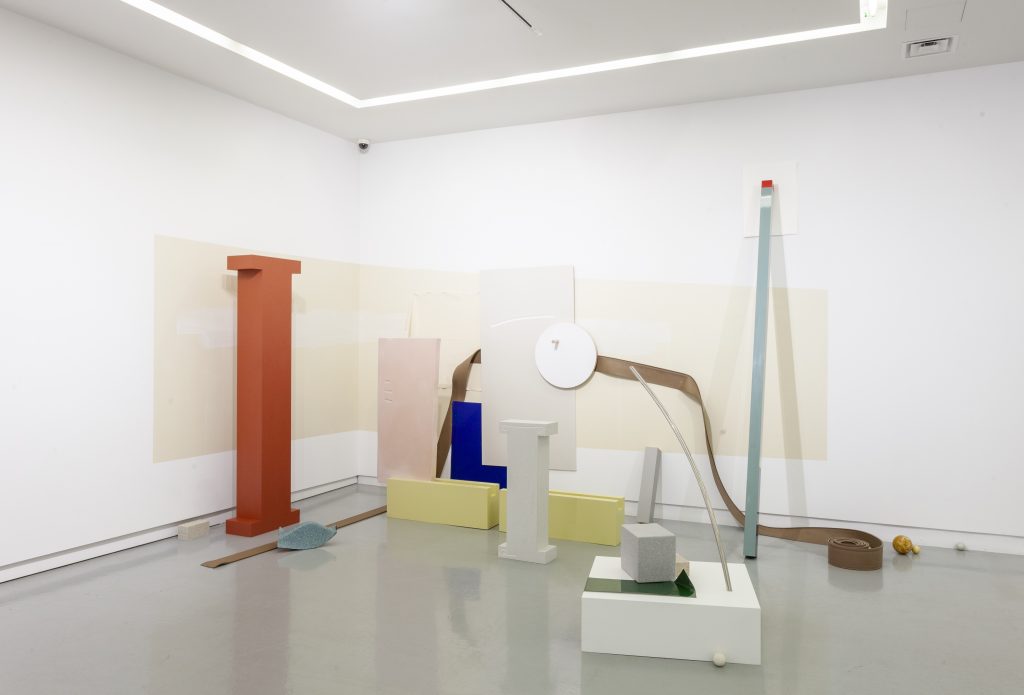 It’s not that readable texts or representational images necessarily diminish an artwork, but some of the best artists, both young and old, continue to work without them. Several live or show in Chicago, so the manifesto-like title of this exhibition got me eager to see that kind of work. It needs aesthetic intensity since it has no mimetic, political or theoretical concerns to validate it.

But if “Surface is Only a Material Vehicle for Spirit,” then why are so many surfaces in this exhibition also vehicles for text or representations? This show relates less to “the field of contemporary abstraction” than to curator Kennedy Yanko’s own artwork, as was shown in this same gallery two years ago. Most of Yanko’s pieces in that show contrasted the ruggedness of banged-up oil cans with the smoothness of gallon-sized paint skins. Sometimes it appeared that the bladder-like paint skins were being defecated, but overall the pieces proclaimed: “From this rusty old junkyard into which we were born… a fresh, free, unpredictable spirit has emerged.” It’s something like the foundational myth of America itself, except that this free spirit is feminine, not patriarchal. It flows like a river, it does not smash, build or possess like a John Wayne rancher.

Several of these artists also relate to junkyards. Chiffon Thomas and Alexandre Diop appear to have found their battered, neglected, grungy materials there. Charles Mason III brings a dumpster aesthetic into his paintings, or, treating them like refuse, he throws several into a heap on the floor. 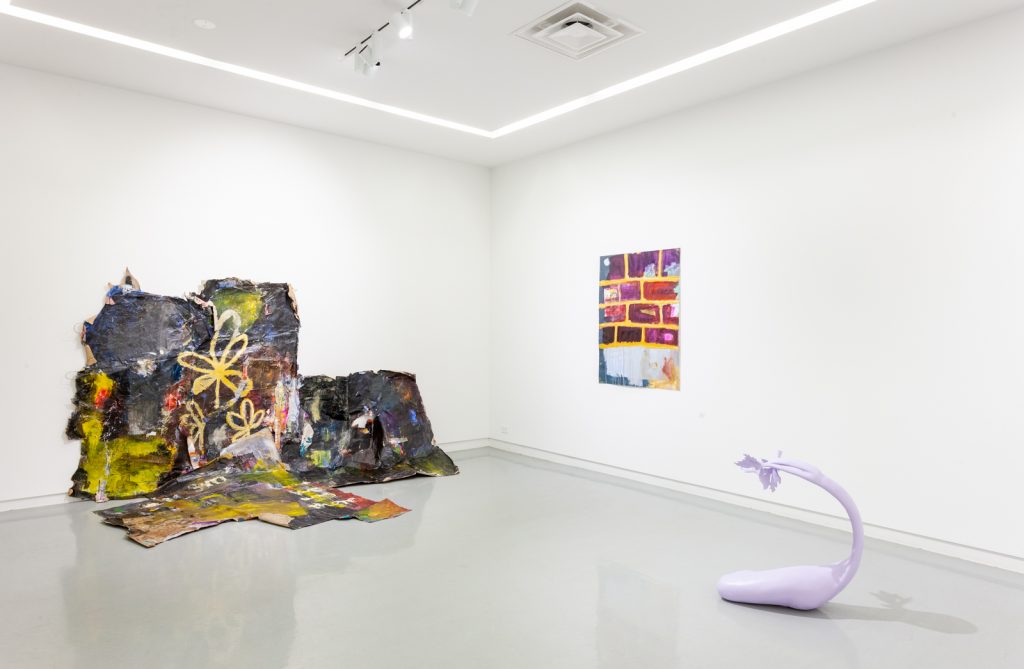 Others relate to Yanko’s feminist sense of humor. Jessica Stoller builds female body parts into her kitschy ceramics while Gracelee Lawrence includes them in her more elegant 3-D prints. Katie Bell’s installation of geoform objects is more like a spoof of early male modernists than a contribution to the tradition. It’s tightly organized from only one point-of-view, yet even that cannot compare with the formal energy of graphics by El Lissitzky.

Only the pieces by Monica Rezman and Pamela Council appear to be primarily about the effect of shapes, colors and textures. Rezman paints geoforms on canvas, but rather than being stretched, the fabric has been cut, torn and shaped—and maybe even repurposed from something in the alley. The results feel fresh and unconventional. Council makes monochrome silicone panels.  Though better known for her “Afro-Americana camp aesthetic,” these pieces could serve as decorative accents in five-star hotels anywhere in the world.

The strongest spirit among all this, however, is delivered by the text, as well as the form in the paintings of Charles Mason III. Other artists may deliver attitude or wit with force and skill, as did artist-curator Kennedy Yanko in her 2019 show. But Mason’s paintings demand a deeper understanding, even if it proves elusive. They essentialize that one great drama each person knows best: their own lives. And so they feel less clever, but also more real. Grimly, they point backward to personal struggles rather than forward into a brighter future. But so did many of the early heroes of American Abstract Expression. (Chris Miller)

“Surface is Only a Material Vehicle for Spirit,” Kavi Gupta, 219 North Elizabeth, through December 23.