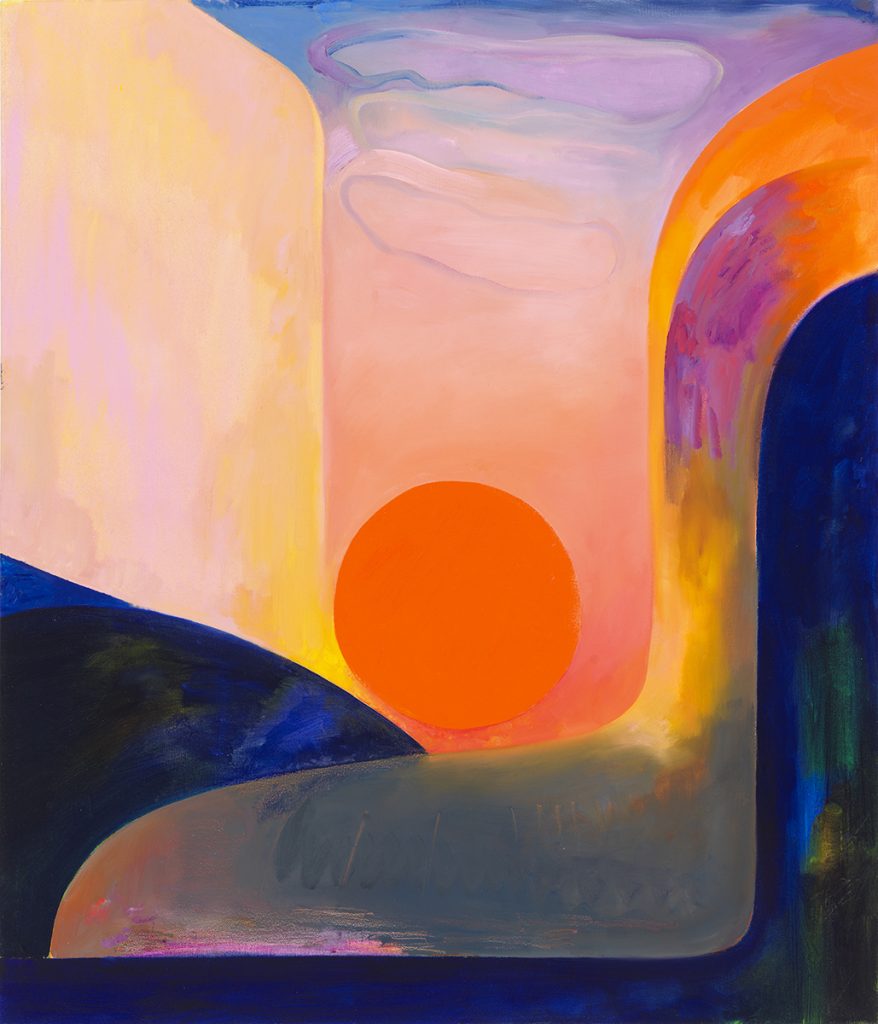 An image of “Sunset Drive” by Nina Rizzo promotes the current show at O’Connor Art Gallery, and that’s what pulled me to the gallery, on the fourth floor of Lewis Hall at Dominican University. The oil painting is a mystical vision, and it was worth the trip to River Forest to see the texture and color exactly as the artist had brushed it out. You stare into the big orange circle and for a moment this crazy world all makes sense. Rizzo’s other pieces in the show are less visionary. Perhaps the artist is more excited about graphic design than higher states of consciousness.

The O’Connor gallery is modest compared with the exhibition spaces of other area major universities. That might explain why it is less concerned with “shaping and challenging our understanding of the past,” (as Northwestern’s Block Museum puts it), and it just lets the curator choose whatever pleases her eye. Instead of agitprop on issues of racial and gender identity, we’re shown things that mostly exemplify skillful, expressive facture in a variety of media.

Alexander Richard Wilson does write about his Black and queer identity in relation to his dazzling Colorado landscapes, but without that text, they recall Georgia O’Keefe and the hyper-chroma stylized views painted by the Taos school a hundred years ago. Like several Chicago painters from that era, Wilson’s Midwestern eyes were apparently thrilled by the jagged mountainous horizons of the American West.

Jon Seals offers a more subdued reaction to the typically Midwestern terrain of the wide and shallow Kankakee River. He’s painted faint, ghostly horizontal bands using river water and dirt in his media. It’s an understated tribute to one of our area’s most monotonous streams. Soumya Netrabile’s paintings are much less specific regarding the natural world. The foliage depicted is the kind that appears in wallpaper rather than gardens. It’s more psychological than merely decorative, though not especially forceful or eye-catching. Jaclyn Mednicov’s cast paint skins are closer to the natural world and also more enjoyable. She pours wet plaster over arrangements of dried twigs and small flowers. Then she fills the impressions in the hardened plaster with thick acrylic paint and peels it off when dry. It’s what would have been called craft, back when craft was distinguished from art. With extended viewing, however, you can feel a resilient, complex design struggling to emerge from the awkward marks, sagging outer edges and uneven surface. 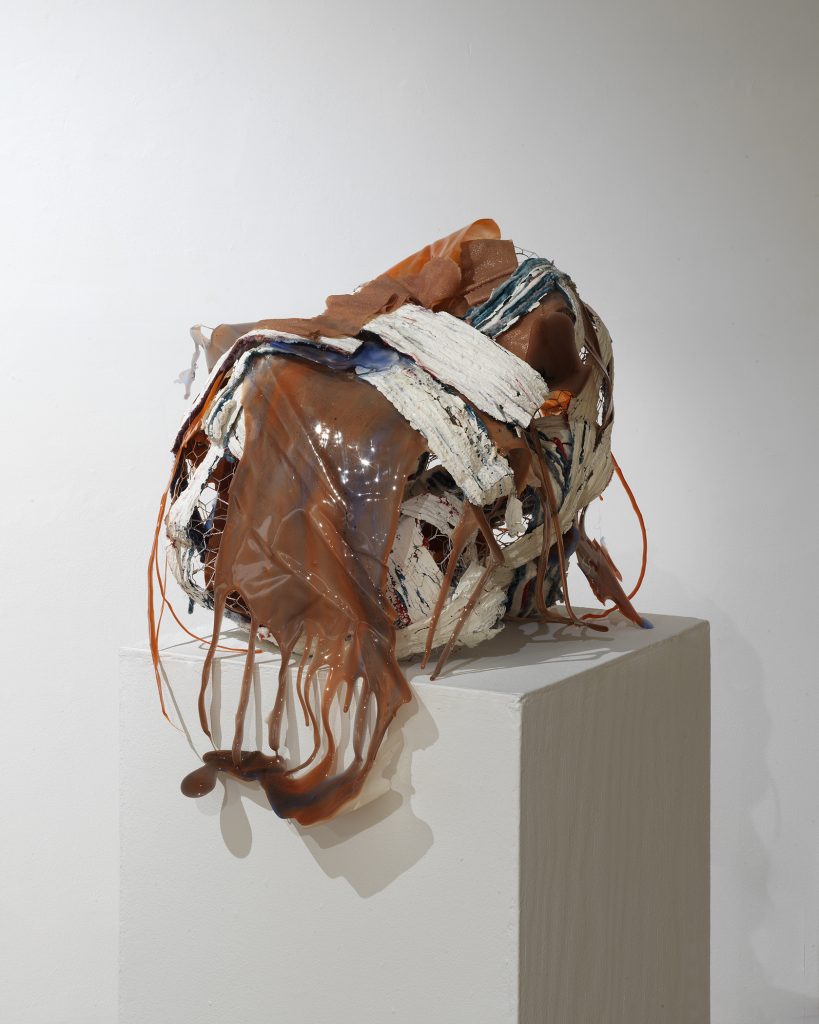 “Head 1” by Judith Mullen, from “Lay of the Land” at O’Connor Art Gallery/Photo: Tom Van Eynde

Judith Mullen’s conglomerations of just-about-anything might also have been called craft, except that the contrasts of textures and shapes are so striking, inventive and absurd. It’s impossible not to smile at their formal irreverence, and inner dynamics make some views look surprisingly good. All of her pieces feel alive.

The curator of this carnival of diversity is Karen Azarnia, a sensitive painter herself. It’s important to have this kind of noncommercial show because so much local art does not have a local gallery that can sell it. Rizzo and Mullen were once shown by Linda Warren Gallery, which closed last year. Yet still we might note that there was not a single perceptual landscape in a show called “The Lay of the Land.” Institutional nonconformity does have its limits. (Chris Miller)

“Lay of the Land” is on view through December 8 at O’Connor Art Gallery, 7900 West Division, Lewis Hall, River Forest.