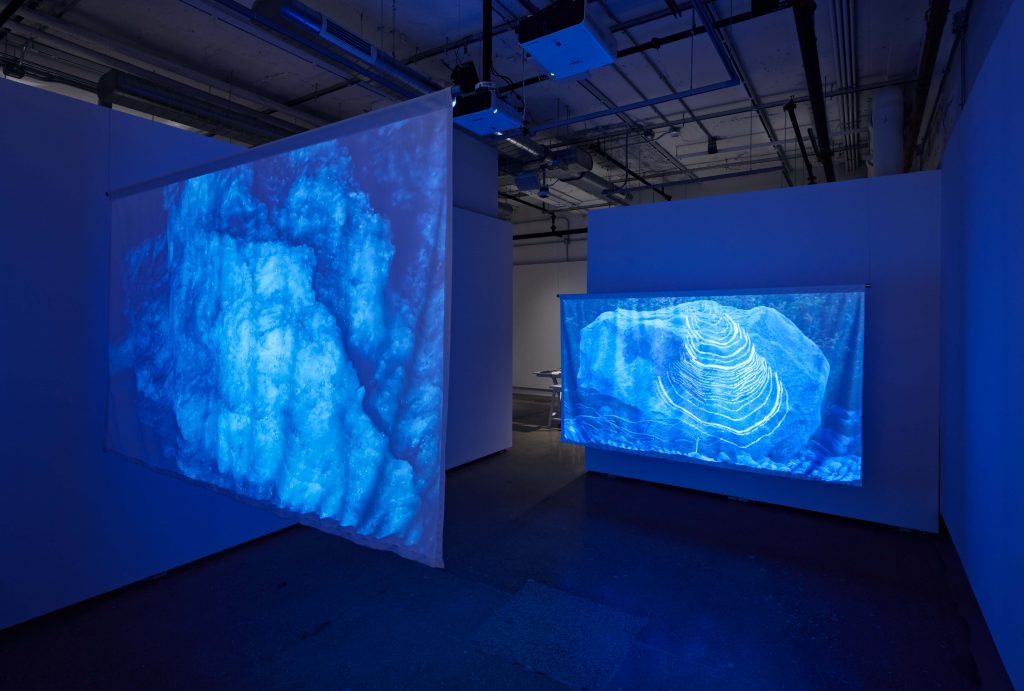 Meredith Leich, “Animated Drawings for a Glacier, 2018–2021″/Image courtesy of the artist

“Earthly Observatory” is a wide-ranging group exhibition that considers the relationship between climate change and social justice, making the case that education and acknowledgement are crucial first steps to social change. Curated by SAIC faculty Giovanni Aloi and Andrew S. Yang, the show features work by more than thirty artists grouped into five overlapping themes. The exhibition couldn’t be more timely, coinciding with the disappointing news out of COP26, where pledges to cut emissions fell far short of the 1.5-degree celsius limit that scientists say is necessary to avoid severe climate disasters.

The show is mostly installed in the lower levels of the new SAIC galleries—though there are some works on view at street level. The lower-level galleries open with a metal sign installation by Hock E Aye Vi Edgar Heap of Birds. The three signs, part of the artist’s ongoing “Native Hosts” series, each feature “Chicago” spelled backwards at the top, followed by text informing the viewer that their host today is either Ojibwe, Odawa or Potawatomi. These three tribes, also known as the “Council of Three Fires” are native to the land we now call Chicago. The project is also installed outside SAIC’s 280 South Columbus building, which the school’s Native American Student Association has petitioned to be renamed. 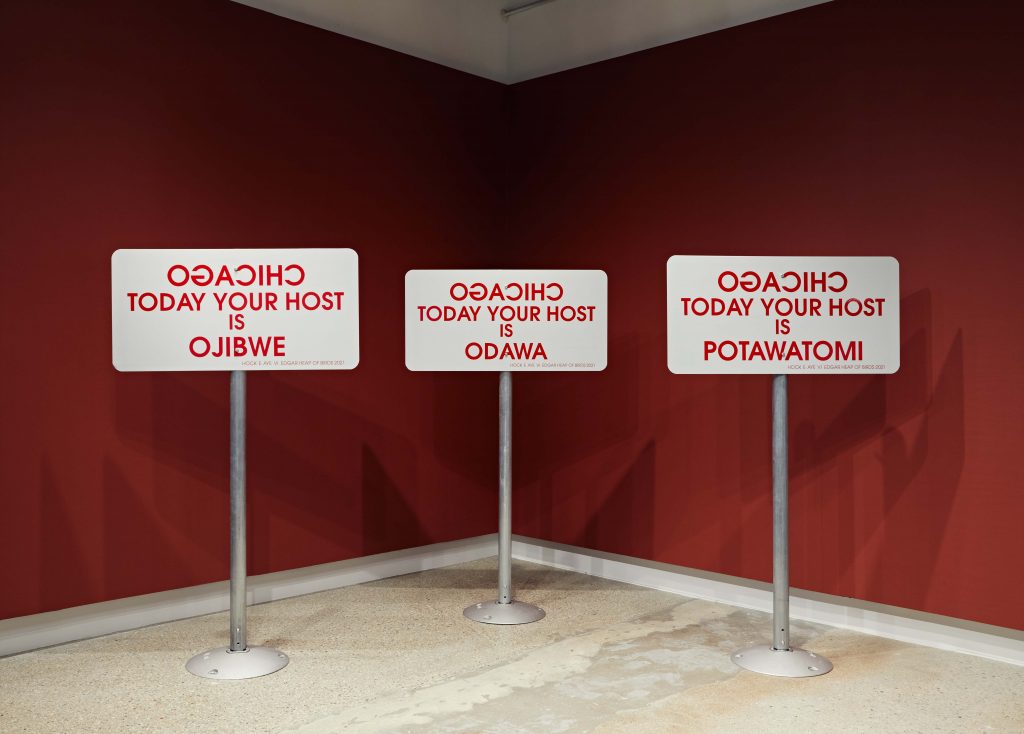 “In one way or another, each work tampers with institutional or historical narratives to make us rethink our certainty and see everything we thought we knew afresh, from different perspectives,” Aloi said in an interview. Heap of Birds’ signs immediately set the viewer up for this reconsideration.

To the right are some of the strongest works in the show, chosen to represent the theme “Vulnerability and Communality.” Terry Evans has a stunning series of large-scale aerial photographs documenting the petroleum industry’s pollution on Chicago’s Southeast Side. Fluorescent swaths of blue and green stream through the Calumet River and Big Marsh, making the environmental damage duly visible. Nearby are a band of striking black-and-white portraits of neighborhood activists, who earlier this year staged a hunger strike in protest of the planned relocation of General Iron’s scrap metal plant from Lincoln Park to the Southeast Side.

Norman Long, an artist from the Southeast Side, often makes work in and around Big Marsh Park and its environs. For this exhibition, one of his subtle sound works plays a mash-up of electronic sounds and the flora and fauna of the park, which the city has been slowly regenerating.

Nearby are two black ash vessels, made by Potawatomi/Ottawa artists Kelly Church and her daughter Cherish Parrish. Church’s stunning basket is in the shape of the invasive emerald ash borer, which has been destroying the black ash trees which are needed to continue the basket-weaving tradition. Meanwhile, Parrish’s work resembles that of a pregnant woman, making a connection between this intergenerational knowledge-sharing practice. 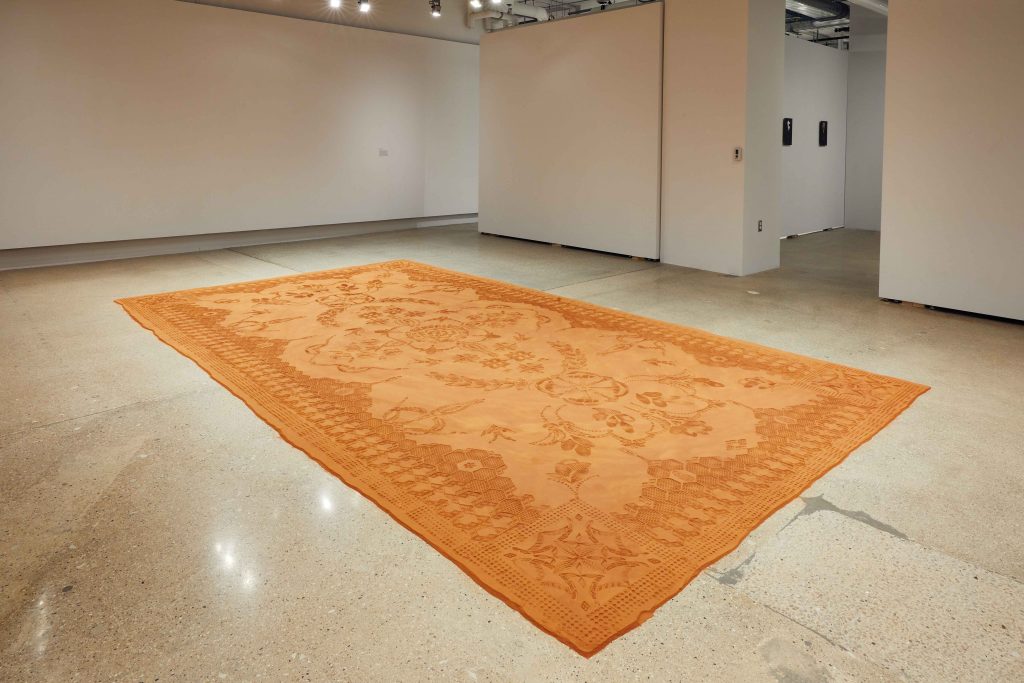 One of the most striking works is Rena Detrixhe’s “rug” made of red Oklahoma soil. Printing the soil using the patterned rubber soles of different shoes, Detrixhe has created an ornate rug design—presenting both the beauty of the earth and our trampling of it.

Throughout the exhibition, artists use hard science, observation and artistry to explore issues around land, ecology, climate change, and the relationship between humans and the natural world. How have military actions affected plant life, air quality or ways of living? Isa Hashimoto’s startlingly simple video shows a static map of the world, with glowing dots that illustrate the location of the 2,053 nuclear weapon detonations between 1945 and 1998. Similarly, a pairing of works on controlled burns by Erin Wiersma and Katie Kingery-Page draws attention to the pressing debate around fire suppression, which has been exacerbated by the increasing intensity of wildfires. Many exhibitions have purported to explore the Anthropocene as of late, to varying degrees of success. Here, Aloi and Yang aren’t merely describing the issues at hand or applying future-oriented perspectives that may be impossible to realize. By highlighting artists deeply involved in research-intensive or embodied practices, the exhibition forces us to question what we know, or think we know, about our environments. It invites us to continue to decolonize our thinking, and looking, if we ever hope to meet the challenges of the day. (Kerry Cardoza)

“Earthly Observatory” is on view at SAIC Galleries, 33 East Washington, through December 3.