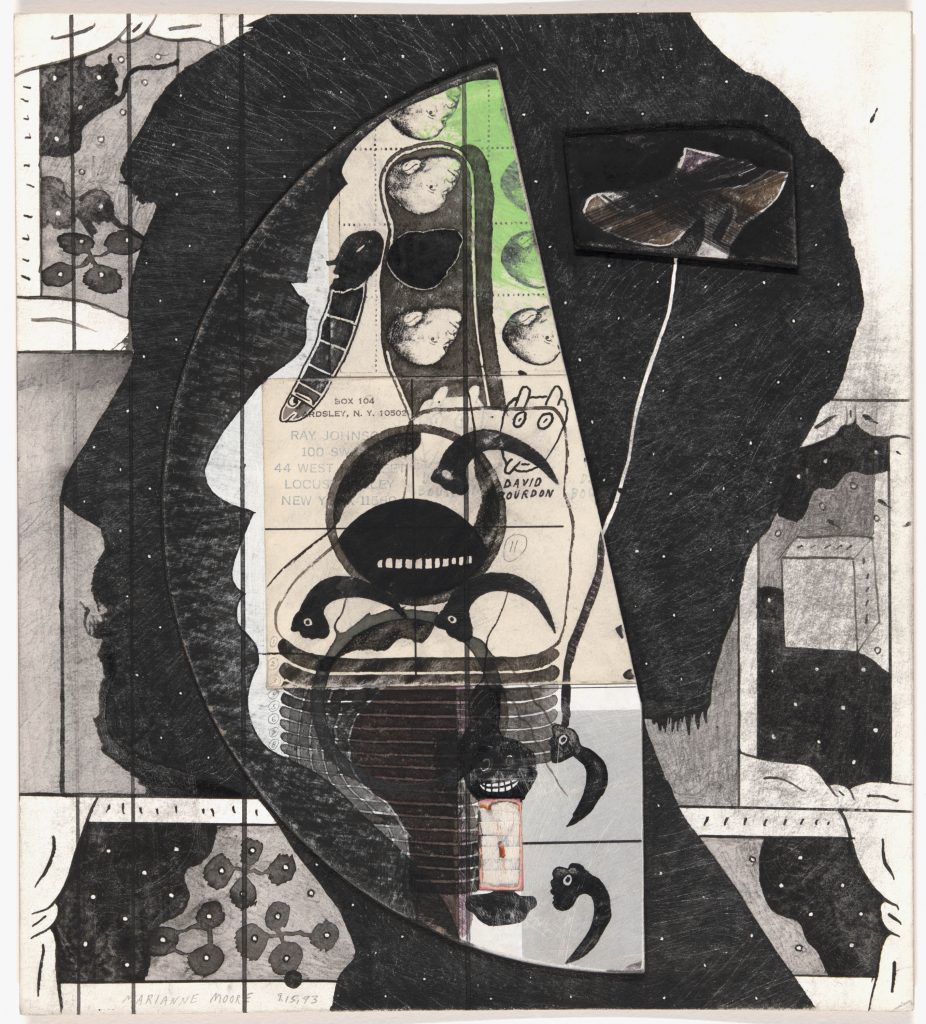 For the artist Ray Johnson, the envelope provided a repository to transmit his two foremost activities: letter-writing and collage-making. One, a pedestrian mode of communication, the other, a seminal art form of the twentieth century, Johnson’s correspondence and art merge under the stamped cover of an envelope. In a typewritten document dated April 1, 1964 and titled “Correspondance Art”—an intentional misspelling that permeated his writings—Johnson frets over the precarious distribution of sixty-two envelopes containing letters and fastidiously arranged paper scraps. He imagines the sequencing of these collaged fragments, ordered from smallest to largest, falling apart in heedless hands. Without visible import or advance instructions from the sender, these envelopes invite violent openings: in the swoop of an animated finger the careful compositions could spill out of order. Once art matter, now junk mail.

Johnson poses a solution for elevating his postal activity beyond the status of non-art: “Would sending the stuff to a Museum and a Curator assure these little baby seeds of an Art class–ification?” Considering the implications of this action, he concludes, “At this moment I wish to be taken quite seriously.” 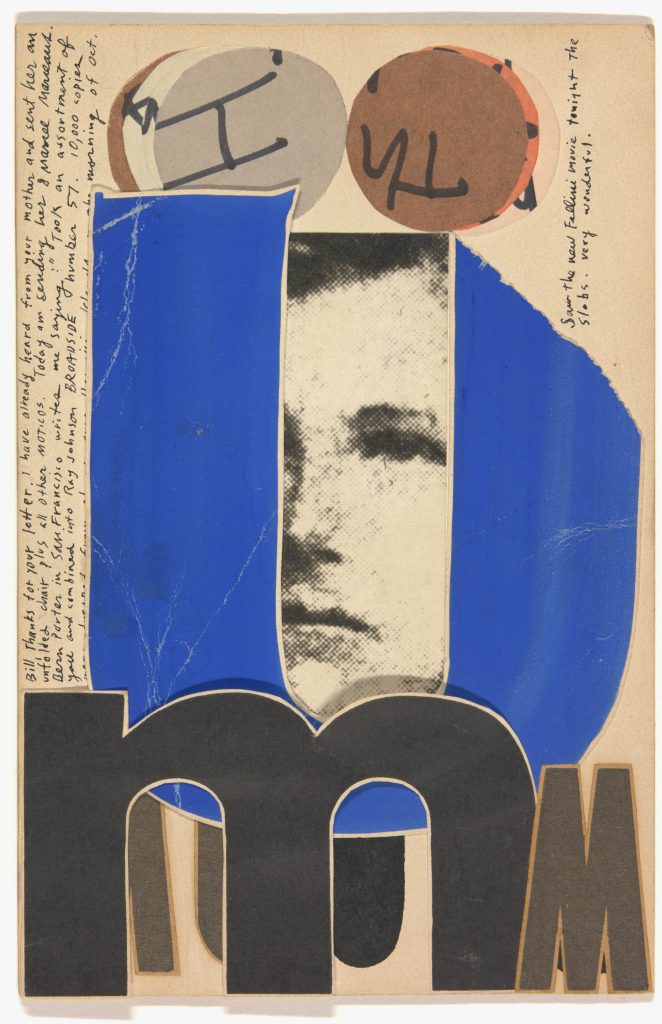 In November of 2018, Johnson’s “stuff” was sent to the Art Institute of Chicago. The contents of this shipment constituted a major gift: The William S. Wilson Collection of Ray Johnson. This gift contains thousands of materials—ranging from correspondence to special projects to artworks—mailed by Johnson and collected and archived by his longtime friend and collaborator Bill Wilson. Cataloguing of this gift began in the summer of 2019 through a collaborative research group composed of internal colleagues, as well as researchers and scholars. The outcome of these efforts is an expansive publication and a major survey of Johnson’s creative endeavors, “Ray Johnson c/o,” that opened to the public on November 26. Curated by Caitlin Haskell with Jordan Carter, the exhibition brings together the full assortment of Johnson’s enterprises from his time as a student at Black Mountain College to the years before his death, where he resided in relative solitude in Long Island. The checklist includes paintings, collages, postcards, publications, drawings, design flyers, writings, mailings and extends to the material remnants of ephemeral performances and events. While past exhibitions, such as the groundbreaking 1999 traveling exhibition “Correspondences,” attended to the breadth of Johnson’s production, this presentation of so-called Johnsonalia differentiates itself for the ways in which it foregrounds and models the immense care that Wilson took to preserve Johnson’s life and work. 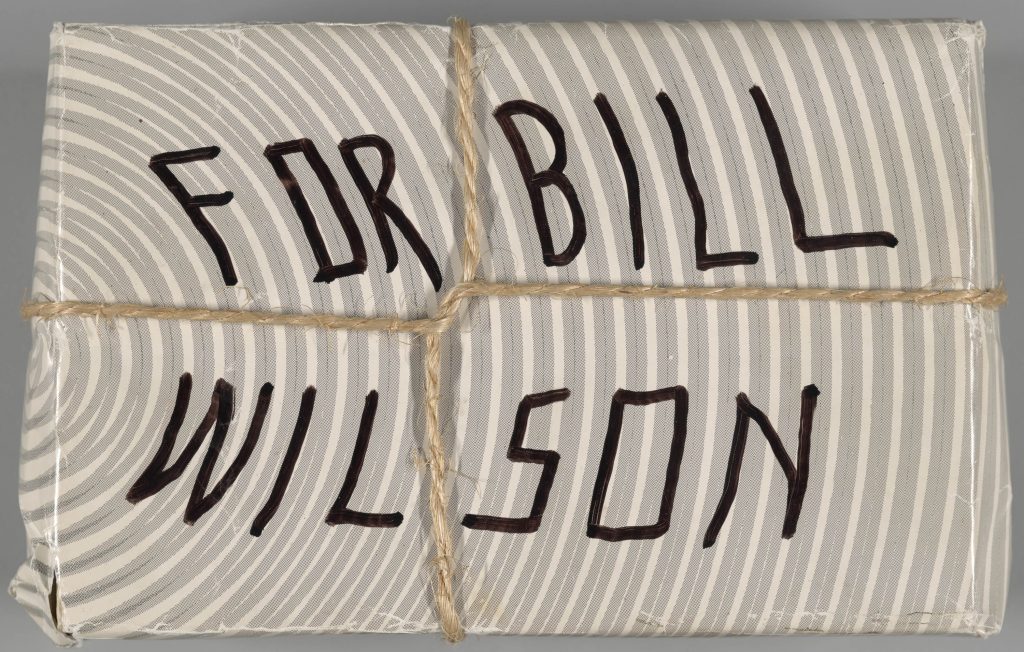 Johnson is best known for his popularization of mail art through the founding of the New York Correspondence School, which gained broader attention through a 1970 exhibition organized by Marcia Tucker at the Whitney Museum of American Art. However, outside of sporadic and often strained partnerships with museums and galleries, his output was characterized through his tendency to disavow and discard. In the context of the fifties and sixties—the decades best represented in Wilson’s archive—Johnson lampooned the gestural discharge of Abstract Expressionist painters and avoided firm affinities with emerging movements such as Pop Art and looser networks of artistic practitioners working within and around the auspices of Happenings and Fluxus. Labeled as a “master of the throwaway gesture,” a “flop artist” and a “name-dropper,” seemingly everything Johnson touched turned to trash and yet Wilson was there to recover it.

“Ray Johnson c/o” opens with a presentation of Wilson’s original three-ring binders, brimming with plastic sleeves that he used for cataloguing and storing printed matter mailed to him by Johnson. Arranged in chronological order and spanning from Johnson’s birth in 1927 to his death in 1995, the binders situate the exhibition within the haptic space of the archive. While this installation is not interactive, several of the binders are opened for display and visitors are invited to flip through scans of binders on the Art Institute’s website. Wilson’s archival methodology carries over to the caption convention applied to artworks and other materials in the collection—when appropriate, his chronological cataloguing system, or the “WSW number,” is used alongside Art Institute of Chicago accession or object numbers. 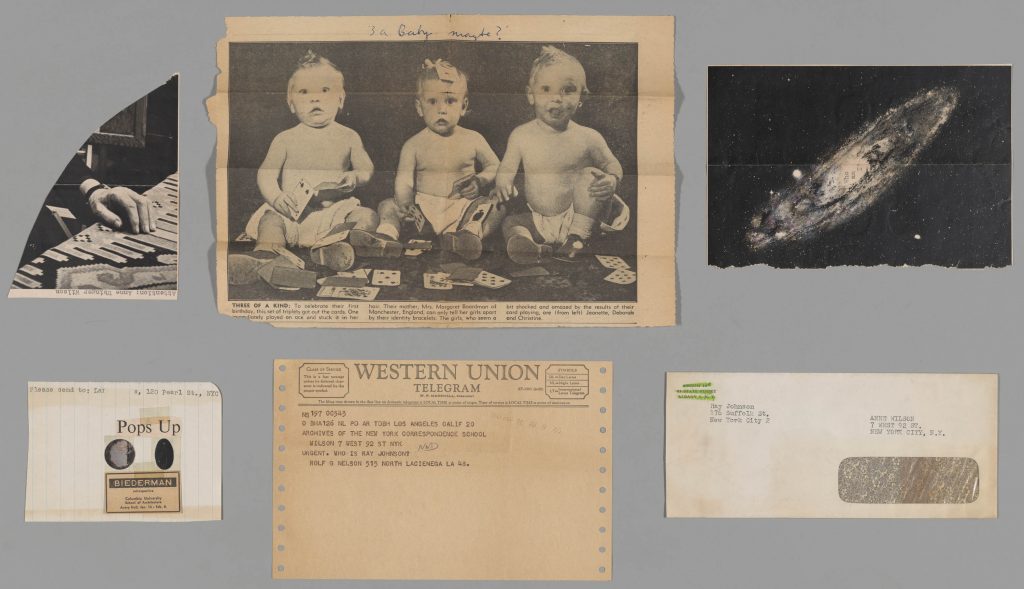 In generating a situation where the visitor comes to understand the ways in which Wilson looked after Johnson’s work, the curators also underscore the ways in which care is not neutral. Despite their close friendship and collaboration, Johnson and Wilson could be at odds with one another, particularly when it came to questions of display. Johnson assiduously oversaw the installation of his artwork and sometimes provided annotations to mailings he sent to Wilson, which instructed how materials should be kept or displayed in relation to one another. However, as Haskell notes in her introduction to the catalogue, Wilson’s decision to display materials on the wall or in frames were not always in keeping with Johnson’s desires. 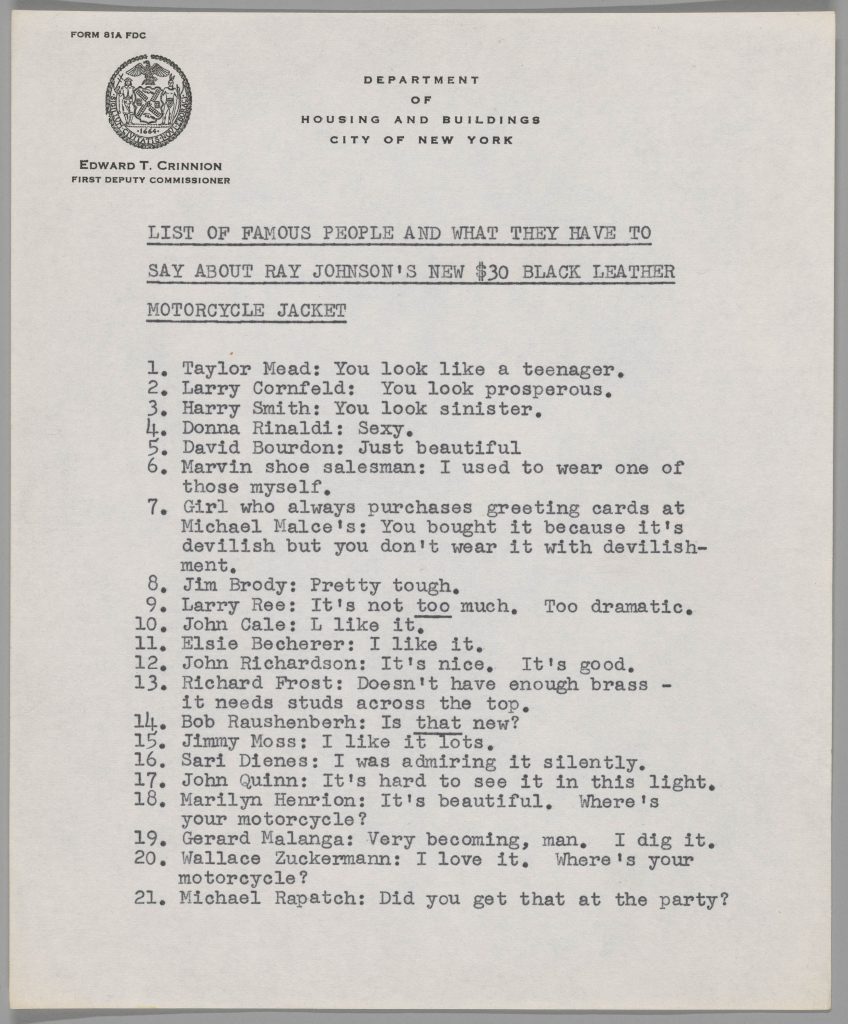 In an exceptional effort to reaffirm original artist intent, a central gallery contains a vitrine of Johnson’s early collages or “moticos” displayed in the round. Johnson’s moticos are like collaged characters—their silhouettes reminiscent of figures, icons or unidentifiable scripts for a classified vernacular. Layering chopped-up, defaced, drawn- and painted-over scraps of colored paper, images and text, these collages were visually equivalent to the kind of wordplay and pastiche embodied in Johnson’s epistolary endeavors. In “Ray Johnson c/o,” over forty collages that would ordinarily be framed and hung on the wall are instead mounted in a vitrine and presented, in Haskell’s words, as “discrete sculptural objects,” such that both the fronts and backs are visible; this animated presentation of Johnson’s moticos recalls how they would have been used and circulated by Johnson in the 1950s. In another gallery, the curators deliberately display his collages alongside the original envelopes that served as the vessels for their delivery to Wilson, thus simultaneously blurring and sharpening the distinctions between art and non-art that preoccupied Johnson through his career. By providing innovative curatorial presentations and scholarship, Haskell and Carter assert that care is not static, but rather responsive and evolving.

Following Johnson’s death and sympathetic to his expressed wish to be taken seriously over thirty years earlier, artist and writer Dick Higgins wrote in “Print Collector’s Newsletter”: “The important thing is that the work not be lost, that it and the message go out into the world, somehow, via a sympathetic gallery or a museum show or whatever. He made the paradigm, and it is up to us to make it our own.” Prescient of the value of these messages since his initial correspondence with Johnson in 1956, Wilson worked dutifully for decades to ensure that the life and labors of his friend would go out into the world. Now, in the ongoing research, presentation and stewardship of this acquisition, the Art Institute has adopted both Johnson and Wilson’s practices into its own paradigms. Sent, received, unpacked, catalogued, puzzled over, deciphered and made new once more, Johnson’s little baby seeds continue to circulate—their indeterminacy invites ever-dynamic meanings hatched from sweet nothings.