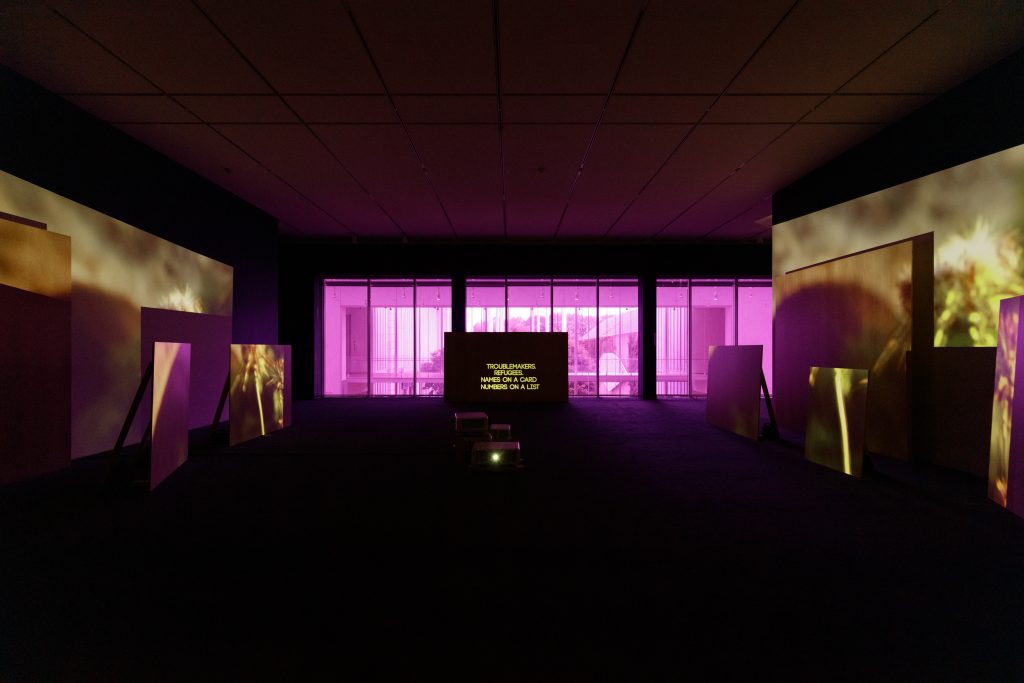 Installation view of “If only this mountain between us could be ground to dust,” 2021/Image: Courtesy Art Institute of Chicago

Making your way past the Modern Wing lobby, up to the second floor, and through the design galleries, you’ll hear Basel Abbas and Ruanne Abou-Rahme’s exhibition, “If only this mountain between us could be ground to dust,” pulsing through the air before you see it. Curated by Maite Borjabad López-Pastor, it is the first exhibition of Abbas and Abou-Rahme’s work at a major museum in the United States, and one of (if not the) first of any Palestinian artist. Based in Ramallah and New York, Abbas and Abou-Rahme’s collaborative practice is grounded in sampling. They make use of existing and self-authored writings, video footage, objects and sound recordings to craft new imaginaries that counter set narratives and representations that circumscribe Palestinian life.


The core of the exhibition is two three-channel video installations: “Oh shining star testify” (2019–21) and “At those terrifying frontiers where the existence and disappearance of people fade into each other” (2019–21). “Oh shining star testify” centers the story of Yusuf Shawamreh, a fourteen-year-old boy killed by Israeli forces in 2014 while foraging on his family’s annexed land in the West Bank. Using images of native Palestinian plants and found footage paired with the artists’ own song recording, the work layers image and sound over and around Israeli military surveillance footage released after Shawamreh was killed.

“At those terrifying frontiers,” in turn, takes its title and text from Edward Said’s “After the Last Sky,” the Palestinian scholar’s poetic meditation on Palestinian life, especially the conditions of exile and displacement. Lines from the book intersect with composite avatars created by Abbas and Abou-Rahme from images of Palestinian protestors at the Great March of Return, weekly protests for the right of return for Palestinian refugees that began in Gaza in 2018. While the avatars create a virtual meeting space for the artists and the protestors, kept separate by the geography of occupation, places where the rendering software encountered incomplete visual data appear as scars or fissures on the avatars, pointing to the potential violence of algorithmic visibility. 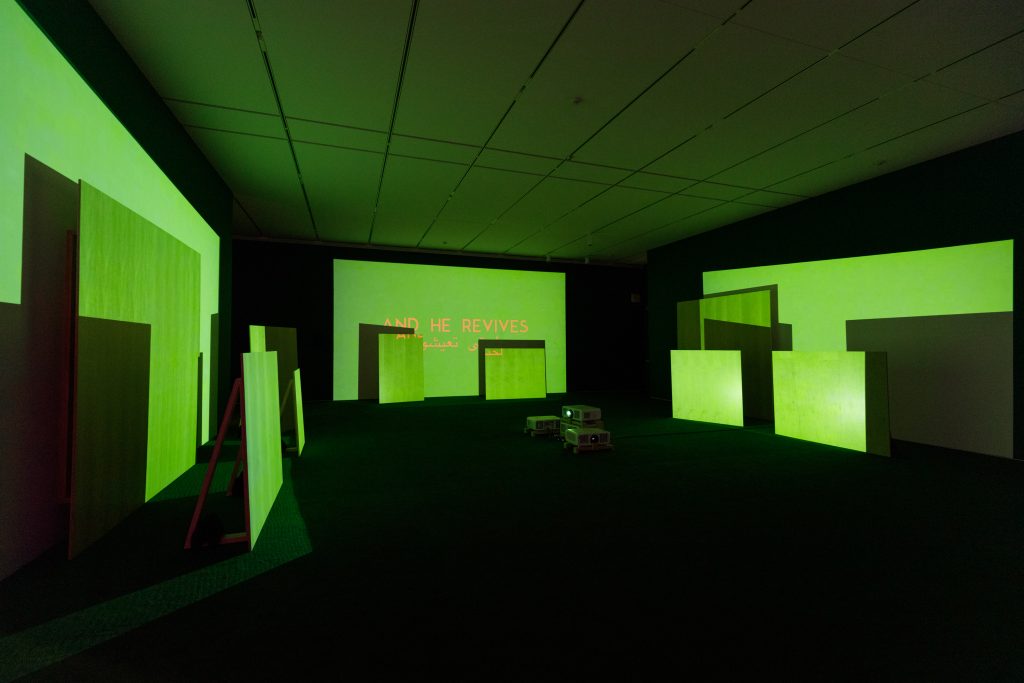 Installation view of “If only this mountain between us could be ground to dust,” 2021/Image: Art Institute of Chicago.

The works are projected onto all four walls of the gallery space, three of which are interrupted by standing plywood sheets of various sizes that break up the projected image, and the projections on each wall frequently diverge from one another as they show different channels. The installation choice here adds another layer of depth and fracture to the already layered video works. This presentation obligates viewers to let go of fully capturing each work as a whole and instead take in an experience of fragmentation.

Before we enter the video space our understating of the politics of presentation at play is framed by a textual installation that joins a print series titled “Don’t read poetics into these lines” (2010-21), with a work commissioned by the Art Institute, “Once an artist, now just a tool” (2021). “Don’t read poetics into these lines” is drawn from the artists’ collected archive of tweets responding to Arab revolutions, which they selectively erase into new poetic forms. Lifted from these fragmented tweets, the vinyl text of “Once an artist, now just a tool” addresses the violent conditions that shape Euro-American museums and underscore Abbas and Abou-Rahme’s display within them. With its direct address, “Once an artist, now just a tool” heightens the auto/institutional critique threaded through Barbara Kruger’s work and Hito Steyerl’s “Is the Museum a Battlefield?” in the nearby galleries.

Overall, the exhibition challenges viewers to dwell in the conditions of disjuncture that pervade Palestinian life under occupation and displacement, and dares to assert that these works, formed from fractured parts, can operate in excess of dominant histories and mainstream narratives that facilitate Palestinian erasure. Crucially, the works presented are themselves perpetually incomplete and in process; as part of Abbad and Abou-Rahme’s practice, these works will continue to shift and grow well after they leave the galleries of the Art Institute. (Sarah Dwider)

“If only this mountain between us could be ground to dust,” Art Institute of Chicago, 111 South Michigan, through January 3, 2022.