Melissa Potter has always preferred making art in community spaces rather than in a traditional studio. It forces her to consider the implications of private land ownership; working communally and collaboratively also allows her to engage others in her practice. An interdisciplinary artist who works in fiber arts and other craft processes, Potter also engages deeply in research, working with ethnographers to explore the history of craft and social customs. Her propensity to work collaboratively stems in part from her abiding interest in feminist and social practices.

In the beginning of the pandemic, lockdown brought much of Potter’s work to a halt. She couldn’t access the papermaking studio at Columbia College, where she’s a professor, and two community gardens where she’d previously had projects had been lost to private development. 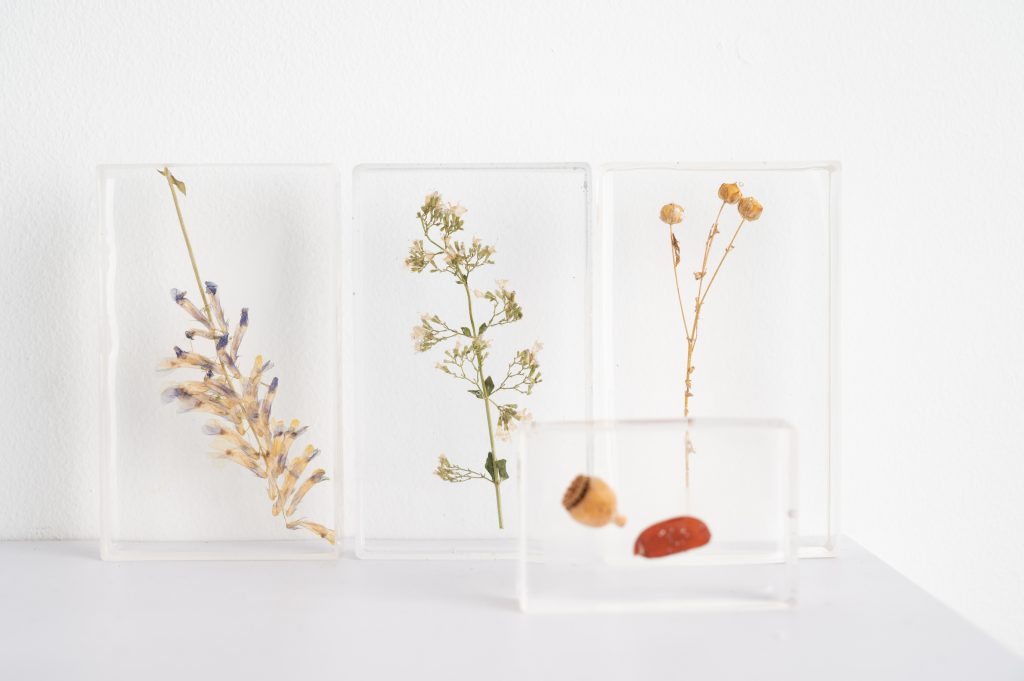 So in early 2021, when Susannah Papish invited Potter to do a project at Boundary, a converted garage turned contemporary art project space in Morgan Park, it was a perfect moment to delve back into what Potter describes as an itinerant practice. Potter proposed turning Papish’s front yard into a prairie restoration project. The title, “Invisible Labors: Prairie Carbon Sequestering and Papermaking,” is a nod to both the groundbreaking work of feminist scholar Silvia Federici and to the underground work that plants do in their root system, to sequester carbon.

Over the summer and fall of 2021, Potter planted both seeds and live plants, such as milkweed and cornflower, at Boundary. The project makes multiple connections to the threat of climate change. Some scientists consider grasslands to be one of the most threatened ecosystems on the planet. According to the U.S. Geological Survey, central North America has lost about seventy-nine percent of grasslands since the early 1800s. Grasslands, which were once abundant in Illinois, are reliable carbon sinks, which is beneficial for soil health and for air quality. Potter’s planting of milkweed is also beneficial for monarch butterflies, which are threatened by loss of habitat; the western monarch population has declined 99.9 percent since the 1980s.

The project will live on in the perennial plants, as well as in a forthcoming publication, “Invisible Labors: Reviving Histories of Women’s Land Work in Blue Island Ridge Communities, Chicago,” a collaboration between Potter, Papish and the Ridge Historical Society. The publication will consider the history of women from the area (originally Potawatomi territory) who worked the land—from seed savers to landscape artists. 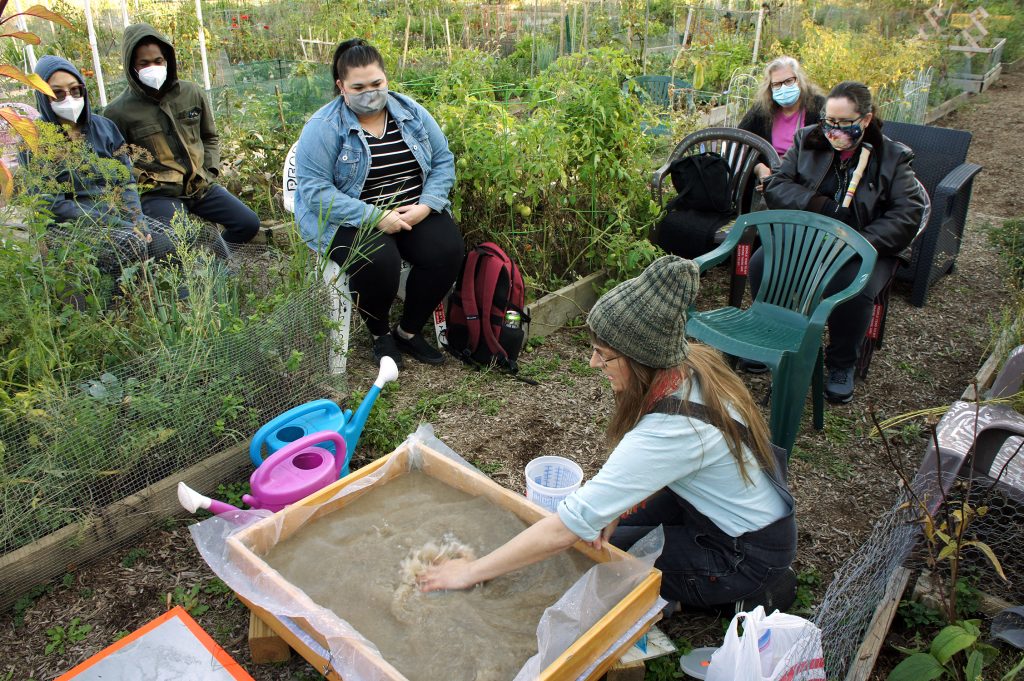 In 2021, Potter also worked on a collaborative project at Vedgewater Community Garden in Edgewater, as part of the Chicago Architecture Biennial. Potter planted flax in one of the garden’s community beds, and held public programming that looked at the plant’s uses for women’s health and its history as a textile. “I chose to focus on flax, because it’s a very interesting plant for hand papermaking, but it also has a huge social history behind it, part of which is divestment from cotton during slavery in the Americas,” Potter says. She will use the flax to make paper, which will then be spun or otherwise incorporated into an artwork.

Earlier in the pandemic Potter also completed a short film, “Marilyn’s Paper,” which looks at the legacy of Marilyn Sward, co-founder of the Center for Book & Paper at Columbia College. “I’ve been delving into the feminist histories of the hand papermaking movement, which of course is evident in all the work that I do, but it was interesting because I didn’t really know how deeply connected to the feminist movement she was,” Potter says. The film will be included in the exhibition “Uncovered Spaces,” which opens in March at the International Museum of Art & Science in McAllen, Texas. 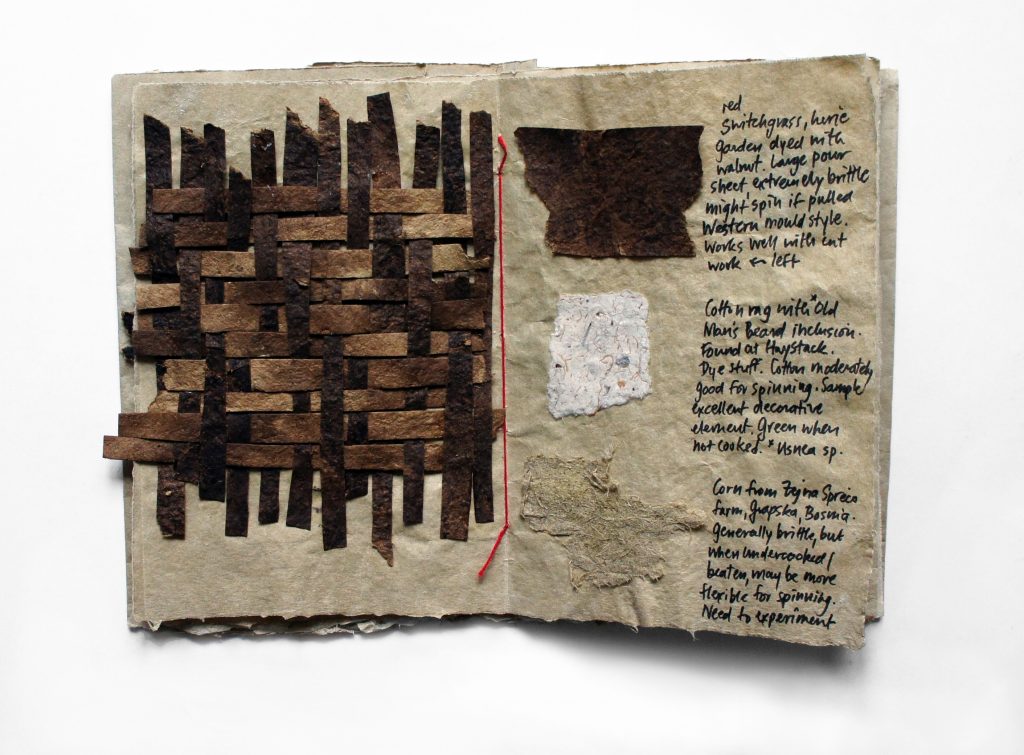 As a feminist artist, Potter is deeply interested in uncovering the histories of handicrafts, as well as the slow processes of growing and making her own materials. Making paper from her own harvested materials is a painstaking process: planting seeds, tending and harvesting plants, making the paper, then finally weaving it on a loom. She calls the process “seed to art.”

“Seeds are delicate. Some of them work, some of them don’t. They are a live form of watching climate change,” she says. “Even in the ten years that I’ve been doing this kind of prairie-based garden work, it has been breathtaking to watch the changes. Nothing is ever static.”

And while Potter is interested in the histories of craft, she is careful not to romanticize those practices. “It’s really dangerous to get romantic about old practices and I think that’s where craft kind of falls flat,” she says. “On the other hand, if you really look at the deep histories of women’s traditional culture, these things weren’t just practices of doing, they were deeply connected to social, spiritual and methodological necessities for their culture.” Still, for her, the work is continuously engaging. “When you’re working with old processes and ideas like this, you’re connecting to those spaces of loss, you’re connecting to ways to re-engage that—for me as an artist, it’s just been breathtakingly interesting.” (Kerry Cardoza)