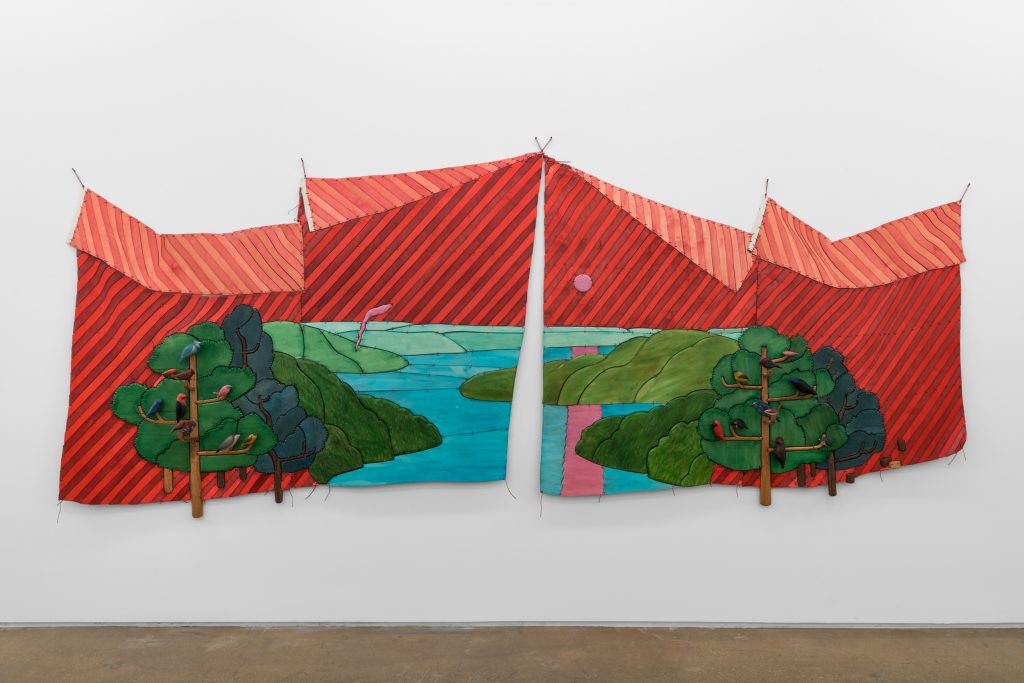 “When supper was over and the dishes dipped and wiped, the dark had come, and then the men squatted down to talk.
And they talked of the land behind them. I don’ know what it’s coming to, they said. The country’s spoilt.
It’ll come back though, on’y we won’t be there.”

The title of Dan Gunn’s current solo show is taken from this despairing passage in John Steinbeck’s “Grapes of Wrath,” the Depression-era novel about the unlucky Joad family. It’s an appropriate reference for this macabre and breathtaking body of work. An extreme exercise in scale, the exhibition features two monumental assemblages (incidentally the oldest and newest works included) as well as several smaller, wildly intricate wall hangings.

In describing his practice, Gunn reveals a complicated relationship with labor and craft discourse. He is hesitant to use terms that fetishize or romanticize labor for labor’s sake; he sees time-consuming processes such as woodworking, chair caning and hand building as a means to an aesthetic end. Gunn is reverential, both toward mythologies of craft tradition in his own family, and the legacy of folk artists, woodworkers and artisans he has learned from. Despite their deadpan humor, there is such sincerity and tenderness to these objects. Says Gunn: “My tongue is a little in my cheek, but I am so in love with what I am doing.”

Welcoming you into the gallery is the first of two grand bricolage sculptures: “Patchwork Plateau” (2011). This kinetic work can function as a screen or table. In this iteration, it is partially accordioned out and each embedded panel acts as a wunderkammer of exotic objects on display. Gunn’s technical virtuosity in a variety of materials is apparent here, in what he considers his first “mature” work. It is one of many in the show that feel elegiac. 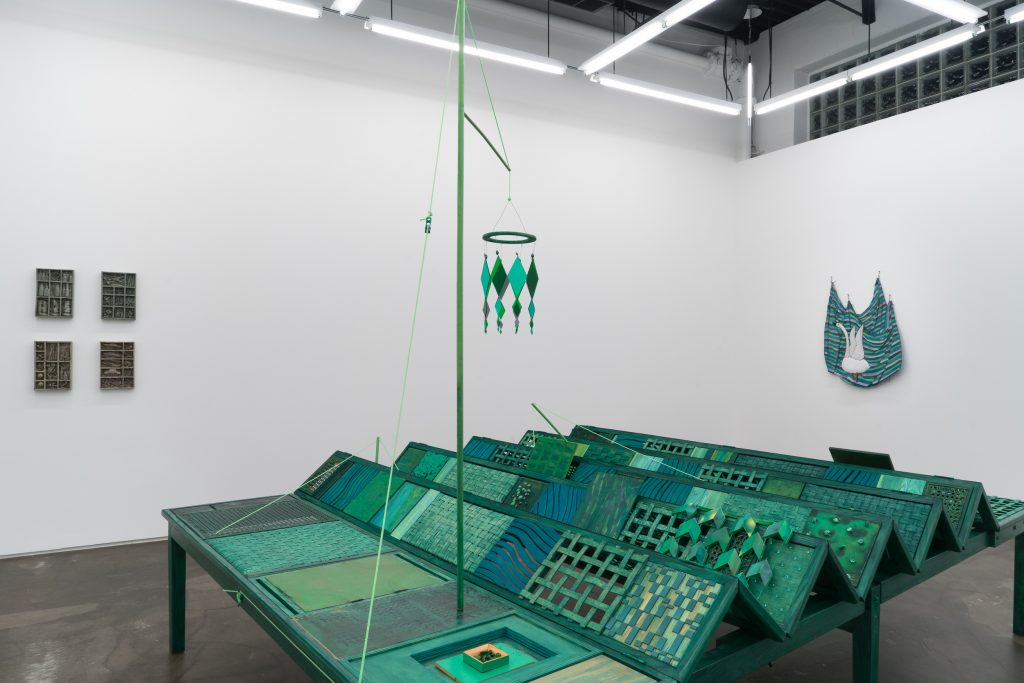 I was equally seduced by the charming smaller wooden tapestries that adorn the walls around “Patchwork Plateau”: a fastidious presentation featuring curious juxtapositions of materials and methods. (The photos are misleading and cannot adequately convey the subtle dimensionality of these hard quilts—see this show in person if you can.) Gunn uses a traditional still-life draped fabric to sketch out the background for his subjects; here is a swan with the most delicate little legs, and a rocking horse that elicits pangs of youthful nostalgia. There is a precarity to these mesmerizing sculptures in relief. The puzzle pieces are held together with a playful cord that adds a cheeky contemporaneity. If the cord was cut, all the pieces would clatter to the ground. I held my breath in front of the “Suitcase Acts” series: four tiny, monochromatic displays of ceramic casts in ceramic letterpress-drawer-like boxes.

The theatrical inner room of the gallery is charged with foreboding grandiosity. In the commanding “Paradise Scenery” (2022), birds sing the dawn chorus in front of a fire-red sky. With this gem of an assemblage, Gunn has leveled up from set-dressing to world-building. It is worth mentioning that the landscape rendered here bears more than a passing resemblance to the original cover of the “Grapes of Wrath.” The dystopian paint-by-numbers patchwork puzzle also evokes “The Garden of Earthly Delights,” and similarly left me wondering if the play we find ourselves in is a comedy or a tragedy. On the ground to the left of this marshy backdrop is the exhibition’s singular, light-up toad sculpture, named “The Ungrateful Son,” after the Grimm’s allegory for spite wherein a chicken dinner turns into a toad. To quote Steinbeck once more, it has become Gunn’s signature to “build up laughter out of inadequate materials.” (Erin Toale)

“Dan Gunn: of the land behind them” is on view at Monique Meloche Gallery, 451 North Paulina, through February 19.