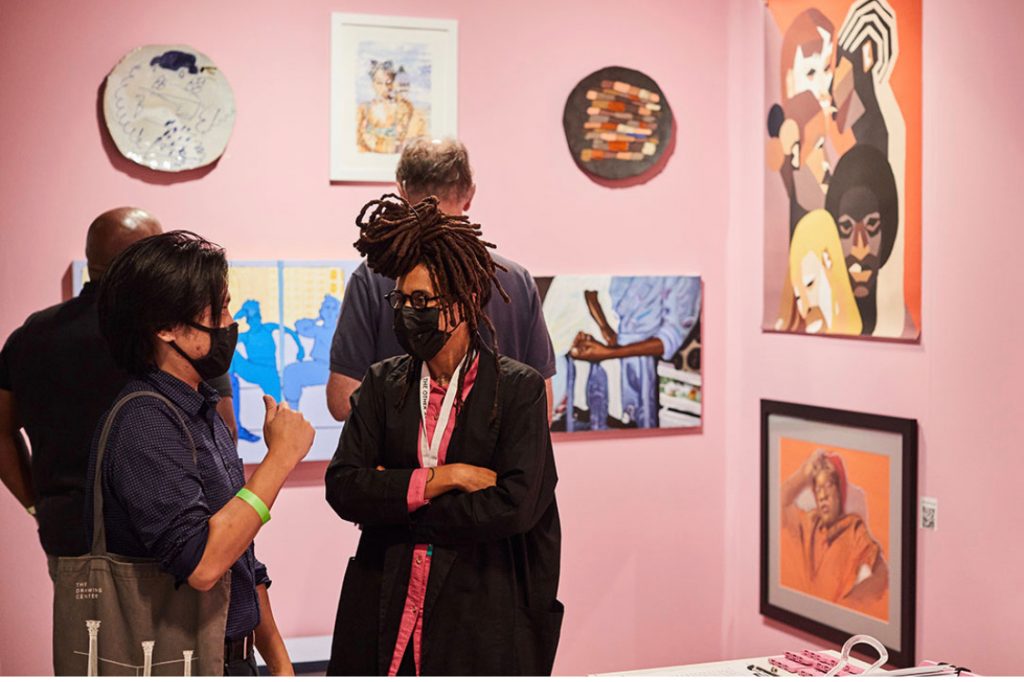 AMFM Booth at The Other Art Fair/Photo: courtesy of Saatchi Art, 2021

“We entered the art market to fill a void of too few platforms in Chicago that showcased multicultural artists,” say Andre and Frances Guichard, co-owners of Gallery Guichard in Bronzeville. “Our niche is art of the African diaspora.”

Only half of Chicago’s arts and culture organizations, on average, have at least twenty-five percent of staff that identify as BIPOC, according to a 2020 report conducted by Enrich Chicago in partnership with the Social Impact Research Center of the Heartland Alliance. The report, “A Portrait of Inequity,” was released one month before the murders of George Floyd and Breonna Taylor set the stage for a nationwide demand for increased racial equity. Although major cultural institutions, businesses and organizations have made renewed commitments to supporting arts organizations led by BIPOC leaders since 2020, Black-owned art galleries and collections have long played a central role in diversifying the art market and acquiring artwork of artists from underrepresented racial and ethnic backgrounds.

From well-known African American collectors such as Patric McCoy, co-founder of Diasporal Rhythms in Bronzeville, to the archival collection of conceptual artist Theaster Gates at the Rebuild Foundation in Grand Crossing, Black gallerists and collectors have not only helped launch artists’ careers but have also worked to preserve the legacy of African American artists and communities for future generations, before the expansion of corporate and academic efforts toward diversity, equity and inclusion in 2020.

High-profile galleries and arts organizations with majority staff of color thus function as a unique part of the arts and culture ecosystem in our city, and are still on the rise. We sat down with established Black art professionals, curators and gallerists from five galleries across Chicago that have been working to bring equity to the greater art world. 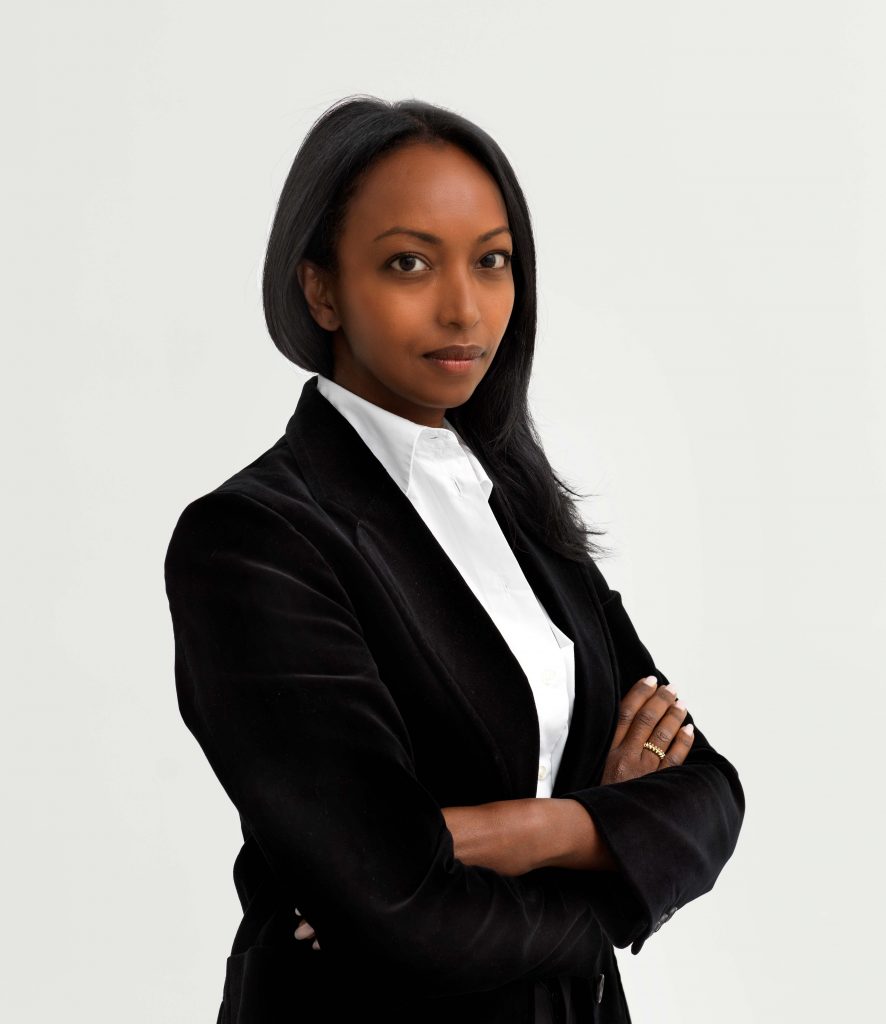 Mariane Ibrahim has emerged as a leading contemporary gallery in Chicago’s West Town neighborhood. Ibrahim, a Somali-French collector and art dealer, has become known for her strong focus on representing in-demand artists from the continent of Africa since opening her first gallery in Seattle in 2012. In 2019, she relocated her business to Chicago. Ibrahim built her reputation by representing an impressive roster of groundbreaking Black artists, including Amoako Boafo, Ayana V. Jackson and Jerrell Gibbs. Her global approach to diversifying the art market aims to bring cultures together by demonstrating the link between African art and the international art scene, asserting a contemporary perspective of what it means to be of African descent in the twenty-first century. On the heels of being named to Art Review’s “Power 100” list for 2021 and curating award-winning booths at art fair circuits like the Armory Show, among other accolades, she made the decision to expand globally to France in 2021, opening a second gallery in Paris. 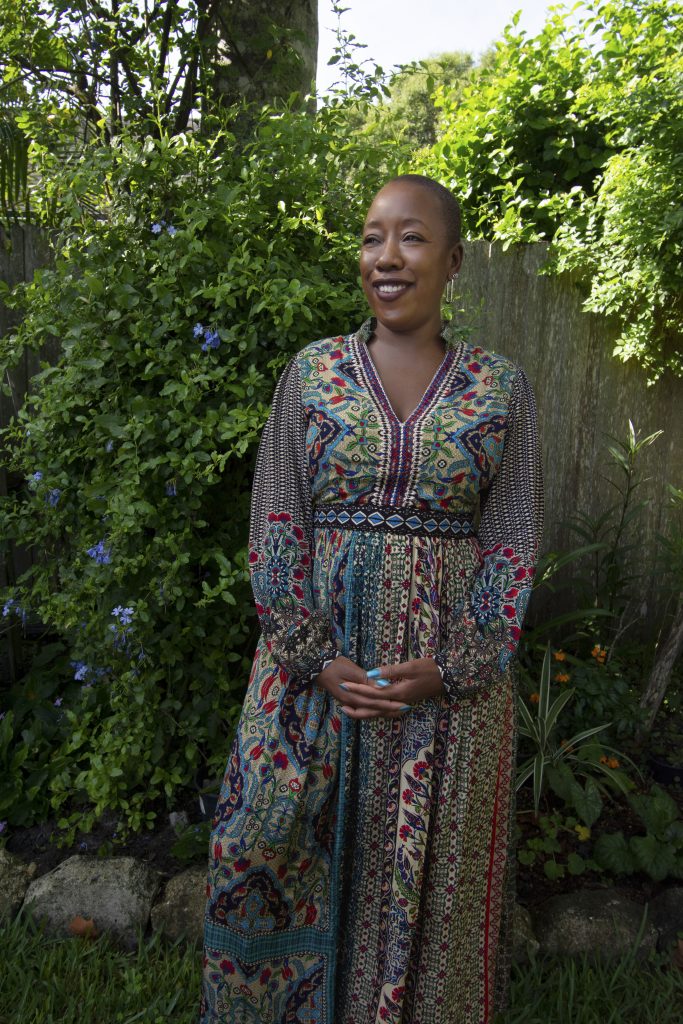 Threewalls, a contemporary arts nonprofit, was founded in 2003 to provide support and visibility for the visual arts community in Chicago. In 2016, the organization became a Black-led nonprofit organization when it hired Jeffreen Hayes as its executive director. In 2016, Threewalls shifted its business model from a traditional gallery to an itinerant model, making artists and collaborative projects outside of traditional art spaces a priority, in an effort to break down the elitism prevalent in institutional spaces.

“While we understand the market to be a defining presence in the ecosystem, we are committed to practicing equity: offering opportunities to those who are not engaged with the market and those who are often overlooked for household names,” Hayes says. “In Chicago, we tend to see the same few artists receive awards, exhibitions, residencies and other professional development opportunities as if no other artists in our community are deserving. If Threewalls were to follow the traditional art market, we would be continuing a practice of inequity among an already historically excluded group of artists.”

Today, Threewalls defines itself as a place that values racial inclusivity, artmaking, the creative process, intellectual and physical accessibility, and community. “Since May 2020, I have learned that more folks want authentic relationships with their community, as broad as that term is, and that art is an important avenue to these relationships,” Hayes says. “I believe this is the result of not only the murder of George Floyd and the way it shook most of us to our core but also the coronavirus pandemic. We realized that we are all we have, and we must care for one another.” In line with its value of collaboration and inclusivity, Threewalls recently expanded to welcome two new co-directors of programs, Adia Sykes and Lasondra Kern, who share individual and collective responsibility of overseeing the organization’s programs and fellowship initiatives. When asked what’s on the horizon, Hayes says, “What once was a surface-level attempt at diversity and inclusion through diversity initiatives is now racial justice mandates institution-wide and constant work to practice the depth of racial justice in grantmaking. Black artists are receiving more art historical treatment, in a move to course-correct history and to align with market demand.” 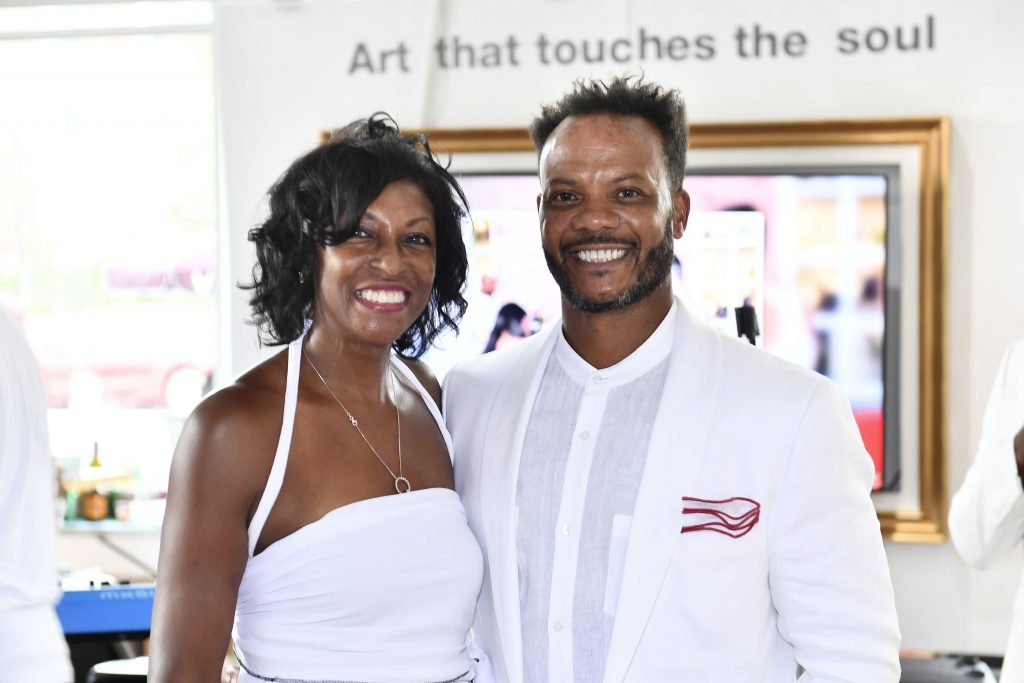 Founded in 2006, the mission of Gallery Guichard is to create platforms for multicultural artists and collectors to meet, while specializing in the art of the African diaspora. With this goal in mind, owners and managing partners Andre and Frances Guichard, in collaboration with Stephen Mitchell, opened their first location in the historic Bronzeville community. “We knew the stories that made this area special and decided we should lift up those stories and build on a community that was living on sacred ground,” Andre and Frances Guichard say.

Through exhibitions, events and tours, Gallery Guichard has helped close a gap in the market by giving emerging, underrepresented talent and mid-career artists an opportunity to develop their artistic practice in partnership with collectors and arts professionals. 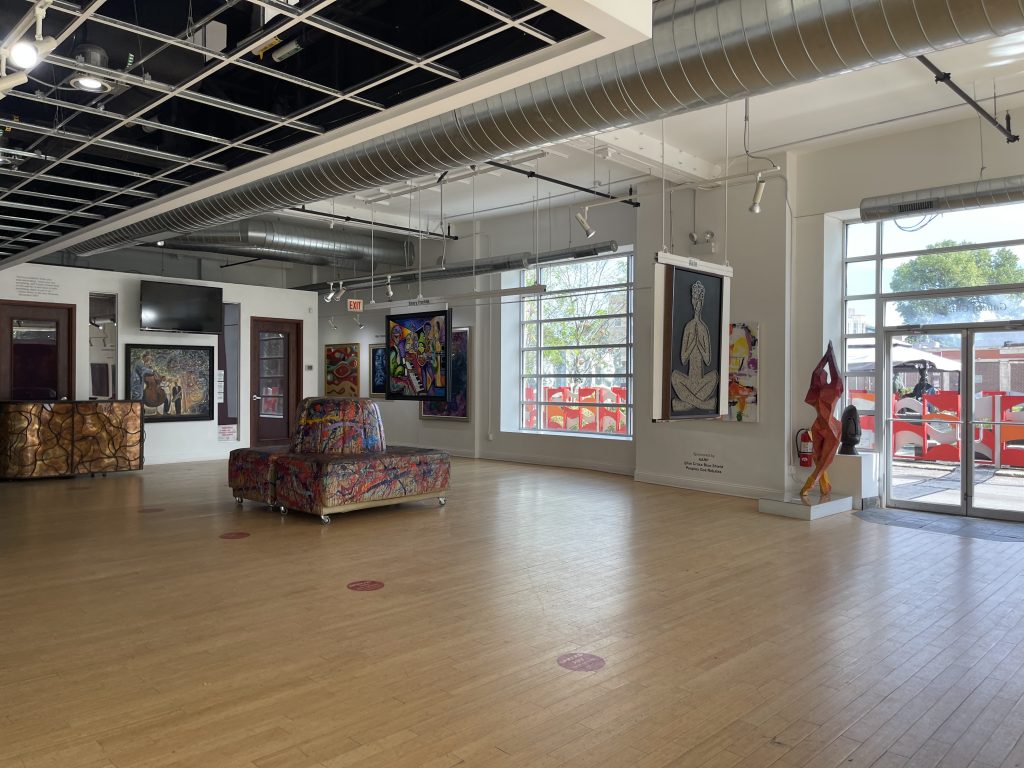 Following the protests in May 2020, Gallery Guichard experienced an increased demand in art of the African diaspora, from entities such as the University of Chicago, Peoples Gas, ComEd, Blue Cross Blue Shield, Sterling Bay to the Metropolitan Museum in New York City, which recently acquired artwork from Gallery Guichard. “The University of Chicago commissioned an artist we represent, Shawn Warren, as the first African American artist to complete an oil portrait in their Law Library, of Earl B. Dickerson. He was the first African American to receive his law degree a century ago in 1920,” Andre and Frances say. Dickerson also successfully argued before the U. S. Supreme Court in the Hansberry v. Lee case, which outlawed racially restrictive covenants in Woodlawn.

“Year after year we prove the power of diversity in curation. Our exhibits are always sold out and have the most creative fingerprints,” Andre and Frances say. 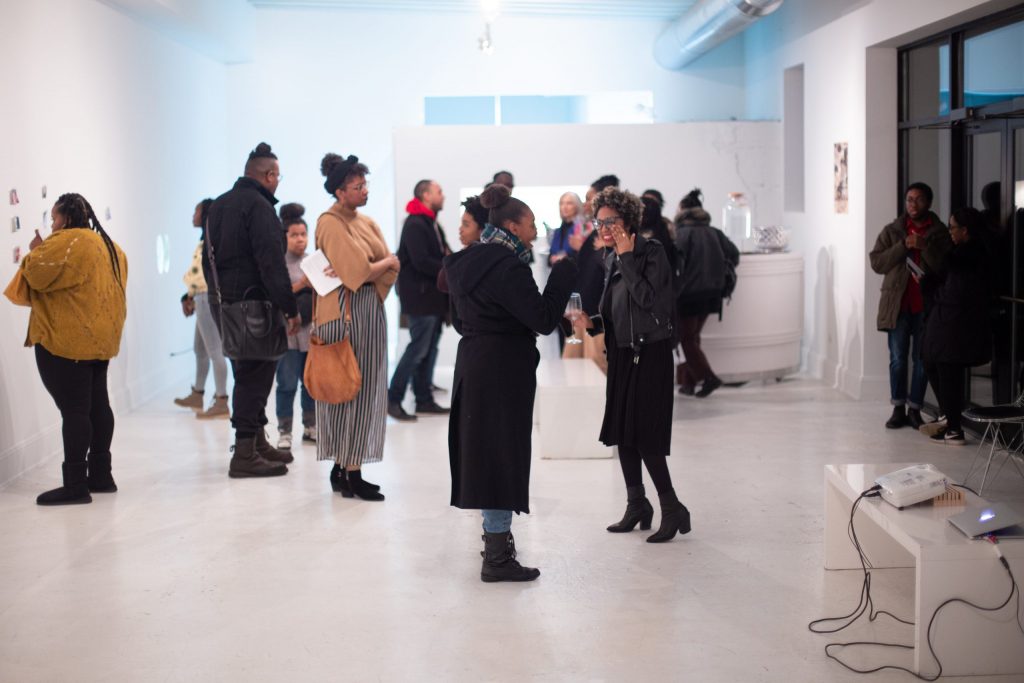 Blanc Gallery, opening, “Andrea Coleman: For Memory – These Are The Deities In My Eyes”

For the past twelve years, Blanc Gallery’s mission has been to engage African Americans and all Chicagoans through the arts and to ignite a dialogue on issues of spiritual, political and social significance. Founded by dynamic duo Cliff Rome and Eileen Rhodes, their main goal was to make art accessible to Black communities and to continue the legacy of creatives like Gwendolyn Brooks, Louis Armstrong, Quincy Jones and Nat “King” Cole, whose creative talents were born and cultivated in the artistic hub of Bronzeville. It is this rich artistic history that led Rome and Rhodes to open up their own gallery space there.

“I wanted the gallery to become the canvas,” Rome says. “We needed to have a space that became an intersection for beautiful works of art but it also needed to be accessible to the folks who live in the community and speak to the issues of the community.” 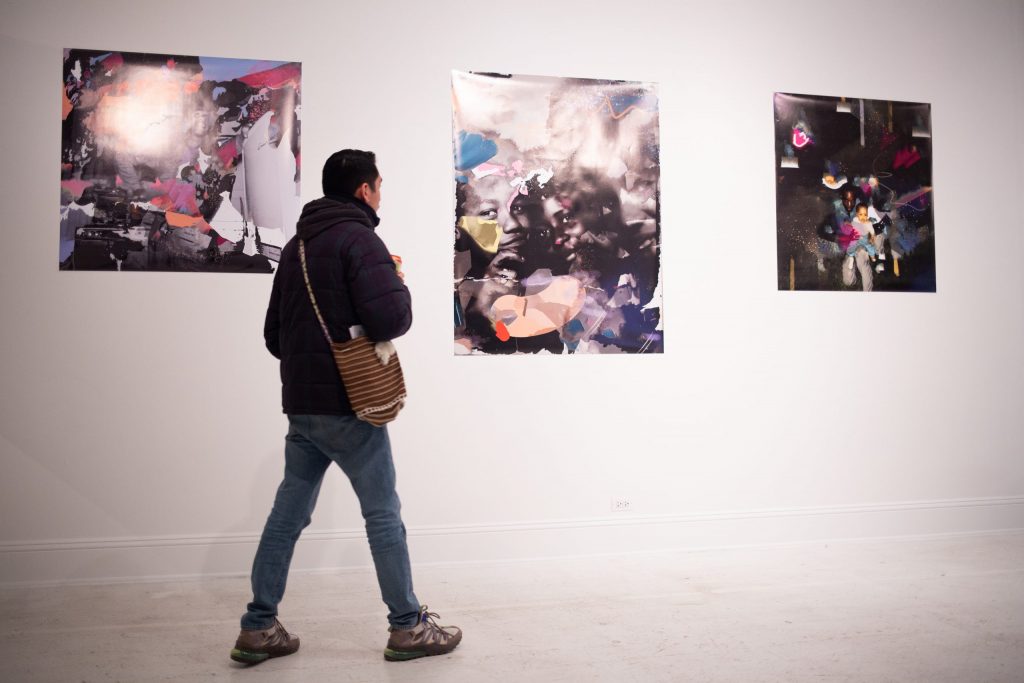 Blanc Gallery, opening, “Andrea Coleman: For Memory – These Are The Deities In My Eyes”

Often showcasing exhibitions focused on the spectrum of the Black experience, Blanc Gallery most recently produced “Our Tomorrow Happened Yesterday,” a solo exhibition of artist Raymond Thomas. All artwork on display was inspired by the last eighteen months of the coronavirus pandemic and is the fourth of an ongoing series funded by the city of Chicago’s Department of Cultural Affairs & Special Events.

“It has been an incredible journey for us and 2020 revealed more of the ugly truth about this country,” Rome says. “Our exhibits will provoke thought as they continue to push the narrative of the artist. The beauty of having a gallery is that we have the ability to display a body of work that is free of expectations or limits. Art has a way of making one pause, good or bad, regardless of the space it occupies.” 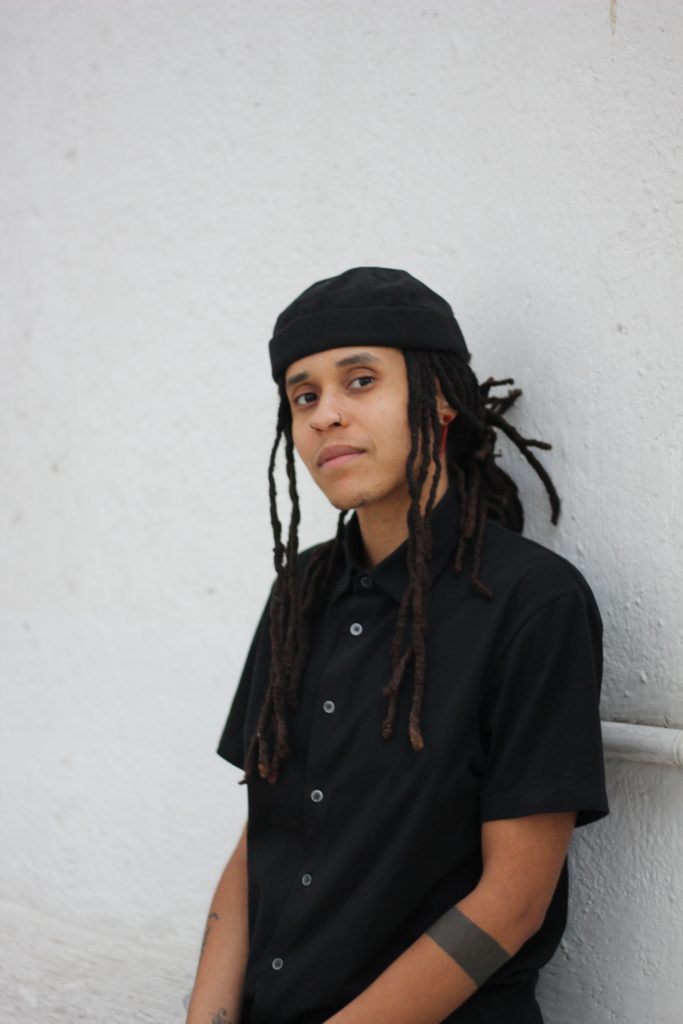 Ciera McKissick started AMFM as a web magazine in 2009 with the mission of putting a spotlight on emerging local artists, in response to mainstream media’s focus on well-known creatives who routinely showcased work at major art institutions. After a yearlong curatorial residency at Pilsen’s Chicago Art Department, the curator and cultural producer opened a physical space in 2016.

“As my work with AMFM grew, I wanted a space not only for me to house my work, but I wanted to create a hub for emerging artists, and host all kinds of interdisciplinary events and programs,” McKissick says. “I had a small storefront that also housed a gallery, resident artists, a small shop, music producers, writers and interns. There weren’t many spaces at the time that operated in that way. It was named best new gallery by the Chicago Reader in its first year, and we had such a great run for nearly two years.”

AMFM is unique in Chicago for its ability to evolve from various business models—from a magazine, to a physical gallery space, to its current iteration as an autonomous brand that hosts pop-up events, exhibitions and performances around the city. 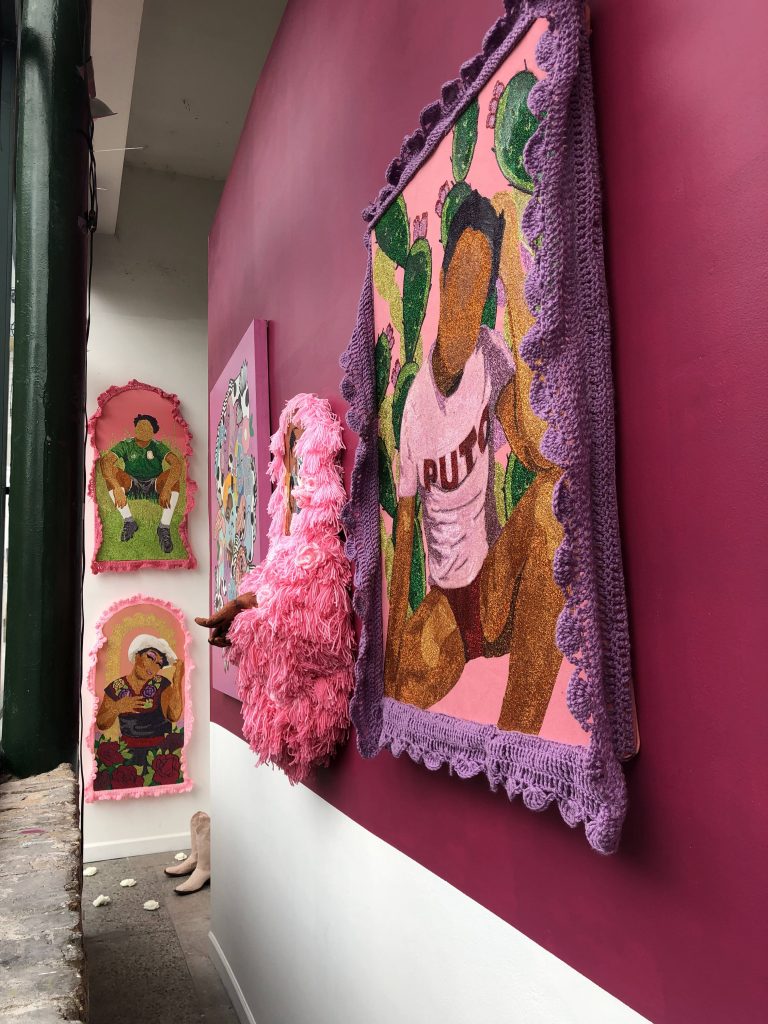 Installation shot from “Forget Me Not, Forgive Me Not” (Duo exhibition featuring the work of Caroline Liu and Moises Salazaar at Roots & Culture Contemporary, 2020

In 2021, AMFM produced a myriad of events, including an exhibition featuring Black art collectors at the Southside Community Art Center, an eighty-year-old Black institution started by Margaret Burroughs and a collective of Black artists in Chicago.

“Although the gallery is no longer a physical brick-and-mortar, the ethos of the gallery still remains,” McKissick says. “I hope to continue to see us challenge and disrupt these systems and institutions, and create and control our own spaces and narratives to diversify the market. There weren’t as many representations of Black artists, let alone Black people in the arts in general ten years ago…There are so many Black women working in the arts who are at the forefront, and having worked with so many Black artists, and being a Black gallerist myself, I am excited that Black art is finally being recognized, and that there is more distribution of resources, access and inclusion for the work and labor that we have been putting in all this time.” (Sabrina Greig)