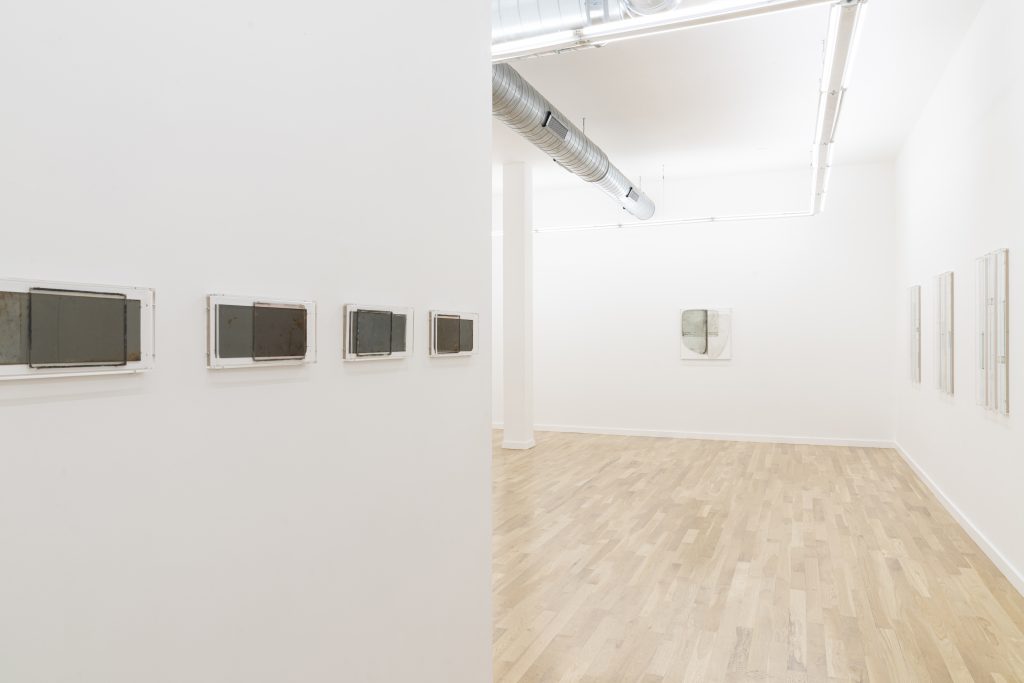 Upon entering Document, the minimal wall sculptures of Dutch artist Anneke Eussen appear pristine and meticulously made. A set of four identically shaped rectangular panels hang horizontally in the entryway, another wall displays three spare sets of plexiglass-framed panels, pale green and gray shapes showing through. But upon closer inspection, it’s clear that Eussen’s materials are recycled or salvaged; their surfaces disclose the marks of time, the presence of people long gone. Glass from a car window shows years of grime along its edges, a slab of marble is dotted with the impression of some other material’s pattern.

For this exhibition, the artist’s first in Chicago, Eussen sourced material from old cars and buildings; slabs of marble are from a renovation of the Berlin State Library. Eussen is interested in the human desire for recordkeeping, defining, measuring—the ways we create systems for organization and categorization. Materials once deemed useful or modern—such as the glass panes from post-war construction vehicles, which she likens to “samples of used time”—are given new life in Eussen’s carefully-made assemblages. The works are either mounted directly on the wall or housed in plexiglass panels.

In “Second Sequence,” eight car panes are layered in a slightly imperfect mirrored configuration, the mottled and striped stains varying the composition. In two marble sculptures, “Big Triumph 03” and “Little Triumph 02,” irregularly broken marble slabs are precariously suspended together on the wall with thin black rope. Eussen has used them to create new abstract shapes that are stunning in their simplicity. Freed from its own gravity, the marble is removed from its past lives as both functional interior and metamorphic rock. 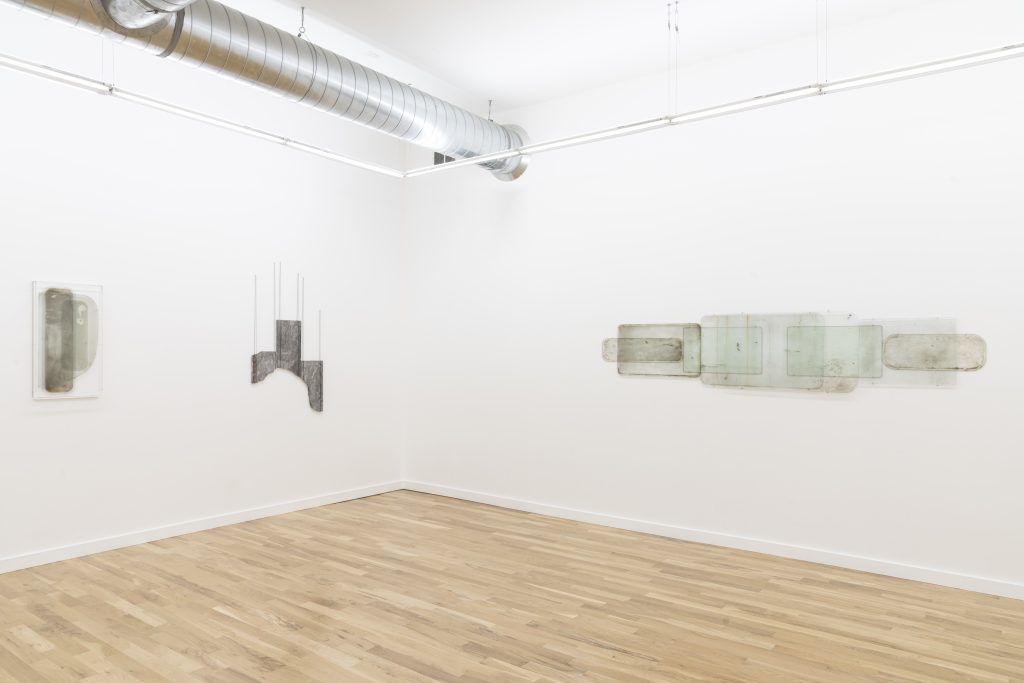 Document’s website notes that Eussen grew up in a town in the Netherlands that bordered Germany and Belgium, which prompted an interest in the “malleability of edges” and the absurdity of borders. By bringing to light the histories of these materials, Eussen asks us to consider how we decide what’s useful and what’s trash, how we delineate between what to save and what to discard. Eussen has found worthy detritus in abandoned factories, the materials themselves likely have thousands of years of life left in them.

Beyond the materiality of these works, Eussen is interested in the records of human life that these pieces contain: the auto workers who assembled these cars, the last people to touch these abandoned glass panes. The Berlin State Library was badly damaged in World War II, many thousands of items were lost or destroyed, many thousands more were transported elsewhere for safekeeping. How many iterations of Germany was this marble in service to? What patrons may have touched its surface? With Eussen’s intervention, these pieces have been given a new chapter, a new usefulness, and the viewer is given a new vantage point from which to consider the efficacy of our current systems of use, waste and keeping time. (Kerry Cardoza)

“Blank Pages: Anneke Eussen” is on view at Document, 1709 West Chicago, through February 26.