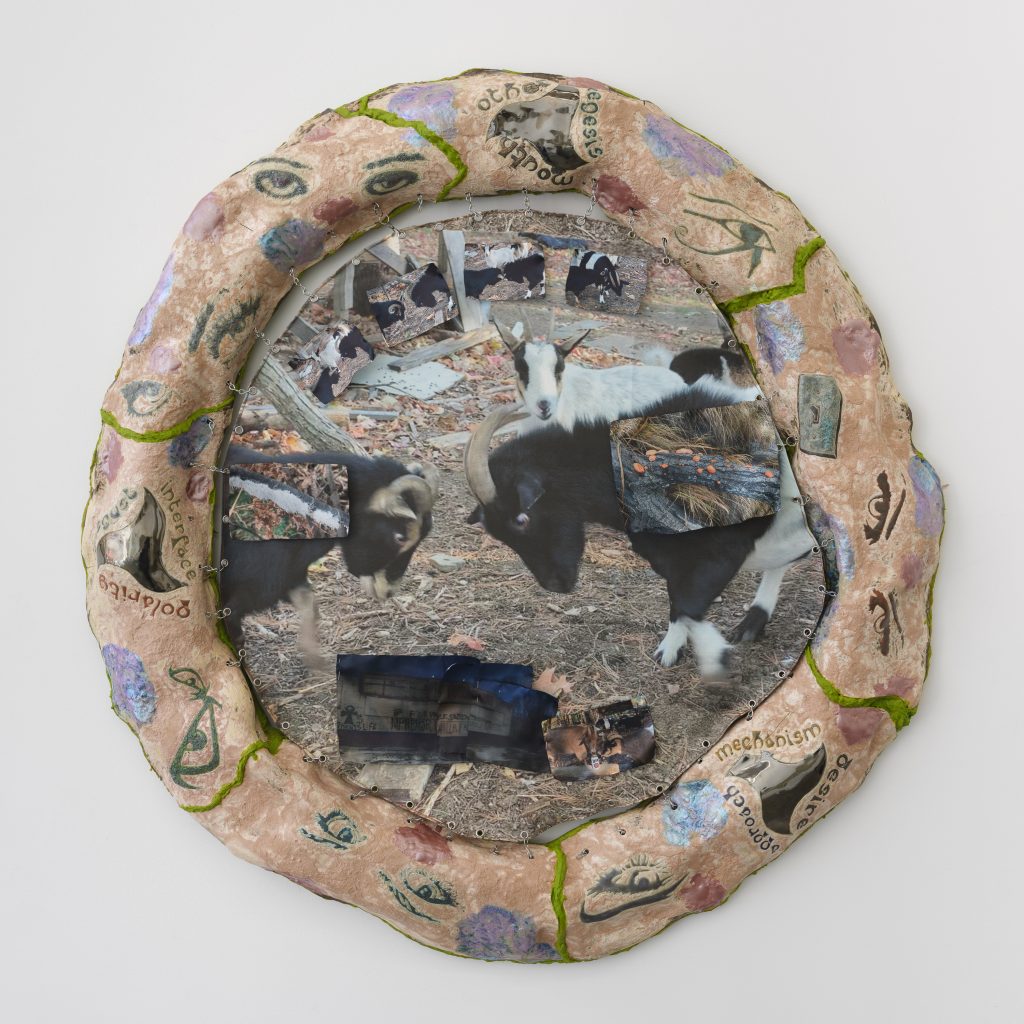 Manal Kara, “I thought more about what you were asking, and, like a fly, I landed,” ceramic, photographic prints on fabric, 2021

“Them” is a horn of plenty, an explosion of color, an irreverent mixing of mediums. The three-person exhibition, curated by Eric May, marks the fifteenth anniversary of Roots & Culture, a small but mighty cultural center in Noble Square. Featuring a cohesive body of works by Flor, Manal Kara and Caleb Yono, the exhibition is a stunning display of the magic that can happen when fixed ideas about art-making and identity are thrown out the window.

Vibrantly colored drawings by Caleb Yono are hung throughout the gallery, featuring otherworldly femme figures with long hair and painted, talon-like nails. All sport third eye chakras, suggesting an awareness of higher consciousness or heightened perception. These characters, with bright pink or neon yellow skin, are caught in moments of reflection. One holds a rose up to their nose, another reclines amid an orange background, flanked by flowers. They are almost psychedelic in composition, bursting with fluorescent colors and floral elements sometimes as big as the figures themselves. 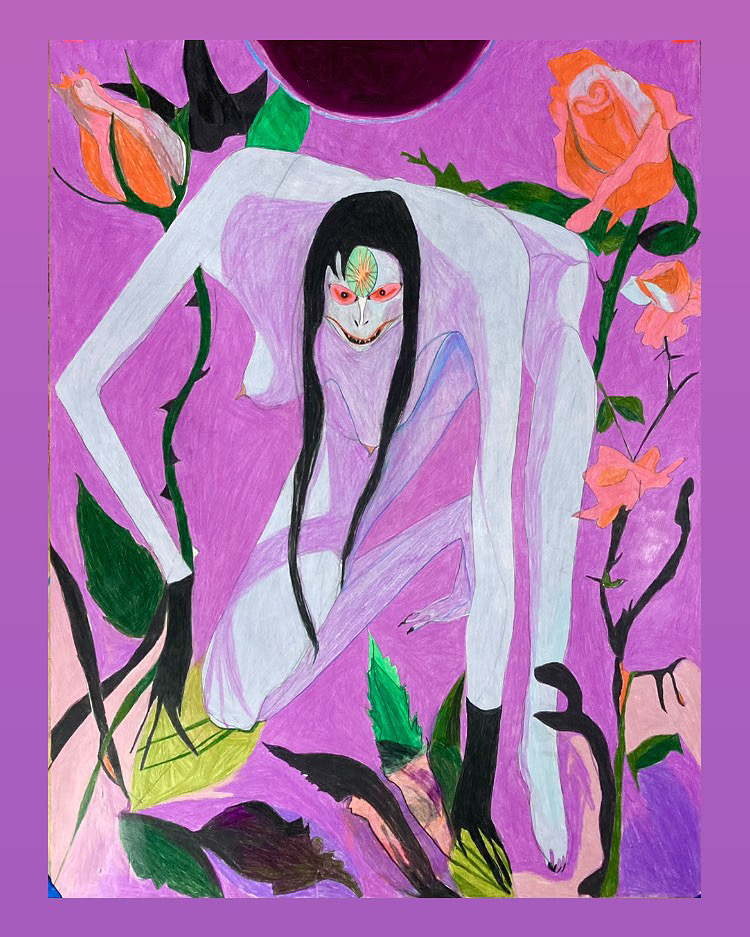 The centerpiece of the exhibition is one of Manal Kara’s loaded ceramic sculptures. Hung on the wall, the work is a marvel of material. A large ceramic ring is painted with disembodied eyes, green cracks and dabs of pastel color, embedded with three-pronged mirrored shapes that are bordered by cryptic words. Inside the ring a photograph printed on fabric of two goats going head-to-head is chained—perhaps a symbol of vitality? Stuck to the print are still more prints: images of fungus, graffiti, goats inspecting a can of beer. It’s almost like Internet chum, though Kara has said it takes inspiration from its natural surroundings; Kara lives in Gary, Indiana near the dunes. These images could also be seen to represent the similarities between the human and the non-human, such as the tendency of aggression in animals, as well as the blurring of neat divisions, like fungi that have multiple sexes, or the changing images of what gets reflected in a mirror. 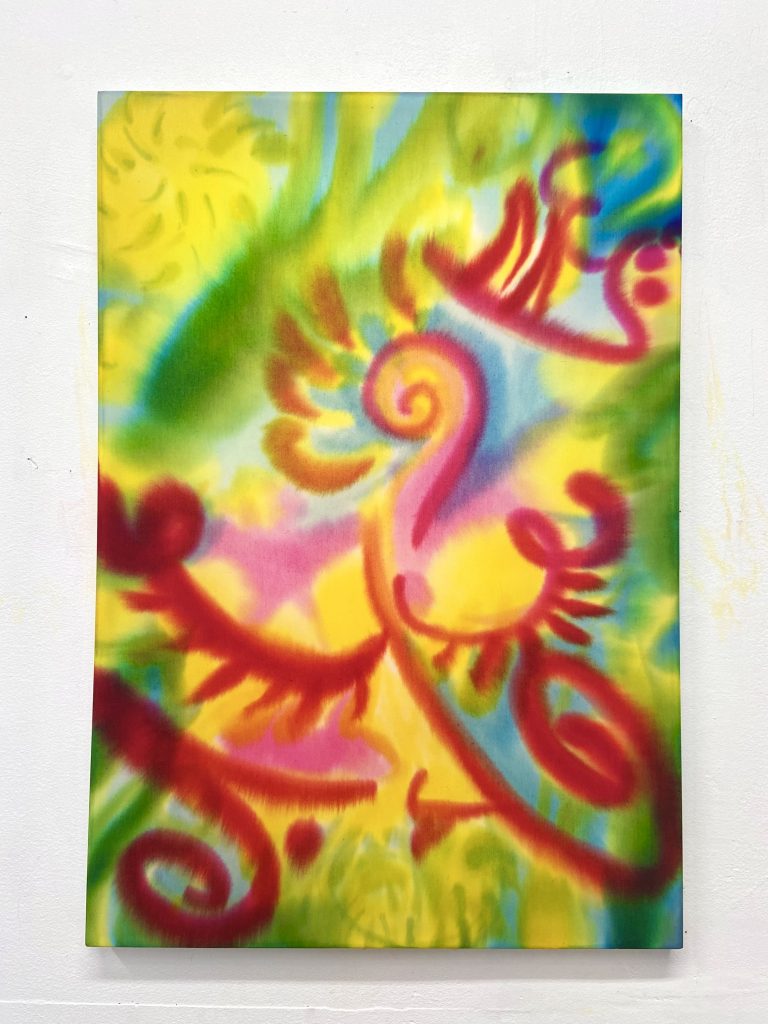 Like Flor, Kara also works in poetry; at the opening, the two artists gave a reading. The exhibition will also feature performances at the closing on March 5 by Flor and Yono. The live elements, ephemeral yet charged, are a fitting component to this work, made by artists intent on breaking rules, on defying an easy read. (Kerry Cardoza)