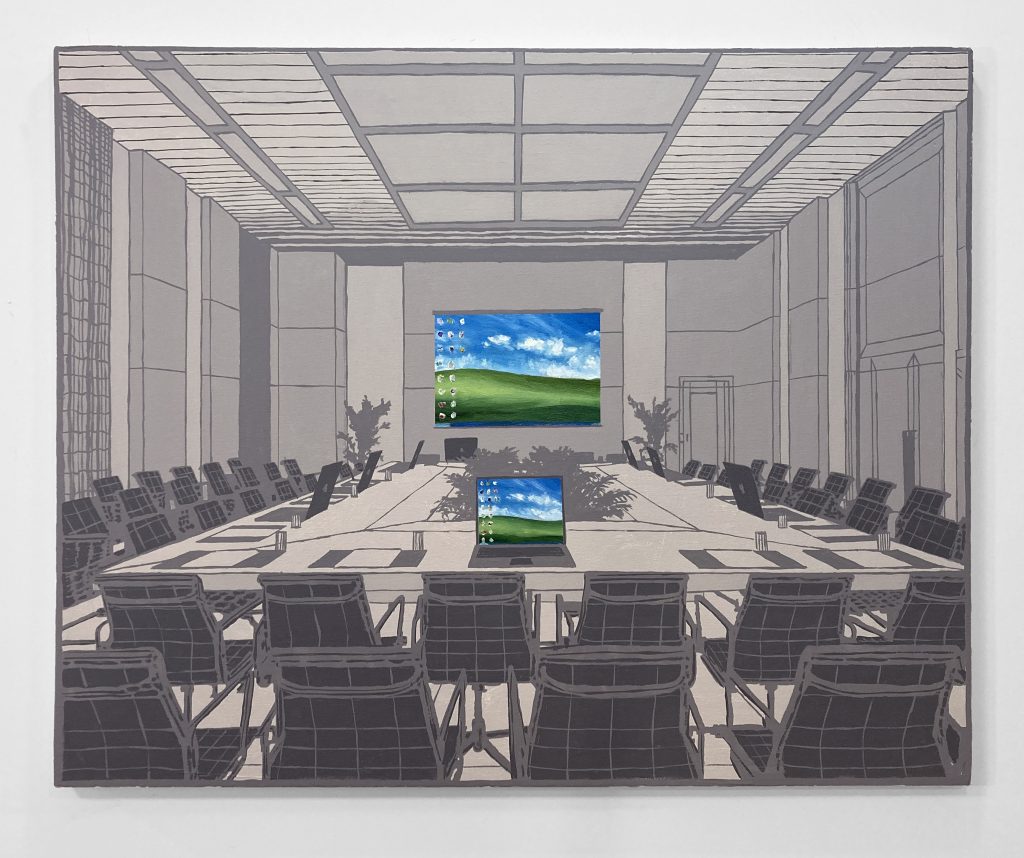 Is the world we live in via our phones and digital devices still a world?

I’m no philosopher, but artists are by nature philosophical, and painters create worlds within rectangles as a matter of course. “Hyper-Contemporary,” on view at Real Tinsel Gallery in Milwaukee, is a collaboration between the white cube gallery and storefront and the online Hasbrook Galleries. Sixteen artists from nine countries across four continents express “localized visions of the increasingly tangled fabric of space, time and self.”

This exhibition is mostly paintings and works on paper, often resembling the insider jokes of online communities and meme culture. At other times, they express the existential anxiety and ennui we feel after scrolling for too long in the living room while the sun is shining outside.

Bryant Girsch’s “Work Meeting” shows an empty, gray meeting room in single-point perspective, echoing Renaissance compositions. The scene is punctuated by a laptop bearing the wallpaper landscape, “Bliss,” used by Windows XP. “Bliss” is one of the most viewed photographs in the world, an archetype of the false sublime. In Girsch’s painting the photo is also cast on a wall-mounted monitor. Nature is doubled, our perceived pleasure expanding exponentially. 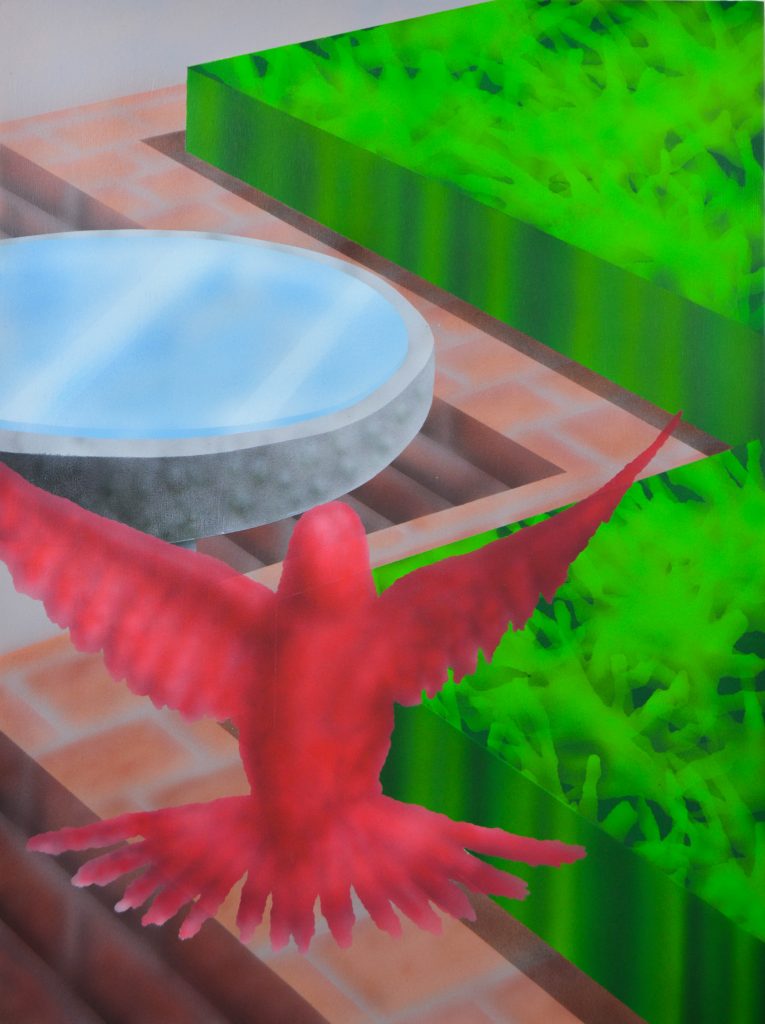 Interestingly, many of these artists have gravitated toward the use of airbrush in their work. In vogue in the Pop era, this tool has emerged again through painters including Keltie Ferris and Laura Owens. Artists seem to use the airbrush to create an engagement with the slick surfaces of mechanical reproduction and screens. The airbrush releases the hand from the surface of these paintings, allowing images to float breezily off the canvas.

Mattia Guarnera’s “Skin Template” is a fractured portrait on two panels. As the title suggests, we see that Guarnera has taken the folded and mottled surfaces of the skin as his subject matter. It appears as if a portrait photo has been digitally stretched, pulling the face and body onto a flattened surface. Also using airbrush, the painting has the feel of faces or butts copied on Xerox machines, or more formally, the flayed figure of Michelangelo’s self portrait in the Sistine Chapel. Of course the term “template” in the title directs the viewer back to the digital environment, reminding us of the uncanny simulacra we are witnessing. Paintings of gauzy cowboys by Martin Kacmarek in the exhibition are cut from similar cloth.

The filtering of the natural world via our digital experience also stands out in “Birdseye View of Another Bird,” by Luke van H. The viewer looks down on a red bird that appears about to land on a computer-generated bird bath surrounded by green grass. The vantage point and title allows us to imagine ourselves watching this quotidian drama play out. As I viewed this voyeuristic scene, I couldn’t help but think of the bizarro Gen Z conspiracy “Birds Aren’t Real” and its layers of falsity betraying falsity.

I admit I had trouble connecting with some of these paintings. At times they left me feeling like I accidentally walked into a party of the cool kids. I felt unable to quite catch the references, or have the right context to know exactly what’s going on. Nonetheless, as I left the show and felt the authentic Milwaukee winter hit my face, I was fascinated to think that paintings can be a vehicle to express our pixelated utopias, that paint itself may be a way to communicate the death of painting. This show rewards paradox and celebrates the now in novel ways.