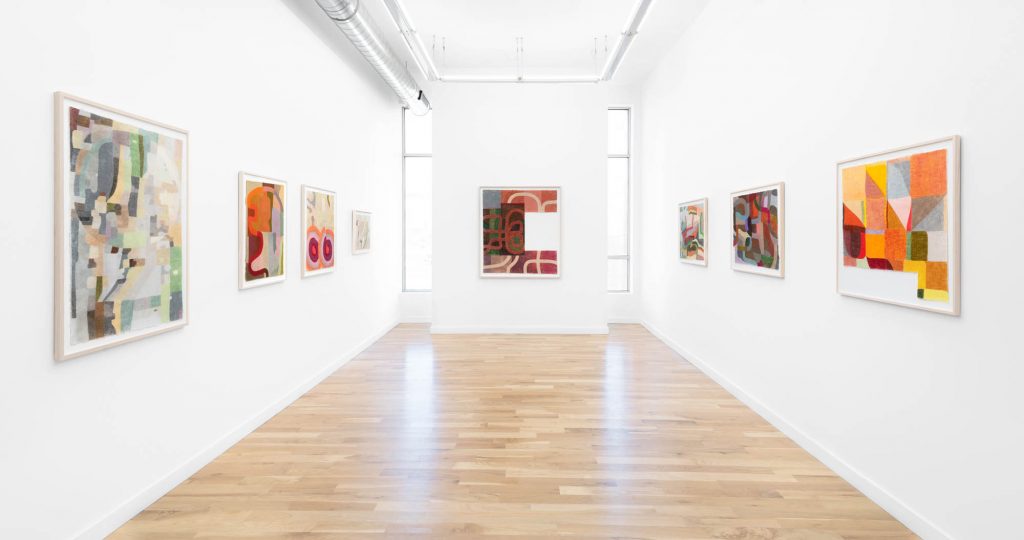 Aya Nakamura’s “Wayfaring” at Western Exhibitions and Megan Greene’s “Shrimp Eagle Owl” at Regards afford the avid viewer an unquestionably unique opportunity: the ability to witness two gifted artists working with the same means, on similar surfaces, separated by only a few blocks. These lively exhibitions share modest material: paper and colored pencils, but direct them towards surprisingly differing aims. In both cases, their formal richness captivates and intrigues.

Nakamura’s show, her first with Western Exhibitions, comprises ten nominally abstract pieces realized on a rugged, artist-made paper. Thoroughly modernist in their composition and execution, works such as the earthen-hued “Hisako” or the pastel green “Outside Inside” give form to specific memories and moments from the artist’s life. The former, a touching tribute to her late grandmother, the latter, mapping a long walk taken years ago. Tender and intimate, the artist’s hand (and indeed, her heart) animate this colorful journey.

Like an evening stroll, Nakamura’s process is intuitive. She constructs her pictures carefully, but without plan using decorative, color-tight compartments. In concert with the paper’s “fuzziness”—a tactile quality imparted to the surface by the abrasive effects of the pencil—these shapes lend a warm, quilt-like character to many of the works. This tension between illusion and object is most pronounced in pieces such as “Pane” that involve surface dimensions not uniformly rectangular. Dream-like in its totality, “Wayfaring” exudes an open-minded optimism rooted in the misty borderland between object and illusion, past and present.

By contrast, the eleven drawings in “Shrimp Eagle Owl” at Regards transmit surreal overtones that abut the mysterious, and occasionally, the sinister. Like Nakamura’s work, these pieces are materialized from a pencil’s point on an irregularly shaped support. But it’s here that the similarities end. 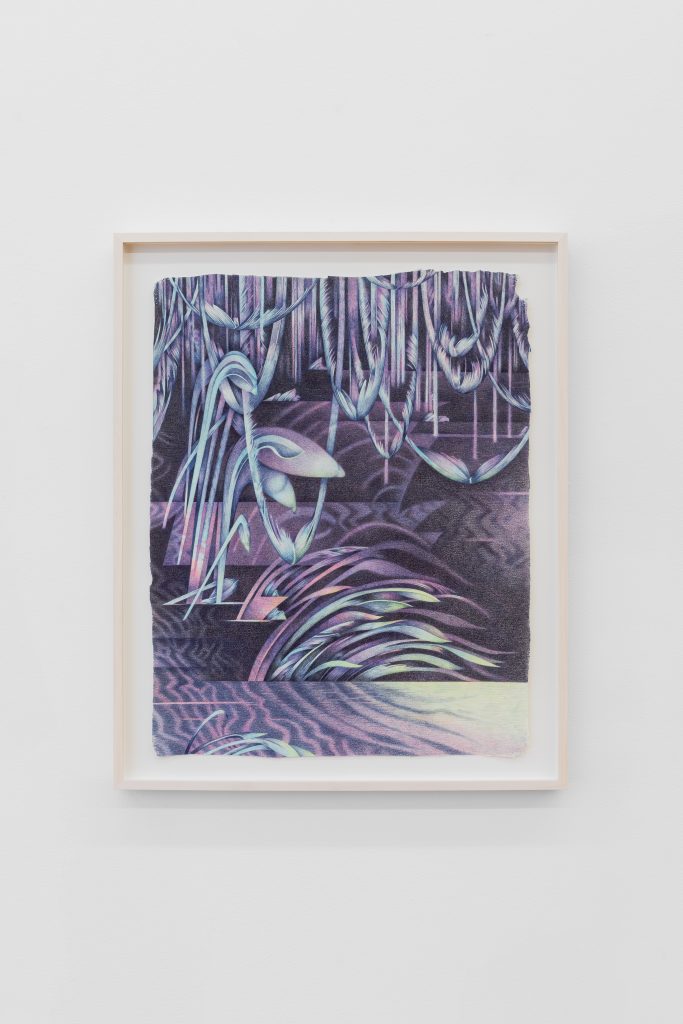 Highly saturated and effortlessly complex in their spatial configurations, Greene’s pseudo-landscapes sustain high levels of formal suggestion without any single element becoming specifically identifiable. The deep, blue-violet “Lucky” is rife with rippling shapes that initially seem plant-like, only to grow more ambiguous over time. Where Nakamura’s approach to space is undeniably modern, many if not most of Greene’s compositions reach back to the premodern era for their compositional cues.

Despite feeling as though they’re culled from some dimly lit, primordial past, pieces such as “Misplaced Affection,” “The Gizzard” and “Spoon River” emanate a silvery light that one might associate with the Day-Glo colors of retro-futurism. As a series of works that you gaze into rather than at, “Shrimp Eagle Owl” succeeds by opening a window onto other worlds, inviting the viewer to step through.

From the vantage point of the infinitely scrolling present, it’s hard to believe there ever existed a mainstream of creative development. There’s so little formal consistency, and even less thematic coherence to be found in today’s art. And while there are no longer any styles succeeding styles, art still has its camps and tribes organized around shared commonalities. Occasionally, as above, one catches glimpses of these strange confederations, and is the better for it. (Alan Pocaro)