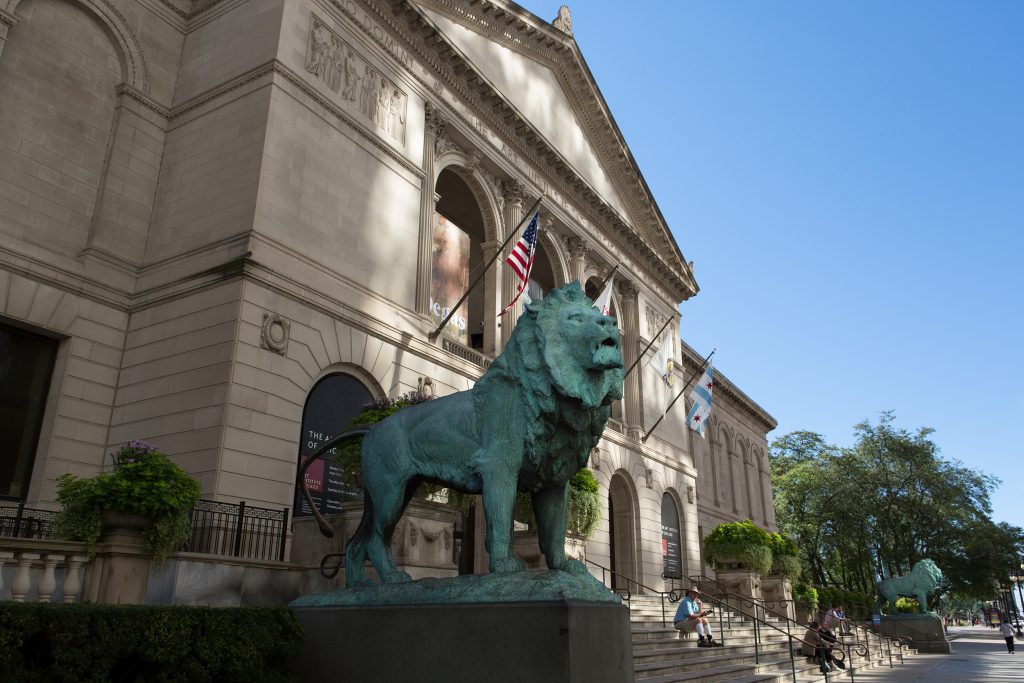 It felt big. Last September, Kait Roelofs, an administrative director at the School of the Art Institute of Chicago (SAIC) stood on the front steps of the Art Institute amidst a 200-person union rally. The streets were still warm and loud with summer’s end; passing cars honked in support and the crowd chanted pro-union slogans. Roelofs remembers thinking: “We did something, we built something, this is real.” Though she’d been on those steps many times before, she had the feeling that this time she was teetering on the edge of something important.

AICWU (pronounced A-I-C-WU) began, like most union drives, in silence. Depending on who you talk to, the idea to form a union started around late 2019 or early 2020, when museum workers approached the American Federation of State, County, and Municipal Employees (AFSCME) for support.

Around the same time, a spreadsheet called “Art/Museum Salary Transparency 2019” was circulated amongst museum workers across the nation. Workers were encouraged to enter their institution, role, starting salary, race, education and benefits. Over 3,300 employees responded, with pay starting as low as $6.95 an hour. The starting salary for a woman with a master’s degree at the Andy Warhol Museum was $8.50 an hour. A collections assistant at the Natural History Museum in Los Angeles, making $15 an hour, wrote under education: “Master’s degree, did not help.”

Meanwhile, many museum directors make annual salaries in the high six figures. In fiscal year 2020, James Rondeau, the president of the Art Institute of Chicago, made an annual salary of nearly $1 million. The same year Elissa Tenny, the president of SAIC, made $686,911. It’s worth pointing out that these salaries are determined by a board, not by the director or president themselves. It is also worth pointing out that, to a worker making minimum wage, who was required to show up to work through a global pandemic, without any sense of job security, it doesn’t matter who made the decision.

“It’s not like they are all like ‘I want to make more money,’” Abbey Davis, the organizing director of AFSCME Council 31 says, though she’s quick to maintain that museum workers should be making more money. “I have worked with these people for so long and couldn’t tell you what a lot of them make—they don’t talk about pay being an issue. It’s more like pay in terms of transparency.” 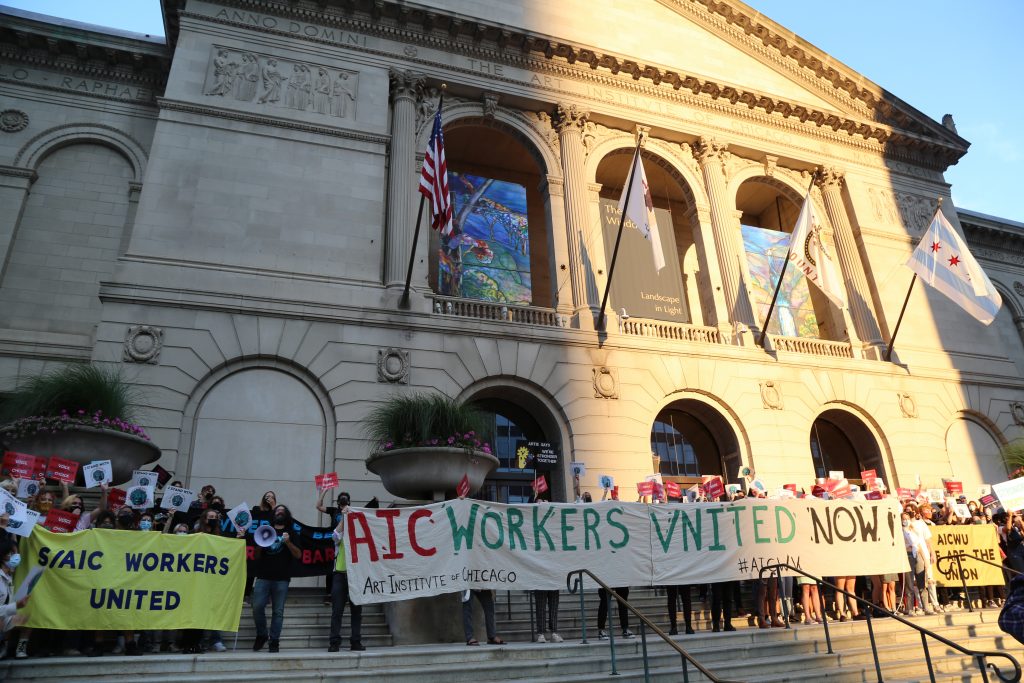 Erica Warren, the associate curator of textiles at the Art Institute, recalls a moment prior to the union when she was promoted, only to find out she made anywhere between $8,000-$15,000 less than colleagues with the same title, who had no more experience or qualifications than her. “That was really shocking,” she says. “And then I found out that other colleagues were in a similar position,  making even less money.”

When Warren found out that a union effort was underway, she was on board. Raised in Minnesota (the home of the Democratic-Farmer-Labor Party, she reminds me), she understood from an early age the difference that a union can make. Her upbringing, combined with previous experience working at the Philadelphia Museum of Art (also recently unionized), and her personal encounter with pay disparities, “really galvanized me,” she says. “It is about caring, not just about yourself, but about everyone around you. It’s wanting to see people treated fairly.”

Despite public displays of respect—“the leadership team at the museum supports our employees’ right to organize,” a museum spokesperson wrote in an email—organizers and pro-union staff members faced common anti-union tactics throughout their drive.

One tactic commonly used by employers fighting a union is to emphasize the potential loss of agreeable relationships. Oftentimes an employer paints a union as a third-party, dues-collecting foreign entity that is going to wedge its way between the worker and their supervisor. In an email circulated to SAIC staff the day after AICWU went public, the administration asserted: “Unions do negotiate on behalf of workers and their concerns. But you lose your individual voice when represented by a union.” But a focus on the individual worker can be slippery. They may write “your individual voice,” while workers interpret that as: Stay small and un-pesky.

“SAIC did a pay-equity study and sort of patted themselves on the back for finding eight people of color that were underpaid, for years, in some cases,” Roelofs says. “They corrected it, but if we had a union, we would have salary transparency, and this wouldn’t have been a thing for years, you know? These things have come out after the drive started, but have only reinforced why we’re doing this, why this is so crucial.” Indeed, in that same early email, SAIC administration brought up the pay-equity study.

Another anti-union tactic of employers is to emphasize the uncertainty of negotiations. If you are happy with your pay and benefits now, the argument goes, then why let a union come in and change things? In an August email to SAIC staff, administration wrote that if AFSCME represents the staff and enters negotiations, “the outcome of that negotiation is uncertain… This means that managers may no longer be able to provide the flexibility that you are currently used to, such as adjusting work hours to accommodate personal appointments or making adjustments to your start and end times.”

“That’s ridiculous,” says Tracey Abman, executive director of AFSCME Council 31. “They are imagining some 1950s union. This contract is imagined and put together by workers at this moment in time.” While many SAIC employees have good overall relationships with their supervisors, Abman asserts that “everybody should have the option of flexible work hours [when appropriate to the job]. It shouldn’t be based on the goodwill of your supervisor or your employer.”

“A rising tide lifts all ships,” Davis says. “The reality is we’re not going to bargain down, this is about lifting people up in these industries. The only way we can do that is by everyone coming together.”

The union election at the Art Institute produced 142 yes ballots, forty-four nos, and twenty ballots not counted due to management challenges. At the school, 115 voted yes, forty-eight voted no, and forty-four ballots were challenged. Ineligible employees included those working for Central Services, managerial employees, security guards and supervisors. The challenged ballots belong to employees that the administrations do not believe should be represented by the union, based on whether or not the employees should be considered supervisors.

In twenty years working for AFSCME, Davis says she has never seen so many challenges—to the point where it seemed less like logistics and more like a tactic. As she put it, a typical election produces three or four challenged ballots, twenty would be very high, forty is out of control.

Still, before the vote was counted, but after the positions had been challenged, a museum spokesperson told me: “We want to be sure that the voices of all employees are counted in the election, whether they support or oppose unionization.”

Before the bargaining committees and administrations enter negotiations, management will have to choose whether or not to continue challenging ballots. With the overwhelming majority in favor of the union, the election itself cannot be overturned, but employees who cast votes can still be excluded from the union.

“We’d like to resolve as many [challenges] as possible without the time and money wasted on the NLRB hearing process,” a spokesperson for AFSCME says. “Management can simply agree to drop its challenges and include these employees in their union, which they should do. But if they continue to fight employees’ right to be included, we will be prepared to win at hearing.”Management has not yet announced their decision. The organizing committees have begun surveying priorities for negotiations, and the general membership is preparing to elect their bargaining committee.

“There’s this sense that people have a kind of ‘work face.’” Warren says. “It’s like: ‘Everything is good, everything is fine, I am working hard, I am doing what I need to do.’” Organizing has opened up the possibility to share in a way that’s more grounded: “Actually, things are hard, here are my struggles,” she says. “Figuring out what we can do to make this better, and what we can do to solve these problems.”

Warren says she enjoyed the opportunity to deepen relationships with her colleagues, to have more nuanced and complicated conversations, and to think through issues that don’t directly affect her but will make the workplace better—issues like accommodations for the immunocompromised and parental leave. “Part of building solidarity is talking to your colleagues and realizing that the thing you’re seeing over here, isn’t just over here,” Roelofs says. “That’s been really powerful, particularly during the pandemic.”

AICWU is now a local union of AFSCME, which represents unions at ninety-one cultural institutions and 275 public libraries, including the Chicago Public Library.

As for the message they hope to send to other cultural institutions across the nation: “Call us!” Davis says. “But be thoughtful.”