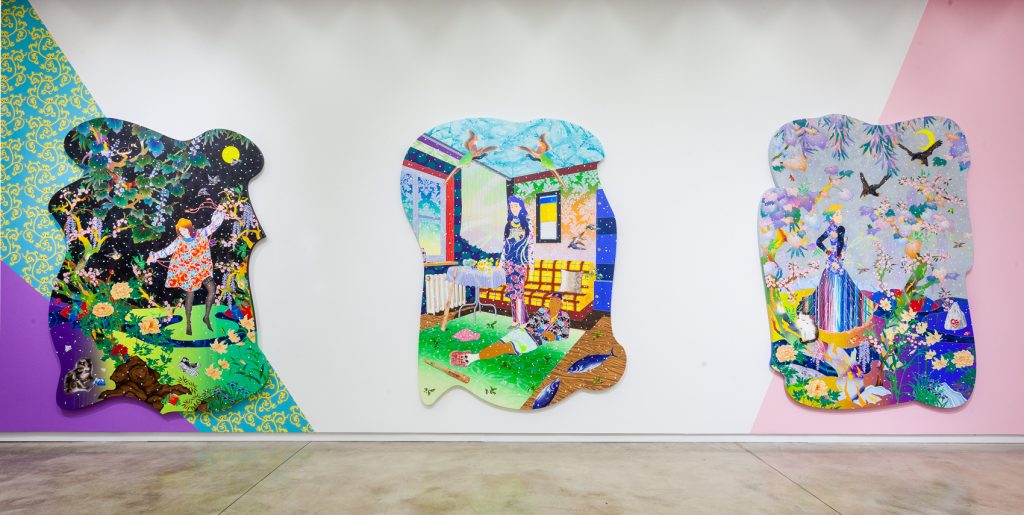 What really is the best part about us? Is it the perseverance of hard-working folks who drive trucks, wash floors or mind kids for wages that keeps them perpetually in debt? Is it the extravagance of the entrepreneurial billionaires who buy yachts and donate millions to art museums? Or something in between? A few people are enriched by the global corporate economy, many more are impoverished by it. That ever-widening gap drives politics as well as contemporary art, as it threatens democracy around the world.

“The Best Part About Us” is what New York-based, Japanese-born Tomokazu Matsuyama calls his second solo show at Kavi Gupta, and he has taken his stand on behalf of what he calls “the global us.” His work is both monumental and meticulously finished. It is energetic and brilliantly colored, but also cold and impersonal. The human figures he depicts are young, healthy, beautiful and lavishly dressed. But they also appear to be dazed or sleepwalking.  Privileged youth, they have been given everything except for a sense of who they are and what they’re supposed to do. It’s pretty clear which side of the gap Matsuyama is catering to. If it’s not the materialistic transnational wealthy, it’s those who aspire to join it. 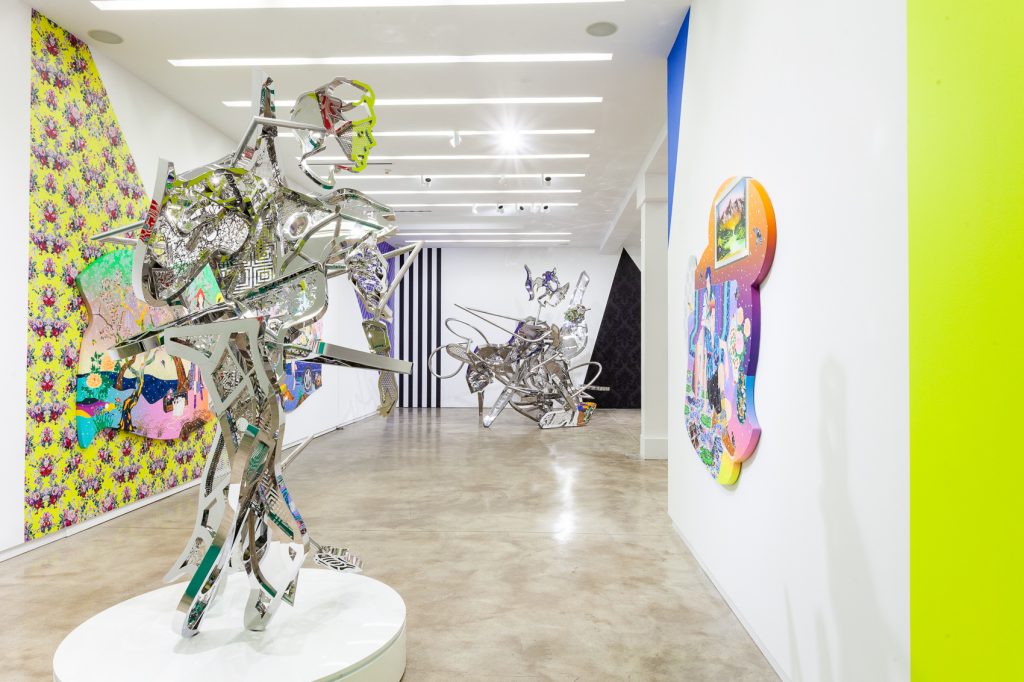 Social justice and racial identity, two of the trending concerns in contemporary art, are not addressed here. Nor are many other agendas of postwar American art: defiant personal expression, semiotics or philosophical nihilism. Instead, he has created a jaw-dropping, wonder-filled fantasy world where pretty snowflakes are always falling but no one ever gets cold. It’s a kind of Disneyland. What sets him apart is the aesthetic intensity of his work. He aims for gorgeous—not just cute. Tomokazu Matsuyama is a powerful and sensual graphic designer in the Japanese tradition of the Bijin-ga paintings of beautiful women.

If you visited “Painting the Floating World,” the exhibition of historic Japanese painting at the Art Institute of Chicago in 2018, you will have some idea of his work. Not from the original Japanese paintings, but from the monumental reproduction that hung from floor to ceiling at the entrance to the exhibition hall. It captured all of the nineteenth century original’s amazing detail, but it was also way over scale—leaving the viewer overwhelmed.  Matsuyama does not paint on his own large panels. The many skilled artists who work in his studio do that, based upon designs which he probably composed on a computer screen. Digital graphic applications are the perfect tool for the kind of layered image sampling found in this work. As Matsuyama puts it: “I’m just sampling from everyone’s work until it will become  something original.”

Despite my own disorientation as well as dismay over the political implications, it was impossible not to smile at each and every piece in the show. They’re joyful. The city of Chicago should commission him to decorate the new international terminal at O’Hare. His work has all the thrill as well as anxiety of boarding a jet plane bound for the other side of the planet. And it feels just as expensive as a first-class seat. (Chris Miller)

“Tomokazu Matsuyama: The Best Part About Us,” is on view at Kavi Gupta, 219 North Elizabeth, through March 19.