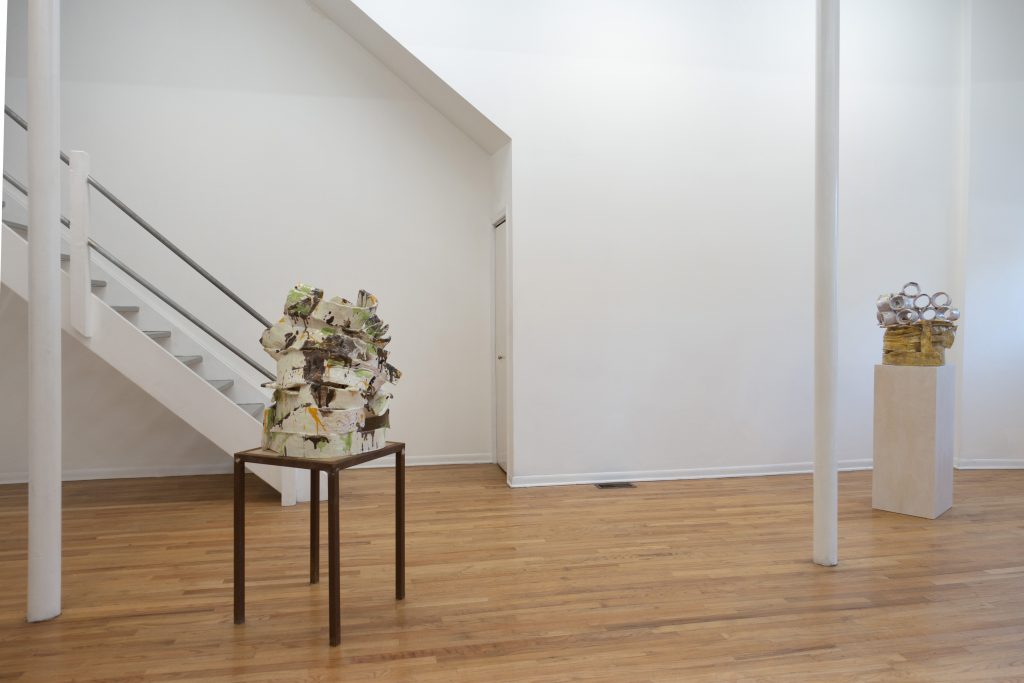 Viewers at the opening of Deborah Handler’s show at Produce Model got a little handsy. “Negative space with holes,” the largest work in “larger work, (‘tea for two’ Monk’s version),” consists of two sections stacked on casters. A formidable steel base supports a ceramic cube on top. The sides of the cube are dotted with holes. Light pops in and out of the “polka dots,” and over the course of the opening, so did viewers’ fingers. “Negative space with holes” wasn’t the only work that was transgressed in this way. After his encounter with “welcome,” a wall-mounted panorama of jagged strips painted with wet n wild, one viewer left with a red smudge on his hand.

What is it about Handler’s work that invites hands-on interchanges? “Improvisation,” Handler states in the press release, “is a (the) fundamental aspect of my approach to making.” A QR code links to a Spotify jazz playlist for the show, and of course includes the title song of the show, Thelonius Monk’s “Tea for Two.” It’s no wonder that the work both exudes and invites interactive play.

What Charlie Rouse, John Ore and Frankie Dunlop are to Monk, gravity, weight and materials are to Handler. Several sculptures from her “slab & cylinder” series (e.g., untitled (“ad infinitum”), and “‘Tea for Two,’ Thelonious Sphere Monk’s version”) demonstrate one of Handler’s guiding principles: “Structure is the key to improvisation.” Vertically stacked slabs create stable bottom architecture that cylinders pile atop. Their profile bears a rough resemblance to Bruegel’s Tower of Babel, and they read as both heavily grounded and teetering a little, with those cylinders and their urge to roll. 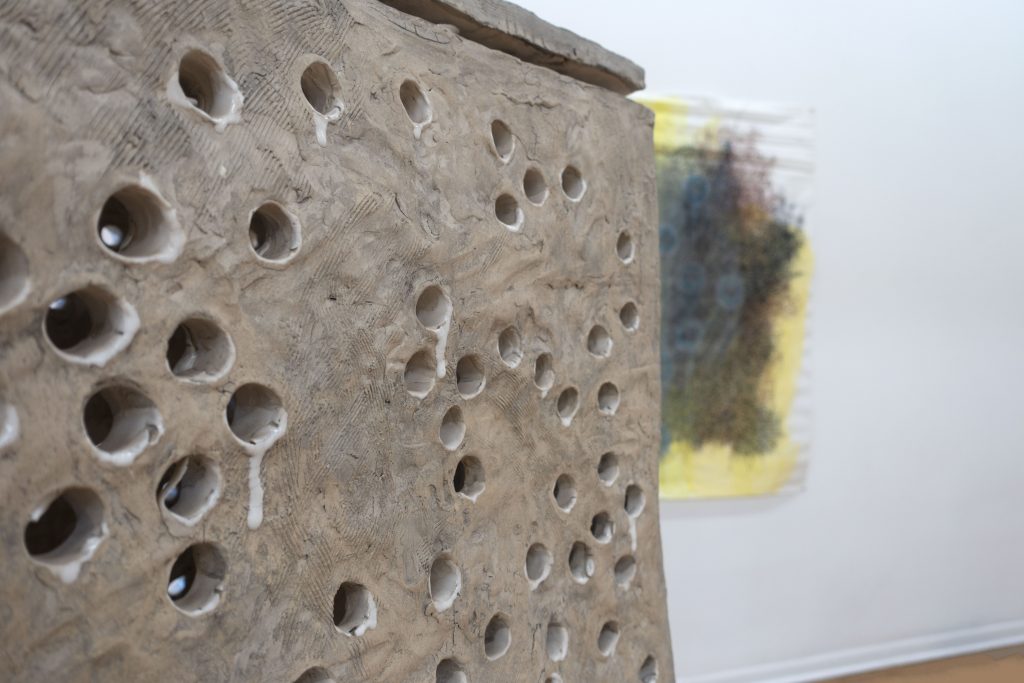 Handler’s works on paper show us how much gravity loves gouache. In “june” and “untitled, resolving a problem,” long vertical drips overlay softly horizontal forms behind them. In “June,” the drips align densely, forming a kind of scrim over white forms that seem to be receding into the background leaving the viewer with a sense of longing. In “resolving a problem,” a warm form and a cool form meet for a dance, bumping each other in the process of push and pull.

The show’s installation brings out the works’ animated quality. Several sculptures have left the pedestal for unexpected locales: up a staircase, on the refrigerator, in a window sill. In addition to interesting sightlines, their placement provides the sense that they arrived there of their volition. They hopped up the stairs, mounted the fridge and went to look out the window as moment-by-moment instinctual moves. (Meg Reuland)