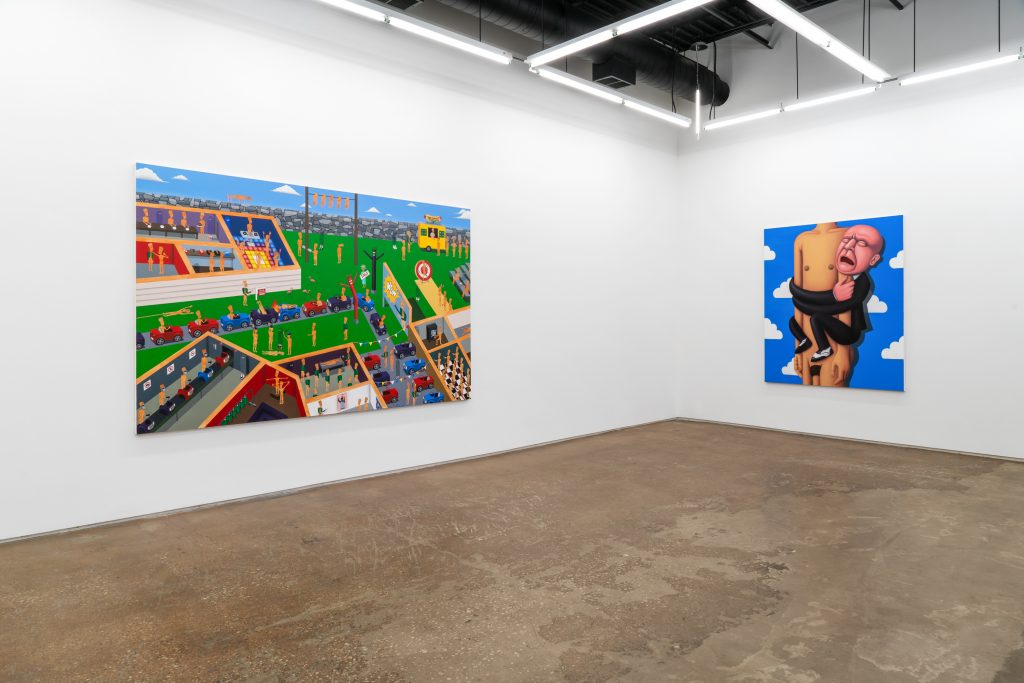 Blackness again takes the forefront in Jake Troyli’s new exhibition at Monique Meloche, his second solo presentation with the gallery. “Slow Clap” drives Troyli’s complicated narratives surrounding Blackness, with exuberant colors and large-scale works. Between the use of poignant hues and humor, the viewer experiences a conversation on race that takes the higher road.

New large-scale images address the feelings of otherness in Black and brown communities. “The High Dive”(2022), reveals a Black-brown man, his hair styled into a large Afro and wearing an American flag outfit, at the top of a diving board. This image brings up elements of the conversation in America of Black athletes and the otherness of Blackness when addressing athleticism. As there is only one figure in the painting the focus of the viewer lies on him. Black athletes are tied to success in their respective fields but this can create an inhumane interaction when watching the sport. In “The High Dive,” the figure has accentuated stereotypical Black features in regards to the genitals, buttocks and hair, making him a spectacle and relieving him of his vulnerability as a Black individual. In contradiction to these assets, the figure adorns a facial expression of dismay. A similar feeling of alienation is depicted in the paintings “Superfan” and “The Crowd Surfer,” where a nude Black figure—their head located off the canvas—is clutched at by white hands. 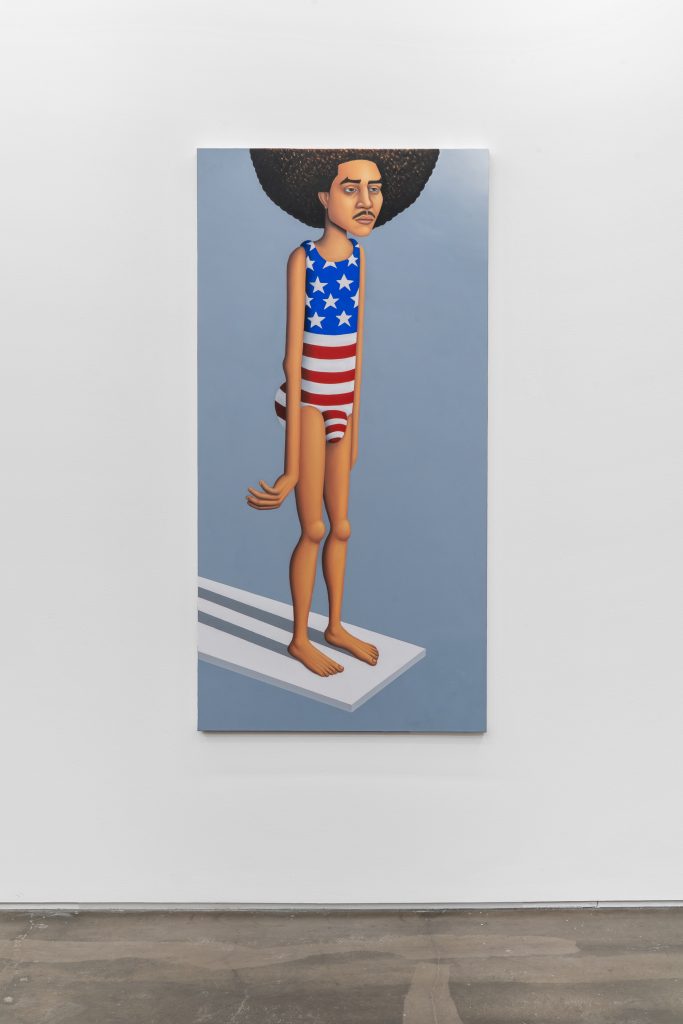 With his use of the Renaissance practice of underpainting to generate tones, Troyli adds a layer of race to the art historical discourse. Black individuals were left out of the art history canon in that period. There is also an element of a lack of familiarity to the artists’ figures. This incites generalization, specifically when it pertains to the Black body and the overt stereotypes that still currently exist. The viewer must confront their stereotypes when looking into the painting to get past a superficial interaction with the piece.

The figure Troyli depicts is closer to a self-portrait than a randomly picked Black man. He transforms himself into a cartoon addition to the conversation on the generalization of Black people, specifically Black men in America. The flexibility seen in his avatar speaks not to how we use our own bodies but how athletes’ bodies are often seen as otherworldly and without emotion from onlookers.

The title of the show contributes more to the show than the viewer may realize. The slow clap speaks to the position Blackness is placed in our society, and how that slow clap represents the sight of a Black person as a spectacle, an act and a source of entertainment. Troyli questions societal norms in regards to Blackness, athleticism and interpersonal relationships. The viewer will have to look beyond the four corners of these paintings to understand how they contribute to this dynamic. (Caira Moreira-Brown)