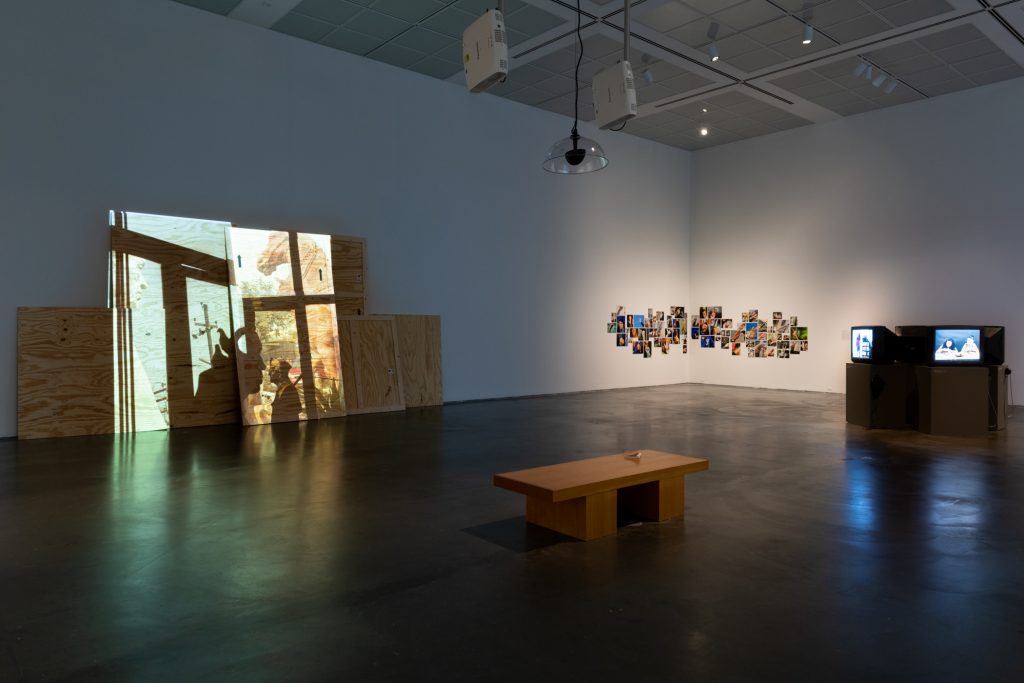 Spanning over two decades of her career, “The Man Who Talked Until He Disappeared” transforms the MCA’s Bergman Family Gallery into a site for looking at the personal and social through a frame of colonial resistance. Writing this as tensions rise between Russia and Ukraine, it is impossible to ignore the delusion of rightwing nationalism that has seeped into the consciousness of leaders across the world. The nationalism we’re witnessing is dividing once-connected communities, forcing us to reexamine how power progresses in contemporary cultures.

Upon entering, the visitor undergoes a rite of passage through two glossy red security barricades, strategically dividing the entrance. Creating the condition for the performance of “choosing a side,” Abidi’s preoccupation with bodily narrative and rhetorical signs of the bureaucratic encounter are revealed. The artist’s interdisciplinary way of complicating the viewer’s role in receiving or not receiving complete meaning, or knowledge (that is power), inverts the premise of being “moved by art,” forcing the question of whether a situation or belief truly ever existed. 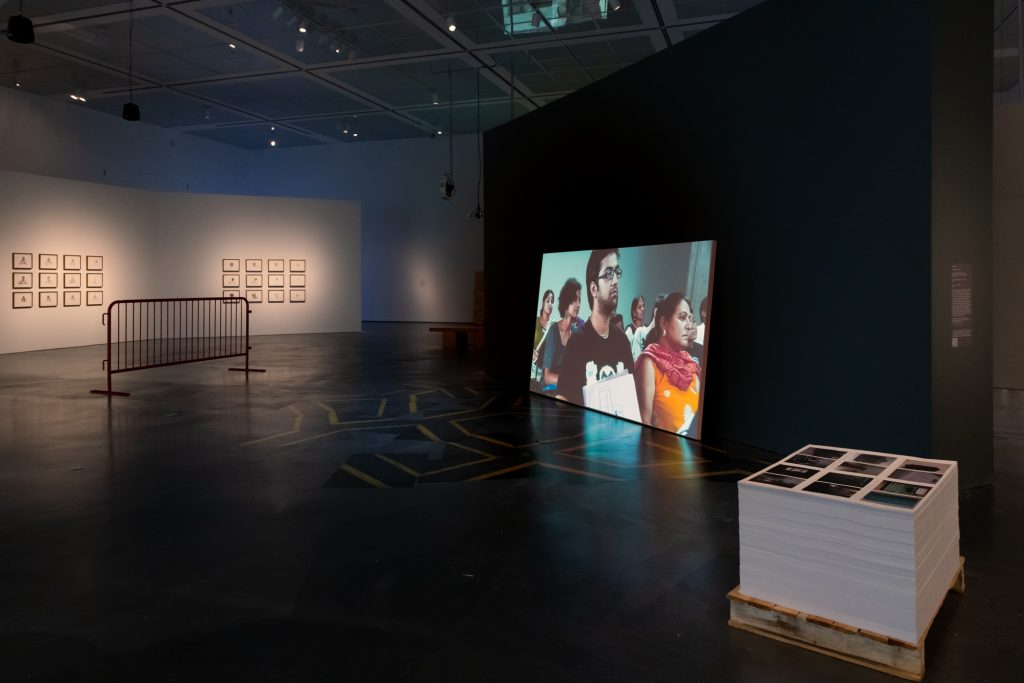 The exhibition is laid on an open floor plan with no distinct chronological order. Abidi’s works are episodic encounters with themes that are recursive in nature. Most works lend themselves to the specificity of sites they were originally commissioned for. “Death at a 30 Degree Angle,” 2012, originally commissioned by the Sharjah Art Foundation, is a two-channel projection on large, staggered wooden crates. The film is a nonlinear narrative about a local politician commissioning a sculpture of himself at an artist’s studio. Casting real-life Indian sculptor, Ram Sutar, known for his monumental sculptures of India’s nationalist heroes, alongside theater actor-director Danish Husain, who poses as the narcissistic state official, Abidi transcends genres of docu-fiction. She gravitates toward the studio and assistants, caricaturing the self-obsessed politician. Her discursive style of engaging with real and fabricated realities pushes the boundary between memory and myth, while the identity of the politician in relation to that of artistic labor in India speaks of social hierarchies that support the stratification of political values and culture in the former colonies. Sutar tends to his sculptures with the humility and care of a seasoned sculptor, with assistants who might have once migrated from smaller towns, following suit. In light of the recent topplings of racist monuments across America, “Death at a 30 Degree Angle” forces the question of how nationhood is built and by whom, and whether events like India’s war for Independence can truly be registered as signs of progress. 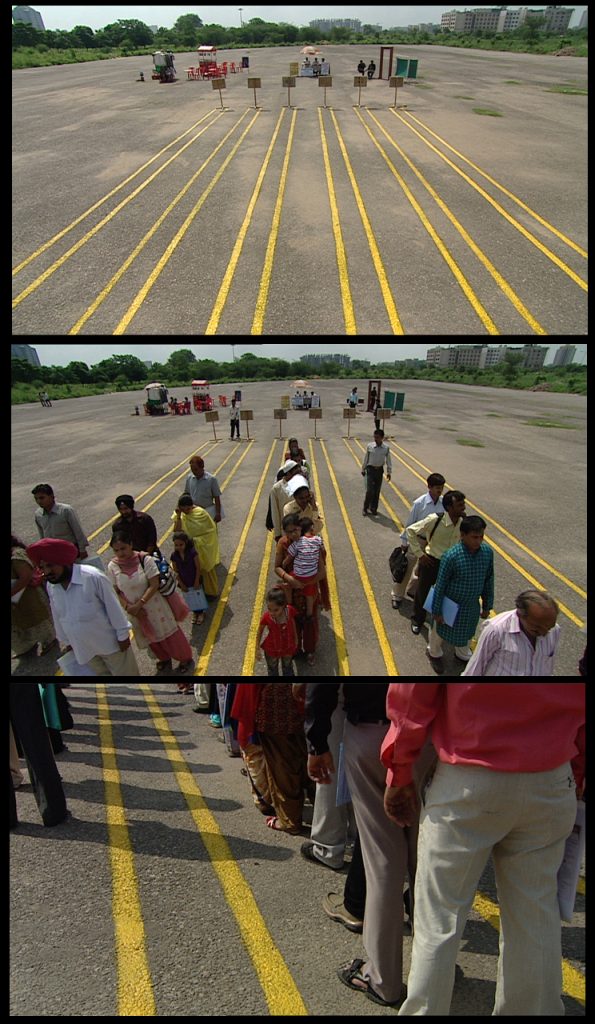 “Bani Abidi,; Still from Death at a 30 Degree Angle,” 2012/Courtesy of the artist and Experimenter, Kolkata

A large-scale projection, “The Distance From Here,” 2009, is paired with components of “Section Yellow,” 2009. Vinyl floor stickers of yellow road paint zig-zag beneath the projection, forming a labyrinth closing in on itself. Beside this, a pile of inkjet posters of props and documents one carries in preparation for a journey, serve as takeaways. The familiarity of the scene in the video is unnerving for immigrants like myself. Abidi captures everyday people enacting a scene at an embassy, presumably in the artist’s hometown of Lahore. A line of men and women pass through metal detectors and makeshift bureaucratic apparati to queue outside a consulate. This is not much different from my experience of the U.S. Consulate each time I visit India. The impersonal gaze of the camera mimics the coldness of a politically correct encounter. It captures the visible heat of a poorly ventilated waiting room, the nervous emotional responses of hopeful immigrants awaiting their fate at the hands of an unknown visa officer. I’m reminded of a talk with Italian American activist scholar, Silvia Federici, where she reiterated the plight of the immigrant body: “No immigrant leaves their country out of choice. It is because of the lack of welfare, opportunity, and freedom that people have to move across a border.” Abidi’s framing of this complexity and the violence of migration binds the viewer to the condition of the subject and the dark side of the State. Assimilation in a foreign land comes at the price of disconnecting from one’s own. 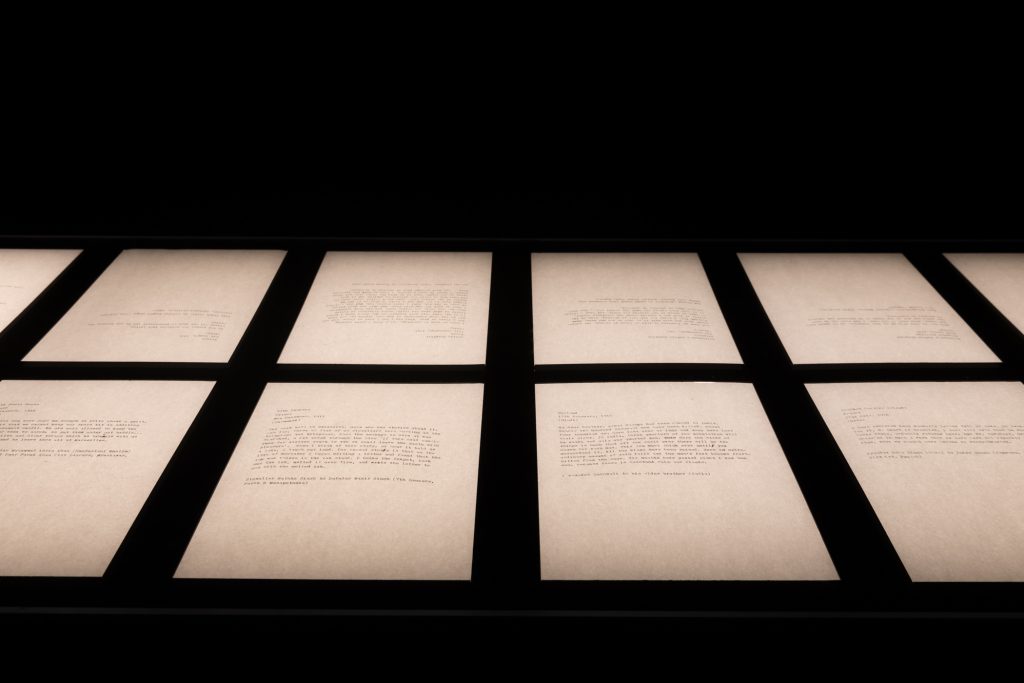 “Memorial to Lost Words,” 2016, is an installation commissioned by the Edinburgh Arts Festival. Abidi’s piece was made in response to the thematic “More Lasting than Bronze,” a commentary on public monuments within a city of over 200 statues (of which one was of a woman, and another of a Skye Terrier). Abidi’s anti-monument sought to intercept the abandoned chambers of the Scottish Parliament with the voices of Punjabi folk singers. Recognizing the violent, bodily upheaval of young “Hindoostani” men forced to serve as sepoys during World War I, Abidi’s memorial is a tender telling of the Punjabi Hindus, Muslims and Sikhs whose lives were sacrificed in service of the Empire. Encased backlit, typed letters in a central display case are the only source of light in a completely darkened room. The voice of an elderly Punjabi lady sings folk songs that are no longer sung. There is something otherworldly in the incantation of her voice. Growing up with grandparents who belonged to the other side of present-day India-Pakistan borders, the longing for one’s homeland grabs hold. The breathless narration of Punjabi folk singers, incorporating riddles and daily metaphors in rhythmic patterns, makes the subject matter better suited to the unacquainted ear.

The search for a singular identity is problematic for immigrants, and matters of war, as was the case of India and Pakistan (and is the case of Ukraine and Russia), further complicating the estrangement between people who once shared common history, geography, language, culture and tradition. Abidi’s concerns are, in ways, shared with mine in the sense that our families originally “belonged” to the “other side” of the border. Raised in Karachi in a Muhajir family, her ancestors once migrated to Pakistan just as mine once escaped Lahore for India, during the largest forced migration of the twentieth century. They too were inhabitants of the broader region of Sindh, and amongst over twelve million Hindus and Muslims who were subject to extremities of sectarian violence only comparable to the atrocities of the Holocaust. These enduring rivalries are touched in early works like “Mangoes,” 1999, “Anthems,” 2000, and “The News,” 2001, where the artist is on both sides of the divide. Casting herself as both Indian and Pakistani, she employs jargon associated with the Indian and Pakistani state. As a woman inhabiting either side of an ideological divide, Abidi persistently challenges “origin-myths” that plague South Asian identity. In “The Address,” 2007, old televisions placed across sites within the museum hold an uninhabited image of a set prepared for a presidential address. This marked moment of anticipation captures how bureaucratic dramaturgy functions in the absence of true leadership, at a time when governments dawdle over ongoing crises compounded by a global pandemic.

Exploring how dramaturgical principles organize the State, we encounter sixty-nine inkjet prints of varying dimensions in “The Reassuring Hand Gestures of Big Men,” 2021. Brecht’s notion of gestus applies to a series of low-res, pixelated photographs of disembodied gestures saluting, clenching fists and inserting two-fingered peace signs into the ether. Familiar in their syntax yet alienating in their effect, Abidi captured these images while in isolation over the pandemic. Recapturing images from TV screens and laptops, she intentionally incorporates the reflections of domestic plants, lamps and other environmental factors alongside digital trappings of the cursor and crop marker, rupturing the images original trajectory. Recharting their course, pixels quietly infiltrate contemporary art’s sacramental order for high-res images. The viewer is left with unconvincing performances of grand men, as empty gestures function more as social commentary than mere affect. 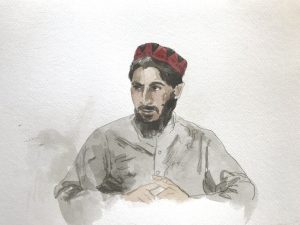 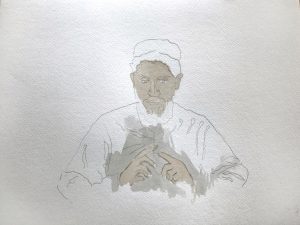 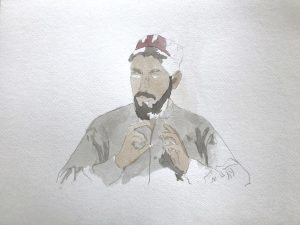 “The Man Who Talked Until He Disappeared,” 2019-2021, is an ongoing series of watercolor portraits of Pakistani actors, writers, journalists and intellectuals who were made to disappear during former President Musharraf’s administration. Emboldened by America’s need for vengeance post-9/11, the government handed over tens of thousands of men and women, without any due process, to the U.S. government to be criminalized. These enforced disappearances of those considered to be a “menace” to the establishment captured Abidi as she listened to talks and speeches, now erased, via YouTube. The diaristic series of incomplete watercolors indexes figures the State is determined to erase.

With a background in painting, Abidi’s works achieve their material fulfillment in the pairing of video with objects, photographs, drawings and prints. “Security Barriers A-Z,” 2008-2018, is a design typology of twenty-seven security barriers that were imposed across checkpoints in Karachi, shortly after 9/11. Questioning the “design” of safety and state control, the two-dimensional prints remove the original object from the chaos of context. One questions who is being protected from whom as we peruse a red-and-yellow striped form of “Security Barrier Type X” at the Pakistan American Cultural Center, or the black iron metal spokes atop cast concrete “Security Barrier Type T” at the new American Consulate. The paradox of security barriers is that they instill quasi-fear that may not exist before the encounter. Their mimetic configurations and unusual shapes cannot technically guarantee “security” yet they effectively separate one side from the other—the government from an enemy, the state from its subject.

Abidi’s proclivity to disrupt stereotypical understandings of what is termed “South Asia,” “Independence” and “Nationalist” gives rise to the possibility of living with/in a state of difference. At times diaristic, at others non-didactic, the works are composed of a multiplicity of perspectives that do not seek to inform the viewer of absolute truths. As a constant state of fear surrounds us, Abidi’s “The Man Who Talked Until He Disappeared” emerges as an exposé of the decay of democracy. With an imminent inflation at the end of the tunnel, it is troubling yet necessary to unveil the empty gestures of those in power, to slowly put an end to the exploitation of the migrant experience, whose true identity exceeds the Western confines of “identity politics.” (Pia Singh)

“Bani Abidi: The Man Who Talked Until He Disappeared” is on view at the MCA, 220 East Chicago, through June 5.