In the context of ongoing crises in our city—structural racism, the pandemic, unequal access to healthcare and affordable housing, climate change—this group of Breakout Artists concentrates on their communities in ways that are both generous and deeply restorative. In addition to creating brilliant work that is complex and colorful, joyful and heavy, these artists are rooted in their communities, ever striving to build meaningful connections and expand opportunities for others. Take Helen Lee, who honors the lives of those lost to hate crimes as a step toward awareness and healing. Or Roland Santana, whose online directory “Rupture” is a platform for BIPOC artists to share resources. Joseph Josué Mora has created a zine to teach people how to support undocumented immigrants. If there is one thread running through the practice of these artists, it is their commitment to creating the world they want to see. Whether it’s Shir Ende’s movement work, which asks us to consider how we occupy space, or videos by Jazmine. that show what care looks like, let these artists be a guide to a more thoughtful world. (Kerry Cardoza) 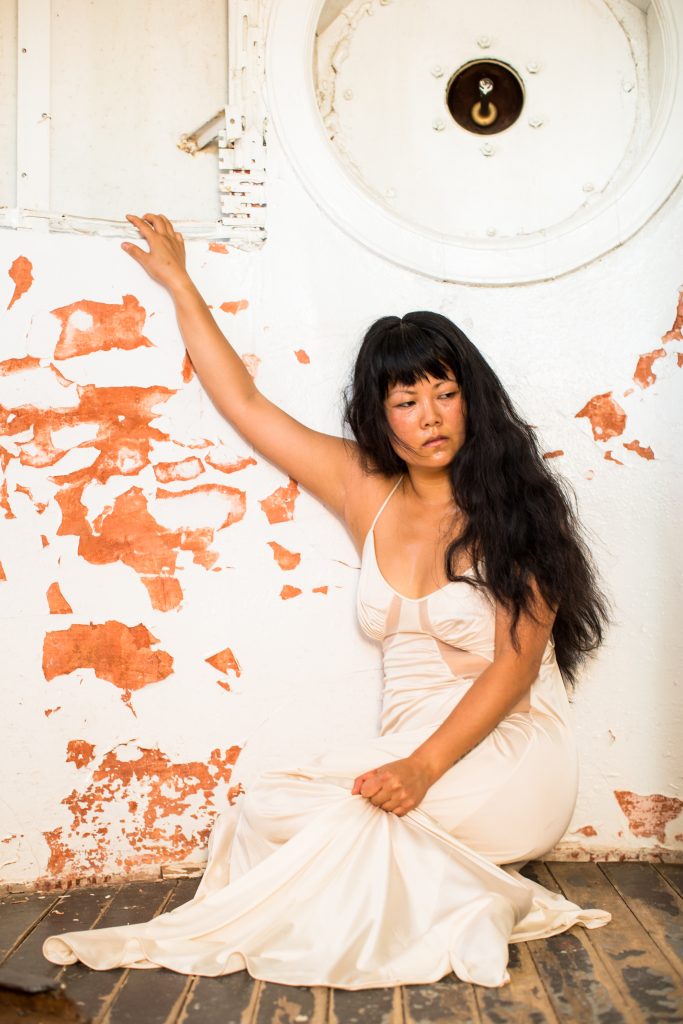 During one of Helen Lee’s performances, she released 10,000 ladybugs so that audience members might feel the soft touch of one landing on their skin. In another, performers ate grapefruit, the smell permeating the air. In a piece staged in a park bordering Lake Michigan, participants were invited to close their eyes and move toward the water, entrusting others to guide their movement. Lee is interested in manipulating the senses, heightening and expanding the experience of her work, ultimately as a way to feel grounded in one’s body.

Lee first explored movement after high school, when they stumbled upon an article on hula dancing. Lee (who uses she/they pronouns) started taking classes, joined a Polynesian dance troupe and studied dance at the University of Hawaii at Manoa. “I don’t know that there was an actual pinpoint of like, yes, I want to become an artist,” Lee says. “It just started to evolve.” 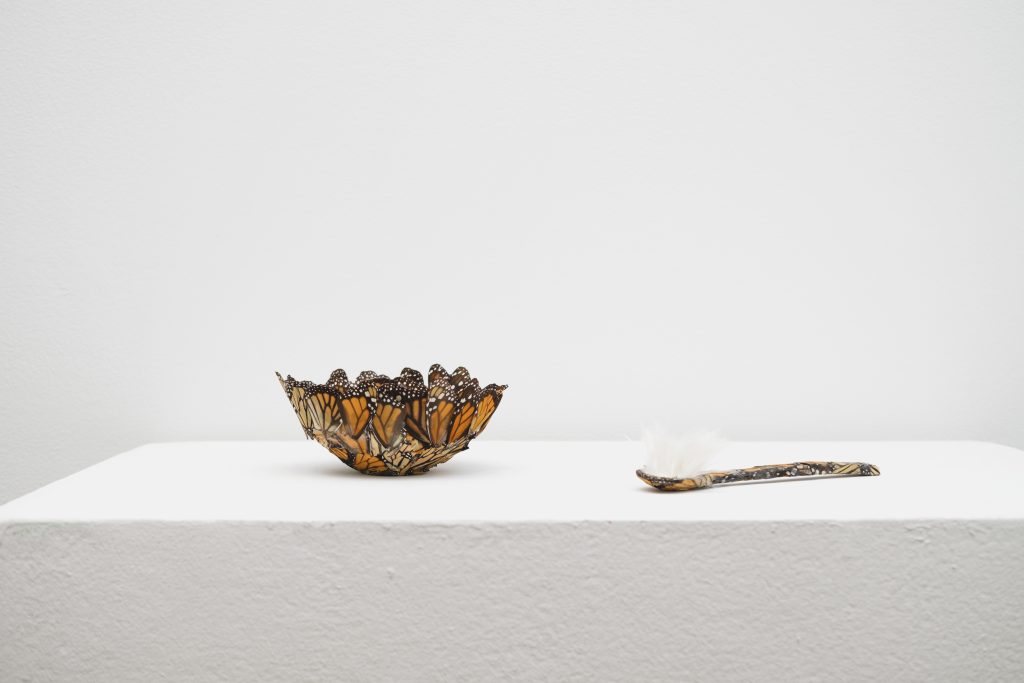 Lee returned to Chicago and experimented with movement and video, obtaining a master’s degree from the School of the Art Institute in 2019. “I keep coming back to movement because it’s my body and it’s the only vehicle that lives with you 24/7,” Lee says.

After college they also began a yoga practice, which helped lessen their anxiety. The mindfulness of yoga feeds into Lee’s performance art, particularly her more improvisational work, which requires nimbleness. “Improv is a really lovely way to explore what you’re capable of,” she says. “Especially for a yoga practice, if you can feel grounded in yourself, then you’re a little bit more prepared for those surprises.” 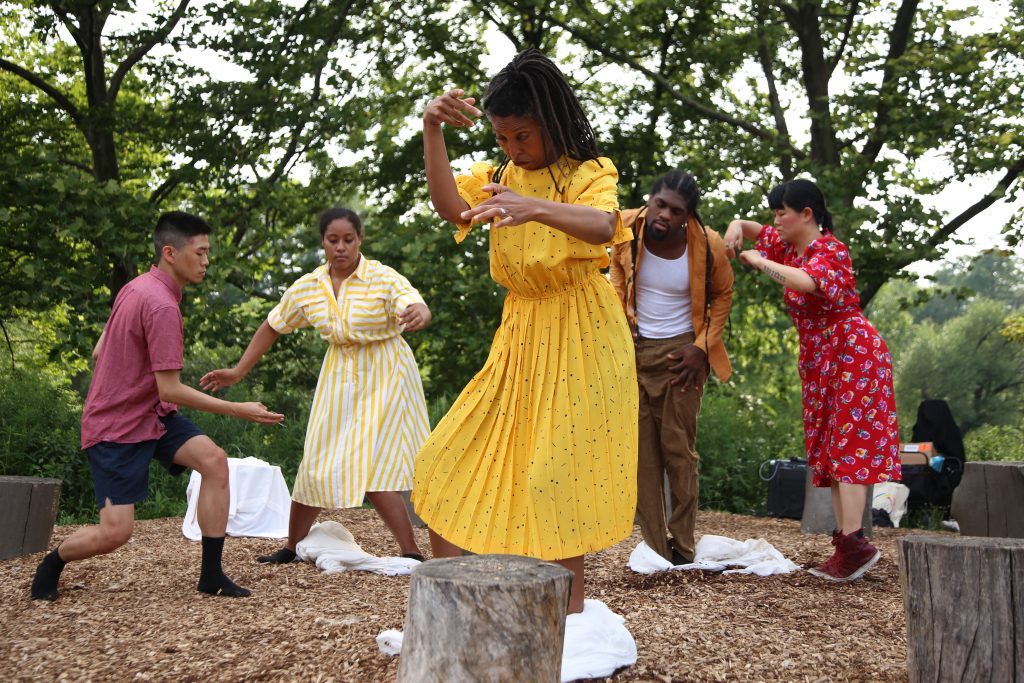 “Dreaming of Cocoons in a Butterfly War” (later renamed “Weaving Cocoons; Colliding Monarchs”) was staged at five Chicago parks during the summer of 2021. Lee worked with a group of performers to explore violence against Black and Asian Americans, the potential for Black and Asian allyship, and the way the pandemic put us all in a kind of cocoon, where our world has the potential to transform into something wholly new. Each performance was slightly different. Lee identified more than a dozen Black or Asian people killed in hate crimes in the United States, and part of the events involved sharing those stories. In one iteration, performers whispered the stories through cardboard tubes.

Lee explored these themes further in a duo exhibition at Chicago Artists Coalition, part of her 2021-22 HATCH residency. In “Deep Cuts,” Lee included small gestures for some of the hate-crime victims—singed paper is a reference to Maggie Long, a high school senior who was burned in her home; a QR code linked to Lee’s website, where you can read about the eighteen lives in more detail. 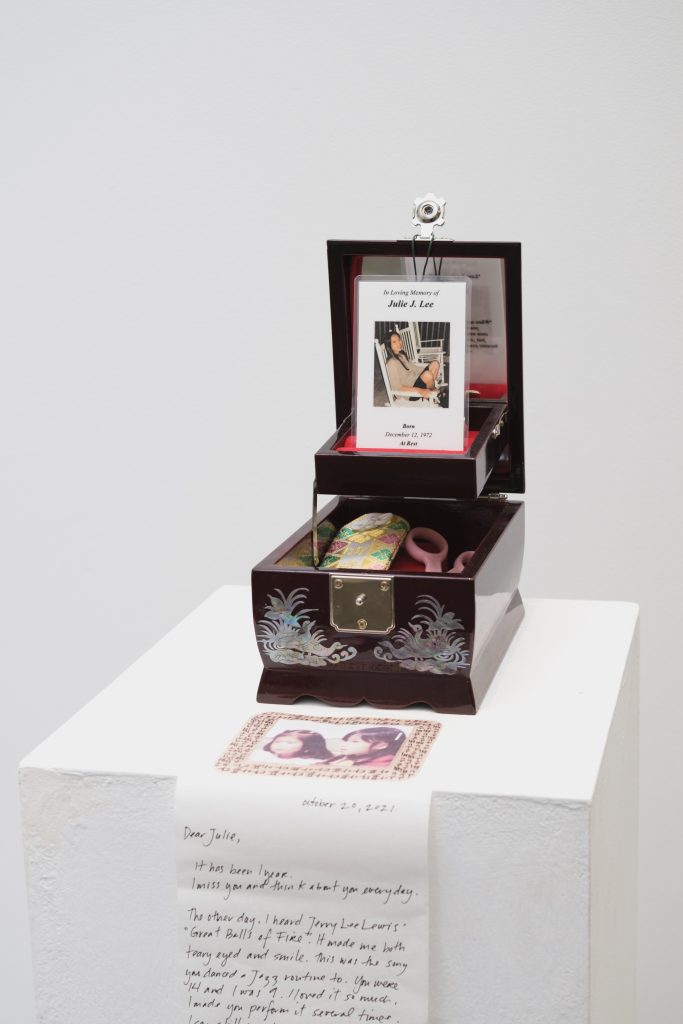 “Deep Cuts” also included “Specimen Study,” a desk featuring family photos and objects, meant to reference the importance of studying one’s family history. Part of Lee’s interest in the complicated histories of Black and Asian communities stems from her own personal and often painful experiences with racism. “I started thinking about how can we come together a little bit more,” they say. “It’s hard to look at, it’s also hard to admit things about the people of my country, [being] racist.” Lee hopes that by raising awareness of these experiences, racism and hate become less common.

Throughout her work, including a June performance at Links Hall, the culmination of her Co-MISSIONS Residency, Lee offers the potential for healing. They hope their work inspires people to be more mindful. “Even though this pandemic is really challenging for all of us, I also think that, for some of us, especially artists, we’ve been more reflective,” Lee says. “How do we want to continue forward?” She recalls a lesson from her meditation teacher that serves as a mantra: to leave the earth the way you found it or better. (Kerry Cardoza)