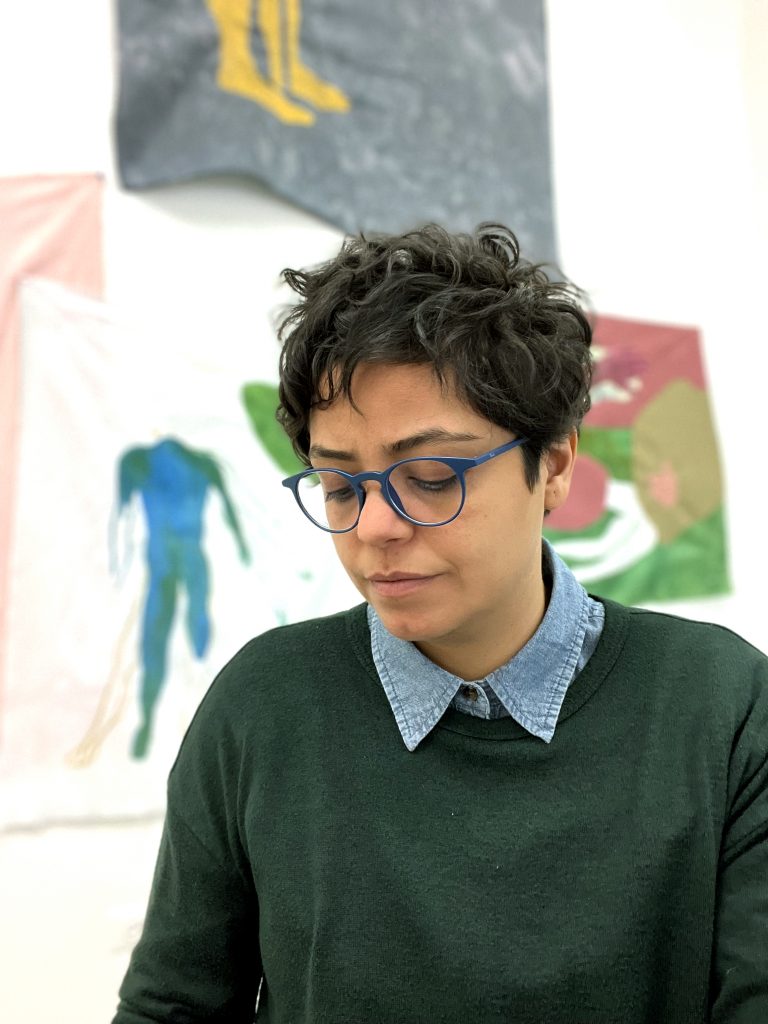 I’ve known Elnaz Javani’s work since 2015, when she received an MFA in fiber and material studies from the School of the Art Institute of Chicago. Bold but subdued, somber yet supple—those were my first impressions from the encounter. Elnaz works with drawing, textiles and installation, producing series resulting from excavations of her own memories and the investigation of materials. 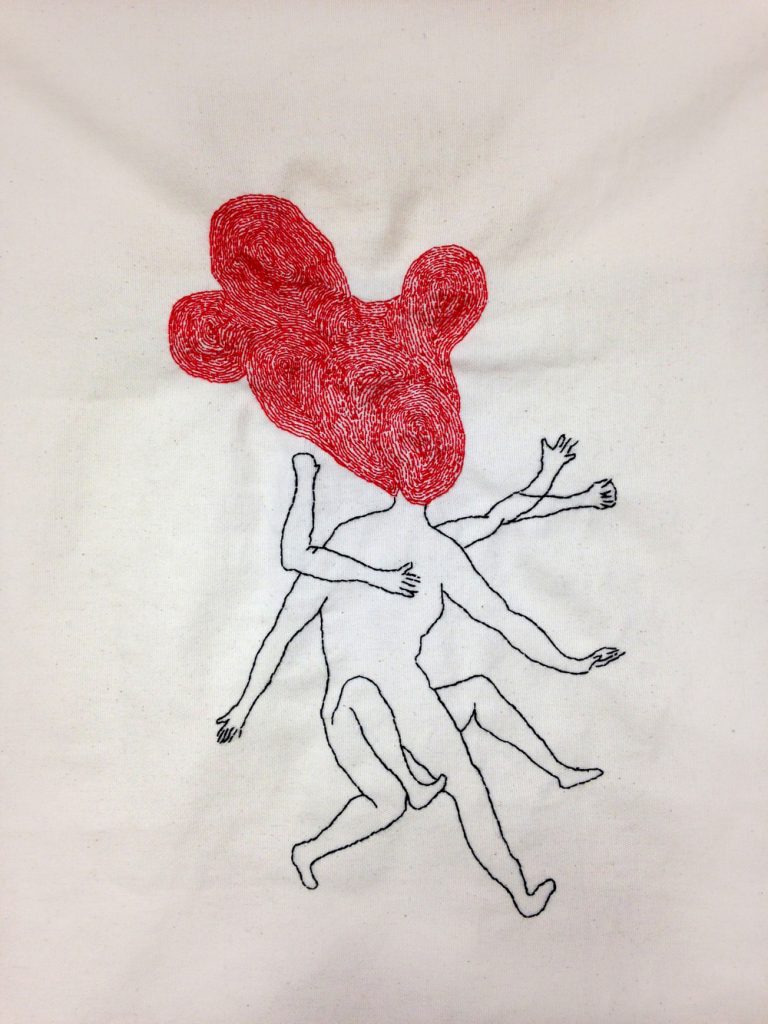 These efforts culminated saliently in “Inner Compulsion,” her fifty-eight-piece hand-embroidered muslin series made between 2013 and 2019. The artist presented these works in her 2019 solo exhibition at Oggi Gallery, where the pieces were pinned on a maze of movable walls. Black stitches demarcate the outline of the figures; red stitches swarm into a blob that often replaces the head or connects two separate bodies. Quiet but latently disturbing, these embroideries are a collection of stories on how multiple identities can live within one body. More deeply, they suggest a state of being where the mind is not in full control of the body. “It’s like when you are drowning, your body moves more. It’s survival mode,” Elnaz says. Elnaz’s work is a metaphorical representation of just that. Sewn to the raw surface of muslin, the imagery makes the viewer scrutinize human bodies and their movements: bodies under pressure, bodies that intuitively resist or bodies that struggle to cope with the environment.

Elnaz started her artistic exploration elsewhere—while pursuing a BFA at the University of Tehran, she was traditionally trained as a painter. She spent some years honing her techniques with oil and acrylic, which constitutes a large portion of the curriculum, but she found herself unsatisfied by the paintings in progress for her graduation show; she made a radical switch to working with textiles. 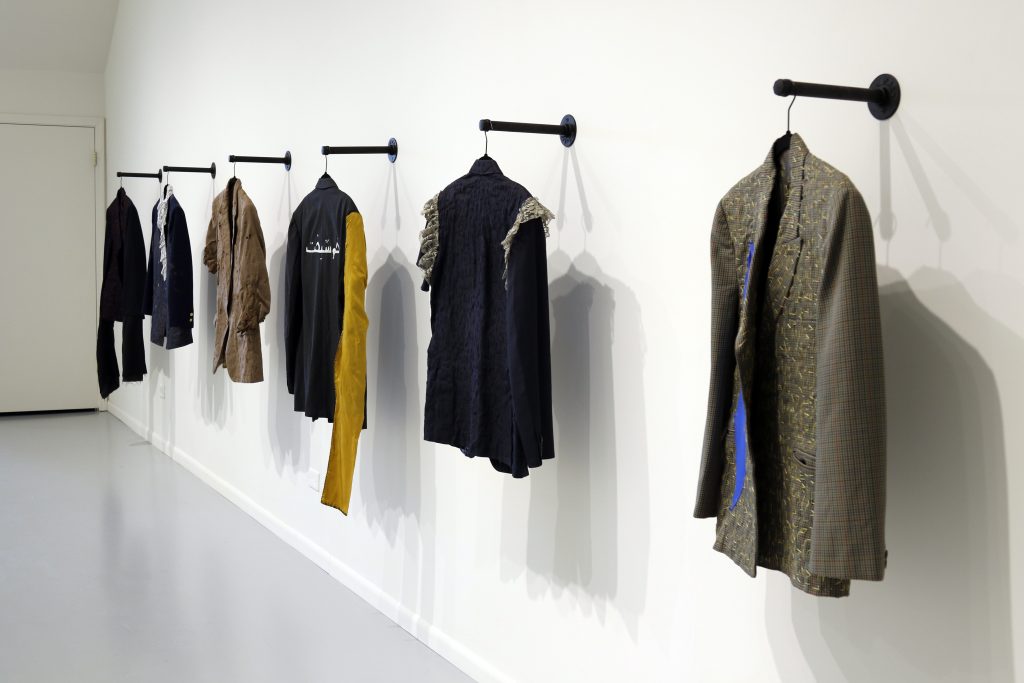 Installation view of “Fate”, 2019, of the artist’s solo exhibition, “Your Residue,” at One After 909 in 2020, coats, cloth, resin, with hand-sewn embroidery, dimensions variable

Elnaz attributed her predilection for working with textiles partially to her upbringing: her father’s influence as a general manager at a fashion school that offered sewing and pattern-making classes. She was surrounded by fabrics and textiles. But there’s something more specific about the medium of sewing and the softness of the fabric that speaks to Elnaz’s personality. Exposed to feminist writings and involved in the women’s rights movement in Iran during her last years in college, Elnaz was less interested in revamping the stereotypical association of textiles to the notion of femininity than in how the metaphors of sewing and embroidering may relate to her conceptual interests of endurance, resistance, seeking security and comfort, or grounding oneself within a politically volatile environment. 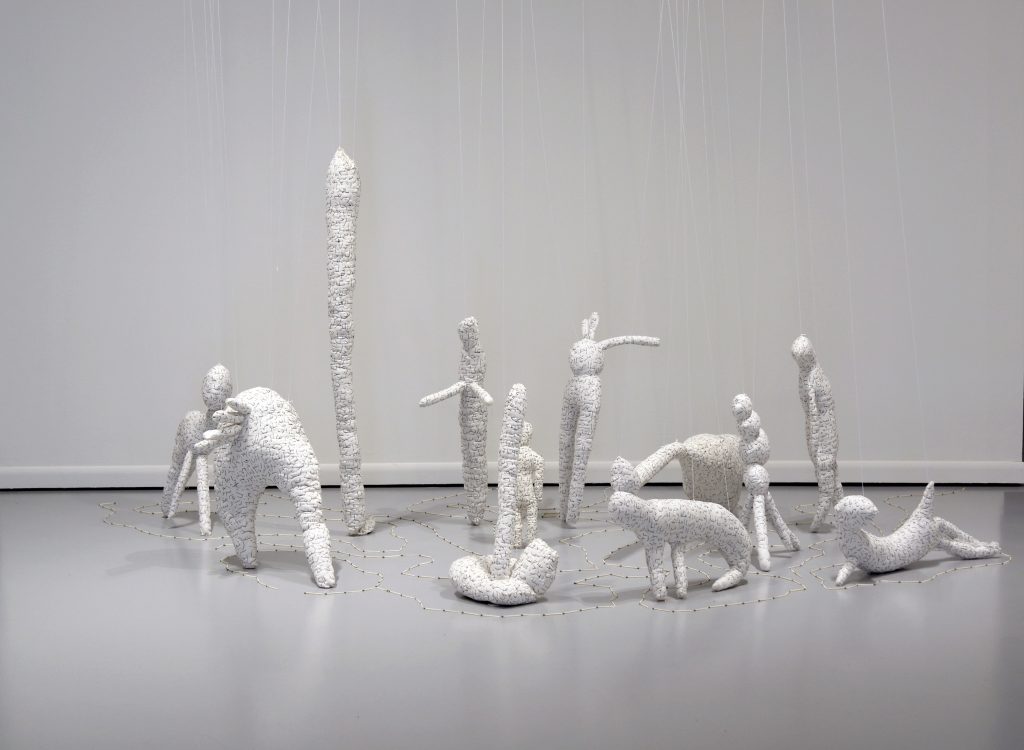 Installation view of “My Effigies,” 2019 from the artist’s solo exhibition, “Your Residue,” at One After 909 in 2020, stuffed objects made of white muslin fabric; hand-sewn black threads cover the outer layer with stories in Farsi & Azari calligraphy, dimensions variable

It was through these turmoils that the artist created the series, “Fate” (2011), which consists of more than a dozen found men’s jackets that she embroidered with fragmented Farsi and Azeri words. Growing up in an Azeri-speaking household in Farsi-speaking Tehran, Elnaz understands the different perspectives and identities that can be formed through language: “The fragmented Farsi words relate a lot to growing up bilingual, and that’s why they look really primitive.” Elnaz made new pieces as part of the continuum of “Fate” after her relocation to the United States for graduate school in 2013, where issues such as displacement and alienation linger for her. These jackets, along with newer sculptural work of similar embroidered pattern, “My Effigies” (2020), were featured at her serenely installed solo show at One After 909 in 2020, which opened right before the COVID-19 travel ban. Her works hit the target in a swift and hard punch.

Elnaz is a recipient of the Spark Grant by Chicago Artists Coalition, Kala Fellowship Award and Define American Fellowship Award. A teacher in SAIC’s fiber and material studies department, Elnaz is experimenting with dyes and heat press, producing a body of manipulated surfaces that is unprecedentedly colorful. These works will premiere as part of her exhibition, “Phonetic Fragments: Azadeh Gholizadeh & Elnaz Javani,” opening at Roots & Culture on March 11. (Nicky Ni)