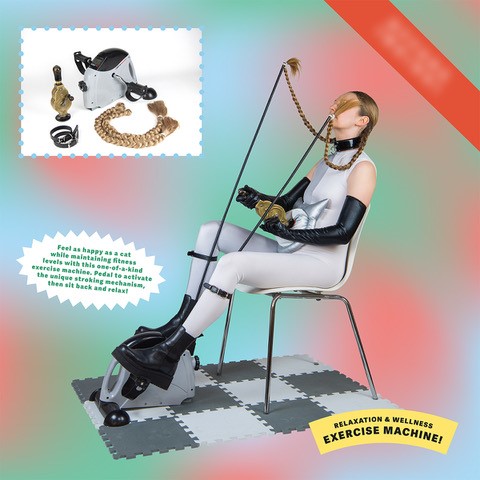 Rosie Gibbens, “The New Me,” 2022/Image: Courtesy of the artist and Data

In 2017, the School of the Art Institute of Chicago presented Mexican artist Emilio Rojas’ performance at their booth at EXPO Chicago. “Memorial to an Unbuild [sic] Monument and/or A Litany of Reduction” was a shocking five-day durational performance, for which the artist finished a wall drawing of the never-realized monument for the 1893 World’s Columbian Exposition. Done while nude, the artist put his body of color on display; what was also laid bare was the colonial history behind the world fair’s extravaganza and its connection to the art fairs we know today. Fast forward to 2022, after the pandemic has reshaped our life, increasingly strengthening our stake and involvement in the digital world, EXPO Chicago, for the first time, included a section dedicated to digital art as part of its site-specific program IN/SITU. Overt representations of the human body are once again put on display—and this time, digital bodies as well, seamlessly woven into the greater fabric of the art fair and its transactional nature.

Using absurd inventions or useless commodities that she conjures by appropriating everyday objects, British artist Rosie Gibbens specializes in producing deadpan yet latently kinky and erotic performances. Represented by Daata, an online platform for contemporary digital art, Gibbens premieres her new body of work “The New Me,” 3D-animated NFTs that take the form of parody commercials for goofy cleaning outfits or ludicrous makeup machines. Her three-channel video installation at Daata’s booth is a documentation of the artist performing with these useless gears using her own body, which she abjectly treats like an object. Subversively, here her body becomes a replacement for the genderless and seemingly “neutral” digital bodies sold through the NFT drops.

Keiken in collaboration with George Jasper Stone, Elon Musk, Grimes and X Æ A – 12 (from “Wisdoms for Love 3.0”), 2021, augmented reality/Image courtesy: the artists and Daata

But digital bodies are never neutral. The popularization of 3D modeling and animation software allows the virtual environment to be a playground for experimenting with representations of human bodies. Artists such as Jacolby Satterwhite, Katie Torn and Morehshin Allahyari take advantage of this liberating nature to explore gender fluidity and the queering bodies. But this openness is not without cost. Digital bodies are also subject to visual exploitation, abuse and other explicit treatments that wouldn’t be possible otherwise. The video game and virtual porn industries are good examples. Using her own body to lay bare the power and perversion we have toward digital bodies, Gibbens uses the art fair to further contextualize her cynical embrace of capitalism, where everything is for sale.

A few augmented reality (AR) pieces within IN/SITU also involve representations of humanoid figures. This section is lurking as QR codes; participants can access the artworks via smartphone apps and superimpose the AR works on anywhere they’d like. One of them is by Keiken, a female threesome that works from London and Berlin. The artists extract the main characters—3D portraits of Elon Musk, Grimes and their baby X Æ A-12—from their 2021 art game “Wisdom of Love 3.0.” Like intangible dolls, the characters are seen to have transparent bellies, a harsh metaphor for the media’s consumption of celebrities’ domestic life. With gray skin and a pair of iridescent wings, Grimes is portrayed as a divine goddess upon whom we bestow our fantasies of love, of the unforeseeable future and of whatever technologies (digital and beyond) can get us there.

The question of “Is the digital divine?” is echoed by Chinese artist Xu Wenkai, more commonly known as his username aaajiao. The AR version of “Totem” is pulled from the artist’s video game “Deep Simulator” (2020). A totem, which can take the shape of a figurine, carries spiritual or emblematic significance. The human figures in aaajiao’s work resemble a Buddhist deity as depicted in a Tibetan Thangka—albeit a lot more minimal and subdued. When one opens the artwork on a phone, the digital bodies seem to be caught in a volatile state, manifesting their tendency to glitch into unwanted, abstract polygons—a collector’s nightmare. Aligned with the artist’s continued investment in challenging the limitation of the digital mediums and their social construct, “Totem” appropriates the divine body and uses it as a vessel to reiterate the paradox about the mediums themselves: that they are, on the one hand, a depository of our unrealistic desires for juvenility and boundless access, and on the other hand, remaining to be appallingly unstable. (Nicky Ni)

Learn more about the IN/SITU works at expochicago.com/programs/in-situ