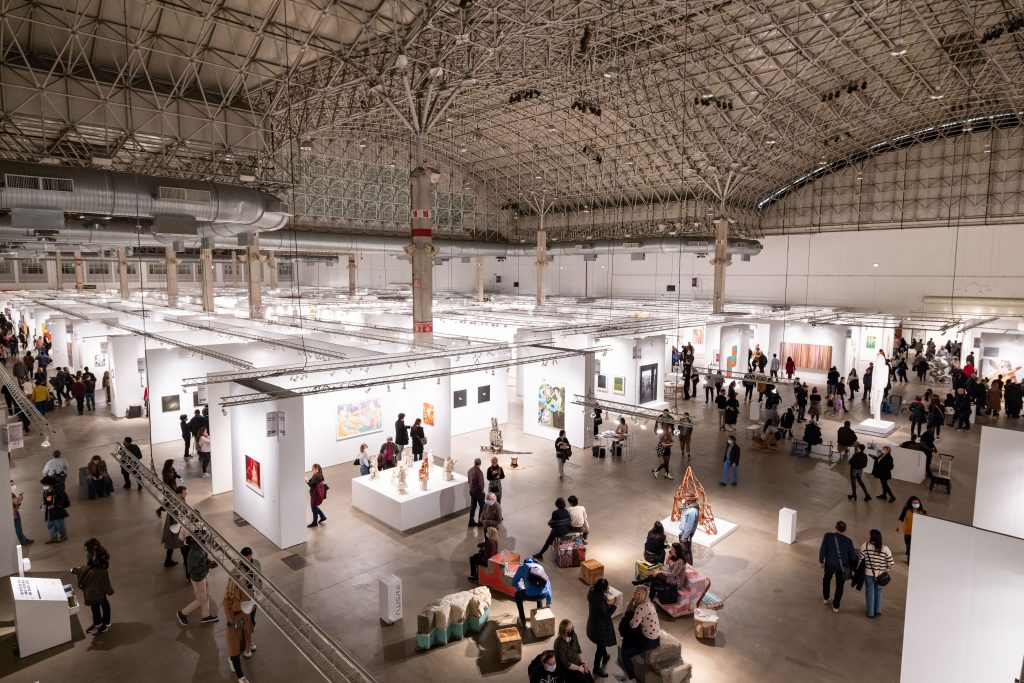 In “Waiting for Godot,” Samuel Beckett writes, “Nothing happens. Nobody comes, nobody goes. It’s awful.” It’s a clear-eyed assessment of the main characters’ united condition: the plight, the frustrations, the indignities of being a human in the world. A reader might assume a certain comfort in sharing these pains with others, the knowledge that you’re neither alien nor special but simply together in common struggle. No such comfort was to be found at the Art Critics Forum at this year’s EXPO. Nor should there be. This forum, part of the EXPO’s /Dialogues series, was exactly what it presented itself as, a reflection of the system it purported to challenge. The question of the forum, “What is Art Criticism’s Job Today,” is an empty aesthetic gesture ultimately dictated by the whims of the market. Moderated by Sarah Douglas, the editor-in-chief of ARTnews, we began with a distinction between the concepts of an artwork’s market value and intrinsic value; the second being the critic’s duty to interpret for an audience. Yet what is to be done in the age of neoliberalism when the two are impossibly linked? None of the three critics on stage offered a satisfying answer. Yet, who could?

Panelists Britt Julious, Max Lakin and Jillian Steinhauer (with Mary Louise Schumacher unable to attend due to COVID) all ostensibly represent varied corners of the art world, with both Lakin and Steinhauer primarily freelance, and Julious both freelance and the Chicago Tribune’s music and nightlife critic. However, in Schumacher’s absence—Schumacher, now freelance, was the art and architecture critic for the Milwaukee Journal Sentinel prior to pandemic layoffs—Lakin, Steinhauer and Douglas (by extension) are all primarily based in New York. Julious was the lone Chicago critical voice. While I appreciate the inclusion of Julious’ work in its explorations of criticism’s debt to community, art’s ephemerality and precarity, it was an odd choice for Douglas to task Julious to defend Chicago’s status as an “art city.” When the conversation between the two turned to ideas of the inter, trans and non-disciplinary making that originated from the 2020 protests, it made me wonder. What could happen if we stretched, teased and challenged the boundaries of arts criticism, of arts writing, instead of having discussions on the complexities of writing for the New York Times and a few self-consciously, self-effacing jokes at “not being treated like Roberta Smith”? In another world, a better world, could arts criticism indeed interpret an artwork’s human value, teach what it could be to connect with one another, to wait for Godot together?

While the forum ranged from topics as wide-ranging as the 2020 protests, cancel culture in the arts, the COVID-19 pandemic and the material inequalities the art world is built upon, no topic was given more than a light, cursory, gloss of acknowledgement. At one point, there was reference to an axis posited earlier in the EXPO, the twin trends of hyper-localization and deglobalization. The reference was again meant to be a nod to both Julious and Schumacher’s, in absentia, inclusion as Midwestern critical voices. Yet, this seeming nod to “local” community is once again an ill-researched gloss over. For instance, in the trailer for Schumacher’s upcoming film on art criticism presented in the forum’s final minutes we are treated to cameos by none other than Roberta Smith and her husband Jerry Saltz (the critic who makes more money being “horny on the main” than most of us reading make in a month). The forum would have been better served to think through and center the questions of capital, data and carceral logic attendant to de/globalization through local voices such as The Blackivists, in c/o Black women and more broadly the Black Metropolis Research Consortium.

In reference to an earlier conversation with Chicago critic Lori Waxman on writing and reading arts criticism, a panelist asks Waxman the question, “Does anyone care?” This, the proverbial question of the hour, went unanswered. (Annette LePique)