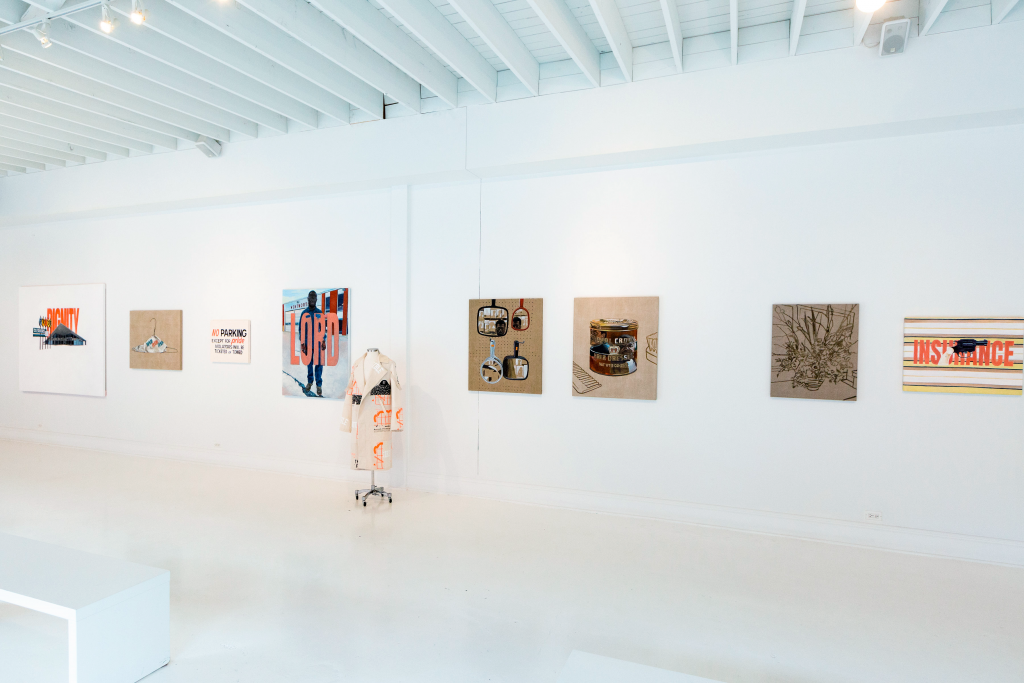 For Brandon Breaux’s extraordinary debut U.S. solo exhibition, the Chicago artist revisits Chatham, the neighborhood where he grew up, and the places and language that shaped his identity. Incorporating painting, print, fashion design and installation, the show, curated by Anna Cerniglia and Alison Cuddy, reveals the capabilities of an artist at the top of his game.

Wall text explains that the investigation into Breaux’s past began when he bought his grandmother’s house, in 2017, and worked to renovate the building. The first piece in the gallery is a mirrored medicine cabinet, ostensibly from the house. It’s wearing away at the borders, its edges painted baby blue and with scraps of old wallpaper clinging to the back. Depending on where you stand, you may be able to read the words “Know Thyself” in the mirror—they’re painted backwards on the opposite wall, behind a clothesline where pants designed to mimic the Pan-African flag hang. It’s a poignant and clever reference to Breaux’s desire to understand the shape of his own worldview.

Three stunningly simple oil-on-linen paintings pay respect to Pride Cleaners, on East 79th Street, a futurist architectural icon that was once a successful, Black-owned business. “Artifact No. 1” delicately depicts one of  the cleaners’ wire hangers, papered in the “Pride” logo. Other paintings tenderly reference hair care. “I Can Never Get Waves” shows a grid of hanging handheld hairdressers’ mirrors, the silhouettes of patrons considering their cuts reflected in one. There’s a subtle balance in these works between what items get rendered in full color, and what remains in outline on the raw linen. A can of Royal Crown Hair Dressing is richly imbued with oils, near a comb which lies flatly illustrated. 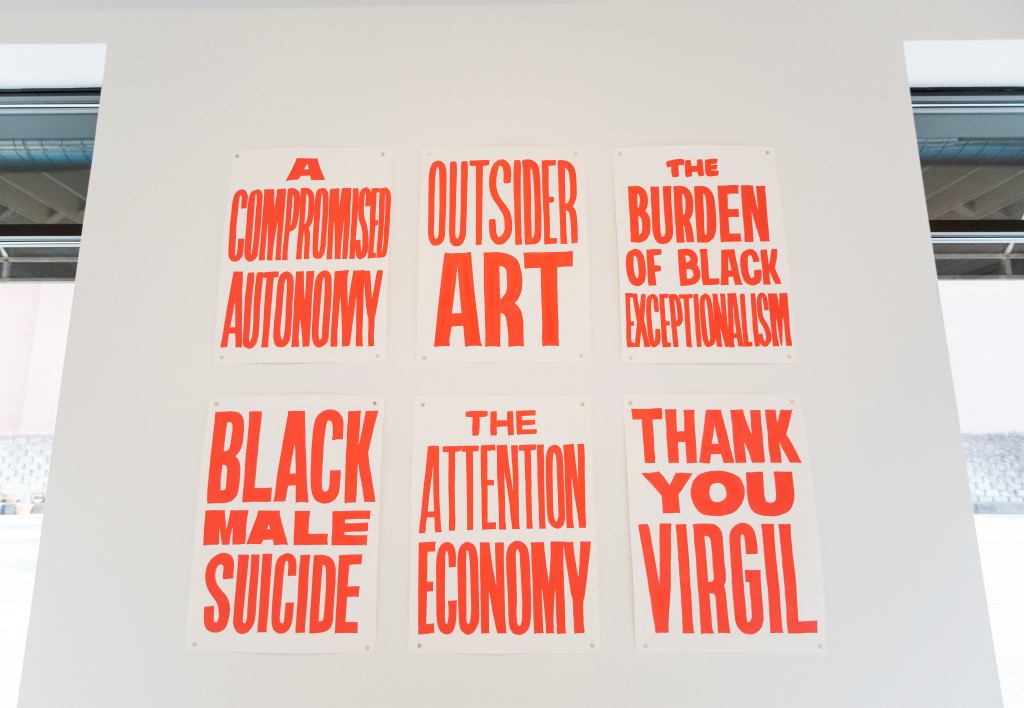 On the opposite wall hangs a grid of six oil-on-paper works. Bearing bold messages in blood-red paint, they mimic the handmade signs of protesters or the declarative typeset advertisements from the turn of the last century. “Outsider Art” reads one, “The Burden of Black Exceptionalism” reads another. As an artist who also works frequently in the commercial art and design worlds (Breaux is perhaps best known as the artist behind Chance the Rapper’s album art), Breaux is well-versed in how to make meaning pop, how to balance message and visual identity. These pieces are perhaps an indication that the artist feels the tension between his myriad commercial projects and the capital-A art world, as if that world doesn’t also revolve around creating value in a prescriptive marketplace.

It is clear that community is paramount to the artist, who gives back to the city in numerous ways—through a project that brings schoolkids to museums, through public messaging efforts to raise awareness about COVID vaccination. Even his desire to stay rooted in Chicago is a notable one, when moving to New York or L. A. might prove more fruitful to his career. In an interview, the artist once called appreciating one’s community “invaluable.” Which is why staging this solo presentation at Blanc, which aims to nurture culture in homage to Bronzeville’s rich heritage, is so fitting. In “Big Words,” Brandon Breaux explores his Chicago roots in a tangible way, with pride and integrity; the city is lucky to have him. (Kerry Cardoza)