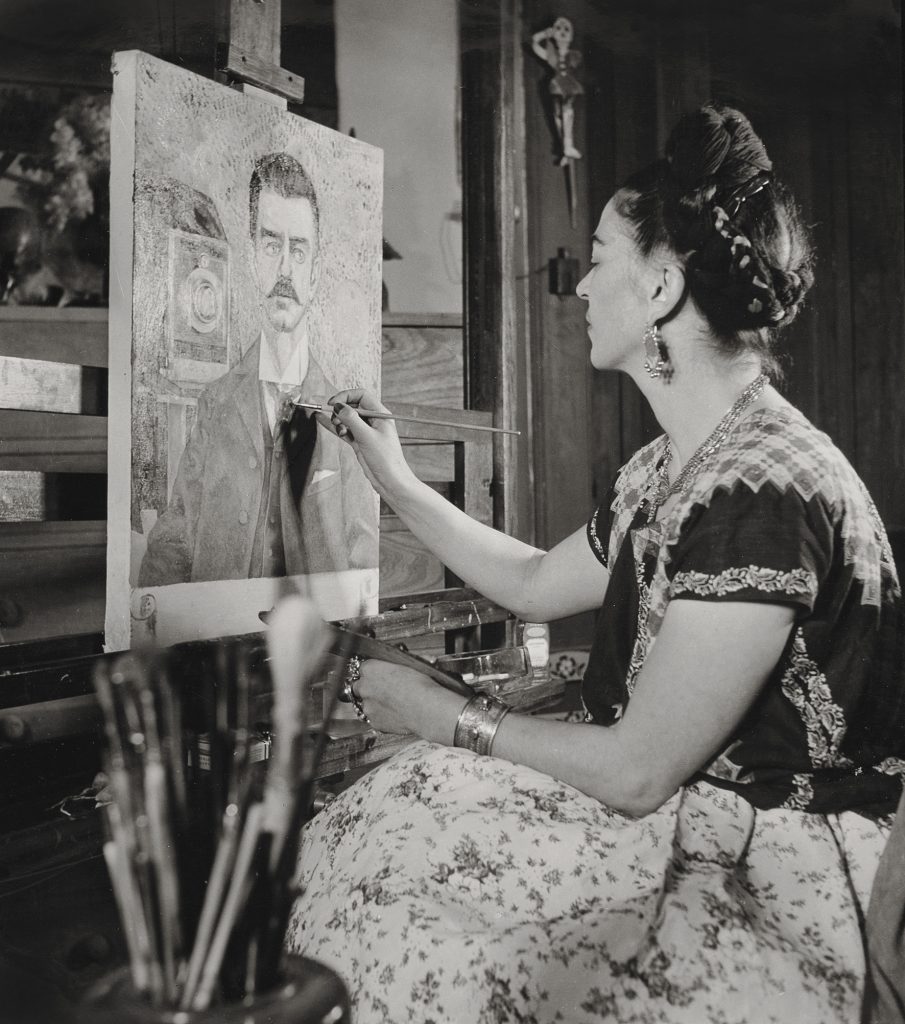 Frida Kahlo grew up immersed in photography. Her father, Guillermo Kahlo, was a photographer, as was his father before him. In her personal archive, Frida kept self-portraits that her father made—in some, he’s seated formally before the camera, in others he’s outdoors, striking a jaunty pose, one shows him looking somber, after a crying spell. It’s clear he understood the power of image-making, of identity-making. Throughout Frida’s early life, Guillermo also took scores of photos of his family. In these images, we see the iconic poses for which Frida is known start to emerge. Here we see her, around age twelve, gazing unsmiling into the lens, or age nineteen, her expression fearless, her head turned just so.

In “Frida Kahlo: Her Photos,” on view at the National Museum of Mexican Art, more than 200 personal, unpublished photographs from Frida’s archive show the development of the artist’s identity, her personal interests and how the medium influenced her painting. Upon Frida’s death, her husband—artist Diego Rivera—made plans to donate her house and belongings so they could be preserved as a museum. One provision was that many of their personal effects remain locked away for a number of years following his death. So it was that these photos, and many other items, were not unearthed until 2003. This exhibition, curated by historian Pablo Ortiz Monasterio, is a small selection of the more than 6,000 photographs that Frida kept. 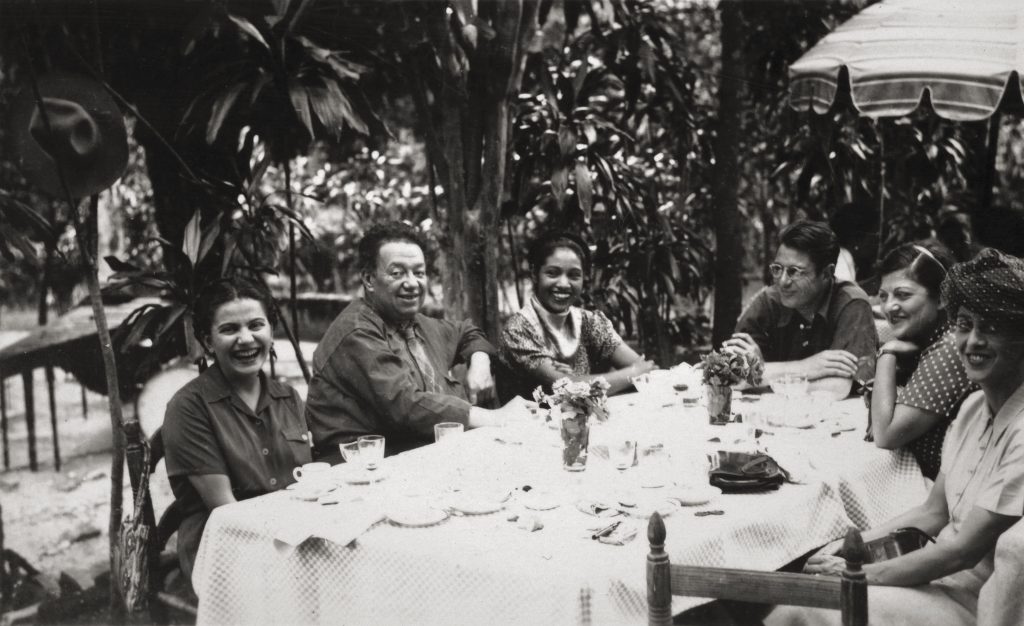 The exhibition, which has been traveling since 2009, is divided into six sections: The Origins; The Blue House; Politics, Revolutions and Diego; Her Broken Body; Frida’s Loves; and Photography. The organization is thematic, not chronological. The majority of photos here aren’t credited to the artist herself, instead many were taken by Frida’s family and myriad lovers and friends—including some from such notable photographers as Man Ray, Tina Modotti and Edward Weston. 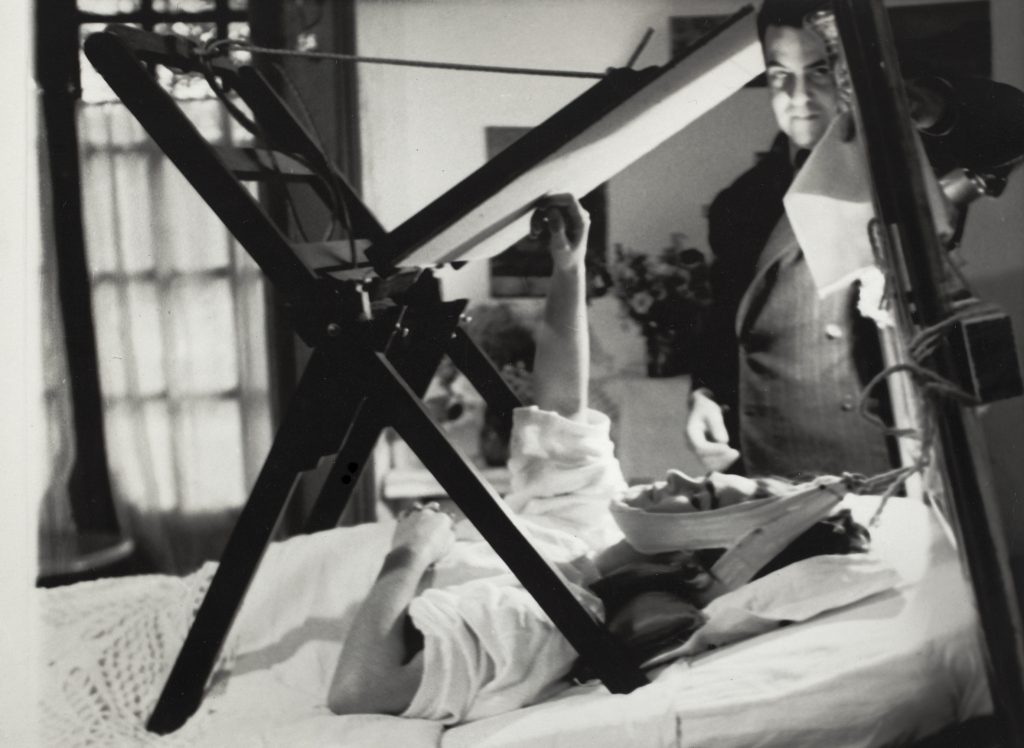 Frida painting in her bed, Anonymous, 1940. Miguel Covarrubias stands by her side, Frida Kahlo & Diego Rivera Archives. Bank of Mexico, Fiduciary in the Diego Rivera and Frida Kahlo Museum Trust

As a young person, Frida wasn’t planning to become an artist. She was interested in science, and was preparing to study medicine when her future was derailed by a bus accident. Laid up in bed for months, her pelvic bone and spinal cord fractured, along with other fractures in her leg, ribs and clavicle—she turned to painting. Her mother commissioned an easel that would allow Frida to paint while laying down in bed and the career of one of the most renowned artists of the twentieth century began.

Frida had many health complications, related in part to the accident, throughout her life. She often painted from photographs as this was more physically accessible to her than working with models or from life. Here, we see Martin Munkácsi’s photo of a black cat, with its back arched, which shows up in Frida’s “Self-Portrait with Thorn Necklace and Hummingbird,” as well as a small image of a deceased child, which served as the basis for “The Deceased Dimas.”

The exhibition also makes plain Frida’s involvement in communism and her deep love for her country. Frida was known to have hung portraits of Marx, Engels, Lenin and Mao near the foot of her bed, here we see portraits of Trotsky, Lenin and Stalin, as well as photos of the Mexican revolutionary Emiliano Zapata. One of the few photos that is attributed to Frida is of a papier-mâché Judas, lying on its side in the sun. 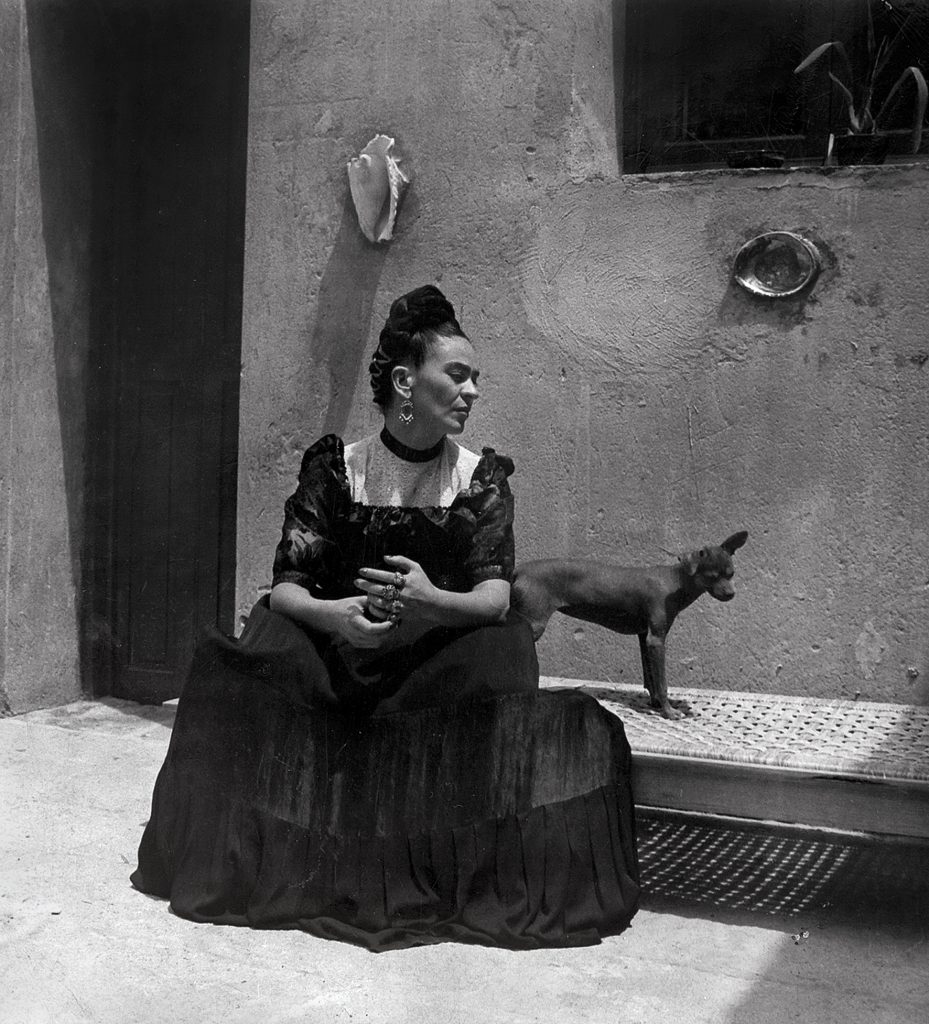 It’s impossible to look at these images and not think of our own current obsession with image-making. It’s hard to go anywhere vaguely visually appealing and not see someone staging their own mini-photoshoot, crafting the life story they’re putting out into the world. We all know our angles. Indeed, many of the images here give the impression of an Instagram post, such as the square-shaped shots of Frida and her smartly dressed friends lounging outdoors on a blanket, or the sultry portraits sent to Frida by various romantic partners. Frida even seems to have presaged “likes” and captions—some photos bear her lipstick kisses, others explanations or rewritten histories, such as in some places where Frida shaves a few years off her age. Another section includes photos where some people have been cut out of the frame—perhaps due to a falling out, as today we commonly crop out or Photoshop away unwanted elements.

At a press preview, Cesáreo Moreno, the museum’s director of visual arts and chief curator, said that he hopes that the exhibition will help people understand how Frida became so celebrated, the rare mononymic artist. “A lot of times when somebody in history becomes an icon, their story gets simplified,” he says. People might know Frida by her Tehuana dress, her bold self-portraits, her turbulent relationship with Rivera or her devastating health problems—but her life was much fuller than that. “This exhibition really brings out the complexity again, and really helps shed light on places and ideas and events that are not as obvious,” Moreno says. Indeed, this exhibition is worth visiting if only to glimpse these lesser-known sides of Frida—her sitting outside, her hair down, dressed casually and smoking a cigarette; her partially dressed, laying in her sick bed, gazing languidly at the camera; her looking pensively out of a bus window. 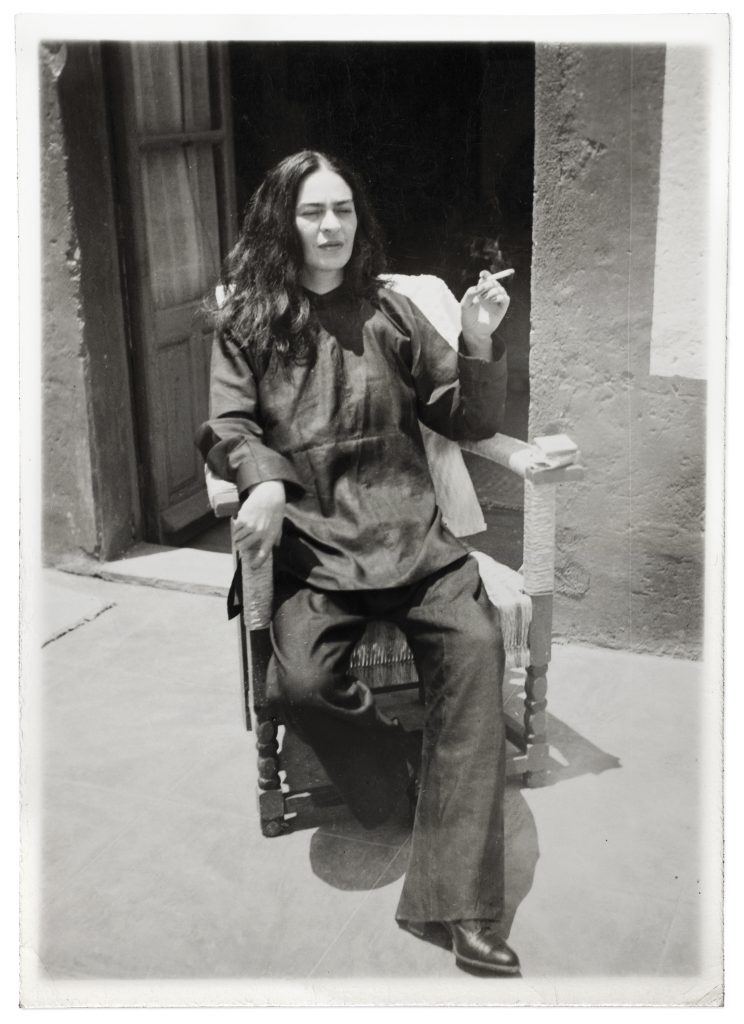 The artist once wrote of having her picture taken: “I knew that the battlefield of suffering was reflected in my eyes. Ever since then, I started looking straight into the lens, without winking, without smiling, determined to prove I would be a good warrior until the end.” And that, too, is the image we get of Frida from her paintings: stoic, unafraid. But it’s important to remember that even that was a decision, to edit her life and her visual identity so that the viewer would have a certain impression. As we do today, Frida sought to control her image—this exhibition wrests that control away, if only in glimpses. (Kerry Cardoza)

“Frida Kahlo, Her Photos,” at the National Museum of Mexican Art, 182 West 19th, through August 7.