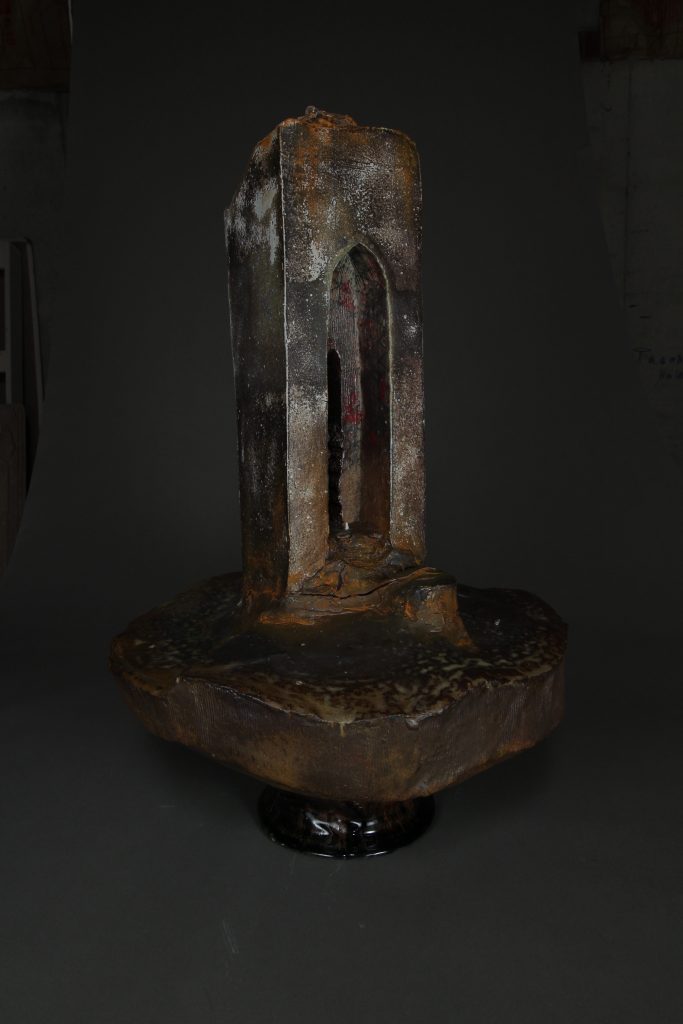 Jonathan Pacheco has worked as a ceramic artist for fifteen years, exploring clay as a time-based medium and as a means of storytelling shaped by the creator’s hands. He makes abstracted sculptural work and masterful functional objects, experimenting with both soda and wood kilns. A graduate of the University of Illinois at Urbana-Champaign, Pacheco teaches ceramic courses at Lillstreet Art Center and Lisle’s Clayspace. Pacheco spoke with Newcity about his practice, how science drew him to art-making and his exhibition at Aurora’s Artesan Loft Gallery.

What drew you to ceramics?
Science and curiosity. I actually was a biochem major before switching into the fine arts at University of Illinois, Urbana-Champaign. I took a Macromedia Flash art class for non-art majors and I was hooked, I was creating worlds again. Before that I had only taken one art class as a kid. I continued my art journey and took ceramics and metal smithing jewelry, and they fulfilled my curiosity and need to experiment. Those two forms of mediums have so much science in them. I had so much fun creating, experimenting and learning.

Are there any particular artists that inspired you?
I grew up learning of Picasso, Dali and Frida. Frida has a special place in my heart, such an incredible woman. I also like work by Egon Schiele and Richard Serra. Some contemporary ceramic sculptors that I admire are Cristina Cordova, Scott Ross, Zoe Powell, Eric Ordway. 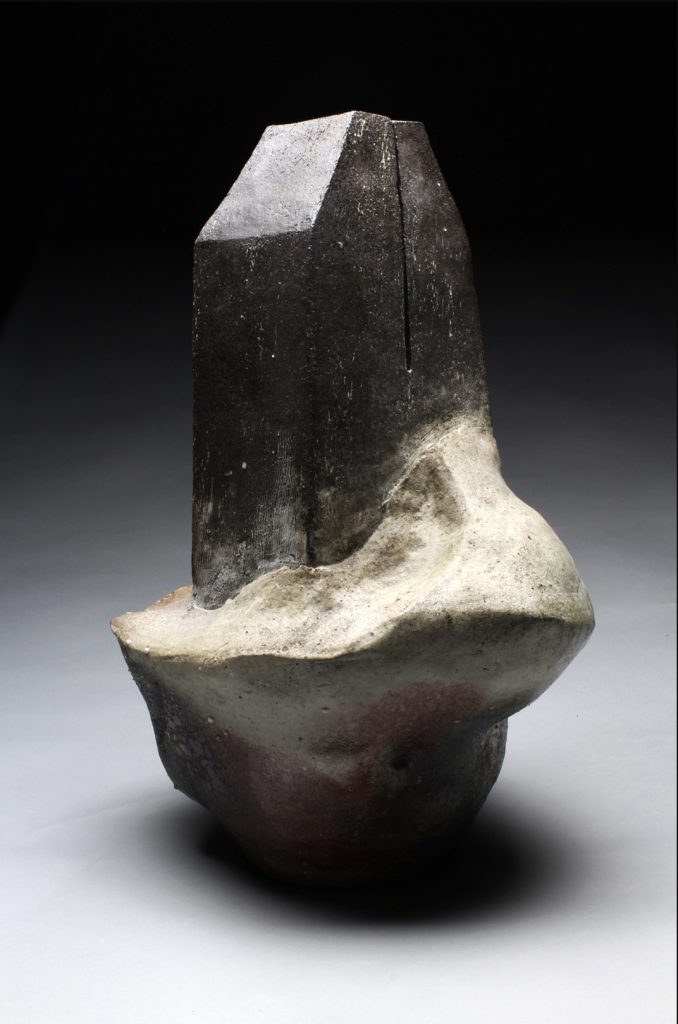 You make both functional and sculptural objects—do you see them as totally different practices, or do they feed into one another?
My sculptures definitely have a narrative to them and are personal. My functional ware comes with more freedom to experiment with the material. I find that I need both sculpture and functional objects in order for me to have balance in my creative mind.

What’s your studio practice like?
I typically have many projects going at once. Throwing, handbuilding sculpture work and functional work depending on what my body feels capable of doing. When it comes to starting a sculpture, I usually sketch out ideas to make sure I really want to make it. Sculptures can be mentally and emotionally draining for me.

Do you typically work with the same type of clay and firing methods?
My clay is usually a dark clay body with iron and a lot of grog. Grog is already high-fired clay so the clay won’t shrink as much. I also like the texture that comes from it. I call my clay “Gumbo” because it sometimes has other commercial clay scraps in it that all go to Cone 10. I also make my own slips that I dip, spray or brush on to add some layers of color and texture. I typically fire in a wood kiln or soda kiln, where the flame adds to the piece. You get to glaze with the path of the flame. Woodfiring ceramics has been such a treat to do and learn, it keeps me on my toes. 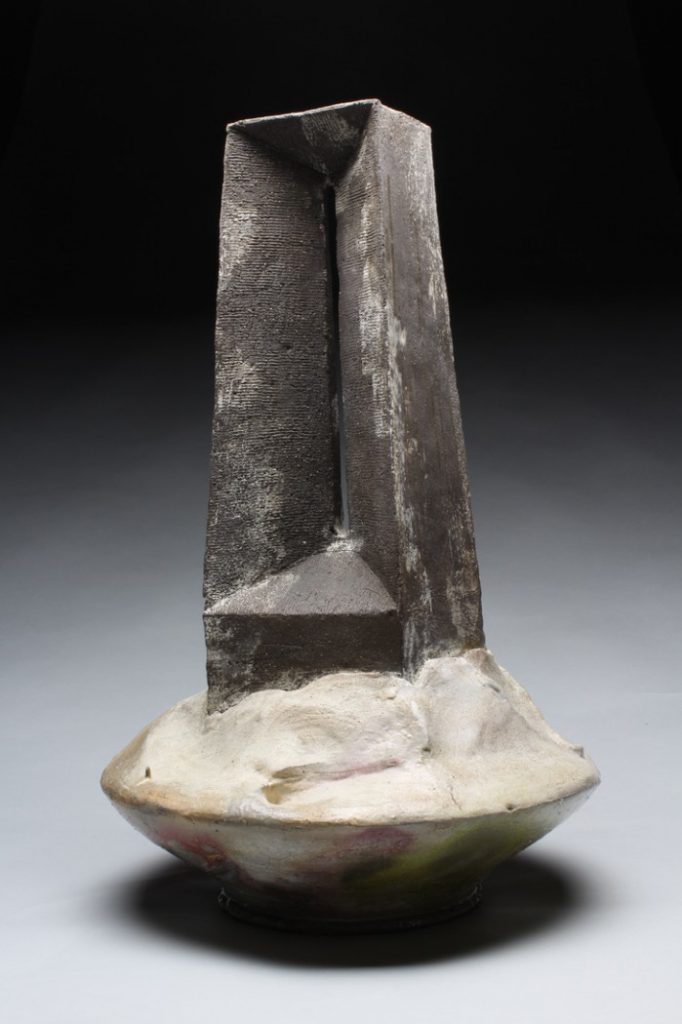 Can you talk about your Traveler Series? How did it come about and what’s the idea behind it?
The “Ruin and the Traveler” series started about ten years ago because that’s when I learned about woodfiring. Woodfiring allowed me to get the surfaces I always wanted in a sculpture, a look of something rustic and weathered. I imagined myself finding a towering monolith that seemed out of this world with no clues. A sense of excitement and sadness fills me. Excitement to have discovered something amazing, sadness for not being able to share it with someone. It’s a narrative of my own depression and struggles I have in life. I’m thankful for learning about woodfiring to be able to express my sculptures the way I imagined them.

Do you have any projects you’re working on, or events coming up?
I am working on many new things, a new series I am calling “Artifacts” and “Self.” I have a show opening June 3 in Aurora at the Artesan Loft Gallery. I’ll be showing my sculpture work “Ruin and the Traveler” series.

I am also hosting a pottery tour that I have been helping organize. The Northern Illinois Pottery Tour will happen at the same location in Aurora and at Villa Park, Sandwich and Chicago, all on June 11 and 12. You can find more info at northernilpotterytour.com.

“Jonathan Pacheco: Ruin and the Traveler” opens at Artesan Loft Gallery, 2 South Stolp, Aurora, on June 3. Follow the artist’s work on Instagram @pacheco_jon or at jonpacheco.com.