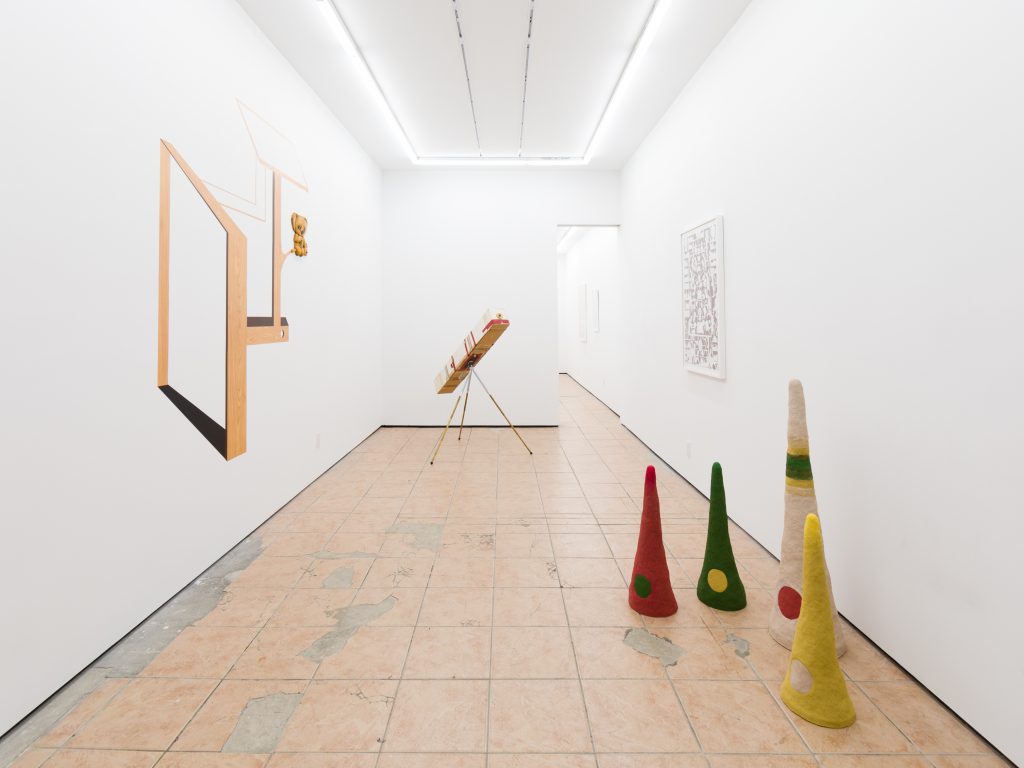 Is there any appliance more mesmerizing than the microwave? You load an unassuming box, press a button, then stand back and watch your softly lit leftovers twirl slowly as it whirs.

Something similarly familiar and mysterious is happening in “Microwave,” showing at King’s Leap in New York City. Curated by Chicago’s HG Gallery founder Peter Anastos, “Microwave” features the work of Laura Davis, Mindy Rose Schwartz, Steve Reber and John Henley. These four Chicago artists emerged in the nineties and have remained in each other’s orbits as friends, studio neighbors and SAIC faculty. With the kind of resourcefulness reflected in many of the works themselves (after all, Anastos studied with Davis, Reber and Henley), the show offers succinct summaries of each artist’s individual program, while revealing curious associations among them.

Laura Davis’ sculptures incorporate both found and crafted elements the interactions of which engage the eye as much as the unconscious. Mindy Rose Schwartz’s works reference decorative domestic objects and exude a supernatural aura conferred by her consultations with an astrologer. Steve Reber seems deeply interested in the formal aspects of sculpture (scale, perspective, material), but at the same time resist formality with the inclusion of playful elements. John Henley’s vertically composed works on paper are populated by male figures performing mundane tasks, with references that range widely from Buddhist landscapes to Imagist figuration. 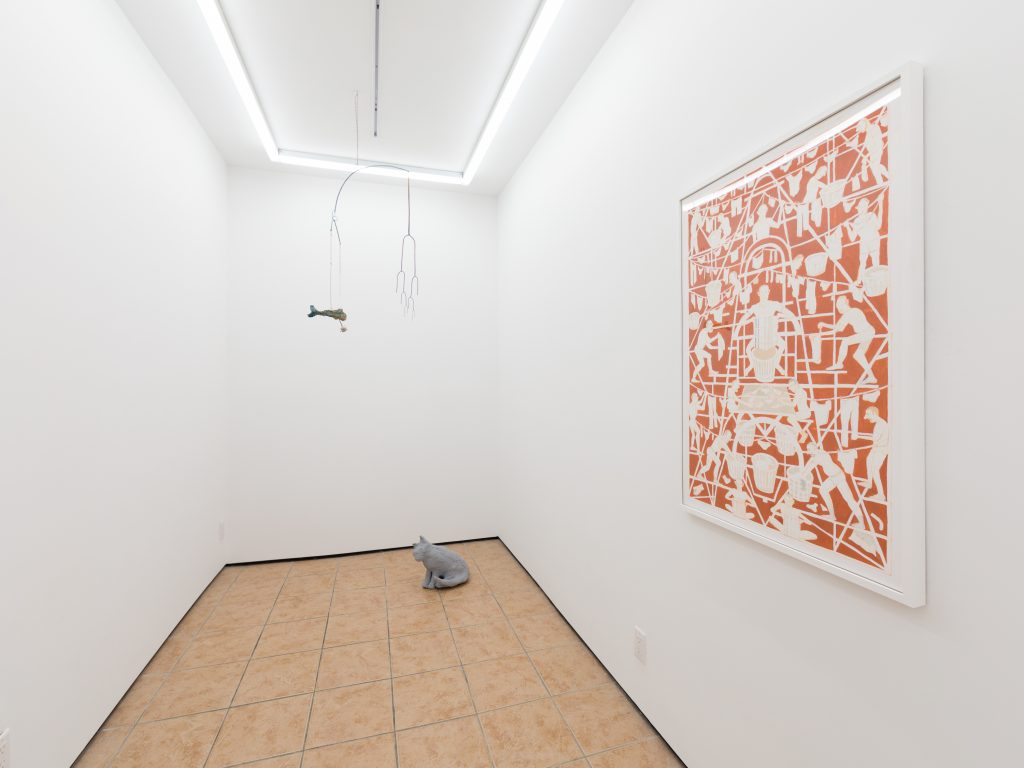 As distinctive as each artist’s work is, shared sensibilities emerge. For example, these serious artists have made some really funny work. Four supersized incense cones stand at the start of the show (Schwartz’s “Jupiter Cones”). The bright colors and pointy shapes call to mind wizard hats or garden gnomes, greeting viewers like droll sentries. Viewers are invited to lean over to smell the cones, and are rewarded with the scents of lavender, peppermint, lemongrass and sandalwood. Reber’s work “M. Koala” references Mies van der Rohe in the title, simple geometry and one-point perspective of the main form. Sprouting from this form is a branch supporting the kitschy relief of a koala, eyelashes for days. The piece plays with flatness and depth and is an adorable send-up to the master of minimalist architecture. Henley’s work also undermines the heroic. In “Fluff and Fold,” male figures are arranged in elegant symmetry as they wash, dry and fold clothes. Zooming in on the details, idealism cedes to funny outcroppings of body hair, wry facial expressions and lots of undies. Davis gives artmaking itself a playful nudge. In “Telescoped,” Davis includes the discarded poster box of the late Chicago lawyer, art collector and photographer Arnold Crane. Peering through the eyepiece, a viewer sees a crystal-clear reflection of her own eye. Gazing into our own gaze becomes a contemplation of art world narcissism.

As the kitchen appliance referenced in the exhibition title signals, these artists share an interest in—and perhaps anxiety about—domestic spaces and the rituals that occur there. Reber’s work references the forms and materials of mid-century spaces, like the plywood vinyl in “M. Koala,” and the furniture-like components and pantry staple in “Sugar Lift.” As Anastos points out, the open frames in Reber’s work at times suggest altars, but the kitschy objects he includes resist reverence. Schwartz’s sculptures, like the giant scorpions in “Dance of Love,” evoke maximalist hippie décor. They arrived at King’s Leap by way of a “Luck and protection charm ceremony on Friday, April 8, 2022 at 87w39, 41w51, Chicago, IL, USA,” that was performed with an astrologer. Schwartz made these works during the pandemic; is she looking to the cosmos to cope with COVID’s terrifying transformations of domestic life? The figures in Henley’s paintings may also be looking for relief through ritual labors, but their faces don’t convince a viewer that it’s working. Davis’ “Marketing Ploy 2” includes a miniature chalice with pins protruding, a ceremonial vessel rendered dangerous. 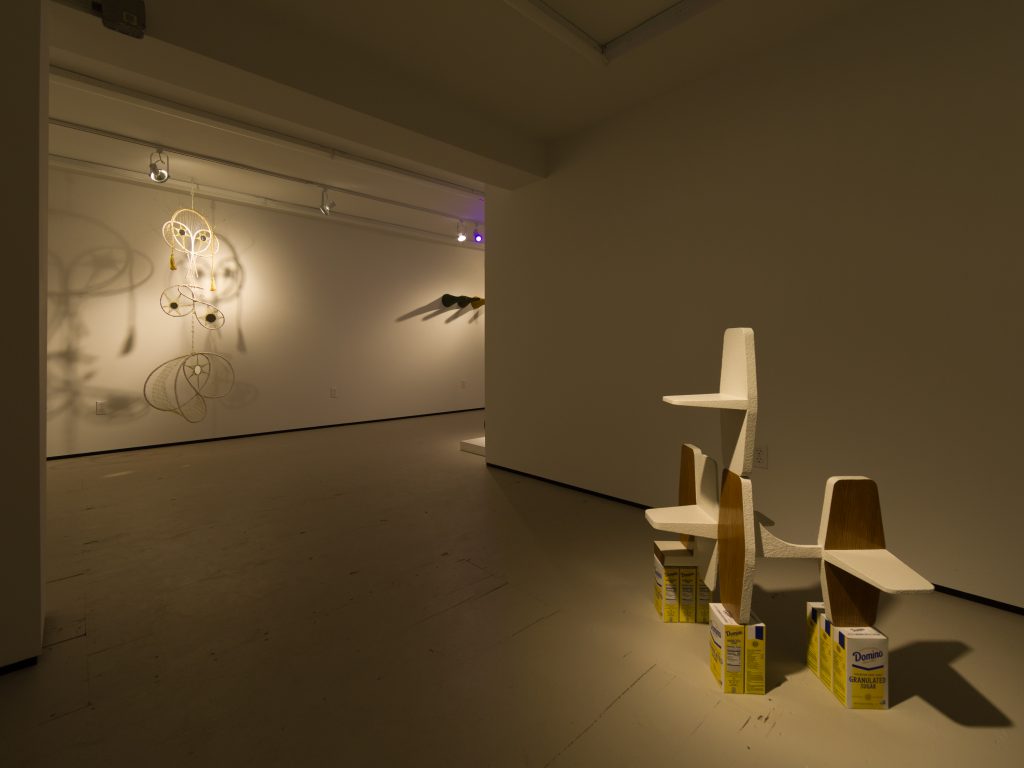 “Microwave” teems with links, puns and ironies. Davis’ “Telescoped” and Schwartz’s astrological pieces point to the stars. A fish and chalice dangle like charms in “Marketing Ploy 2,” just across the gallery from Schwartz’s works from a recent charm ceremony. Reber’s geometric sculptures resonate with Henley’s geometric backgrounds. Optical illusions are part of the fun of Davis’ book-like “Static Will” (are you looking at the outside cover or the inside text?) and Reber’s “M. Koala.” How fitting that a show with so much high-low interplay is the first show to appear in King’s Leap’s expanded space, which now includes both a street level and a basement gallery. As Anastos has pointed out, a layer of the show’s title sums it up well: these are all micro-waves, as in tiny hand gestures of connection. (Meg Reuland)