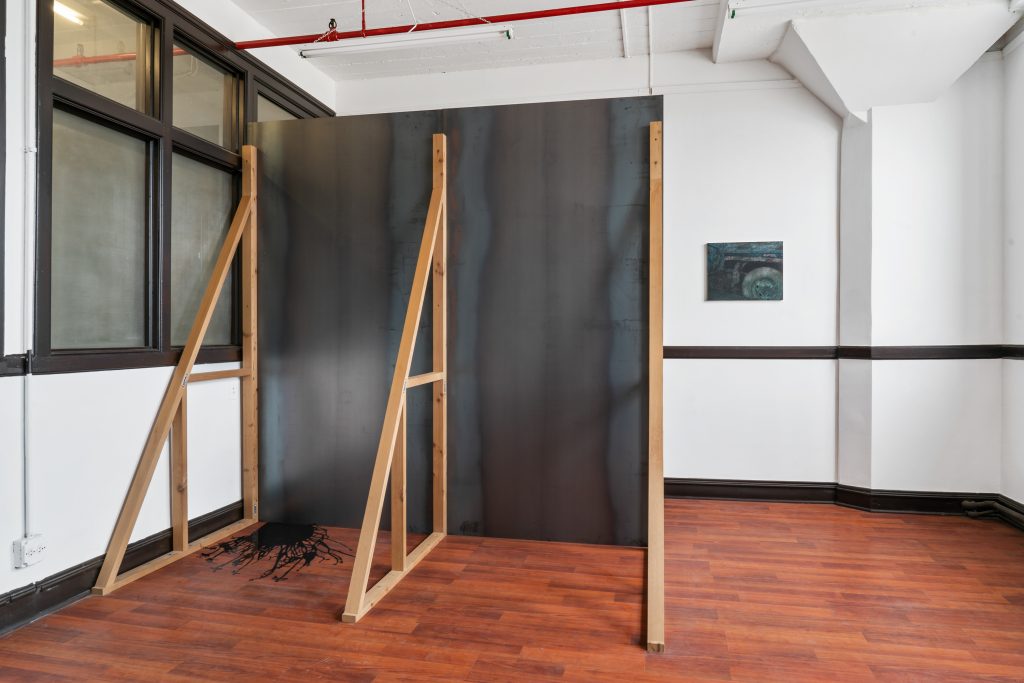 “Lying down is never the end, the last word; it’s the penultimate, and there is too much risk of being rested enough, if not to get up, at least to roll or crawl. To stop someone from crawling, you have to put him in a hole, plant him in a jar where, no longer able to stir his members, he will, however, stir some memories.”

A deep crevasse entraps and impels the metaphysical in Apparatus Project’s two-person exhibition “Maw.” What can be said about Chicago-based Elena Ailes and Quito-Frankfurt-based Antonio López doesn’t match the experience of being drawn into a synesthetic encounter between a face-down cast-aluminum shelf born from its incinerated cardboard double, and two miniature chromogenic prints of a car aflame at a demolition derby, west of Albuquerque, in October of 1977.

Large-scale sculptural interventions, enigmatic objects and quiet oil on panel and canvas works mingle within the architecture of the galleries, providing a neverending outline of our human struggle with mortality. Emotions and feelings oft-relegated to the private breed within the bacterial in a two-room presentation where Ailes and López traverse a multifaceted range of human-non-human, spiritual-banal experiences (for lack of more nuanced categories). Speaking with curator and co-director Gareth Kaye, indicates that the artists’ and gallerists’ atmospheric concerns seem shared. As Ailes and López punctuate and suffuse the space with pasts, Kaye too approaches the gallery and its program as “an atmospheric pressure chamber—setting the right temperature and humidity for the right condition to unfold between strangers.” In building space for the improbable and unpredictable, Kaye’s propensity for the unknown is a healthy indication of the enigmatic pairing of works that go on to compose “Maw.” 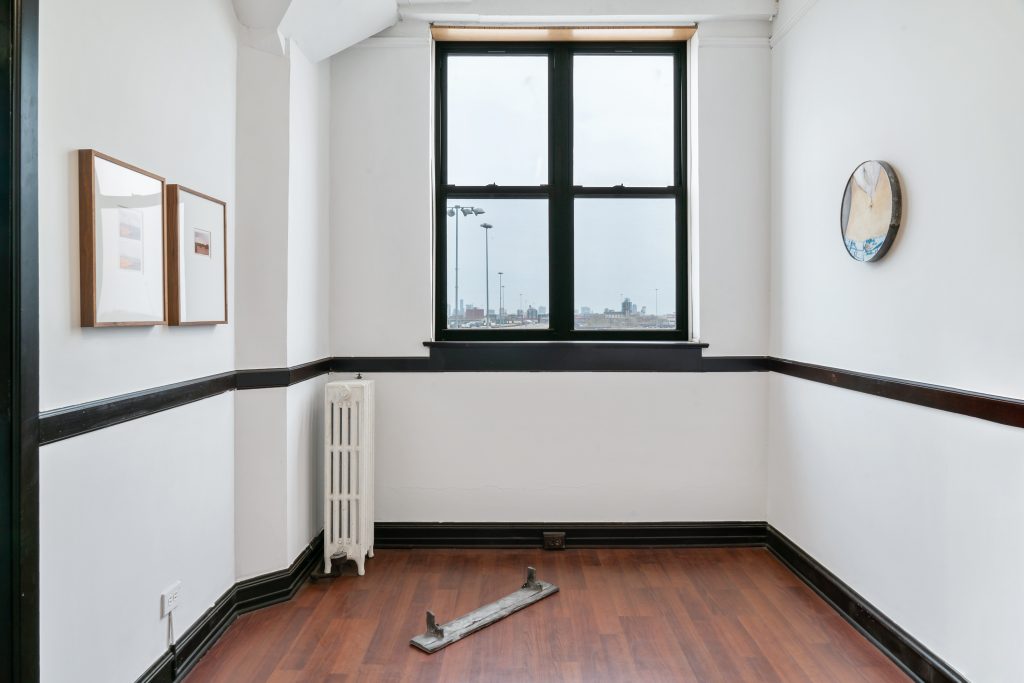 Viewers pass through “Untitled (wall),” 2020/2022, a collaborative sculpture and darkened corridor of cold-rolled steel, setting the tone for what’s best described as the weight of the exhibition. At the end of an egress, López’s, “Untitled,” 2022, is an oil on panel that depicts a truck tire with a mudguard in washes of green-gray-blue, similar to the ersatz wall. Supernatural transmissions emanate through tarnishing steel supported by three obtuse triangular cedar armatures, piercing the gallery’s central floor. At the lower bottom corner, an infinitely dark void of an oil slick advances. The silhouetted arms of the euphorbia milli (commonly known as a “crown of thorns”) bloom. They reach and point in the direction of López’s video “Solario,” 2022, playing on a Sylvania 6520 FDE TV diagonally across the floor.

In an eighteen-minute loop, López encounters a decaying corpse of a humpback whale while walking the endless shoreline of Cañaveral, a village along the Ecuadorian-Pacific coast. The wooden floor responsibly carries the weight of grave concerns, as López’s camera traverses the sinew and gristle of mammalian tissue. A missing chunk of flesh, exposed ribs, and disintegrating blue-stained skin reminds one of the threshold between living decay and the process of autolysis post-death. As the unexamined substance of the mammal is captured in Baconian compositions, the body self-destructs before the viewer, forcing us to confront our inescapable discomfort with death as a phenomenon integrated with life. Ailes’ crown of thorns also performs a summoning of melancholia through the blackness of bile, a recurring motif within her work. Judith Butler once differentiated between mourning (in death) and melancholia as “the melancholic refuses the loss of the object… the ambivalence felt toward the object requires the object be retained until differences are settled.” It seems futile to opine over the loss of the vitality of the monumental mammal, but it does feel necessary to accede to holding onto objects in the aftermath of death.

Perched directly above the Sylvania, atop a window frame overlooking the city skyline, Ailes’ “titled maw,” 2021, offers further insight into the traumatic cycles of nature. Once having witnessed a young hawk devour a tiny sparrow on my balcony, I’m reminded of their offering—a beak split in two—wedged between mossy wooden planks. A message from the other side. López and Ailes speak of the otherworldly through mammalian and animal parts as reminders of feelings and experiences beyond our own. “It’s a kind of inorganic, object sympathy that makes me aware of how I process feelings in my own body,” explains Ailes. Across the window, a diminutive oil painting of partially redacted white flowers leans on the ledge of a mesh window. Redacted squares conceal and integrate lost subjects into the grays.

In the second gallery sit a pair of feminine totems carved of Georgian cedar. “Venting spleen” and “have faith in wordless knowledge,” 2022, shoulder personal artifacts from Ailes’ life and body. Ranging from an impression of the inside of her squeezed fist, to a scaled cast of her vaginal cavity, to a watercolor painting of a cigarette butt found while cleaning her mother’s property months after her passing, to a driblet tipped sepal-shaped lead form; each fragile component comes with an unspoken confrontation to the lingering sadness that remains in the process of identifying with loss. Ailes says that the lead slag arose from a Nordic divination ritual: “Molten lead is thrown into water during the winter solstice in order for the individual to read a prediction of the year ahead.” Facing loss at the precipice of a pandemic, Ailes’ desire to locate grief beyond the body parallels a process of delayed identification. “I felt like I needed forty wailing women following me everywhere. Some days, maybe ten, other days—I just needed two.” Raised in a back-to-the-land community in Placitas, New Mexico, her grief “became landscape,” mirroring the view of Las Huertas from her childhood home at the tip of the Cibola National Forest. 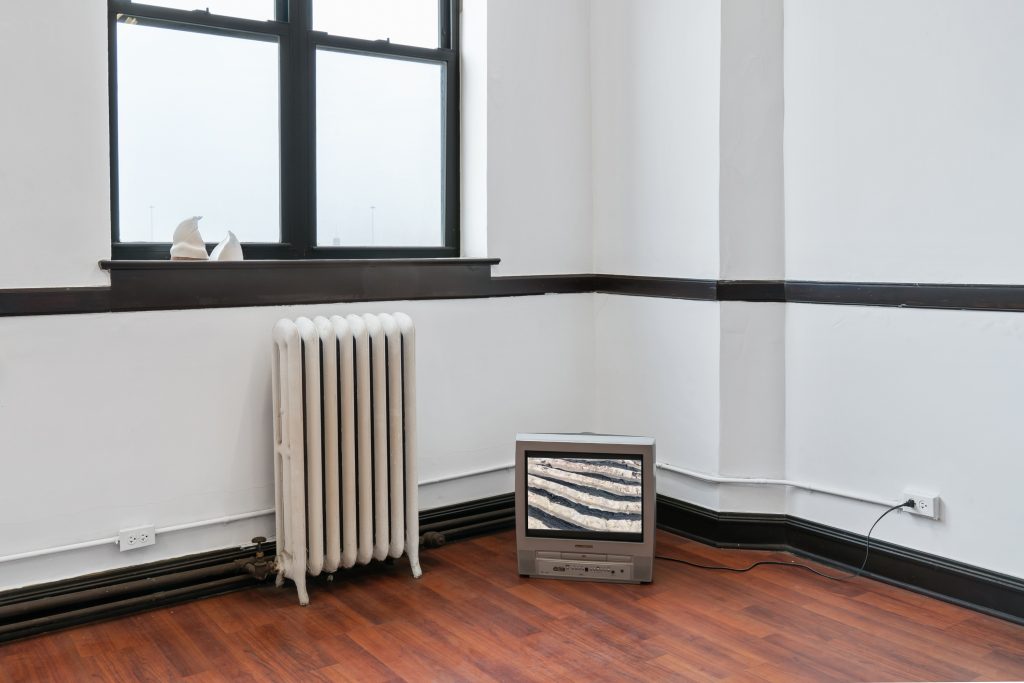 “Untitled,” 2022, an oil on canvas configuring white fractals sits opposite Ailes’ totems. Exchanging frequencies from wood grain to oil, Kaye reads the piece as “an ascension” drawn from the microscopic view of the inside of a diamond. Within this constellation, López’s paintings tackle the shackles of the real and mythic, as he speaks of the exacting forms of nature. “They are forms of self perpetuation that expand based on their own principles. The mystical, the holy—these are all self-replicating… a bit like religion. Everyday encounters of pure geometry.” While the selection of paintings may appear disparate, they connect through the anticipation of refusal, denying any local specificity or cultural markers. On the other side of the wall behind the white painting lies “Desk,” 2022, an oil-on-panel matched in scale, beholding an image of an empty office with vacant chairs and a desk where a diamond necklace rests unattended, on a velveteen bust. López considers his paintings to be part of a larger constellation, “while objects have their own self-perpetuating tendencies, there are other forces—capital, transactions, politics… Nothing is in a steady flow. Other forces get in the way.” Speaking of the separation between realms, between the local and non-local, material transmutations lend themselves to the intertextuality of “Maw,” creating a flow of ideas that slip between Ailes and López.

Burrowing through the exhibit “Untitled,” 2022, is set up as a “light at the end of the tunnel,” says López. A poignant moment in the life of an adolescent “set up as a star,” the oil on canvas sits within a handcrafted metal-ring frame. The circular landscape of a belly button with a needle connotes the slowness of time between the messianic and mundane, where the subject is conceived through its metaphoric context. Across, a pair of chromogenic prints “like a peach split in half, like a window blown free of its sill,” 1976/2022, and the singular “terminus post quem terminus ante quem,” 1277/2022, are framed in the warmth of walnut. The photographs were retrieved from Ailes’ mother’s archive of a demolition derby, stretching the event of bursting into flames. The staggered photographs, moments apart, point to the temporality of trauma and grief. In a Derridean sense, if the process of grieving is “interminable,” Ailes’ works offer no resolution except for continually metabolizing that which is lost.

The experience of and the telling of an experience connects through a chimeric string that tugs at the cognizance of the beholder. In López’s “Untitled,” 2022, a discreet goat eyelid is fixed atop the corner of a radiator. Lopez says, “It’s hard to imagine people use goat eyelids as cock rings. Something that used to be integral to the eyesight of another animal now hosts human genitals instead… it’s a perverse object.” In its careful reanimation, expanding through the moisture of the radiator and closing due to atmospheric dryness, López’s intervention is a disquieting extension of life in absentia, an enigma that omits an unchaste relationship between man and animal.

Ailes and López’s installations, images and sculptures function as a cosmos of life—worlds where the viewer is placed in a disordered exercise of cognitive sense-making between rather than sense-making of. What is presented and draws one in, is also what continually recedes, taking you with it. Longer cycles of time, the unstoppability of nature, the fecundity of reproduction and the rejection of the externalized gaze, ask viewers to take a closer look at what they identify with and conversely, what they reject. As an exhibition of pure, unmediated, honest expression, “Maw” is an intimate Petri dish, a world built around biological kinship rather than ossified knowledge, where it is important to forget the all too familiar order of things in order to embrace the unperceivable. (Pia Singh)