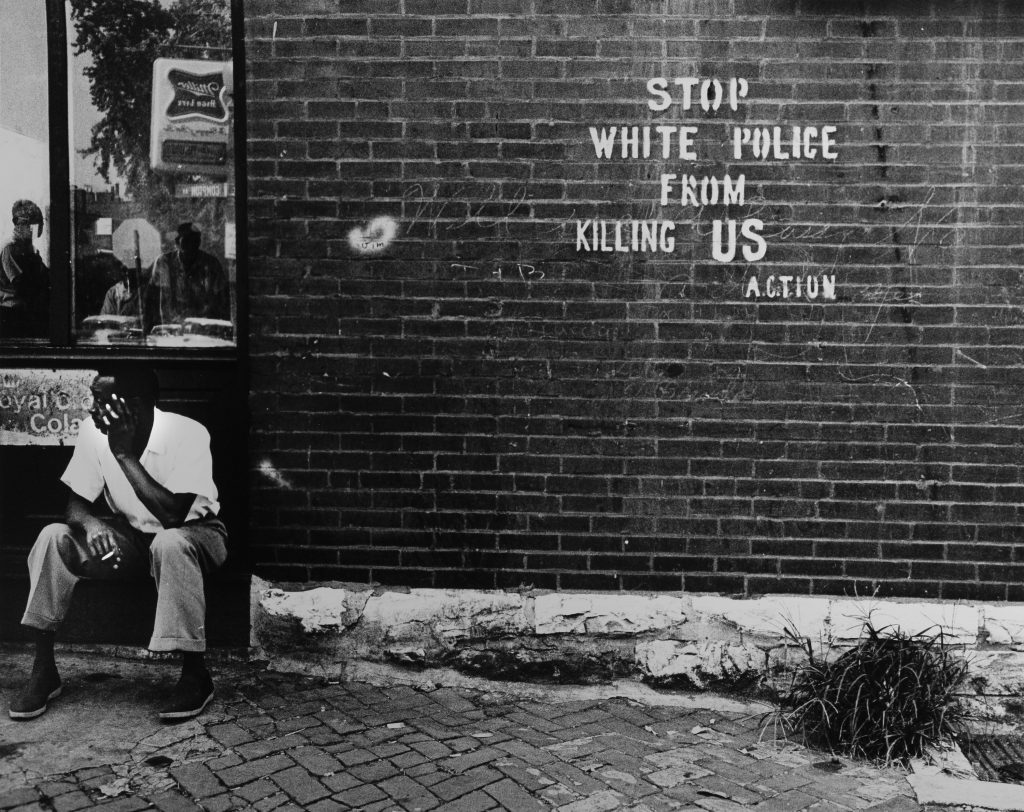 There is power in image-making. Culture is shaped by the stories that it tells about itself—and who gets to record those stories, and how they record them, have undue influence. “A Site of Struggle,” on view at the Block Museum, tackles this conceit head-on, with a concise historical exhibition of artists who have grappled with representing and responding to anti-Black violence.

Curated by Janet Dees, the Block’s Steven and Lisa Munster Tananbaum curator of modern and contemporary art, the exhibition brings together work by over thirty artists and activists, dating from the 1890s to the birth of the Black Lives Matter movement in 2013. In a video interview, Alisa Swindell, a former curatorial research associate at the Block who assisted with the show, says she was drawn to working on the exhibition because of the importance of showing audiences that the struggle against anti-Black violence is nothing new. “There have always been people in the fight,” she says. “And many of those people have been artists.” 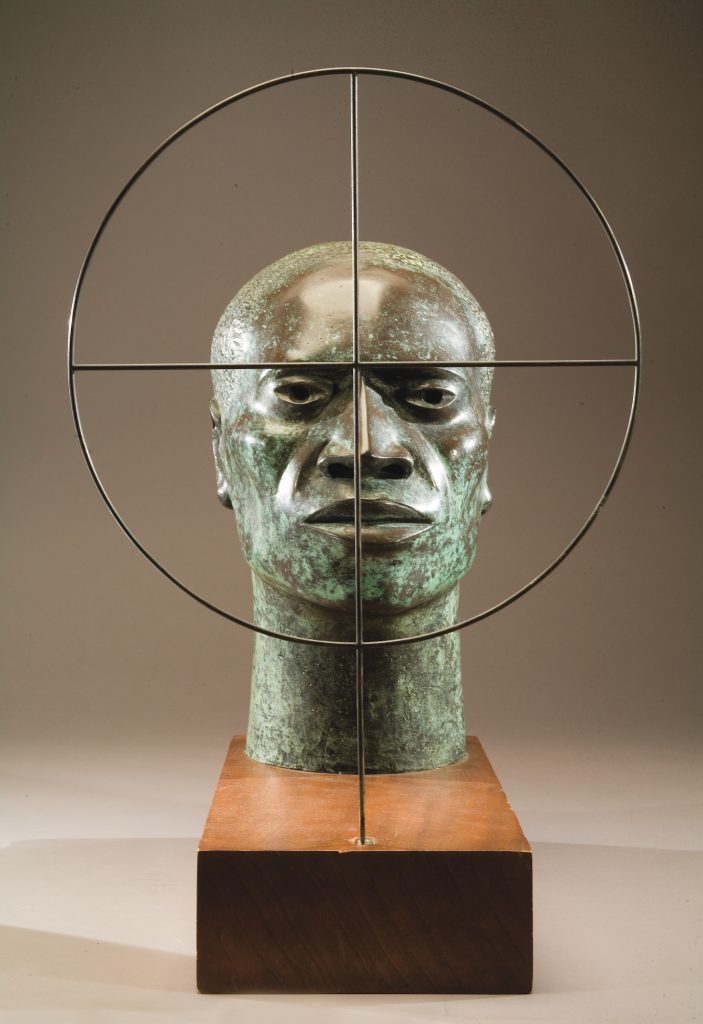 Rarely have I been to an exhibition as thoughtfully planned out as this. Being mindful of the heavy subject matter, the museum has set up seating areas throughout the show, separated from other visitors by screens. There is a reflection room for quiet contemplation, with an accompanying guided meditation, a resource area with more information, as well as an opportunity to leave comments, and a self-care guide made for Black visitors. It has installed signage to indicate graphic subject matter, and has worked to put this material out of sightlines for those who may not wish to view it. 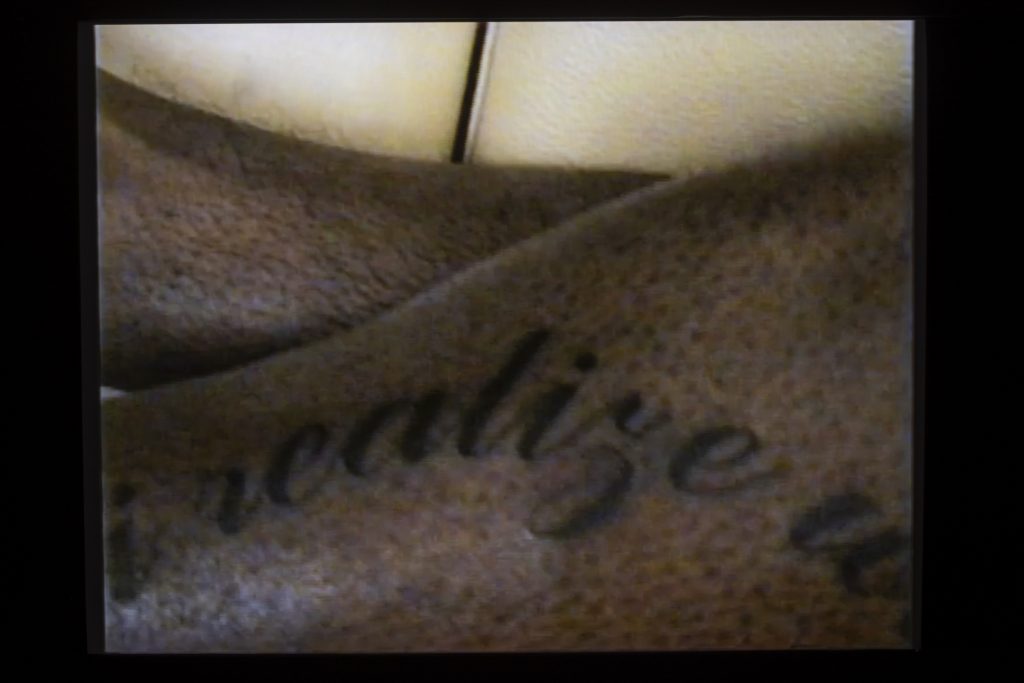 The most challenging visual work is set apart in its own room. Titled “A Red Record,” after a 1895 anti-lynching pamphlet by Ida B. Wells, the section is the only place where violent acts, including lynching, are depicted visually. It is in this room that Pat Ward Williams’ “Accused/Blowtorch/Padlock,” is displayed, one of the most powerful pieces in the show. Williams got the idea for the work while looking at an issue of Life magazine from 1955. One page contained a nearly contextless black-and-white photograph of a brutalized Black man in a wooded area, chained to a tree, his arms tied with a rope behind his back. The photo was creditless, but the caption made the artist pause. It read: “Death slump at Mississippi lynching.” But the magazine photo did not show the man being lynched—it showed him after having been burned with a blowtorch, likely about to be lynched. The caption, by carefully saying very little, hints at a lot—like the fact that lynchings were public spectacles of violence, with people routinely tortured and beaten before being hanged, that the onlookers were often also active participants in the violence.

Williams has installed the ripped-out magazine page in one part of a horizontal wooden frame; the frame resembles a four-paned window or door. The other three panes are filled with zoomed-in details from the photo: the unnamed man’s bound hands, his burned back, his chained torso pressed to a tree. Williams has rewritten the caption, with an emphasis on the actions of the mob: “Accused in 1937 for murdering a white Mississippi man, this Black man was tortured with a blowtorch and lynched.” The window is mounted on black tar paper, on which the artist has written out a response to seeing this image, mostly a series of increasingly incredulous questions: “WHO took this picture? Couldn’t he just as easily let the man go?” Another question, “Can you be Black and look at this without fear?” asks astutely why Life magazine would publish such an image. For the artist, it reads as a form of social control. To flip a general-interest magazine page, such as Life, and see, nestled amidst advertisements for angel-food mix and an article on the Shah of Iran’s Miami Beach vacation, an image of horrific violence against a Black person is to normalize that image. In such a context, it serves to desensitize a white reader; for a Black reader, it could only be read as a warning.

As the exhibition makes clear, images of violence against Black people are nothing new. In 2020, the excruciating video of George Floyd’s breath being taken out of him was broadcast around the world. In the last century, lynching photographs and postcards were common—white people would pose for pictures in front of the murdered person, like hunters showing off their prey. Today it is increasingly common for social media users to ask others not to share graphic images after incidents of anti-Black or racially motivated violence. These images can be triggering and retraumatizing. It’s often unclear what the impetus for sharing such images is, for turning Black pain, or death, into another image to be consumed. Clearly broadcasting such images is not working to end racism, or convince racists that anti-Black violence is real, is vile. (Data from 2021 shows that out of the 1,055 people shot and killed by police last year, twenty-seven percent were Black, though Black people are just thirteen percent of the population; in 2021, Black people were twice as likely as white people to be shot and killed by police officers.) As Williams implies in her piece, which brings the Life photo back into circulation—context is everything. She makes the argument that it is appropriate to reproduce such an image if it is done thoughtfully—to raise awareness, to contextualize current-day violence, to implicate the viewer in idly consuming racist violence.

Importantly, most of the artworks here do not reproduce such images. The museum stresses, in its didactics, on its website, and in an informational video at the conclusion of the exhibition, that the important work of learning our nation’s history is not done solely through graphic images of violence. Many of the artists here use subtle methods or abstract compositions to represent both anti-Black violence and the resistance to that violence

“Heirlooms and Accessories,” a 2002 work by Kerry James Marshall, depicts lynching in a less obvious light. In three oversized inkjet prints, Marshall has taken a 1930 photograph of a lynch mob in Indiana, and homed in on the faces of three individual women who have turned to face the camera. Marshall has enclosed their faces in ornate frames at the end of necklaces. The artist is implicating them as accessories to the crime at hand, while also referencing the familial and societal values—white supremacy among them—that get passed on, generation to generation. 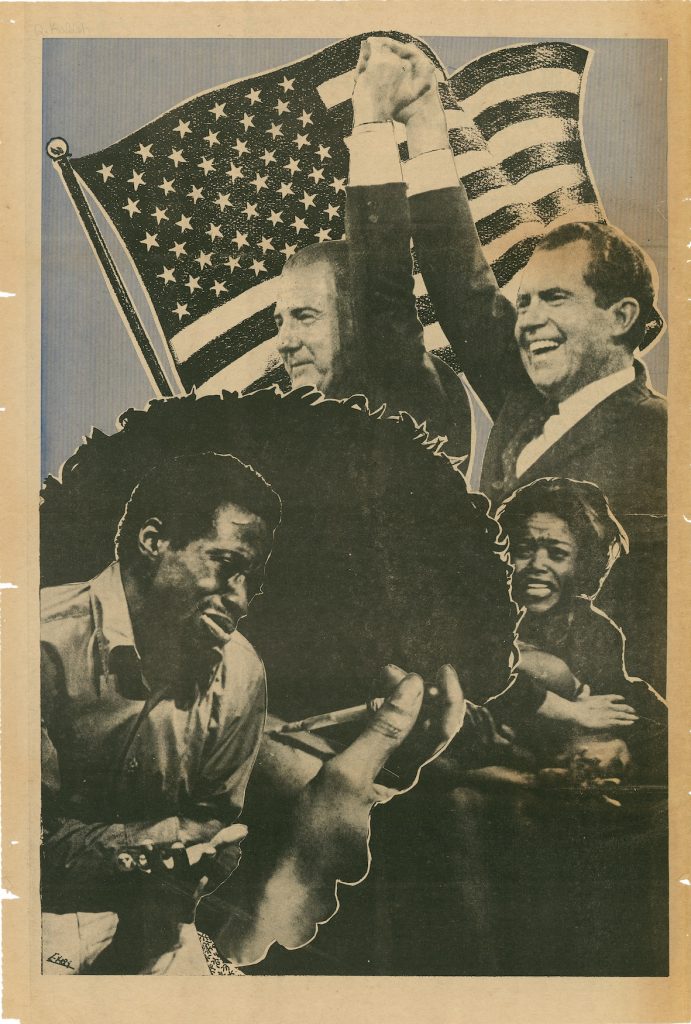 Many of the works on display have an explicit Chicago connection, from the inclusion of works by Marshall, Theaster Gates and Chicago-affiliated artists like Elizabeth Catlett and David Antonio Cruz to the photographs by Bob Crawford and Darryl Cowherd depicting 1960s neo-Nazi protests on the South Side to the historical materials on Ida B. Wells. The local connections, one hopes, help viewers understand the city’s history with racial violence and anti-racism organizing and how that history has an impact on civic life today. The exhibition makes plain that anti-Black violence has deep roots in this country. As Northwestern history professor Leslie Harris, who was an advisor on the exhibition, posits in a video by the Block, the reason that freedom became such an appealing concept for Americans is because of its history of slavery and other forms of bondage. She notes that the societal understanding of freedom, the belief that no person or group of people should be enslaved, is a relatively new one, and is an idea that is still being developed. “A Site of Struggle” helps visitors consider such ideas anew.

The works on view serve to memorialize the many lives lost, allowing space and resources to mourn those individuals, and to process both the dark histories of the United States as well as the bold acts of resistance. One hopes that the exhibition moves visitors beyond rage or grief or empathy into action. The Block’s website offers ideas on how to get involved in anti-racist community building work, and its resource area offers a wealth of information on racial history, which is ever more important to learn as history remains under attack in the United States. This is one of the most powerful things art can do: ask us to reconsider history, learn more, and inspire us to get involved in remaking the world. “I think that it is important to not shy away from things that make us uncomfortable,” Swindell says in the exhibition video. “If we only deal with the things that are pleasant to us, the things that are pleasurable, the things that are pretty, then we lose the power of what art can do. And we lose our chance to learn what has come before and to learn what we need to know so that hopefully we can do better in the future.” (Kerry Cardoza)

“A Site of Struggle” is on view at the Block Museum of Art, 40 Arts Circle Drive, Evanston, through July 10.